Last month I reviewed the Sanyo Xacti VPC-HD1, a hybrid still/HD video camera. I was impressed by its unique abilities, especially its HD video mode, as well as its futuristic style and exemplary build quality. I was less impressed with its price. £540 for a five megapixel camera is a lot of money, especially since the still picture quality was below average.


This week I’m taking a look at its junior sibling, the sleek and rather lovely VPC-C6, which shares Sanyo’s ambitious hybrid still/video design ethos. It lacks the HD video capability of the HD1, but does offer VGA MPEG-4 video with stereo sound, as well as six megapixel still images and does so at the slightly more realistic price of £294.95.


Sanyo hi-fi systems, perhaps unfairly, have a reputation for being a bit cheap and nasty, so it’s surprising to see the same brand name on this beautifully designed and well engineered product. The C6 looks like it’s been stolen from the set of a particularly stylish high-budget sci-fi movie. The temptation to flip the screen open, tap a few buttons and say “beam me up, Scotty”, or wave it over someone while making Tricorder noises, is almost irresistible. Or maybe that’s just me… ”(nope… I’d do that too.. ed.)” 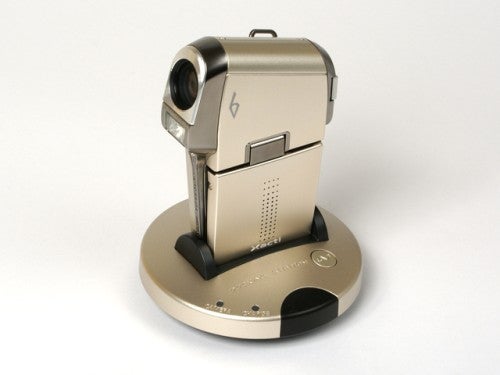 Geeky fantasies aside, the C6 is certainly an impressive little gadget. The body is made of aluminium alloy and finished in an attractive champagne-gold colour with gunmetal and chrome details, although a black version is also available. The f3.5-4.7 6x optical zoom lens is quite a lot larger than on most comparable compacts, and the 2in flip-out LCD monitor has 210k pixels for above average sharpness and a good anti-reflective coating for use in bright sunlight. Build and finish is excellent and the whole thing looks and feels like a real quality product. The overall design has that finished look of a third-generation product, which in fact it is.


While the pistol-grip format may not appeal to everyone, it is a good compromise between the camera’s dual functions. It is actually quite comfortable and easy to hold steady in still mode, and also to move about smoothly for video shooting. However it is worth noting that left-handed people could have a real problem with it. 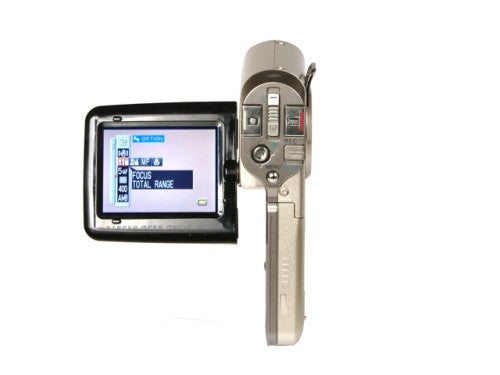 As with the HD1, the position of the controls takes some getting used to. All the controls are mounted on the back of the camera, and are operated with the thumb. There are two shutter buttons, one to shoot a still picture, the other to start filming a video clip. Between them is the zoom control, which is one of the nicest I’ve found on a digital camera. It is designed for video shooting and has a variable speed action; the further you move the slider, the faster the zoom moves. The zoom is stepless, so it is easy to accurately frame pictures as you shoot.

The only other controls are a switch to select between record or playback, a menu button and a small joystick for menu navigation. The joystick has secondary functions including exposure compensation, flash mode, focus mode and AF lock, although these are not labelled on the camera. This is one camera where it really pays to read the manual.


The menu system controls everything else, and that includes most of the usual options. Choices are sensibly laid out and divided between basic, advanced and setup menus, and include scene modes for sports, portraits, landscapes, night scenes, fireworks and lamplight. There are a few digital effects filters for monochrome, sepia and ‘cosmetic’ mode for enhanced skin tones. Advanced features include spot or five-point focusing, spot or matrix metering, ISO setting and white balance. It also includes image stabilization, a very useful feature for a small, light camera with a big zoom lens. 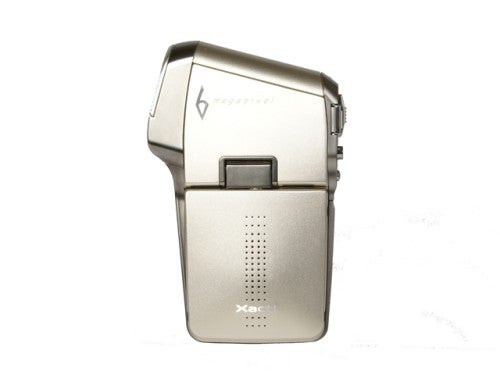 The image stabilisation system is purely electronic, the type of system commonly used in video cameras. In operation it cuts off a margin around the edges of the frame, sacrificing it to keep the centre portion of the frame steady. When the IS system is active, a border appears on the monitor screen to indicate the edges of the recorded image.


Focusing is about average for a compact zoom camera, taking just under a second to lock on in good light. However low light performance is a bit disappointing. The C6 has no AF illuminator, and had difficulty locking on where other cameras had no problems at all. 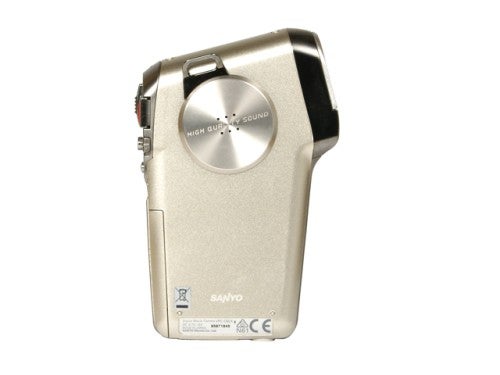 Battery duration appears to be above average, especially considering that the C6 is powered by a small 3.7V 720mAh lithium-ion battery, which appears to be the same as the one found in most of the Pentax Optio range. I charged it up last week, and have used the camera quite a bit since then, but it’s still reading as full. As for memory usage, a 1GB SD card provides enough room for 508 images at maximum quality, or over 41 minutes of SHQ video.


The main weak point here is the flash, which is hopelessly under-powered. It has a stated maximum range of only 1.2m, which is the weakest I’ve ever seen. It’s so woefully inadequate it’s barely worth even switching it on.

A quick mention must go to the voice guide system. Whenever you change a function, a pleasant mid-Atlantic female voice announces it for you. Switch it on, and it says “Camera mode!” in a cheery, keen-to-help sort of way. Close the screen and it says “Standby mode!”. Leave it switched on too long and it tells you “Going to sleep now.” Most people will find it infuriating after a few minutes and turn it off in the menu. Personally I found it quite charming and left it on, which worries me slightly…


The C6’s video mode is outstanding, shooting in 640 x 480 resolution at 30fps, and producing picture quality comparable to a good digital camcorder. Played back on a large screen TV the picture is sharp, colours are bright and clear, and despite the stereo microphones both being mounted on the back of the monitor panel, the sound quality is excellent with a distinct stereo effect. 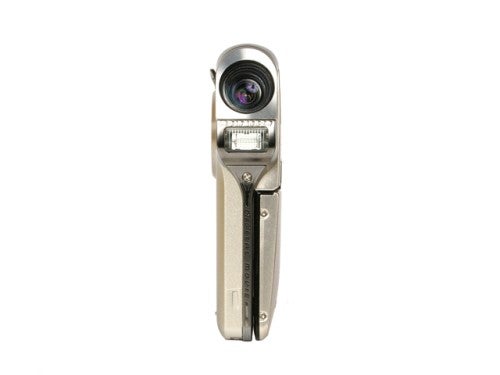 Unfortunately the still image quality was not quite up to the same standard. Although colour rendition, exposure and focusing were all excellent, the camera’s image processing engine is not as good as it could be. The image noise reduction system is crude by current market standards, and robs images of a lot of fine detail while adding artefacts especially at high-contrast edges. At around 1.5MB per shot, images are also heavily compressed even on the highest quality setting, which adds further problems with compression artefacts. The end results simply don’t compete with other cheaper six megapixel camera on the market. 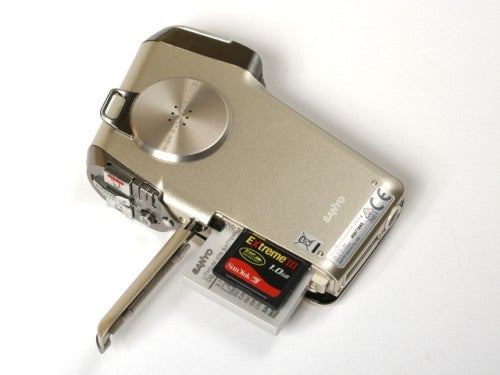 It’s a real shame, because the C6 is a great looking gadget, and has some genuinely outstanding abilities. It is well made, well designed and not unfeasibly expensive. If only it took slightly better pictures it would be perfect.


The Sanyo Xacti VPC-C6 is great looking toy for the gadget lover; well made, well designed and easy to use, as well as being a very capable video camera in its own right. It is unfortunately let down by still image quality that doesn’t match up to the large number of other less expensive six megapixel cameras with which it is competing.

”A range of test shots are shown over the next three pages. Here, the full size image has been reduced for bandwidth purposes, and a crop taken from the original full resolution image has been placed below it in order for you to gain an appreciation of the overall quality. The following pages consist of resized images so that you can evaluate the overall exposure. For those with a dial-up connection, please be patient while the pages download.” 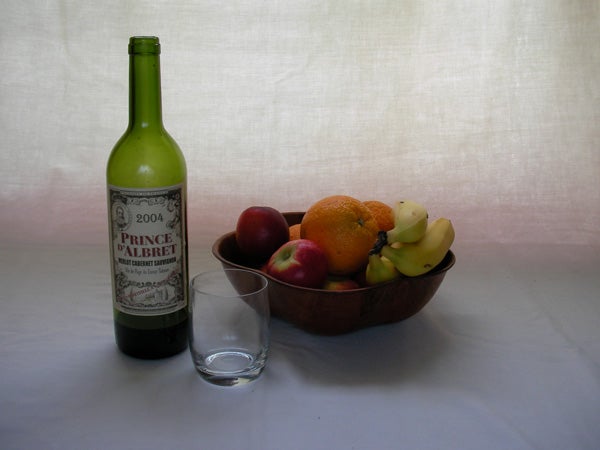 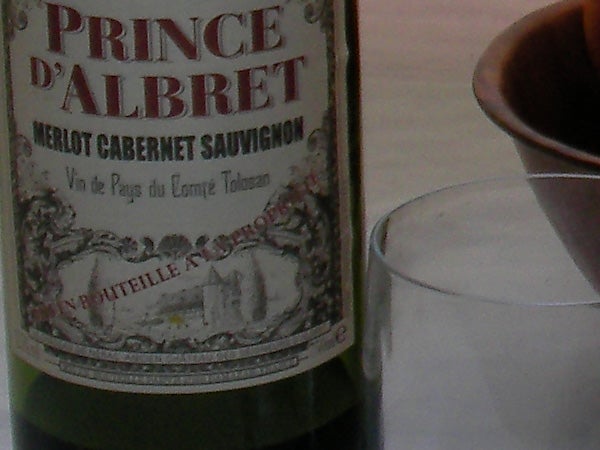 At the lowest ISO setting, the image quality is as good as its going to get. There’s no image noise as such, but there are compression and processing artefacts plainly visible. 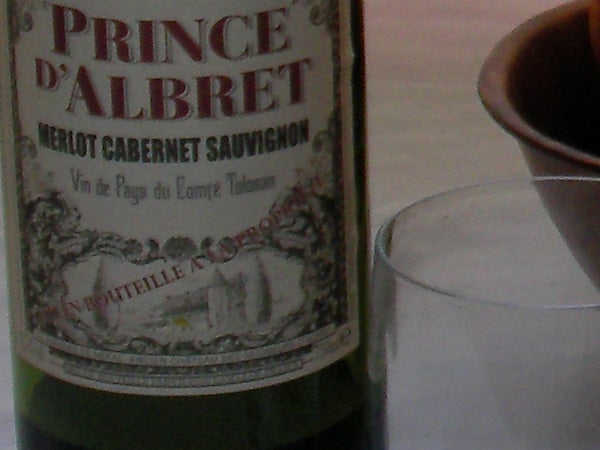 At 100 ISO the image is still largely noise-free, and the image is virtually indistinguishable from the previous one. 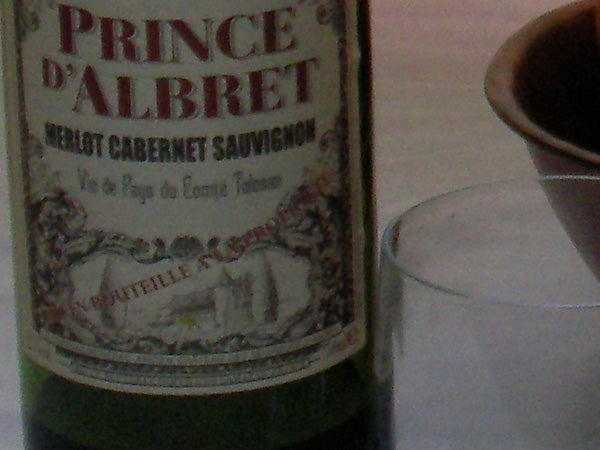 At 200 ISO there is now visible image noise in the mid-tone areas of the image, although it is fairly well controlled. The processing artefacts are more noticeable though. 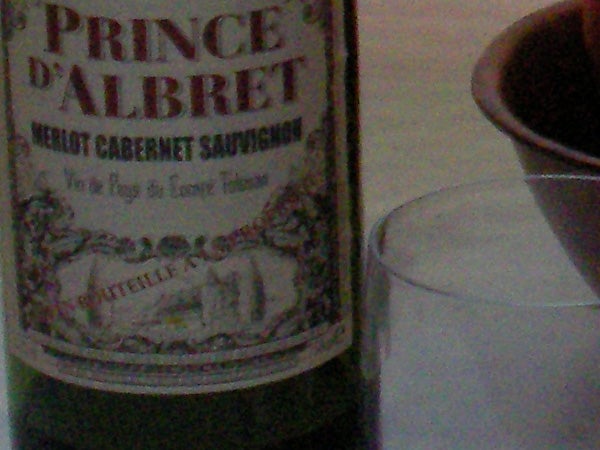 At the maximum ISO setting the image is now very noisy in all areas, and colour fidelity is starting to suffer. It would be best to avoid this setting. 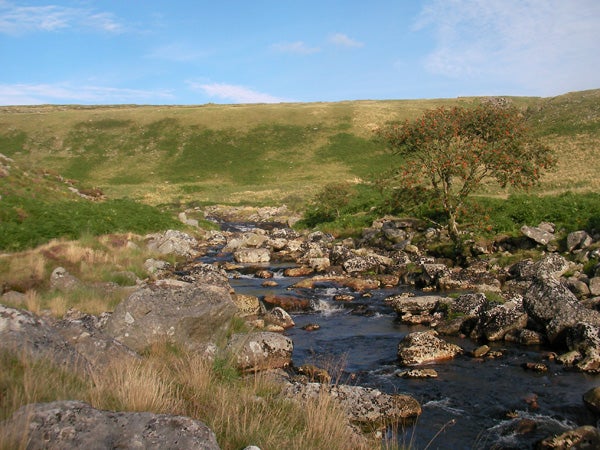 In good light, the C6 is capable of producing a perfectly adequate snapshot, although zooming in a little reveals a serious lack of fine detail. 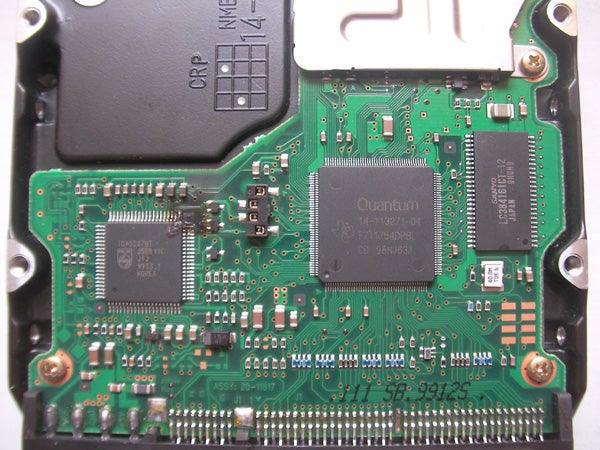 In Super-macro mode the C6 has a minimum focusing distance of 1cm. In normal macro mode, it’s about 10cm. 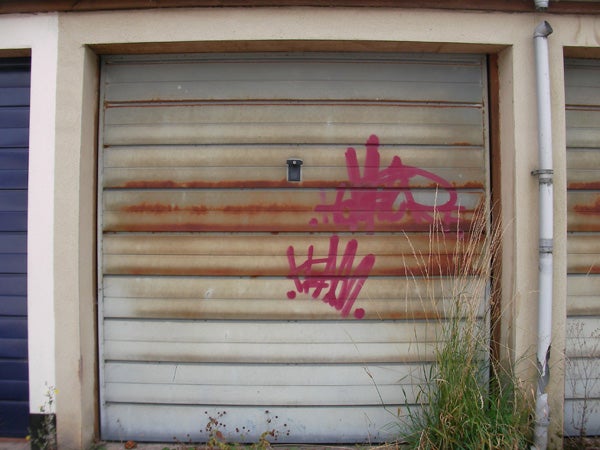 At its widest setting the C6’s lens does produce some quite severe barrel distortion. 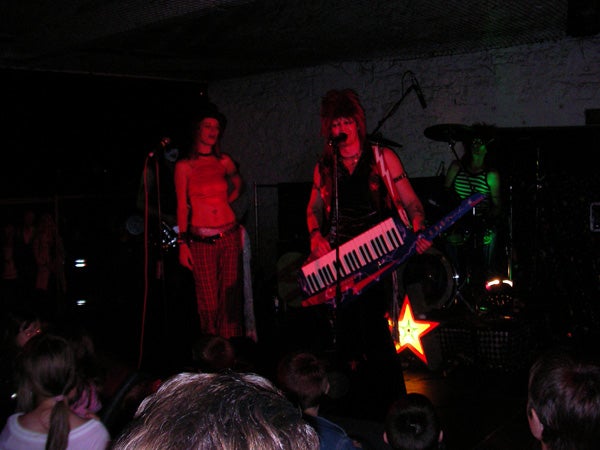 The C6 has the weakest flash I’ve ever seen, with a maximum range of just 1.2m. If you’re standing up, your feet will be out of range. 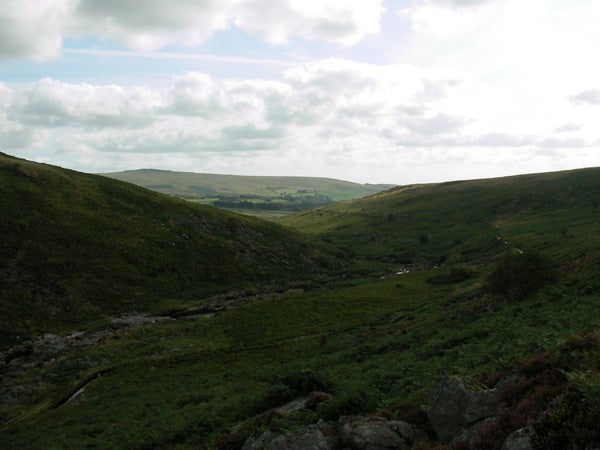 The wide end of the c6’s zoom range is equivalent to 38mm, about average for a digital zoom camera. 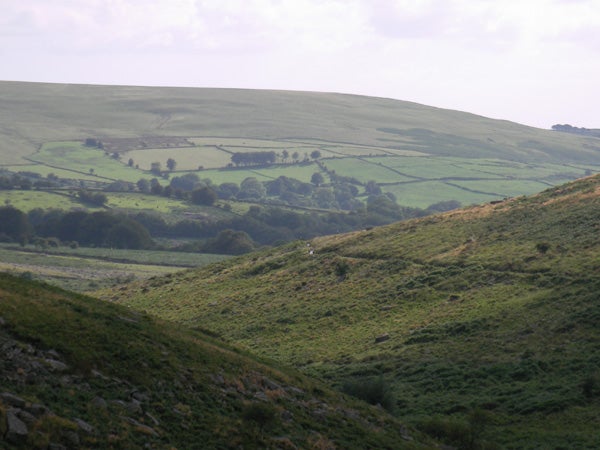 Taken from the same spot as the shot above, this demonstrates the telephoto end of the zoom range, equivalent to 190mm.