What do Steven Fry, Elton John and the guy who played Sam Gamgee in the Lord of the Rings have in common? The answer is that they could be part of the reason why Orange’s 3G network coverage is so poor. During testing of the Sanyo S750, I had great difficulty getting a steady 3G signal in the three main locations I was in, namely at home, in Hertfordshire, in the office, in Ascot and believe it or not, in central London. My thinking is that if Orange had invested the money into getting its 3G network right, instead of paying celebrities huge sums for ads, it might have a more reliable network.


These issues certainly made it difficult for me to come away with a positive impression of the S750, Sanyo’s very first phone for Europe. As a first effort, it’s not too bad, though it has to be said straight away that the large aerial is a real turn-off in the style stakes – and it certainly didn’t seem to improve reception. 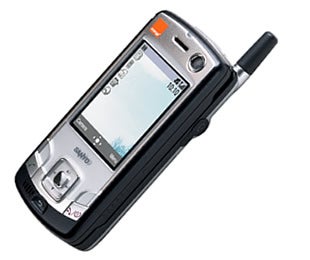 What’s immediately noticeable about the S750 is its large screen, which totally dominates the front. It’s an impressive 2.4in diagonally, the largest I’ve ever seen on a mobile phone. It also sports QVGA resolution and 262,144 colours and for looking at pictures and navigating it’s one of the best screens around.


The design is also notable for the fact that there’s no number pad immediately visible with a central key surrounded by four directional keys and two keys either side sitting underneath the screen. The number pad in fact slides down from underneath the phone when required. However, it’s rather awkward and can’t easily be done one handed. It also makes the phone rather thick, and at 108 x 50 x 22 mm and 122g, it’s not the smallest phone in the world. It will definitely make its presence felt in a jeans pocket. The silver finish on the front is smart but the rest of it looks dull and it has a bit of a plasticky feel to it.


Navigation is straightforward. Down the left hand side of the screen are five icons that provide access to the address book, call list, messages, a schedule and a link direct to the Orange World home page, which (theoretically) provides access to the 3G services. Press the menu soft key and you get the usual arrangement of icons to choose from. The interface is functional and speedy but a little on the drab side, with no animations, which is not what you’d expect from a supposedly cutting edge phone.

There are two cameras in the S750, one on the front and one underneath, though the latter only becomes active when you slide out the keys. This is a decent 1.3 Megapixel CMOS chip enabling it to capture still images up to 1,280 x 960 which makes it a bit more worthwhile than most camera phones. The large screen really helps you see the extra detail. The camera boasts a timer, and a flash and a 4x digital zoom as well as some ‘fun’ special effects such as sepia and negative. The front lens sits in front of a 310k pixel CCD for capturing video up to 176 x 144 at 15 frames per second in 3GP format. 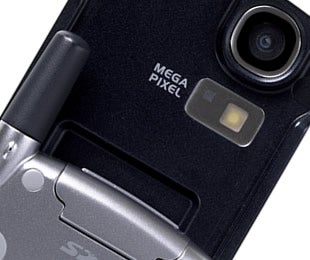 For expansion on the 8MB of built-in memory, the phone sports an SD card, which is useful for video downloads and MP3s. There is a built in media player and you can drag and drop MP3s onto the SD card, but I discovered that you had to format it in the phone first before it would recognise tracks. Even then I could see no way to skip between tracks in the media player so it’s not exactly going to replace an iPod any time soon. The tracks did sound good on the supplied earphones at least. The audio port on the phone is an extra small ‘micro-jack’ if you will, so you can’t use your own headphones, and while the supplied ones do have a button on the cord, I couldn’t get it to do anything. The phone will interrupt your music playing when you receive a call, though you can turn that feature off if you don’t want to be disturbed.


The S750 supports Bluetooth but it’s safe to say that it’s the oddest implementation that I’ve ever come across. Unlike the simple on and off setting I’m used to from Sony Ericsson; you have to put the phone into a ‘Ready to Receive’ state, which will time out, though this can be adjusted up to 300 minutes. When you make a call you have to connect first and only then transfer the call to your headset, which is a little odd. After trial and error I was able to receive calls in the headset directly, though for some reason I had to press the button on my headset twice. I have a Motorola HS850 and on my T630 I can just flip open the headset and it will connect to the phone and answer the call. This didn’t work on the S750 though, forcing me to have the headset on the whole time. I did manage to get it to sync with Outlook over Bluetooth, though the required Intellisync software isn’t supplied and has to be downloaded from the Sanyo web site. The phone also support USB transfers but likewise, the necessary cable wasn’t supplied.

Once I got used to the unusual layout, the S750 was satisfactory to use a phone. A video call to a mobile on the 3 network went smoothly and both parties could see and hear each other clearly. However, the main thing that people will get a 3G phone for and what Orange is promoting heavily in its expensive TV adverts is being able to download or stream videos from its Orange World homepage. As I mentioned at the start, this proved to be something of a trial. If seeing the words “Error, Connection lost to the Server” is your idea of a good time, then this is the phone for you. Despite the Orange web page suggesting I was in near an area of solid good coverage, it seemed that my house was situated in a 3G hole. And while the office was apparentely also in a 3G area, it only worked reliably outside. Often 3 bars would appear indicating a 3G signal only for it to drop to two just as the video download started, which proved annoying. This compared unfavourably to the Sony Ericsson V800 on Vodafone with which we had no problems getting a signal. 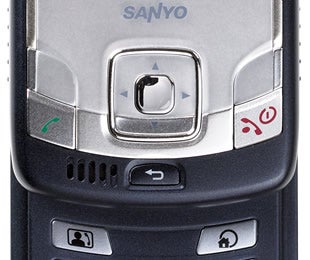 When I could browse Orange World I actually wasn’t bowled over by the speed, with pages taking just too long to load. The range of content was pretty good, with the usual mix of news, sport and movies. However, I was disappointed with the quality of the videos, which appeared small on the hi-res screen. You can enlarge them but then they just look very pixelated.


Even receiving calls sometimes proved a problem, with the phoned not ringing for no apparent reason. Orange alerts you to missed calls by sending you a text message and I was baffled to receive these when I supposedly had good coverage. Standby time is quoted as 260 hours, with 170 minutes talk time or 100 minutes of video calls. During testing though I found myself charging it every day.


The Sanyo S750 is available free on Orange right now on any pay monthly contract but though I’m in the market for a phone, I can’t say I’m tempted. The S750 has some good things going for it, such as a large screen and easy to understand interface but its cumbersome looks and Bluetooth quirks greatly lessen its appeal. But the problems I had with the Orange 3G network were the real deal-breaker leaving the Sanyo S750 well short of the 3G benchmark set by the Sony Ericsson V800.