Usually the products we review on TrustedReviews are brand, spanking new. But just occasionally we stumble across something that’s actually been around a while but has managed to catch our eye on account of it having undergone some serious price reductions.


Today is one of these ‘bargain bucket’ days, as our endless Internet trawling recently uncovered the remarkable sight of Sanyo’s PLV-Z5 LCD projector being sold online for barely £700. This same projector would have set you back a cool £1,600 when it launched back in March 2007. 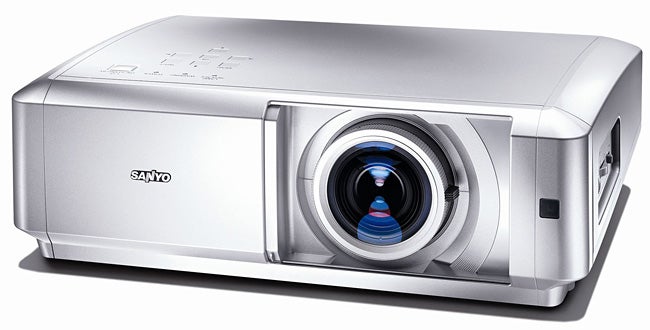 And yes, I really did say March 2007. For as a clear sign of the hard times Sanyo has been struggling through recently (it’s apparently about to become a subsidiary of Panasonic), the usual annual upgrade of Sanyo’s home cinema projection range doesn’t appear to have happened this year. Hence there’s no Z6, and the Z5 has been left flying the entry-level Sanyo projector flag, while the previously reviewed PLV-Z2000 continues at the higher end of the market.


The Z5 actually feels slightly dated right from the off, clad in a style-free, slightly flimsy looking silvery body that would frankly look more at home sat on an office desk than a domestic coffee table. At least its connections look pretty up to date, including a duo of HDMI inputs, and a duo of component video inputs. Such HD friendliness must really have been state-of-the-art at the time of the Z5’s first release.

However, while having two HDMIs still counts as healthy on a £700 projector, I do have to report that the HDMIs are not built to the v1.3 specification required by the Deep Colour format. Still, it’s not as if Deep Colour and its variants are exactly ubiquitous yet?!


Although it’s unlikely that anyone putting together a serious home cinema system will be interested in a £700 projector, I guess it’s still worth adding before leaving connectivity behind that Sanyo has provided the Z5 with an RS-232 control port.


As I’d expect for its money, the Z5 is ‘only’ HD Ready rather than Full HD. In other words, it’s got 1,280 x 720 pixels rather than 1,920 x 1,080, and so will have to rescale both standard and (most) high definition sources to fit its own middle-of-the-road resolution. So here’s hoping the projector’s video processing proves up to the job.


Other specs are very promising, as a high brightness rating of 1,100 ANSI Lumens rubs shoulders with a surprisingly hefty 10,000:1 contrast ratio. This latter figure in particular would again have looked like state-of-the-art stuff at the time of the projector’s original launch, and still holds up pretty well today.

Features within the Z5’s tidy onscreen menus aren’t particularly expansive by today’s standards, but that’s not to say there isn’t anything of interest. I certainly got good mileage out of a couple of well-judged gamma presets, for instance, and an unusually long list of progressive scan options. Plus there’s a solid contrast booster, and a system for improving the appearance of colour transients.


Getting the Z5 to produce a perfectly proportioned image on my screen proved winningly simple too, thanks in particular to an excellent vertical and horizontal image shifting system, a stonking optical x2 zoom, and digital keystone correction.

Obviously the $64,000 question as I settle down to watch the Z5 has to be whether or not its performance still holds up, given that the best part of 18 months have passed since it was first launched. After all, 18 months can be a heck of a long time in AV terms – especially when it comes to projectors.


The first thing to strike me is how pleasingly deep the projector’s black level gets. This was actually the area where I’d expected the passage of time to have had the most damaging effect on the Z5’s chances, but actually the darkness of Barbossa’s treasure cave in ”Pirates of the Caribbean” is rendered with much less of the usual grey murk than I’ve seen on even some much more recent sub-£1k projectors.

The respectability of the Z5’s black levels also helps the projector produce a surprisingly believable colour palette. Decent justice is done to the lush, fully saturated tones of animated fare like ”Ratatouille” on Blu-ray, while the subtle, varied and often low-lit skin tones of ”There Will Be Blood” are handled with the sort of accuracy that’s completely beyond most rival mega-budget models.


Yet more good news finds the Z5’s pictures looking strikingly free of video noise of any sort, be it grain, dot crawl, colour moiré, or whatever. This makes standard def material more watchable than is usually the case at this price point, while high def’s clarity shines through superbly.

With the Z5 also running impressively quietly, showing motion adequately clearly and smoothly, and using its LCD technology to steer clear of the rainbow effect problem that blights budget DLP projectors, you’re probably starting to wonder why the Z5 only has an overall mark of 7.


The answer lies in those same black levels I was praising a moment ago. For while the Z5 certainly can go darker than any other dead cheap projector, that darkness comes at the expense of an uncomfortable amount of brightness. For instance, while the black bits of Barbossa’s cave in ”Pirates…” might appear relatively free of greyness, the piles of gold and precious artefacts lack their customary lustre, looking muted and bland thanks to the extent to which the Z5 has had to reduce the image’s brightness to make black colours look, well, black.


Closer inspection of this scene also uncovers a problem whereby although dark scenes look surprisingly black, they also look rather flat and hollow thanks to the amount of subtle shadow detailing that’s been consigned to oblivion by the Z5’s automatic brightness reduction. You can, of course, manually adjust the image so that it looks generally brighter. But that merely introduces the dreaded grey mist effect over dark picture areas.

The bottom line here is that despite spending an eternity tinkering with all the image adjustments the Z5 provides, I never got a balance between contrast and brightness that I felt wholly comfortable with. There always seemed to be a scene or two in anything I watched that suddenly looked distractingly dark or distractingly light, depending on how I’d got the various contrast-based features set.


Let’s not forget, either, that I was experiencing this in a completely blacked out test-room environment. The Z5’s tendency to bludgeon away brightness during dark scenes could make pictures really quite hard to watch if you have even a little ambient light in your viewing room.


One other much smaller niggle I had with the Z5’s pictures was that they didn’t deliver particularly sharp or highly detailed HD images. You can certainly easily see the difference between HD and standard def sources, but there’s not that jaw-dropping snap and sparkle witnessed with the very best HD projectors around. But this is probably no more than you might expect given that the Z5 only costs £700 these days.


My hope with the Z5 was that I’d stumbled on a true budget gem; an aging but good mid-range LCD projector made irresistible by having its price reduced to bargain bucket levels. And actually the Z5 gets frustratingly close to living up to that hope, showing signs of genuine quality that you seldom get on projectors that have been built from the ground up to hit a £700 or lower price tag. In the end, though, the inconsistency of the Z5’s brightness/contrast balance distracted me just that bit too much for comfort.