Regular readers may have spotted the review of Sanyo’s PLV-Z800 entry-level LCD projector a couple of weeks ago. And if you read it, you’ll know that we were rather startled to discover that despite boasting a completely new model number, following Sanyo’s typical ‘annual progression’ format, the PLV-Z800 was essentially the PLV-Z700 with reduced standby power consumption.


To be honest, this seemed a bit cheeky to us – and certainly didn’t help us feel any better disposed towards the Z800 than we were towards the rather average Z700.


So it’s with a feeling of suspicion that we position Sanyo’s PLV-Z4000 on our projector stand. Will this step-up three-LCD model turn out to just be last year’s Z3000 with a lower standby power consumption?


Actually, yes. Or at least that appears to be the case from detailed scrutiny of both its performance and its spec sheet. It’s possible Sanyo might have introduce the odd firmware tweak here or there since March 2009‘s Z3000 review, but if so, nobody’s boasting about it.

Upon discovering all this, we actually considered not reviewing the Z4000. But then the more we thought about it, the more a review seemed necessary. For a start, we really felt that Sanyo’s dubious policy of using a completely new model number to signify what is, in truth, the very tiniest of changes needed to be highlighted.


Don’t forget by way of comparison that when BenQ launched a revamped version of its W1000 projector recently, it just stuck a + sign on the end of the original name – despite the fact that in reality, the new W1000’s innards were quite a radical improvement on those of the original model. Sanyo’s ‘improvements’ to the Z3000 are so minute by comparison that frankly we don’t think they warrant any change in the projector’s name at all.


In other words, if you can find a Z3000 going cheap on account of the ‘new model’ hitting town, get that instead…


The other good reason for looking at the Z4000 is that it’s worth seeing how its performance holds up against the competition that’s emerged in the 18 months or so since its chassis first appeared in Z3000 guise.


The first thing to say about the Z4000 is that it’s arguably even uglier than the Z800. It’s just a big lump of plastic, really, with its grey finish having even less charm than the cream finish of its cheaper sibling.


The only slightly cool thing about its design is the way a cover slides automatically over the lens when you power the projector down, or slides open when you turn it on. Woo.


The Z4000’s connections live up to today’s projection standards. Most significantly, you get two HDMIs for receiving digital HD sources. But there are also notably a couple of component video inputs, and a D-Sub PC port. A 12V trigger output is perhaps the only thing missing from the connections list that we might reasonably have expected to find.

Setting the Z4000 is superbly straightforward – or at least, that’s the case when it comes to simply getting the right sized image looking geometrically accurate on your screen. There’s plenty of optical zoom to cope with different throw distances, while really simple horizontal and vertical image shift wheels down the projector’s side remove the need for nasty digital keystone image manipulation. In an ideal world, the wheels’ response to your turns would be less baggy and so allow for more precise movements. But this is a pretty small point really.


After this impressively straightforward start, though, the Z4000 careens in totally the opposite direction when it comes to picture calibration. For a start, its presets are uniformly, inexplicably rubbish. The ‘cinema’-based settings all remove too much brightness from the picture, so images lack ‘pop’ and look low on subtle details in dark areas. Yet the Dynamic and Living settings, with their emphasis on brightness, both feature rank colour settings, with far too much emphasis on yellow.


The remaining ‘Natural’ mode, meanwhile, injects too much red and orange into pictures for them to even remotely live up to the preset’s name.

Of course, it’s not especially unusual for a projector’s presets to be pretty unsatisfying. But the Z4000’s are particularly bad – making it all the more aggravating that the Z4000 is also unusually tough to calibrate.


Part of our frustration stems from the way the projector doesn’t provide separate colour gain and offset controls. But the colour management tools it does provide are also unusually presented and seemed to us to be rather tortuous, making correcting the numerous out-of-the-box errors a chore.


The Z4000 also feels a bit cumbersome in the controls it offers for contrast and dynamic iris settings. Ultimately we ended up really welcoming the bounty of options available, but they don’t seem to be ‘joined up’ as sensibly in the menus as we’d have liked.


We didn’t time exactly how long it took us to get the Z4000’s pictures looking as good as we could get them, but the period can safely be characterised as ‘absolutely bloody ages’…


Just as well, then, that our considerable efforts yielded pretty profound levels of improvement.


The single greatest of these improvements came with predominantly bright scenes, which went from looking either pallid or radioactive (depending on preset choice) to looking punchy without appearing forced or ‘flared out’.


We also achieved a setting where predominantly bright scenes with a bit of dark content managed to look dynamic and vibrant without leaving the dark parts of the picture looking unduly greyed out.


As for predominantly dark scenes, we also achieved a markedly more gratifying balance between deep black colours on the one hand and punchier bright elements on the other.

In fact, post calibration, the Z4000’s pictures have a lot of things going for them. For as well as being punchy, bright scenes look sharp and crisp, with good detailing from high def sources. It doesn’t damage this impression of sharpness that the Z4000’s Smooth Motion mode does a surprisingly good job of reducing judder without either generating nasty processing side effects or making the picture look hopelessly unnatural. 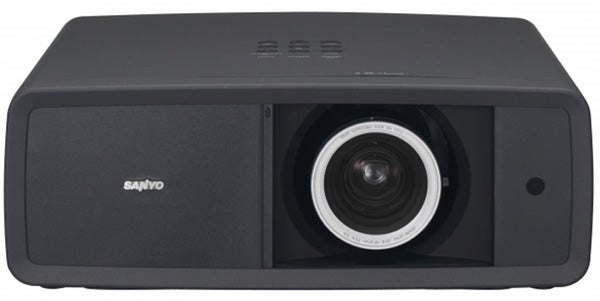 Crucially, though, no matter how hard we tried, calibration couldn’t quite remove ALL of our concerns. For instance, we never totally reconciled greens and yellows, with one or the other tone sometimes suddenly looking unduly dominant in certain scenes. Nor did we shake the feeling during predominantly dark scenes that the picture lacks brightness and dynamism versus some rivals, making dark scenes feel too out of kilter with the rest of the images in a film.


This latter point also convinces us that the Z4000 won’t be an appropriate choice at all for anyone trying to fill a screen bigger than 100in. The picture just won’t be bright enough.


Another smaller negative is that while the Z4000‘s fans are superbly quiet with its brightness output limited to its lowest level, with things set so that the Z4000 delivers a punchy image, the noise from the fans increases quite considerably.


Still, even at its worst it shouldn’t distract you except for when you’re watching near-silent scenes – provided, at least, that you avoid using too many of the various dynamic settings the projector provides, since these can cause the fan noise to adjust ‘on the fly’, making it markedly more distracting.


As with the Z3000 with which it shares, well, pretty much everything, the Z4000 is capable of being a very accomplished projector for its money. It’s just a shame it needs arguably professional levels of calibration before you’ll get anything like the best out of it.


It’s also a shame that at the time of writing, the Z4000 actually costs more than the Z3000 did when it first came out, despite changing nothing but standby power consumption.


Judging the Z4000 on its performance credentials, it just about deserves its 8 overall score. Though we admit we were sorely tempted to drop this to a 7, on account of its set-up hassles and its bare-faced cheek at sporting a model number that makes you think you’re getting a genuinely revamped Sanyo projector when it’s really a near clone of something that first appeared in spring 2009.