While Sanyo’s TVs tend to be associated with the cheap price/average performance end of the market, its projectors are generally regarded as being some of the best in the business.


Though that’s not to say they’re ridiculously expensive. On the contrary, the brand’s new high-contrast, Full HD offering, the PLV-Z3000, is available for less than £2,000. That makes it a cool £200 cheaper than the impressive Panasonic PT-AE3000 I tested recently, and with which the Z3000 seems to have at least a few things in common when it comes to specifications.

Before we get into these specifications, though, I’m afraid I have to report that the Z3000 is just about the drabbest projector I’ve ever seen. Its strikingly large body shows all the design flair of a breeze block, as a plasticky dark grey finish wraps around a style-free rectangular body to depressing effect. It’s basically the AV projector equivalent of a dank rainy day in Stockport – hardly what you want in your living or cinema room!


Thankfully, things look up a little when you turn your attentions to the projector’s rear and find a couple of HDMIs and two component video ports leading the HD charge. There’s also a D-Sub PC port, and a control port for system builders.


It’s as I start scanning through the Z3000’s extravagant feature claims, though, that my objections to the thing’s ugliness start to take a back seat. For there really does seem to be a lot going on here for such an affordable machine. For instance, unusually the projector runs with a 100Hz engine (which skips to 96Hz for 24p playback) in a bid to make motion look more fluid and smooth. Plus, like the Panasonic, it features adaptive frame creation processing.

Next, it sneaks a new optical compensating plate into the lens array that drastically reduces light leakage and so helps the Z3000 to claim a huge (by LCD projector standards) contrast ratio of 65,000:1. Also contributing to this contrast figure are a new variable iris system featuring a lamp-light volume control mechanism that can apparently adjust the lens iris adjustment every 1/60th of a second – easily fast enough to prevent you seeing overt brightness jumps during a normal viewing experience. What’s more, Sanyo claims to have reduced the operating noise of the iris, so that you should seldom, if ever, hear it doing its opening and closing thing.


While we’re on the subject of running noise, I was also mightily struck by Sanyo’s claim that the Z3000 can run with just 19dB of noise provided you’re using its low brightness settings. The 19dB figure is exceptionally low for such an affordable projector, and the projector mostly lives up to its boast, running more quietly than any other affordable projector I can think of unless you’re foolishly running the lamp at full brightness.


Sanyo has also tried to make a big deal out of the fact that – so far as we know – the Z3000 is the first projector to carry a 5:5 pull-down mode to deliver a more natural, fluid image from 60Hz inputs. Which would be great if the UK actually had all that many 60Hz sources!

Basic set up of the Z3000 is a doddle – provided you can find a coffee table big enough to hold its considerable bulk. Thanks to the provision of exceptionally flexible horizontal and vertical image shifting wheels down the projector’s side, I was able to get an image perfectly positioned on my screen in no time – and without the need for any nasty, distorting keystone correction, either.


The projector’s onscreen menus aren’t bad either, in a no-nonsense kind of way. The only area of complaint here is that I found the picture unusually tricky to calibrate correctly. And worryingly this seemed to be more down to issues with the image itself than the projector not providing me with enough adjustment tools for the job. More on this later.

Key features of the menus that you’ll need to familiarise yourself with include a selection of lamp output presets, with two dark ones aimed at home cinema use; gamma adjustment; noise reduction adjustment; two ‘dynamic’ iris settings and one fixed option; the facility to reduce the iris’s range; automatic black stretch, contrast enhancement and transient improvement options; an adjustable Smooth motion mode; that 5:5 pull down system; and last but not least, a really quite sophisticated colour management system.


The latter actually lets you select small target areas of the picture (which is frozen at the moment you select the feature) and adjust the level, phase and gamma of the selected tone using a ‘sliding scale’ of slightly different shades to either side of the original. Helpfully there are Before and After boxes so you can track exactly what impact your changes are having.


If this all sounds a bit scary, the projector also ships with a variety of picture presets installed, including Brilliant Cinema, Creative Cinema, Pure Cinema and Natural. Though I have to say that I didn’t find any of these entirely compelling, chiefly on the grounds that I just wasn’t blown away by the projector’s colour response when using any of them. 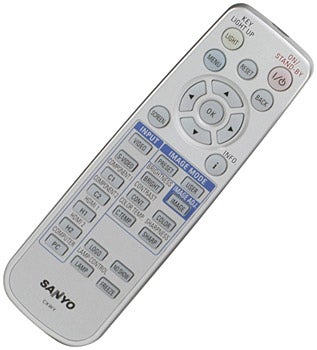 Seriously not one of the out-of-the-box modes seemed to deliver a colour palette that I felt entirely convinced by, and to be honest, while considerable time spent in the innovative but very time-consuming colour management system yielded considerable improvements, I never quite felt that the results looked completely ‘right’.


Trying to be a bit more specific on this, skin tones tend to look a touch orangey, some greens look slightly anaemic and some dark scenes seem to carry a slightly green undercurrent.


As an interesting adjunct to this, two of the three cinema presets provided really don’t infuse the image with very much brightness at all, a phenomenon I usually associate with a projector that’s slightly struggling to get its colours coming out right.


It’s probably on account of this apparent suspicion of brightness that the Z3000 also doesn’t deliver quite so much snap and dynamism with dark scenes – or rather combination dark/light scenes – as some competitors, including Panasonic’s PT-AE3000.

At this point, it’s high time I stepped in and made it categorically clear that contrary to what you’re doubtless starting to think, the Z3000 is certainly not a bad projector. For instance, it handles black levels extremely well for a projector at its price point. There may be a touch more greyness over the very darkest of blacks than you get with Panasonic’s PT-AE3000, but I’d say that the Z3000 actually slightly outguns the Panasonic when it comes to reproducing subtle shadow details in dark areas. This means the Z3000’s dark scenes can look slightly three-dimensional.


The Z3000 also produces a really sharp image, usually on a par with the Panasonic except for maybe a touch more blurring when showing motion. Not that the Z3000 is bad with motion, mind you. In fact, when it comes to reducing judder it’s actually better than the Panasonic.

There’s still definitely judder to be seen – even using the Smooth Motion mode set to full. But this judder seems marginally less in your face than it can be on the brighter, crisper Panasonic. And in any case, I’d rather have the laid back approach to judder reduction exhibited by the Z3000 than the nausea- and side effect-inducing aggressive approach witnessed with some of the settings for Sony’s MotionFlow projection technology and Philips’ HD Natural Motion system.


I was also pleased to note no sign of LCD’s dreaded ‘chicken wire effect’, even when watching the projector on a 100in screen, and should remind you too that since this is an LCD rather than a DLP projector, there’s also no need to worry about DLP’s rainbow noise.


Overall, while I wasn’t able to completely conquer the projector’s colour issues, I did get them close enough to reveal that the Z3000 can produce pictures that really do look excellent for a sub-£2,000 projector.


I might as well cut straight to the chase here and say that if money’s no object, I personally would go for Panasonic’s PT-AE3000 ahead of this Sanyo. Partly on account of the Panasonic’s seriously handy integrated anamorphic lens adjustment, but mostly because I find its out-of-the-box colour settings markedly better and its presentation of dark scenes more dynamic.


But if you’d rather save a couple of hundred quid to blow on a few Blu-rays – as well as getting a handy three-year warranty into the bargain – then you can rest assured that the Sanyo PLV-Z3000 is still a very talented machine. Albeit one that you might need a bit of help with initially if you want to get it looking its best.