Right now is not a great time to be an LCD projector. Your arch-rival DLP technology has finally joined you in offering affordable full HD solutions, and you’re suddenly also up against supremely talented competition from not one but two new projection formats: JVC’s D-ILA, and Sony’s SXRD.


But this isn’t enough to deter Sanyo from sticking its LCD head above the parapet. And nor should it be. After all, Sanyo has been making LCD projectors for the home cinema market longer than most, so you’d like to think that if anyone can assert LCD’s presence on the projection battlefield, it’s Sanyo.


What’s more, the Sanyo LCD projector we’re looking at today is rather handsomely specified. For starters it’s got that current flavour of the month, a full HD native resolution of 1,920 x 1,080. Then there’s the small matter of a 15,000:1 claimed contrast ratio – a large figure by any projector technology standards, and a simply huge one by LCD standards.

The press blurb on the Z2000 even boasts a couple of world firsts, for heaven’s sake. The most interesting of this ‘world-leading’ duo is the claim that the projector boasts ‘the industry’s most silent fan system’. The whirr of the fans needed to keep projection lamps cool is a constant bone of contention with us when we’re doing projector reviews, so if the Z2000 really can live up to its ‘silent’ billing, we’ll be happy as Larry.


The Z2000’s other claim to fame is, apparently, its lens shifting function, which rather vaguely is reckoned to be the ‘industry’s most advanced’. What this translates to in practice is the seemingly unique ability to shift the picture vertically up and down as much as three full screen sizes, or left to right by as much as two screen widths.


While the Z2000 has the on-paper spec to set your heart pounding, its aesthetics will leave you colder than a penguin’s fridge. Essentially it’s just a big, chunky cuboid clad in a slightly flimsy and entirely drab white finish. Yeuch. This is definitely a projector you’ll want to put in a cupboard when you’re not using it rather than leaving it out permanently on your coffee table.

Things get back on track, though, with a peek at the Z2000’s roster of connections. Heading things up are not one but two HDMIs, both built to the HDMI v1.3 specification. This means they’re able to play the Deep Colour enhanced picture quality format (um, assuming any discs carrying the format ever appear).


Other highlights include two component video inputs for added flexibility and a D-Sub PC port, with the only disappointments being the lack of a 12v trigger output for automatically driving a projection screen, and no RS-232 provision for easier system integration.


With its £1,805 price point looking very affordable by full HD projector standards, the Z2000 has the potential to reach quite a wide and relatively inexperienced AV audience. So it’s pleasing to find that it is reassuringly simple to set up. 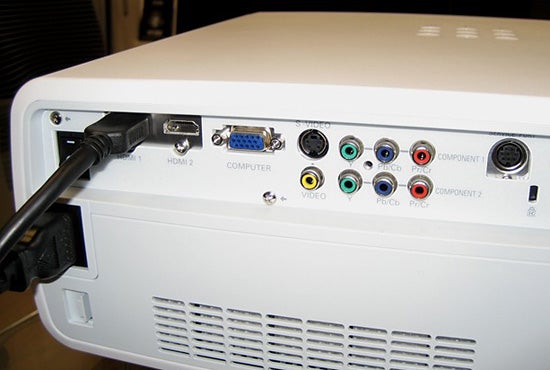 For instance, that apparently world-beating image shift system together with a very healthy x2 optical zoom make it possible to adapt the Z2000 to just about any room size and shape. What’s more, operating the image shift is no more complicated than spinning two wheels down the projector’s side; the remote control is well labelled (if a touch unintuitive in layout); and the onscreen menus are clean and, for the most part, sensibly organised.


Looking in depth at a few of the features contained within these onscreen menus, it transpires that – inevitably – the 15,000:1 contrast ratio is not a totally ‘pure’ figure. That is to say it’s only achieved by using a dynamic iris to ramp down the image’s brightness when onboard processing detects that a dark scene is being shown. In other words, you will never find the projector’s maximum claimed brightness (1,200 ANSI Lumens) and that 15,000:1 contrast ratio on screen simultaneously.


In terms of the projector’s feted quiet running, to get the best results you need to select a Theater Black image preset – at which point noise levels should be no higher than 19dB. If you’re wondering how Sanyo has managed to be that bit quieter than the rest with the Z2000, the answer apparently lies in its use of a new Sirocco cooling fan featuring a freshly developed large-aperture design.

Other little tidbits tailor-made to raise your expectations include compatibility with Blu-ray/HD DVD’s 1080p/24fps HD format, and a new (to Sanyo) 14-bit 3D Colour Management system. This system, claims Sanyo, should produce a colour range 1,100 times better than that of the brand’s current HD Ready LCD model, the PLV-Z5.


One last ‘boast’ Sanyo makes for the Z2000, though, actually rather backfires. For apparently the inorganic LCD panel at the projector’s heart is the latest C2FINETM D7 from Epson. Which would be great were it not for the fact that the most recent projector we’ve seen from Epson, the EMP-TW1000, was really not very good at all…


Thankfully the Z2000 is way better than the Epson model we just name-checked, particularly when it comes to black level response. For where the Epson’s black levels were seriously wanting, with dark scenes besmirched by some pretty nasty greyness, the Z2000’s black levels are actually something of a revelation for the affordable full HD LCD market.

During a profoundly dark sequence such as the one where Supes gets beaten up on an ‘island’ of Kryptonite in the HD DVD of ”Superman Returns”, the Z2000’s black levels are almost completely free of greyness. Furthermore, dark parts of the picture retain enough shadow detail information to suggest that the lamp brightness really isn’t being reduced as much as you might expect to make such black level depth possible.


Also, during the actually pretty lengthy duration of our tests we only spotted a small handful of very tiny brightness ‘steps’ caused by the Z2000’s dynamic iris going about its work.


The bottom line here is that the Z2000’s black levels – a traditional weakness of LCD technology – are actually good enough to compete with many similarly priced DLP models.


The Z2000 also earns plaudits during our ”Superman Returns” session for its impressive sharpness. All the lovely fine detail in the disc’s terrific HD transfer is lovingly reproduced, right down to the weave in Clarke Kent’s endless brown suits.

Furthermore, there’s precious little video noise to stand in the way of the fine detail clarity, especially if you do the sensible thing and only watch HD sources with the projector’s ‘Overscan’ option set to zero. Yet more good news finds colours looking intensely vivid and bright.


First and worst, although its colours are rich, they also tend to feature some decidedly off-key tones. The reds of Superman’s cape look over-stressed, so that they almost glow in a most unnatural manner; the greens of the Kryptonite tend to look strangely over-smooth and plasticky; and sometimes different features on the actors’ faces seem to have come from wholly different faces, so inconsistent can their colour toning be.

Making sure you select the ‘Enhanced’ mode for the HDMI input improves things a touch, but we never got things looking nearly as natural as we’d like.


The Z2000 also loses points with us by not being particularly good with standard definition sources. Edges of standard def objects look unusually jagged, and strangely, one suddenly becomes visibly aware of the LCD pixel structure that makes up the image.


Our last problem, ironically, concerns the projector’s running noise. While it actually does seem unusually quite for much of the time, occasionally, when the projector has to cope with a particularly dynamic brightness adjustment, you can clearly make out the noise of the iris moving – and this actually seems more distracting than the slightly louder constant whirr of most of the Z2000’s rivals!


In some ways the Z2000 is a ground-breaking piece of kit. Certainly its black levels redefine what we consider possible from an affordable LCD model. And these, together with its extreme HD sharpness, may be enough to entice budget buyers to part with £1,800 or so. However, Sanyo really needs to work on its colour tuning before it might persuade us to pick it over the best the DLP world currently has to offer.