Sanyo’s latest LCD TV sure knows how to tick our ‘booyah’ boxes. For starters, it’s 47in across. Check. Next, it’s got a full HD resolution. Check. And finally it costs a really pretty puny £1336 – which merits a check for both us and our bank manager. All that’s left to do is impress us with its other features and performance, and ‘job’s a good ‘un’, as they up North.


Considering it has clearly been built to a price, Sanyo’s CE47FD51-B is really not a bad looker at all. A matt black colour is wrapped around a really quite stylish mix of curves and angles, with a tasteful arced bottom edge being particularly easy on the eye. The only things letting the side down a touch are the facts that the set is a bit chunkier than most, and also looks just a bit plasticky in its finish. 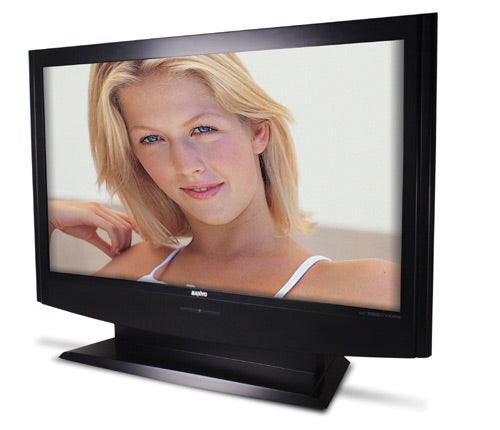 Connectivity is perfectly respectable, with two HDMIs and a component jack for HD duties, a D-Sub PC interface, Scarts and even a digital audio output and a subwoofer output. These latter two jacks are particularly thoughtful additions at this price, with one allowing you to pass digital audio tracks received via the HDMIs through to a suitable AV receiver, while the other lets you ramp up the bass via an external subwoofer speaker if it turns out the Sanyo’s own speakers are lacking in the low frequency department.


Not surprisingly the HDMIs on a set this affordable don’t meet the latest v1.3 standard. But they are, at least, able to take in 1080p/24 feeds from suitably capable HD DVD and Blu-ray players, an ability that we’d hardly take as read on a budget TV – even one with a full HD pixel count.

So far the CE47LD51 is doing a good job of both impressing us and making us forget that it’s a budget TV. But reality comes crashing in rather with the set’s claimed contrast ratio, which comes in at a relatively paltry (by today’s standards) 1000:1. As well as raising major concerns about the set’s contrast performance, this sort of figure also implies that unlike most big-screen LCD TVs around these days, the CE47LD51 doesn’t employ a dynamic backlight, whereby the brightness of the picture can be reduced when dark scenes are detected to produce better black levels. 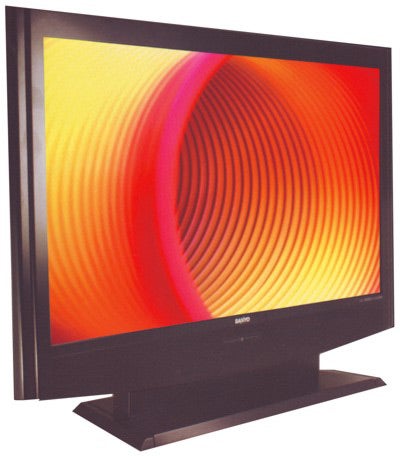 More evidence of the CE47LD51’s budget nature starts to creep in with its features, too. Or rather the lack of them. All we could find that warrants even a passing mention during a trawl through the onscreen menus are a digital tuner with 7-day Electronic Programme Guide support, a 3D Panorama audio mode reckoned to deliver a pseudo surround audio presentation, and a standard noise reduction routine.

There don’t appear to be any of the fancily named picture processing systems that decorate practically every other big LCD TV in town, and nor is there 100Hz for improving LCD’s traditional problems with losing resolution when showing moving objects.


With by now no great expectations of finding much quality in the CE47LD51-B’s pictures, we fire up Casino Royale on Blu-ray and… have to admit to initially feeling pleasantly surprised by what the Sanyo delivers.


The free-running sequence near the film’s start, for instance, really looks very appealing, for no less than five key reasons. First and foremost, the HD picture really does look very crisp and detailed indeed for a set that apparently has no heavy-duty processing to help it look sharper. We’ve seen much more expensive 46-50in TVs deliver far less sharpness than this Sanyo.

Next, the impression of sharpness we’ve just noted owes at least a nod to some surprisingly crisp motion handling which ensures the image suffers less resolution loss than anticipated over Bond and his quarry’s pumping arms and legs. Even the fast camera pans used in this sequence are handled very nicely.


Third on our hit list is the brightness of the picture, which radiates forth with an intensity that again belies the CE47LD51’s relatively meagre price. Fourth, connected to this brightness are some pleasingly intense, rich colours which, while not always entirely natural in tone (skin tones look a bit over-ripe, for instance), are at least accurate enough not to distract you from the film.


Finally, HD pictures are surprisingly free of noise such as dot crawl or grain. If the CE47LD51 was as good with dark scenes as it is with bright HD ones, we’d be looking at one of the bargains of the decade. But sadly it isn’t. 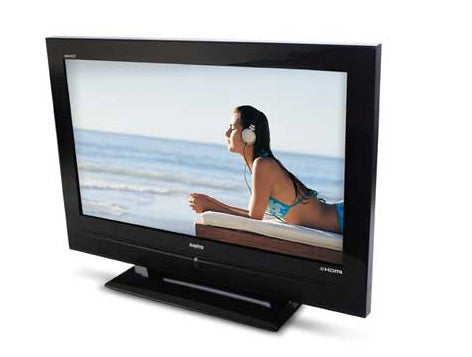 Head for a dark moment in Casino Royale such as the night-time scene outside the casino where Bond has to be revived by Vesper, and immediately the feared problem of greyed-over blacks rears its ugly head. It’s not shockingly bad or anything, but it’s certainly severe enough to rob dark scenes of any great sense of depth, as well as making colours during dark scenes sometimes look a bit odd to say the least.


Although not as bad as some full HD LCD TVs when it comes to showing standard definition, meanwhile, the CE47LD51 is also not particularly great. And it’s actually barely average in the audio department, with a lack of bass, dynamic range and raw power all leaving it sounding decidedly thin and feeble. Furthermore, not surprisingly with the basic sonic elements so lacking, the CE47LD51’s pseudo surround mode is laughably bad.


Unlike most really affordable LCD TVs, the CE47LD51 is at least capable of producing a truly excellent picture when the content of the source suits it. But perhaps inevitably these impressive moments are joined by just as many average ones, making it hard to really recommend the set to anyone other than the most die-hard of ‘must-get-the-biggest-screen-I-can-for-my-money’ obsessives.