We don’t know about you, but we have to admit we’d almost forgotten about Sanyo as an AV brand. It used to be one of the biggest players in the UK, but these days it seems to have become lost under a deluge of sets from Samsung, LG, Panasonic, Sony and the like. So that part of us that always loves the underdog is pleased as punch today to get our hands on a new Sanyo LCD TV in the shape of the 32in CE32LD81-B.


Catchy by name the CE32LD81 is not, but it’s kind of catchy by nature. Take its price, for instance. Less than £430 for a 32in LCD TV really isn’t much at all, taking Sanyo dangerously close to the sort of territory usually reserved for dedicated budget brands like Goodmans and Bush. The TV’s also a pretty attractive looker in its minimal, gloss black bezel and unusually bold neon blue standby light. If you’re thinking of wall-hanging it, though, just heed the fact that it’s actually quite chunky round the back. 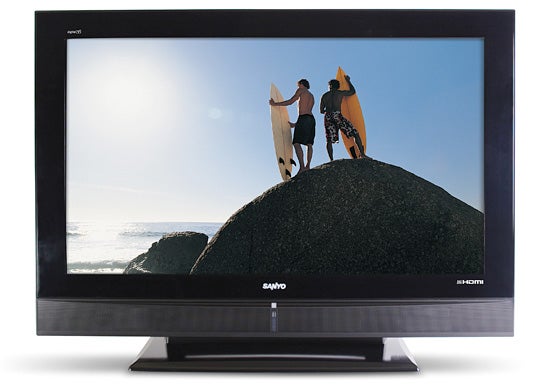 Connectivity is perfectly acceptable for such a cheap 32in TV. Twin HDMIs and a component video jack get the HD video ball rolling, plus there’s a D-Sub PC input so the TV can double up as a computer monitor, a CAM slot for adding subscription services to a built-in Freeview digital tuner, and even a digital audio output so you can pass on to a suitable AV receiver any audio information carried in via the HDMIs.


We should probably say in the interests of completeness that the CE32LD81’s HDMI inputs are v1.2 affairs, not v1.3, and also that they don’t take 1080p signals, instead topping out at 1080i. But then it’s hardly realistic to expect HDMI v1.3 on a TV as affordable as this one, and 1080p really isn’t very important at all on a set as small as 32in, where spotting differences between 1080i and 1080p is next to impossible.


The CE32LD81 is an HD Ready set rather than a full HD one, which is to say its native resolution comes in at 1,366 x 768. This again is perfectly fine for a 32in TV. More alarming is a claimed contrast ratio of 1,200:1 which looks rather underwhelming when you consider that LCD TVs are coming out now with contrast ratios as high as 8,000:1. The only potential strength we can find in this apparent weakness is that it means there’s no backlight-adjusting dynamic contrast system in play and so we won’t have to worry about the sort of brightness ‘stepping’ that can afflict some dynamic contrast TVs. Or maybe we’re just clutching at straws…

We wouldn’t expect to find a great many fancy features on a TV as cheap as the CE32LD81, and it doesn’t let us down! After an in-depth trawl of the dated-looking onscreen menus, all that’s worth a mention are a noise reduction routine and a Film Mode for boosting motion handling during movies. And so with that, we find ourselves getting stuck into the performance part of this review rather earlier than we normally would. Just as well, then, that there’s plenty to talk about, most of which is not that complimentary, unfortunately.


Things start badly, when it turns out that our CE32LD81 doesn’t actually work properly with our Sky HD receiver. To explain, we’ve got our receiver set to its ‘Auto’ output – definitely the one that everyone should use to get the best picture quality from all the different resolutions available – which means it automatically shifts between 576p and 1080i output depending on whether the source material selected is HD or standard def. 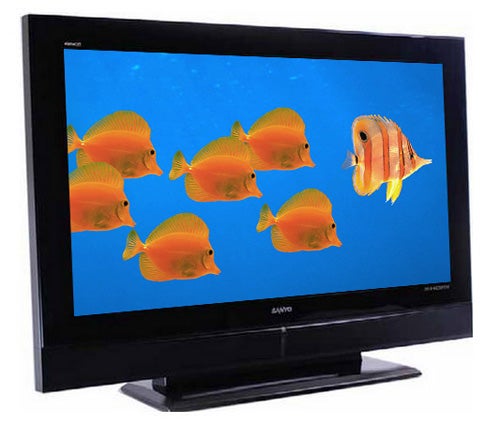 Normally, the box’s switching from a standard def to a high def channel merely results in a momentary blanking of your TV’s screen as it adjusts its output from standard def to HD. But with the CE32LD81 the HD picture appears without the sound, which takes almost a minute to suddenly rejoin the picture. Weird.


The situation is even worse if you change to a standard def channel from a high def one, as this invariably causes the TV to ‘crash’, requiring you to switch it off and on again. Nuts.


The grumpiness naturally raised by this Sky HD debacle is hardly alleviated by first impressions of the CE32LD81’s picture quality. For starters, black levels are pretty much as weak as we’d feared from the 1,200:1 contrast ratio claim. There’s clear evidence of the tell-tale greyness over dark picture areas that always characterises TVs with contrast problems, at times making some of Halo 3’s darker corners quite difficult to see into – not what you want when you’ve stupidly decided to do the campaign on Legendary level. There’s also a distinct lack of subtle background detailing in dark parts of the picture, leaving them looking hollow and dislocated from the rest of the image.

The next thing counting against the CE32LD81 is its colour response. To our eyes, tones tend to look slightly dull and lack naturalism, especially when it comes to rendering skin tones. Not surprisingly the combination of muted and unnatural skin tones does no favours at all to Johnny Depp’s painted face in Pirates of the Caribbean. Although annoyingly my wife still refused to say that he actually looked ugly.


Another factor contributing to the depressing averageness of the CE32LD81’s pictures is their lack of crispness with HD sources. This isn’t shockingly bad; you can certainly spot the difference between HD and standard definition pictures, which isn’t always the case with some of the worst budget TVs around. But at the same time HD pictures don’t look as detail-filled or pin-sharp as we know they can be. 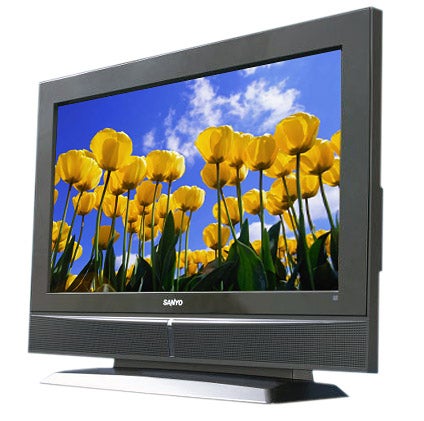 This is especially true when things get moving in a picture thanks to the Sanyo’s fairly unspectacular handling of LCD’s customary response time issue, leading to resolution loss over motion.


Trying to put a positive spin on proceedings, none of the picture problems we’ve described could be characterised as absolutely terrible. And there are one or two strengths around too, including a generally bright picture that at least tries to hide the black level failings and some pleasingly noiseless reproduction of standard definition pictures.


Furthermore, the CE32LD81’s sonics aren’t at all bad either, with decent levels of bass, plenty of clarity in the mid-range, and fair amounts of treble detailing.


It’s nice to know that Sanyo’s not only still around, but able to sell a TV as aggressively priced as the CE32LD81-B. It’s just a real shame that the quality of this set is just way too average for us to be able to give it any sort of serious recommendation.