Most of the Bluetooth headsets on the market are mono only so they’re useless for listening to music and while there are some stereo Bluetooth headphones around many of them lack a microphone for making calls. With all but the cheapest mobile phones (and the iPhone) on the market now supporting Bluetooth A2DP for wireless stereo music streaming, mobile phone users need a headset that supports both stereo audio and handsfree calling, but there currently isn’t a huge range of options to choose from. At least STK has added one more to this select bunch with the launch of the BTHS600 headset. 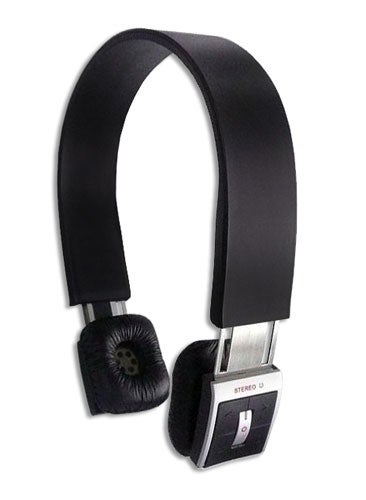 These cans look impressive right out of the box as STK has done a good job on the styling. Whereas most over-the-ear headphones use a relatively thin headband matched to larger earpieces, the headband and earpieces on the STKs are roughly the same size. It gives them a very unusual and modern look, and although the earpieces are a tad smaller than usual they’re still large enough to cover the ear sufficiently and block out a lot of background noise. They’re also very comfortable to wear as the headband is easily adjustable and the ear pieces are mounted on a tilting pivot and so adapt to the shape of your ears. Also, because the earpieces don’t cover the whole of your outer ear they don’t heat up as much with prolonged wear as full over the ear models do (or does this only happen to us?!)


Connecting the headset to your phone is just as easy and straight forward as with any other Bluetooth headset. You just hold down the power button until the small LED starts to flash alternatively red and blue and then do a search for the device on your phone. Once found, you just enter ‘0000′ as the password and you’re ready to rock. 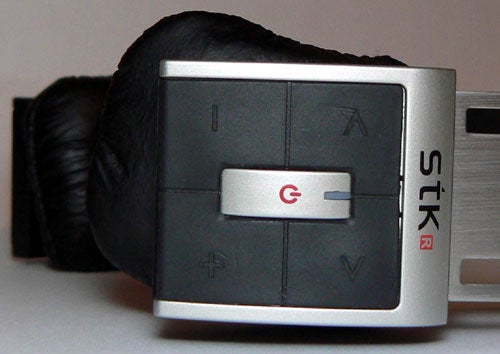 When it comes to sound quality the headphones put in a healthy performance. They produce much more rounded and solid bass than you get from smaller in-ear headphones and the higher frequencies sound nice and crisp without being too tinny. The mid range is solid, but perhaps not quite as distinct as it could be, but you can improve it a bit by tweaking the graphical equaliser on your phone if it has one.


When you’ve got an incoming call on your mobile, music on the headset is automatically faded out so you can tap the multifunction button to take the call. Call quality is generally very good with speech unsurprisingly sounding very crisp and clear through the earpieces. The microphone performs well, but voice quality can sound a little bit hollow as it tends to pick up a fair amount of background echoes and reflections. It certainly does the job, but it isn’t quite as good as something like the Jabra BT530, mainly because it doesn’t have built-in noise cancelling technology.

STK quotes a range of 10m, but we found that the distance they will work over depends greatly on the phone you’re using, rather than the headset itself. For example, when used with the Blackberry 8220 in a three bed Victorian house in London it worked even with the phone downstairs while the headphones were upstairs. However, the range was far shorter when used with a Nokia N85. Here the headset struggled to keep in contact with the phone even when it was just in an adjacent room, presumably because Nokia has turned down the intensity of the Bluetooth signal to preserve battery life. However, for most people the range shouldn’t be a huge issue as most of the time you’ll be carrying your phone with you or at least have it in the same room as the headset. 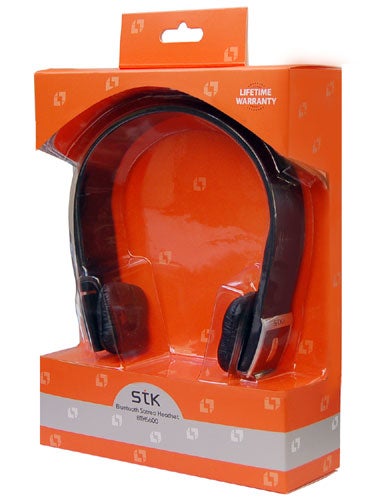 As well as the multi-function power button there are four other controls on the outside of the right-hand earpiece: two buttons for turning the volume up and down, plus two buttons for skipping backwards and forward through your music tracks. Whether the latter two buttons work or not with your handset will depend on its Bluetooth implementation, although they worked without any problems on both the Nokia N85 and Blackberry 8220.


The multi-function button takes care of most of the call handling functions. For example, to activate voice dialling you press and hold it down for two seconds. To redial the last number you press it twice and to mute and unmute the microphone you press it twice in quick succession. Again, not all these functions are supported by all phones.


The headset’s battery life was pretty impressive. STK quotes talk time of up to 11 hours and music listening time of up to eight hours. Using it for a mixture of music and calls we got around seven hours from it before it needed a charge. One slightly annoying issue is that there’s no battery indicator so you never really know how much charge is left before you head out on your travels. When the battery is low the LED flashes and the headset produces a tone every 20 seconds, but by that time it’s often too late as you’re already on the move. 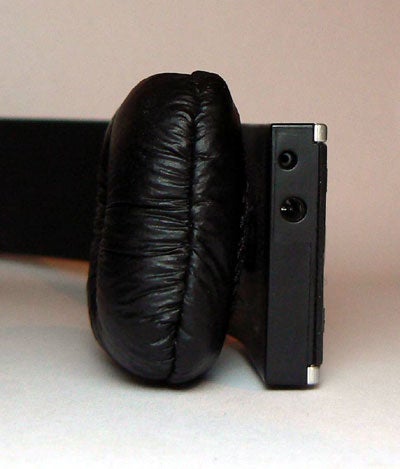 You charge the headset by connecting one end of the supplied lead to your PC’s USB port and the other end to a circular socket on the bottom of the right earpiece. It’s a shame that STK didn’t equip the headset with a standard mini or microUSB port, as if you lose the supplied cable you’re a bit screwed. It also means you can’t top it with a charge, say when you’re at a mate’s house, unless you’ve remembered to bring the lead.


If you’re on the hunt for a set of wireless headphones for use with your phone then we reckon the BTHS600s should definitely be on your list. They look good, sound good, have long battery life and are both comfortable to wear and easy to use. We’d like to see a battery indicator and a standard USB charging connector on the next version of these cans, but on the whole in their current form they represent good value for money at their present sub £35 price point.