SD cards aren’t the most exciting of products, they pretty much do what they’re supposed to – slip into your digital camera, PDA or whatever and act as removable storage. I’m therefore not in the habit of reviewing SD cards, since most of the time there’s little to differentiate them from each other, bar read and write speed. But this particular SD card is very different indeed and definitely deserves a closer look.


I was attending a press conference at the Consumer Electroncs Show in Las Vegas when SanDisk announced this product and it’s taken over half a year for me to finally get my hands on a retail sample. The SanDisk Ultra II Plus USB SD card is very different from any other SD card you’re likely to find and it’s definitely far more convenient. You see the problem with digital cameras is getting the images from the camera to your computer. 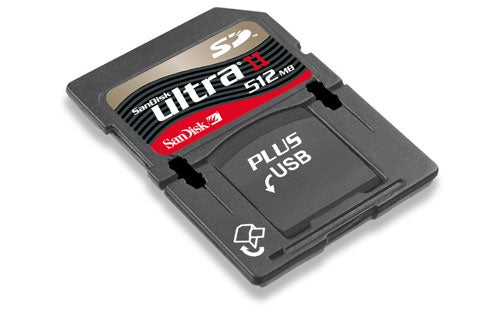 The most direct way of transferring your digital images to your PC is to connect the camera directly to it, via a USB cable – but this is far from an elegant solution and it also means that the battery in your camera is running down while you’re doing the transfer. A much better idea is to remove the card and plug it into a card reader, preferably a USB 2.0 model for fast transfer. But the card reader approach brings with it a new set of problems, since you need to have the reader with you all the time if you want ultimate flexibility – and if like me, you’re travelling with a notebook and need to offload your images, a card reader is just another bit of kit to squeeze into your already bloated bag.


So, what’s the answer? SanDisk thinks that the answer is the Ultra II Plus USB SD card and I’m inclined to agree. What SanDisk has done is produce an SD card that can slip happily into any SD compatible device, but which will also connect directly to the USB port on your computer, thus negating the need for a card reader. 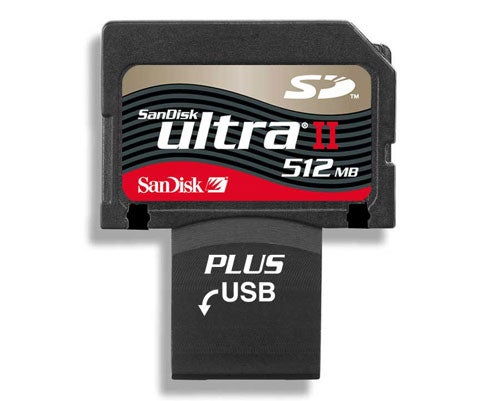 But whether or not this card is based on a different form factor or not isn’t really important, what is important is how useful it is. As already mentioned, for someone like myself who regularly has to report from large trade shows, a memory card that I can insert straight into my notebook without having to carry a card reader is a real bonus. If this design catches on, it could also mean that notebook manufacturers won’t have to try and squeeze in multi-format card readers into their machines, thus saving weight. 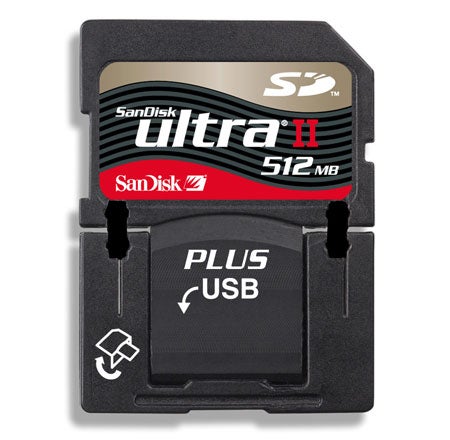 In use this little card performed flawlessly. I copied 342MB of HD video to the card first using a USB 2.0 card reader and then plugging it straight into the PC – both methods turned in times of just over 50 seconds, while reading back the data took just over 30 seconds. I guess the advantage with a card like this is that it can also be used as a USB memory key. It’s clear that SanDisk expects you to use the card in this manner, since it supplies a slim, key ring holder, so that you can carry it with you at all times.


But it’s not all a bed of roses with this card, as how useful it is depends entirely on the location and layout of your USB ports. You see if you have very little space surrounding your USB ports, there might not be enough room to insert the card. But even if you have unrestricted USB ports, it’s a bit fiddly inserting the card if there’s something plugged into the adjacent port. 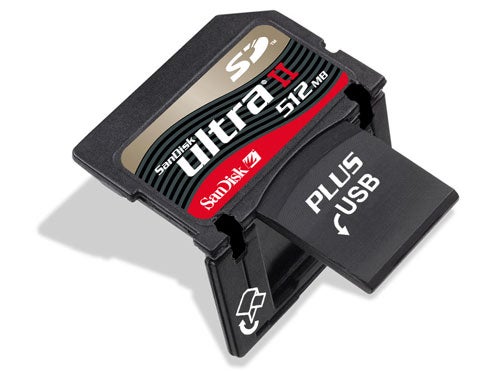 The answer to this problem would be to bundle a USB extension cable in the box to get around those awkward USB ports, but unfortunately SanDisk doesn’t supply one.


Another factor to consider is price, but you have to remember that this is a high-speed card, so you’re not going to be able to pick it up for under £30 like a bog standard 512MB SD card. In fact, a non USB compliant Ultra II card will set you back around £43, so you’re actually only paying £7 extra for the USB functionality. Personally I think that the price is pretty reasonable, considering the fact that you’re actually getting a USB memory key and an SD card all in one svelte package.


So, the SanDisk Ultra II Plus USB SD card isn’t quite perfect, but it is revolutionary in the best possible way. Hats off to SanDisk for coming up with this idea, and I sincerely hope that one day all memory cards will work this way.