What is the SanDisk Ultra II 240GB?

The latest drive from storage specialists SanDisk is a mid-range product that really shows how far SSDs have come – it’s not long ago that a 240GB drive costing £100 would have raised plenty of eyebrows.

The Ultra II’s £100 price means it costs just under 42p per gigabyte. That puts it in an interesting position: cheaper than the Samsung 850 Evo, which arrives at 44p per gigabyte, but not as affordable as the 30p-per-gigabyte Crucial MX100.

The mid-range price hasn’t prevented SanDisk from trying something new with the Ultra II. This is the first SanDisk SSD to deploy TLC NAND, and the first time it’s been used inside a consumer drive that doesn’t bear the Samsung brand. That’s a big move, and it’s taken some time – Samsung first debuted TLC drives way back in 2012.

The choice of TLC memory comes with pros and cons. The cells used to form this drive’s memory can hold three bits of data each, which increases density – so the same amount of silicon has more space for storage. That helps bring the cost down, but it also hampers performance, as electricity has more distance to travel inside each of those cells. 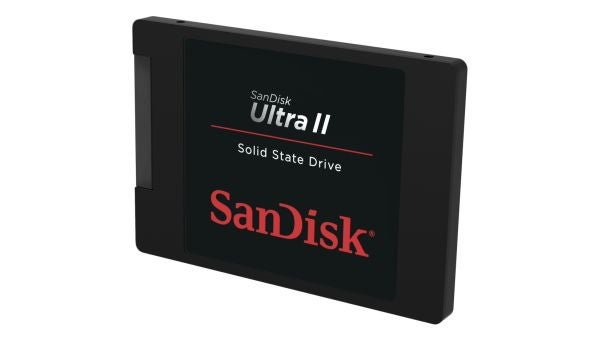 Elsewhere the Ultra II is more conventional. The memory used is built on a 19nm manufacturing process and using horizontal layers, rather than the 40nm vertical layers chosen by Samsung for its 3D V-NAND system.

SanDisk uses two Marvell controllers inside Ultra II drives. The smaller 120GB and 240GB models use 88SS9190 hardware, while the 480GB and 960GB versions deploy 88SS9189 hardware. The former is a four-channel controller, while the latter is an eight-channel chip – a choice that SanDisk has likely made due to the higher demands of its larger drives. The latter is also the same controller used by Crucial in its MX100.

SanDisk’s drive comes with a feature called nCache, which uses 10GB of the 240GB drive’s space in an SLC-style caching mode. It’s a neat feature that will improve response times when dealing with frequently-accessed files. It’s reminiscent of Samsung’s Rapid Mode, but SanDisk hasn’t found room in this drive for any encryption.

We usually talk about endurance ratings when discussing an SSD’s specification, but SanDisk doesn’t publish these for the Ultra II. That shouldn’t be a problem for most home or gaming PCs, which don’t put huge demands on SSDs when it comes to writing data, but those after a drive for intensive work should look elsewhere. 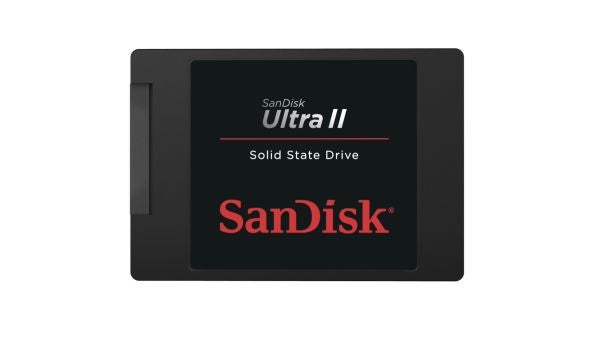 TLC memory isn’t the
fastest, and the Ultra II’s lack of raw pace was exposed in our AS SSD
benchmarks. In the sequential read test the Ultra II managed 505MBps – a
mid-range result that’s not as good as the MX100’s 519MBps pace. The
SanDisk beat the MX100 with a file write speed of 473MBps, but that
result wasn’t enough to lift it beyond mid-table – and it wasn’t enough
to beat the Samsung 850 Evo, either.

The situation wasn’t much
better when handling smaller files. The SanDisk’s 4K read and write
speeds of 30MBps and 72MBps both fell behind the MX100, and in the 4K-64
benchmark it trade blows with its cheaper rival – faster when reading,
but slower when writing. None of these scores could match Samsung’s Evo,
which remained convincingly ahead throughout these tests.

The
Ultra II hit its stride in our Atto benchmarks, which evaluate
performance across a wide range of file sizes. In the 8K test the
SanDisk returned read and write speeds of 407MBps and 391MBps, with both
scores miles ahead of anything the Crucial could manage. That lead was
maintained across the rest of our tests, too: when reading files the
SanDisk’s peak of 558MBps snuck ahead of the MX100’s top score of
552MBps, but when writing the Ultra’s top pace of 507MBps was much
better than the Crucial’s 346MBps result.

The SanDisk’s read peak
was better than the Samsung Evo, too, although the Samsung fought back
with a top write result of 530MBps.

The good form didn’t continue
in the IOMeter tests. In the all-in-one benchmark the Ultra II’s result
of 1843 I/Os proved sluggish – around 600 points behind the Crucial,
and several times slower than top SSDs from Samsung. The SanDisk’s raw
speed of 70MBps was similarly poor – slower than both drives – and its
average response time lagged behind, too. 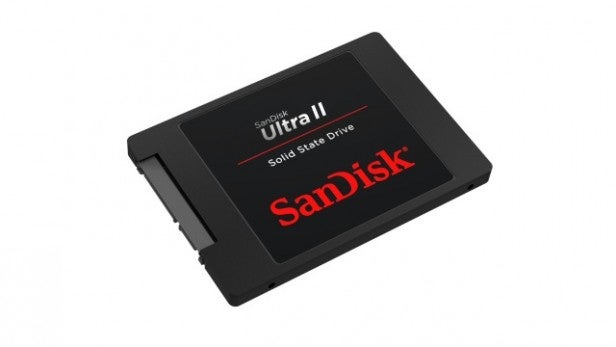 The
Ultra II includes a three-year warranty, which is about what we now
expect from affordable SSDs – that deal matches what’s on offer from the
MX100. That said, it’s two years short of the Samsung 850 Evo’s
coverage.

We no longer expect plenty of accessories inside SSD
boxes, but that hasn’t stopped SanDisk including a 9.5mm spacer with the
Ultra II. It’s a handy bit of kit that enables this 7mm drive to fit
into spaces designed for 9.5mm hardware, which means it could be easier
to fit the Ultra II inside older PCs and laptops without the SSD
rattling around.

Should I Buy the SanDisk Ultra II 240GB?

The
240GB option costs a reasonable £100, which makes it one of the cheaper
SSDs we’ve seen recently. The modest price and TLC architecture means
mid-table performance, but that’s not necessarily a bad thing – in AS
SSD the Ultra II traded blows with the Crucial MX100, and the SanDisk
secured a convincing victory over its rival in the comprehensive Atto
suite.

The Ultra II faltered in IOMeter, where the MX100 proved a
tad faster, but neither of these affordable SSDs could match top-end
drives for pace – in the greater scheme of things, the Ultra II didn’t
lose much ground.

The reasonable AS SSD pace and solid Atto
performance mean we’d rather buy the SanDisk than the Crucial drive –
it’s more expensive, but it’s faster and a little more consistent.
There’s a sting in the tale, though, and it’s Samsung’s 850 Evo – it’s
only ten pounds more expensive, but it’s faster and has a better
warranty. Unless budget is important, we’d opt for the Evo.

The
Ultra II is faster than the Crucial MX100 in several key benchmarks,
and we’d be happy paying the extra cash for it. There’s a sting in the tale, though, from
Samsung’s 850 Evo, which is faster and only £10 more expensive.
The Ultra II is a good effort, but it’s not quite good enough.