Most of the time in the technology industry, it takes a specialist with long experience to produce truly brilliant products. The best digital cameras, for instance, are invariably produced by people such as Canon and Nikon – not Mustek or BenQ. The best sat-navs are made by TomTom, who make nothing else.


It’s rare that a company just pops up and produces a range of products, seemingly outside its area of expertise, which sweeps all before it. And as Sir Clive Woodward proved when he tried to break into football after being so successful in international rugby – it’s a tough thing to do, whatever industry you work in. 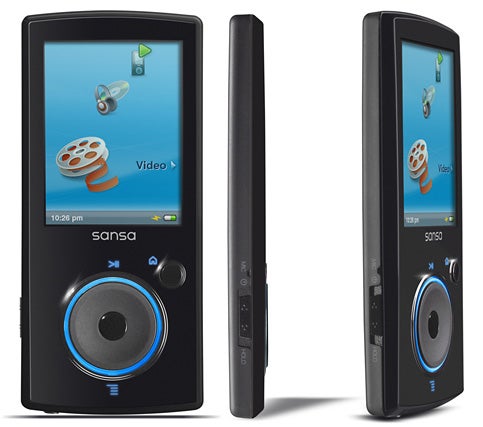 Yet that’s exactly what SanDisk has done over the past couple of years with its MP3 players. Its e-series of flash players targeted and soundly thumped the original Apple iPod nano in almost every area – they were much cheaper, looked great, were easy to use and had more features. And, more recently, it has done the same with Shuffle rival – the Clip. But time moves on, and though the e-series is still incredibly good value, other players – including the new iPod nano – are beginning to make it look old fashioned.


Step forward the Sansa View – SanDisk’s replacement for the e-series and its latest attempt to gain the coveted “why buy anything else?” recommendation the last player did. Can it pull the same trick off again? It’s no surprise to see that SanDisk has adopted the familiar tactic of squeezing as much in for as little money as possible, then taking each feature the nano has to offer and improving on it. It starts with capacity: the View is available in 8GB for around £100 while 16GB is £124, and there’s a huge 32GB flash model on the way too. That’s great value for money, especially when you consider that Apple only offers the nano in capacities of up to 8GB and at this capacity it’s about the same price as the 16GB View. 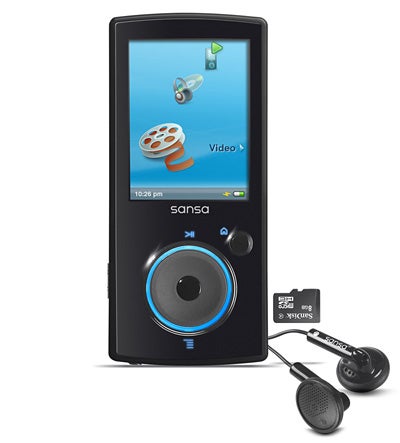 But price and capacity aren’t the only areas where the View soundly trounces the nano – and most other MP3 players on the market, for that matter. It also has a MicroSD expansion slot for adding another gigabyte or two in the (unlikely) event that you run out of capacity and there’s an FM tuner with 20 presets. There’s even the facility to record, plus an external microphone so you can use it as a dictaphone. The nano has none of these features and it falls behind on battery life as well. The View’s quoted 35 hours with music is 11 hours longer, and seven hours of video playback is not to be sniffed at either.

The View is not the iPod nano rival it once was in terms of design, however. Instead of shrinking the design SanDisk has chosen to make it larger. It’s still slim at 10.4mm, but the width and height (49.5 x 109mm) make it nearly three times the size of the nano and its polished black frontage and rubberised rear, though smart, doesn’t compare with the nano’s anodised aluminium finish. I was also disappointed to see that SanDisk has stuck with its proprietary interface for connecting the View to your PC or laptop.


If you’re into MP3 players doubling as jewellery, this is not the player for you, but the larger size and different design do have their advantages. First it’s a lot easier to hold without dropping. The nano, though beautiful, can be awkward to hold, and it feels slippery in your hand. Not so the Sansa View, whose rubberised back makes it feel much more secure. 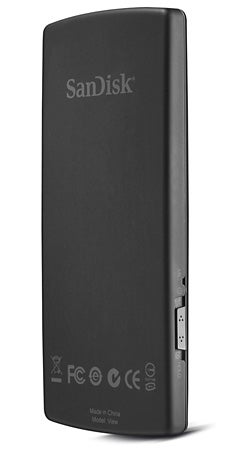 Second, and more obvious, is that it boasts a larger screen. The 240 x 320 resolution 2.4in display isn’t quite as bright and vibrant as the 2in one on the nano, but it is far larger, and that means watching recorded TV programs, video clips and movies is a more comfortable experience. It’s a bit more flexible than the nano when it comes to file formats, too: the View offers compatibility, not only with Apple’s H.264 format (mp4) at 30fps, but also WMV files, also at 30fps. This allows you to take your pick of video converter tools, including the many excellent ones specifically available for iPod products.


And video playback is handled well – it’s a big improvement over the way video was handled in the e-series, which split video into segments in order to make them navigable. Here, there’s a progress bar so you can cue and review through video effortlessly, plus you can drop in bookmarks if you’re rudely interrupted. 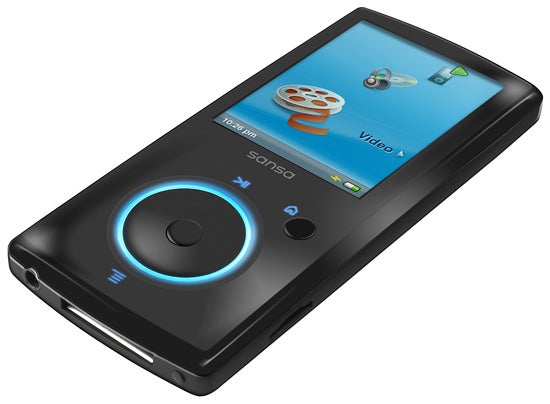 Another improvement over the e-series players is the mechanical clickwheel, which can finally be said to rival Apple’s touch-sensitive version. The e-series boasted a backlit plasticky ring, which worked well, but didn’t feel very nice to use; the View has dropped the ring in favour of a slightly dished rubber circle – about the same diameter as the nano’s control – with a small, raised button in the centre. It’s a joy to use, especially in conjunction with the View’s excellent interface which, though not as sexy as Apple’s, is extremely effective and easy to use, putting powerful features such as on-the-fly playlist creation intuitively at your fingertips.

The one weakness of the previous generation of Sansa players was sound quality, and although SanDisk has improved things it’s still not quite up there with the best. For starters, the View still won’t play lossless formats, which is a big disappointment on a player with this sort of capacity, although it does support non-DRM AAC (including HE AAC) in addition to the usual MP3, AAC and Audible formats.


To see how it sounded, I hooked up the Grado SR325i headphones I use as reference and started back-to-back listening tests against the Trekstor Vibez, using a selection of music encoded at 192kbps in MP3 format. 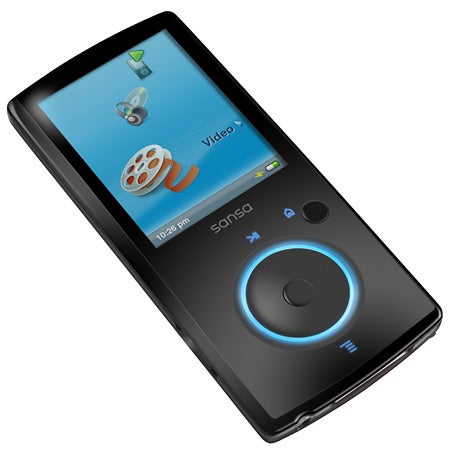 Georgie Fame’s ”Live At The Kentish Town Forum” album, with its big band sound, is a fantastic test of dynamics, loudness and smoothness, and it was immediately apparent that the View is a very bright-sounding player. It boasts impressive punch and loudness: switch the volume limiter off, and it’ll drive these large, supra-aural headphones to a decent volume. But it’s also obvious that the View still has that typical SanDisk lack of smoothness, which translates to slightly harsh, grating high notes. In comparison, the Vibez has a fuller sound that’s likely to be easier on the ear over extended listening periods. The iPod nano isn’t quite as forward or exciting to listen to as the View, but is as detailed and a lot more ear-friendly and laid back. 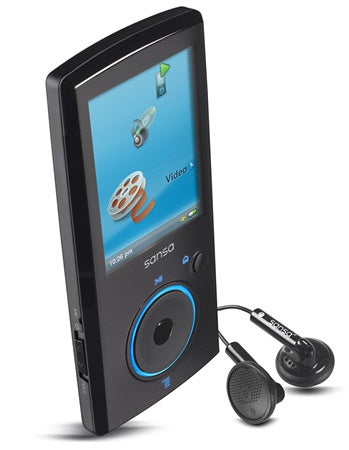 Moving on from live music to something a little more processed – Mary J Blige’s album ”The Breakthrough” – and the aforementioned lack of smoothness is still apparent. More obvious, however, and disappointing, is the distinct lack of low-end grunt and bass quality. It’s clear that despite the improvements, SanDisk’s players still don’t quite cut it in the sound quality stakes.


As a consolation, the bundled earbuds are surprisingly good – they’re quite punchy and reasonably well balanced – but Trekstor’s Vibez, Creative’s Zen, most Sony players I’ve listened to, and (to a lesser extent) Apple’s latest generation of iPods are better sounding players.


If you’re after the ultimate in sound quality, the View won’t be for you – there are better players out there. But you simply cannot deny the sheer bang per buck that this player offers. A 16GB flash player for under £130 is something no other manufacturer can come close to mustering: the 12GB hard disk-based Vibez is £20 more (without the video playback capability), and it’s double the capacity of an iPod nano for the same money. When you add the fantastic usability via the new click wheel, the FM tuner, and external mic to the equation, nothing else comes close for value.