SanDisk’s MP3 players have long been the popular alternative to Apple’s all-conquering iPod players. Over the years they’ve managed to couple great value with decent usability and pretty slick design too. And Sansa players such as the venerable e-series and the more recent View have always crammed the features in.


Surprisingly, though, it has taken SanDisk nearly a year to respond to Apple’s ‘new’ squat nano. We had the View months ago and the brilliant Clip, but neither took on the anodised iPod head on. The View was simply too big to rival its pocketability and the Clip too cheap and chirpy. Now that the Fuze is finally here, however, SanDisk at last has a direct competitor to Apple’s most popular player. 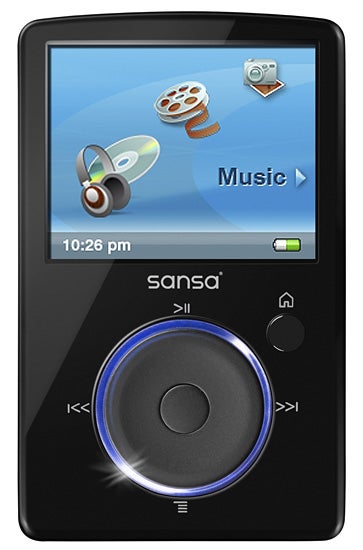 If imitation really is the sincerest form of flattery, then the nano can feel itself well and truly idolised. The Fuze is almost identical in proportion to the nano, complete with short/fat profile. A landscape 1.9in screen sits above a circular control cluster, with even the sync and headphone connections in the same place, ranged along the bottom edge. The Fuze is slightly narrower, width-wise than the nano and a little taller too. It isn’t as slim as the Nano, though, at 7.3mm compared to 6.5mm and it still can’t quite match the Apple player’s sense of style. 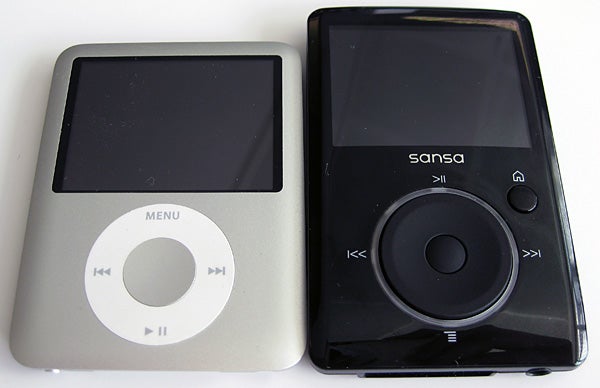 The Fuze is still a very nicely designed player, though, with a soft-touch rubberised rear and glossy front (available in more colours than just black, for the style conscious). Arguably the rubbery finish and slightly thicker profile makes it more comfortable to operate one handed, too. It isn’t quite as soap-bar slippery as the nano.

Capacities go up to 8GB – the same as the nano – and even battery life is the same, quoted at 24 hours for music and five hours for video, but from here on the two players begin to diverge. The 1.9in screen, for instance, has a much lower resolution (220 x 176 pixels) than the QVGA (320 x 240 pixels) one found on the nano. And, apart from the fact that the quality isn’t as good – colours aren’t quite as natural and it’s much more prone to reflections than the nano’s screen – it doesn’t support smooth 30fps video, forcing you to convert clips to a lowly, and much less watchable, 15fps.


Format support is limited to MPEG-4 files at native screen resolution too – a far cry from the excellent video support of the View, which supports WMV and MPEG-4 files at more than the native resolution of the screen (640 x 320). However, SanDisk does provide a free video converter tool for download from its website, which works very well and is easy to use.

The Fuze can’t match the nano in terms of video features, then, so how does it fare elsewhere? First up, though I like SanDisk’s interface, I have to admit that Apple’s still has the edge. The nano boasts a search facility and that fancy coverflow artwork browsing, while the Fuze’s is far more perfunctory. That said, it’s still extremely effective and when coupled with the Fuze’s excellent mechanical clickwheel – debuted on the View – it makes the Fuze a delight to use. 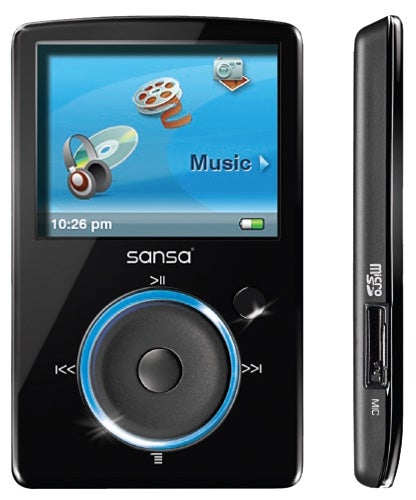 The Fuze steadily improves with the inclusion of an FM tuner – one that works pretty well too – and memory expansion in the shape of a microSD card slot. The nano boasts neither feature. The Fuze also has an external mic so you can turn it into a dictaphone or basic podcast recorder, and one more area where the Fuze has the nano beat is in its flexibility. It’s compatible with both MSC and MTP methods of file transfer, so you can use it with Windows Media Player to transfer DRM WMA tracks, or you can simply drag unprotected tracks and videos straight to the relevant locations if you prefer.


But the real challenge for the Fuze is in music playback, and it has a lot to live up to here. Its bigger brother, the View, disappointed when it came to audio format support. It failed to include support for lossless formats such as Flac, Apple Lossless and WMA Lossless, and the Fuze is the same. You can play back MP3 and WMA at bitrates up to 320Kb/sec plus Audible’s audio book format, but not AAC files as you can with the View, and there’s no support for Ogg Vorbis either (Ed. – A firmware update has now added official support for Flac and Ogg on the Clip and Fuze.) 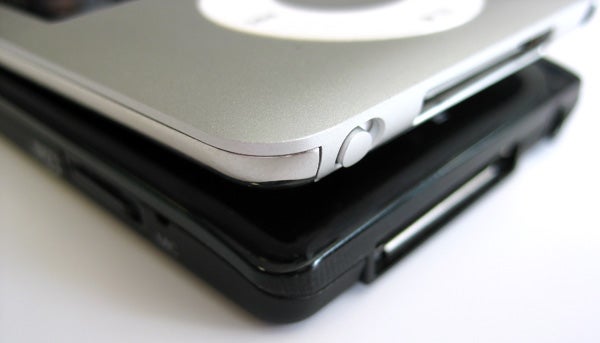 The View, too, wasn’t the last word in sound quality, and again the Fuze offers little redress. I plugged in my usual reference headphones – a pair of Grado SR325is to ensure there was no quality bottleneck and fired up Radiohead’s ”Hail To The Thief” to see how the player could deal with the band’s complex, swirling guitars and convoluted melodies. Detail was as impressive as it was with the View – every guitar riff had the aggressive, biting edge it was meant to have and the music leapt right out of the phones in a way it didn’t with the nano.


But as with the View, the rest of the spectrum isn’t quite as accomplished: the mid and bass notes aren’t warm enough, so that clarity and edge tends to overwhelm the rest of the music and make it sound harsh. To be fair, the nano doesn’t fair well with the thunderous end to ”Stand Up Sit Down” – its mid and bass is a little too warm, but the Creative Zen and Sony NWZ-A829 produced a more powerful sound with superior balance. A blast of metal underlines this – the opening to Metallica’s ”The Struggle Within” is strident and scratchy rather than crunchy and full-bodied – the nano beats it here with a much more rounded performance.

Moving onto something a little more sedate – Pat Metheny’s atmospheric ”Map Of The World” – and the harshness mentioned before is easier to live with, but the music just lacks something. There’s not quite the lushness here as you get with Sony’s NWZ-A829, the punch and power of Creative’s Zen or even the warmth of the nano, though the breadth of sound and imaging are very good and the hard edge is less of a problem. Lisa Ekdahl’s warm jazz serves to emphasise the lack of warmth, with the double bass not quite as meaty as I would like.


But if the sound quality is disappointing, the pricing is even more so. Where the previous generation of SanDisk players wowed us with their incredible value for money – and the View was no different, offering 16GB of storage for an incredible sub-£130 price – the Fuze seems to have got it a little wrong. 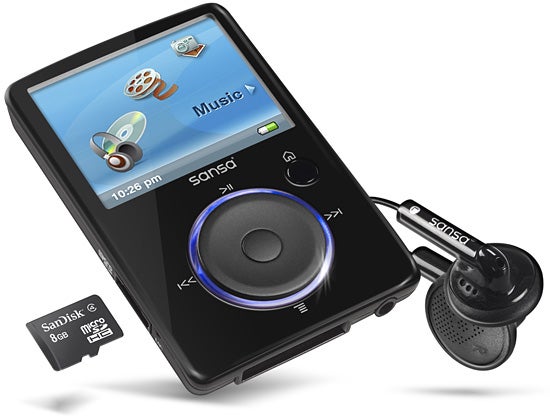 The 8GB version costs around £90. This is cheaper than the equivalent capacity nano by around £15, but not by much, and when you take into account the fact that the nano handles video much better (as does the Fuze’s big brother the View) and sounds smoother too, that small saving begins to look less enticing. It’s also worth nothing that the 8GB Creative Zen is cheaper than this too, at £79 at the time of writing for a player with a larger screen and better sound quality.


On the plus side, the Fuze is available in a smaller, 2GB variant that retails at a much more reasonable £55. Add a microSD card to increase the capacity and the price begins to look more reasonable.


Hopefully the initially expensive prices will fall, because without that advantage, the Fuze looks distinctly out of sorts. It’s a fine player with many worthy features, a lovely design and an interface that’s extremely easy to use, but it’s far from perfect.


Disappointing video handling, and sound quality that doesn’t quite match the competition means it has to undercut players such as the nano and Creative Zen significantly on price. Unfortunately, the price isn’t quite low enough.