It’s been a while since SanDisk appeared out of nowhere and launched its nano-beating e200 range of MP3 players. Our very own Gordon Kelly was highly impressed with the e260 and the range is due for another refresh very soon. We’re expecting the new line-up to offer even more features in a package that’s equally as competitively priced as the one before, but it’s been the subject of frustrating delays and now looks like it won’t be available for a good few months yet. 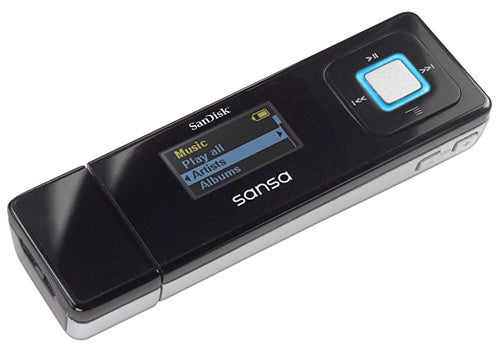 In the meantime SanDisk is filling the void with its diminutive USB stick player, the Sansa Express, and it adopts much the same approach to the task of MP3 playback as its bigger brothers and sisters – that of packing in as many features as possible and then charging less for it than the competition.


In football, rigid tactics like these work fine but you have to have an extraordinary player who can do the unusual – pop up out of nowhere and bamboozle a defence before scoring a stunning goal – if you’re to have any success. Fortunately, in the case of the Express, it has a star player: a memory expansion slot.

Most mid-range players lack this feature, so to find a microSD slot on one costing just a fraction more than £30 (for the 1GB version) is remarkable. It’s certainly more than most of the competition is offering and puts the Express out in front in a class of its own. With 2GB microSD cards available now for pin money you’ll be able to triple the capacity of the 1GB player and turn the 2GB unit into a 4GB player for well under a tenner.


The Express goes on to offer a full colour, four-line OLED screen, which is bigger than the Sony NW-E015’s and much more readable than Creative’s monochrome effort on the Zen Stone Plus. It has better battery life than the Zen Stone Plus too, with 15 hours playback available at moderate volume and bit rates. Obviously if you listen to it louder and at higher bit rates this will drop.

It also has an FM tuner, another surprising inclusion in a player at this price, considering the extra tax the EU imposes on players with built-in FM tuners. You also get an external microphone and, to top it all, on-the-fly playlist creation. This is a feature we’d like to see more of but it’s still missing on the majority of players. It’s not perfectly implemented here – you have to be playing a track in order to add it to the player’s ‘Go List’, so you can’t queue up tracks as you can with the Trekstor Vibez, for example – but it’s still a feature that’s nice to have.

But it’s not just the specifications that set the Express apart from the crowd. As with all SanDisk players, it is nicely made and well put-together. The mirror-effect front panel and OLED display look particularly swish together and the rubberised four-way selection pad is much more pleasant to use than the controls on either the Sony NW-E015 or the fiddly Zen Stone Plus. Don’t expect navigating long lists of albums or tracks to be easy, however. As with most small players with tiny screens, this can be laborious on the Express. 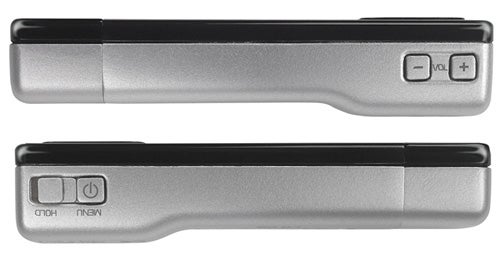 Obviously the Express is larger than either the Shuffle and Zen Stone Plus too, but this does have its advantages. There’s that screen first of all, but also an integrated USB connector that allows you to charge the player and add files directly without the need for an extra cable. On that note, it’s also worth mentioning that you can simply drag tracks straight onto the Express, or simply use Windows Media Player to sync your music – you’re not forced to use proprietary software as you are with Sony NW-E015.

Like a football team that plays scintillating attacking football, but concedes goals from set pieces too often, the Express does have a flaw. And it’s in the crucial area of sound quality where the player falls down. It doesn’t offer quite the same level of detail and clarity that the Creative Zen Stone Plus does, nor can it match the sheer breadth and depth of the aforementioned Sony player or the iPod Shuffle for that matter.

Listening to a few tracks from Biffy Clyro’s magnificent new album, Puzzle, revealed a slight thinness in sound – and that’s accentuated when you pump the volume right the way up. Nor does the Express support OGG or any of the lossless codecs – WMA Lossless, Apple Lossless or FLAC. It does, however, play protected DRM WMA files, MP3 files up to 320kbit/s and standard WMA files up to 192kbit/s. 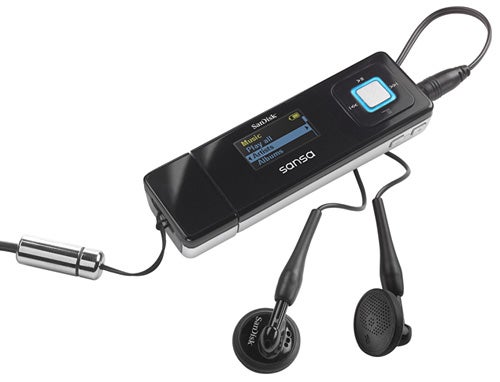 On the other hand it’s by no means bad, and if all you’re using it for is music to go with your workout, there’s really nothing major to complain about. The earbuds supplied in the box are pretty good too, and streets in front of the phones supplied with either the Sony NW-E015, the iPod Shuffle or the Zen Stone Plus. They’re a bit muffled-sounding in places, but there’s absolutely no hiss and they’re surprisingly full-bodied considering the overall price of the player.


As with all of the competition at this price, the Sansa Express has its weaknesses. In this case it’s a slight deficiency in the sound quality department and file format support. However if it’s features you want, headphones that won’t need replacing straight out of the box and the potential for a cheap memory upgrade, there really is no competition at the price. In the world of budget, flash-based MP3 players it’s truly championship-winning material.