If you’ve read our memory card roundup, you’ll know that a number of factors influenced – even limited, the read and write speeds of each memory card. One of these factors was the card reader itself and it was interesting to see how different readers gave different transfer rates when shifting images and/or files to and from the PC – a key step in many digital workflows and one that can truly frustrate the user if it takes a long time.


This workflow bottleneck comes about because many of us go out and buy a memory card and then use it in a card reader without any idea how well they’ll work together. To address this from a manufacturer’s point of view, the obvious answer is to develop both a memory card and reader together so that maximum compatibility, efficiency and data throughput is achieved and sustained. 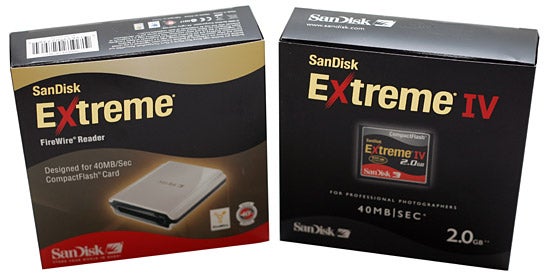 One company that has taken this approach is SanDisk. It recently launched the new Extreme IV CompactFlash (CF) card along with a new Extreme FireWire reader. When used together (on a FireWire 800-enabled system) the company states that minimum read and write speeds of 40MB/sec can be achieved, although bear in mind that those figures are derived from SanDisk’s internal test data where 1MB equals 1,000,000 bytes.


We on the other hand work to the fact that there are 1,024 bytes in a kilobyte and hence 1,048,576 bytes in a megabyte. Using our calculations, we expect to achieve less than the 40MB/sec quoted by SanDisk, and much less in tests with a Canon EOS-1D MKII and an EOS 5D where we expect to see camera-limited results.

Before we find out how fast the card is, let’s have a look at what you get for your £165. First of all there’s the actual card – in this case a 2GB one (the Extreme IV is also available in capacities of 4 and 8GB). The card design is typical of SanDisk but internally, it’s one of the only CF cards that uses a controller compliant with the UDMA 4 transfer protocol. It also has an extended operating temperature of -25 to 85C.


As for the Extreme FireWire reader, this is a well-made silver unit with a single CF slot, a 9-pin FireWire 800 port at the rear, and a rubber pad on the bottom for added grip. The reader’s controller is compatible with both FireWire 800 and FireWire 400 and also supports UDMA 4. A cable for each FireWire standard is supplied, as is a 30-day trial version of Adobe Photoshop CS2, and a copy of SanDisk’s RescuePRO (Version 3.0) for recovering images and other files that have been deleted. 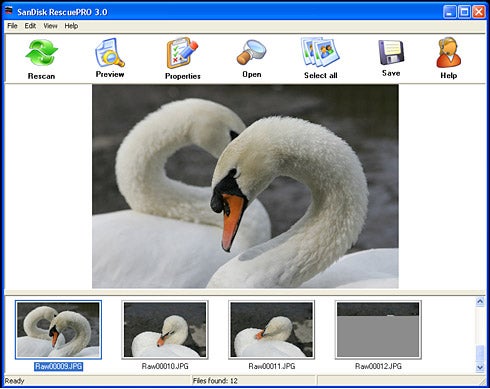 I’ve tested RescuePro before and have been impressed with its ability to scan any flash card and display a preview of the recoverable data, even after formatting. You can then choose to restore some or all of the recovered images/files to another directory on your PC, or if need be, permanently erase the card.

Back to the question of performance. Just like our memory card roundup a similar testing methodology was used (see the last page of this review for details). As a guide, the Extreme IV’s results have been graphically compared to the 4GB cards featured in that roundup. This gives an indication of read/write performance when using a SanDisk ImageMate multi-slot reader and the Extreme FireWire reader to transfer images in a single directory. Furthermore, the Extreme IV card has been tested in a Canon EOS-1D Mark II and a Canon EOS 5D for comparison.


Looking at the graphs on the third page, it’s clear that both camera’s are limiting (not taking full advantage of) the Extreme IV CF card. There is a slight improvement over Lexar’s 4GB Professional 133X CF card, but it’s hardly noticeable in practice. In addition, both cameras show a similar write performance to each other, both hitting the 7MB/sec mark.


As somewhat expected the Extreme FireWire reader coupled with the Extreme IV card has produced some of the fastest card-to-PC transfer rates I’ve seen. Over the FireWire 400 bus of our test system, an average read speed of 29.5MB/sec and a write speed of 15MB/sec were achieved. Ok, not quite the 40MB/sec rating that SanDisk states, but that’s under ideal conditions. That said, these figures should increase over a FireWire 800 connection, especially one found in a high throughput system like the Power Mac G5 or Mac Pro. Check out this enthusiastic exploration of the various read speeds obtained in a number of systems.


It’s also worth noting when the USB 2.0 SanDisk reader is used, the Extreme IV card reverts to a more sedate 8MB/sec read and 6.7MB/sec write speed – more or less similar to the other top-perfroming CF cards and thereby suggesting that the reader and USB interface are key limiting factors. 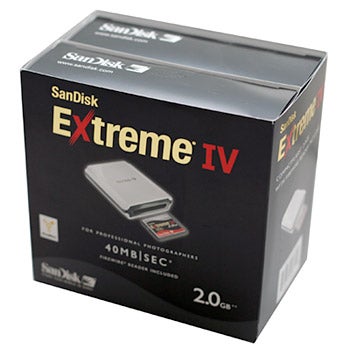 That all goes to show that when the card reader has been designed with the actual card in mind there’s little to beat that combination. It ensures full compatibility and, if like SanDisk, you throw in support for the UDMA 4 transfer protocol over FireWire’s renowned sustained data transfer rates, then there’s little that comes close. In my opinion, and if you’re a photographer who wants to speed up the “transfer to my PC” part of your digital workflow, the SanDisk Extreme IV 2GB CF card with Extreme FireWire reader bundle makes a great choice.


For £165 at the time of the review, SanDisk’s Extreme IV CF card and reader bundle may not be cheap, but it does represent reasonable value for money – especially when you know that high file transfer performance is pretty much guaranteed with a FireWire-enabled setup.

• Reconnect reader, place card back in


To calculate the write speed in the Canon EOS-1D Mark II and Canon EOS 5D a continuous burst (8.5fps in the 1D and 3fps in the 5D) of Large JPEG images (highest quality) was used to capture a standardised scene. The stopwatch was started when the camera’s card access lamp lit up and then stopped when it went out. The total MB of the images captured was summed and divided by the time recorded. The following protocol was used:


All tests were repeated and an average taken. The PC is rebooted and the reader unplugged between tests to ensure the PC does not cache the test files. Anti-virus software was also disabled.


”The tests carried out in this article reflect the performance of each card as used with the stated data types, card readers, computer system, and cameras. The performance is subject to the equipment used.”