What is the SanDisk Clip Sport?

The SanDisk Clip Sport is an MP3 player with an integrated belt clip, which turns it into a pretty handy gadget for runners and gym fans. It’s also small, light and fairly cheap. It’s not all that much different from the previous SanDisk Sansa Clip Zip, but a doubling of battery life makes it a better player.

Convenience and portability are two of the main aims of the SanDisk Clip Sport. Its footprint is smaller than an iPad nano’s, and it is almost completely free of gimmicks.

There’s no touchscreen operation, no weak internal speaker, no Bluetooth or NFC. A no-nonsense approach is something that might be considered a side effect of being made by a company that doesn’t need to make music players that ‘stand out’. It offers a cheaper, mostly-reliable alternatives to Apple’s players. That’s it. 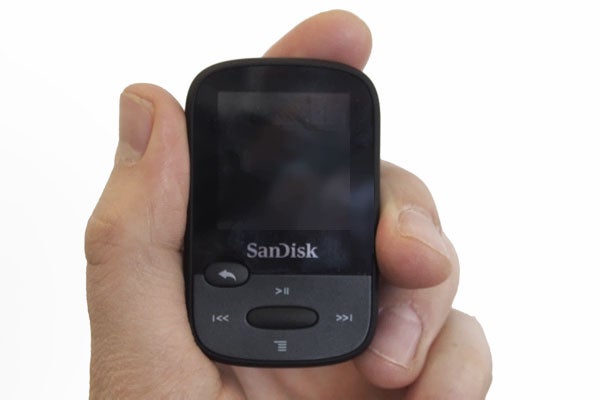 The SanDisk Clip Sport is an all-plastic player with six clicky buttons on its front and a volume rocker on the side. It feels fairly well-made, although nowhere near the level of the simpler, metal iPod shuffle.

It’s a little bit slimmer than the Zip Clip we reviewed two years ago, but otherwise they’re very similar. There’s a chunky belt clip on the back and an exposed microSD slot on the right edge. There’s no worrying flexing, but the plastic screen cover is likely to get scratched fairly quickly if you’re not careful.

Although SanDisk labels the Clip Sport as an MP3 player for active types, there are just two features behind this. One is obvious – the belt clip. The other is a pretty basic pair of Sport ‘apps’. You get a timer and a stopwatch. These were present in the Clip Zip too, pretty much confirming that this player has only been conspicuously labelled a ‘sport’ gadget to aid sales and marketing – it’s the same as the other Clip players really. 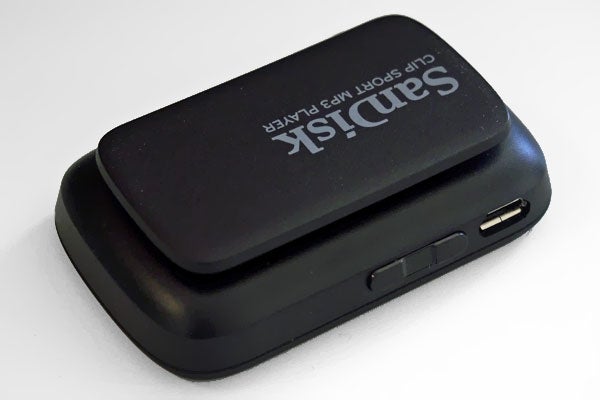 Adding Bluetooth would have made this more convincing (headphone cables can get in the way when you’re running), but would have doubtless have upped the price too. The 8GB version of the player costs £49.99, the 4GB £35.

The SanDisk Clip Sport’s design is pretty handy. When held single-handed the buttons are easily accessible with a single thumb, and the side volume rocker is heavily contoured so you don’t need to look at the thing while changing volume.

There’s one clear hardware feature missing – a lock switch. We complained about this last time we reviewed one of SanDisk’s players, and nothing has changed. If you’re using the Clip Sport as a sporty player it’s not a deal-breaker. However, it’s not so great if you want an everyday player – changing tracks accidentally while it’s in your pocket is common and clipping it on your clothes in a busy city environment is a sure way to get your player nicked.

There are also none of the neat extra bits you get in one of Apple’s players. The Clip Sport won’t work with earphone remote controls, it won’t remember where you were navigating in your music library should you leave the player for quite a while, and it won’t pause music when you unplug your earphones.

It’s cheap and cheerful, and suitably comes in a bunch of colours. We only tried the boring black version, but there are five additional shades. They’re not all available in both storage sizes, though. This is another pretty common criticism of the Clip line-up that remains unfixed.

Aside from the buttons, a lead hardware feature is the SanDisk Clip Sport’s screen. Some MP3 players at the price don’t have a screen at all.

It’s a 1-inch 128 x 128 pixel LCD display. That’s slightly higher-res than the 96 x 96 pixel screen of the Clip Zip, but it’s still pretty low-res compared with today’s phones, and the 240 x 432 pixel screen of the iPod nano. As we saw with the Clip Sport’s build, it’s not quite Apple-grade. The panel quality is just OK, with pretty severe contrast shift should you turn the screen at the wrong angle. 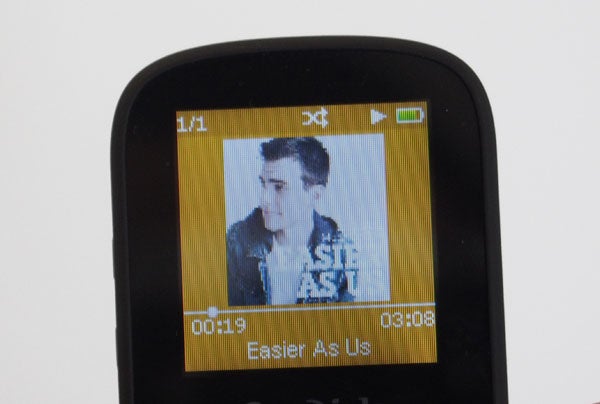 But it’s not bad. It’s a full colour display, and the interface makes good use of the colour palette. It’s bright, it’s colourful and quite simple too, with none of the fiddliness of some other budget players.

However, during playback the artist and track names get severely sidelined in favour of album art. We’d prefer to see clearer track details, especially as the album covers don’t look great on such a tiny, low-res screen.

Extra beside the stopwatch include an FM radio, a file browser and a document reader, which isn’t much use thanks to the small screen size.

These days a small cheap player doesn’t need to mean a compromise in sound quality. The SanDisk Clip Sport offers decent sound quality and – as long as you don’t select Europe as your region – masses of volume.

You’re asked to select your region upon start-up, and if you select Europe the player is subjected to extremely aggressive volume limitating that effectively ruins the player with any earphones that are remotely hard to drive.

To get a proper view on the SanDisk Clip Sport’s sound quality we compared it with an iPod Classic – a benchmark of reasonable, but not staggering, sound. Maximum volume on the SanDisk is greater, and the width of the soundstage is quite similar.

However, presentation of the mid-range is different. The Clip Sport has much more up-front, harder mids, making vocals sound closer to your ears. The softer, more diffuse mids of the iPod Classic are a little easier on the ear, and the Clip Sport can sound a little harsh at times. However, in pure sound quality terms they are roughly comparable – not great, but decent. 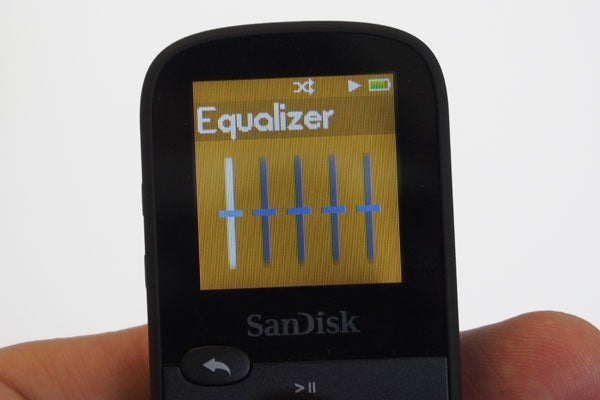 A big sound quality win for the Clip Sport, though, is codec support. As well as the usual AAC and MP3, the player supports FLAC and OGG files. These aren’t supported by iPods, or Sony’s low-cost ‘sporty’ MP3 players.

There is an EQ to hand too, but it’s pretty poor. The presets are rather crude, and the custom ‘user’ mode isn’t sophisticated enough to be particularly useful.

It’s the same setup we saw in the Clip Zip. However, battery life has been improved hugely since that model. It has gone from 12 hours to 25. These numbers relate to playing 128kbps MP3s on loop, so actual performance will be a fair bit worse. However, it means the difference between charging once a week and every couple of days – a huge improvement. We got through a week’s use off a charge.

You get a pair of earphones in the box, and they’re of reasonable quality. They’re IEM-type isolating earphones – a bit bassy and with just entry-level sound, but not terrible. 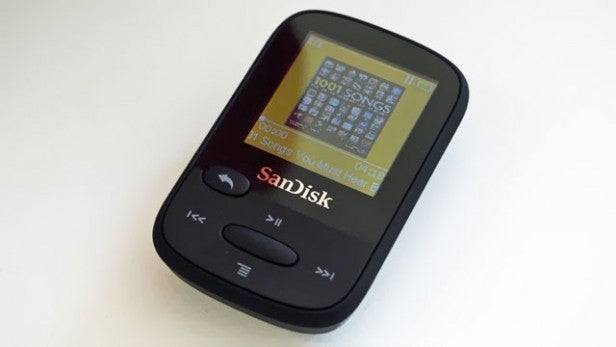 Should I buy the SanDisk Clip Sport?

The SanDisk Clip Sport is a pretty practical MP3 player at a reasonable price. You get storage expansion, a colour screen and good file support for £40. And that’s not bad. You can save even more money if you go for a ‘no-brand’ option like the Kubik Evo, and aside from better battery life there’s hardly any benefit over SanDisk’s older players. Still, battery life matter.

The MP3 player market is in such a diminished state that we’ve learnt not to expect much ‘innovation’ in new products, and you don’t find it here either. However, it’s a good budget alternative to an iPod shuffle.

The SanDisk Clip Sport is a small, fairly cheap MP3 player. It doesn’t have the gloss of Apple and there are few improvements over old models, but it is better.

Next, read about the best non-Apple MP3 players