Flash memory based music players are everywhere and if you are looking for a player, then you’ve got plenty to choose from. But Apple has ‘mindshare’. Its nano and iPod brands seem to have become generic terms for players (the shuffle is not so lucky), and the physical design of the nano is clearly the inspiration behind Samsung’s YP-Z5.


The YP-Z5 comes in 2GB and 4GB capacities. The former will set you back around £130 while the latter costs around £170. Each is available in black and silver. I was sent a 2GB model in black to try out.


Physically there are both similarities and differences to the nano. It keeps the rectangular format, with a screen at the top and controls below. While the YP-Z5 is a shade thicker it’s no giant – at 42.2mm wide x 89.8mm tall x 11.4mm deep. The 4GB version is slightly fatter at 12.3mm deep. As such it will be easily encompassed by all but the smallest of pockets.


However, its sliver metal edging inevitably capture grease from your fingers and overall it doesn’t actually look as polished a product as the nano.


The right edge features a long, thin volume rocker, while the top edge sports a hold button, a 3.5mm headset jack, and a hook for a lanyard strap (not provided). The bottom edge houses a PC USB socket and a reset hole. I’ll get to the front controls in more detail later. 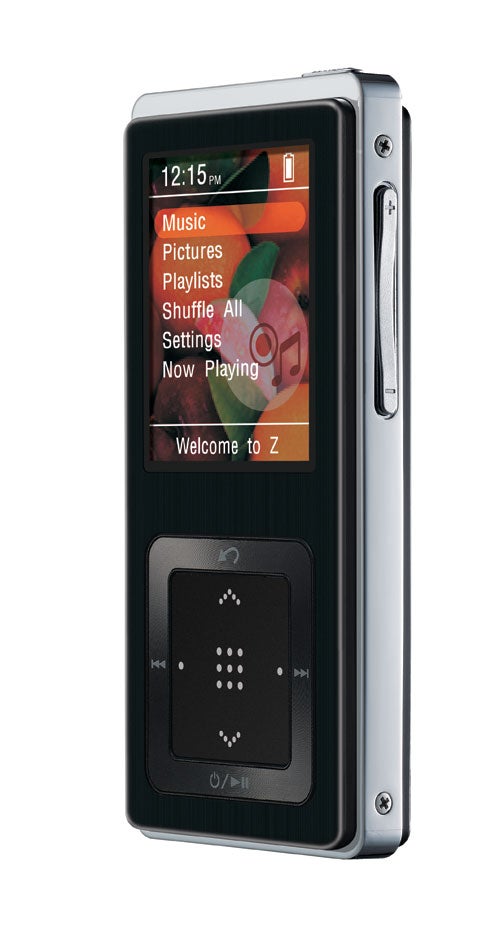 Samsung has stolen quite a march over Apple in terms of battery life with Samsung saying that the YP-Z5 will last for 35 hours – two and a half times the 14 hours claimed for the nano.


As well as playing MP3 and WMA, the YP-Z5 displays pictures (only JPEGS) on its 128 x 160 pixel, 1.8 inch LCD screen. You can view them individually and run a slideshow with or without musical accompaniment. The slim and pretty rudimentary printed quick start guide doesn’t explain how to get photos onto the YP-Z5, though, and only shows you how to get music across by synchronising with Windows Media Player 10.


The good news is that you don’t have to do it this way as you can drag and drop music onto it or use the YP-Z5 as a virtual drive. Just plug in the supplied USB cable to your PC and you are set to copy files across. The file structure on the YP-Z5 is pretty obvious, so it is easy to see where to copy music and pictures to. There are two folders at start up. Open the one labelled Media and two more appear – Music and Pictures.

It is irritating that this openness is scuppered by a proprietary connector at the YP-Z5 end of things. A mini USB connector would have been so much more convenient.


When it comes to actually listening to music, sound quality is excellent. There’s an equaliser with plenty of presents should you want to refine it further. The provided headset is really very good, and if you don’t mind the in-ear buds then it should suffice. My own preferred Sennheiser PX-200’s delivered really nicely too. There is plenty of volume available and at the highest setting it was actually too much for me. So no complaints there.


The screen, too, is wonderful as it’s large, bright and clear. As you move around within menus they zoom towards and away from you in a manner that’s easy on the eye.


Pleasingly in the menus, there’s support for the composers tag – very handy if, like me, you are a fan of classical music and like to use Artist for the performer and Composer for, well, the composer.

But there is a major problem with the YP-Z5 and unfortunately that’s the control system. The area under the screen is made up of a central section and an outer ring. Each of the four edges of the outer ring has an assigned function and I had no problems with these. Play and Pause, and moving sequentially between and through tracks and getting to the main menu were all straightforward.


It was the central section that caused me problems. There are left, right up and down directional movements and the ability to ‘select’ but getting what you want will require either a harder or a softer press on the relevant area. You need a light tough to scroll, a firmer press to select and I found it incredibly frustrating getting the degree of pressure required just right. Additionally, scrolling through lists, be they menu options or tracklists, is incredibly fast – so fast, in fact, that it is easy to miss what you are scrolling for. All in all, getting round the player can be far more frustrating than it should be, but I did get the hang of it in the end.


Overall, the YP-Z5 succeeds because it produces very good quality sound output, has a lovely screen, and you can drag and drop music and picture files from your PC. Its long battery life is the icing on what is already a very nice looking cake indeed. But there’s a rather nasty taste left in the mouth thanks to that awkward control system, which lets the YP-Z5 down a little.