Right now, there’s no doubt what the coolest gadgets of the moment are in the minds of the digital music-buying public. It’s the latest touchscreen-driven devices from Apple. No matter what your preferences or which technological axe you may have to grind, you can’t possibly deny that both the iPhone and iPod Touch are amazing examples of what can be done with a simple concept and great software and hardware design.


The big problem is that to get your hands on one of these you have to fork out quite a bit of cash. We all know how expensive an iPhone is – even before you get to the price of the obligatory contract – and those who don’t want the phone still have to pay through the nose for the Touch. 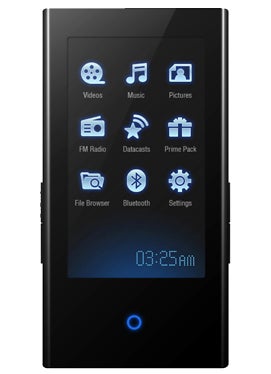 But there is another way to get your hands on a sexy, touchscreen music player, and it’s called the Samsung YP-P2. It’s clear from the start that this is trying awfully hard to match the iPod Touch. It has a hard touchscreen with very little else in the way of controls on the front panel. It even looks the same, though the small circular element on the short edge of the screen turns out to be merely a status light, not a home button as it is on the Touch.


A closer look, however, reveals this isn’t a straight rip-off after all, and in many ways it’s the more practical music player. For starters, it’s much smaller and more pocketable than the Touch. At 100 x 52 x 9.9mm and 85g it’s not going to get into the teeny-tiny hall of fame any time soon, but it’s a darned sight more svelte than the Apple device and it’s put together just as well too. Though the screen attracts greasy fingerprints like a dirt magnet, it seems highly scratch resistant, and the rest of the device is extremely solid.


It has dedicated hardware controls for common functions, which is something the Touch lacks: volume controls are sited on the right spine, while the power button and hold switch are on the right, which just add to the usability of the player and mean the volume can be adjusted whether you’re in menu or music view. And another feature missing from the Touch that you get here is an FM tuner. Strangely, though, there’s no voice record mode despite the presence of an external microphone.

By preferring Bluetooth to Wi-Fi, the YP-P2 has arguably the more useful wireless feature; at least as far as music listeners are concerned. This allows you to connect the YP-P2 to most headsets and Bluetooth speakers for wire-free listening and control. I tested it with a Parrot Party speaker and a pair of Cerulean F1 stereo Bluetooth earphones and found that it worked perfectly. There are rumours on the Internet that you can also use the YP-P2 as a wireless headset by pairing it with your phone allowing you to listen to your music and take calls seamlessly, but alas this feature wasn’t available on the test device. Perhaps it’ll become available in some future firmware release – that would at least explain the currently-redundant microphone. 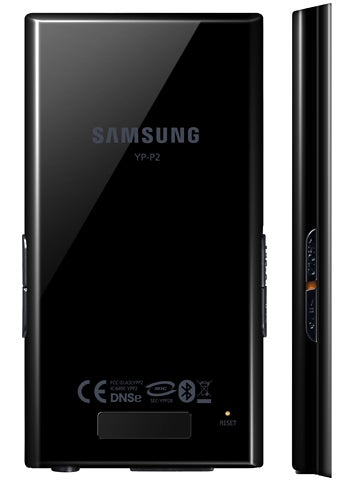 You’ll need to bear in mind, of course, that using the Bluetooth connection has an impact on battery life. It’s a good thing it starts off impressive, at 35-hours worth of battery life without it on, because switching over to wireless mode drops it to an acceptable-but-underwhelming 12 hours. Watching video with Bluetooth on is unlikely to result in usable performance; it starts at five hours with Bluetooth turned off. But there’s another reason not to use Bluetooth: it would mean you missing out on this player’s strongest suit – its sound quality.


The last Samsung player I reviewed was the YP-T9, which was underwhelming in this department. Not so the YP-P2. Helped by some seriously beefy power output specs (22mW per channel), it has the sort of punch and power that the iPod Touch (and associated Apple products) can only dream of. It isn’t quite as clear at the top end and in the mids as I’d like, but the sheer oomph on offer balances this out, and means that larger, more difficult to drive headphones can be used without having to resort to an extra headphone amp to reach satisfactory volume levels. The earbuds in the box, by the way, are okay but nothing out of the ordinary. You’ll need a halfway decent aftermarket set to take full advantage of the YP-P2’s capabilities.

I began my listening tests with a bit of KT Tunstall, and after a few minutes it became clear that the YP-P2 can’t match players such as the Trekstor Vibez and Creative Zen for clarity and atmosphere. But where it does perform well is with louder rock and electronic music – Biffy Clyro’s ”Puzzle” is pounded out with a real sense of purpose and Robert Miles’ ”Dreamland” is delivered with an equally positive sense of purpose. It’s great for quiet recordings too. I have a recording of the unparalleled John Williams playing Villa Lobos’ ”Asturias” which other players, including the Trekstor Vibez and iPod Touch, struggle to play loud enough to render enjoyable. That’s not the case here, with the plucked nylon strings gaining a real sense of attack. 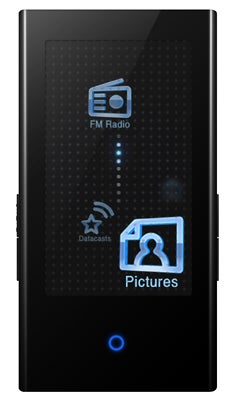 Watching video on the YP-P2 is a similarly pleasurable experience. The 3in screen might not be quite as big as that on the Touch, but it is crisp, fast and colourful and watching video on it is as comfortable as I can imagine it being on a device this small. You will have to do a fair amount of file conversion as it won’t play stuff back properly that’s larger than its screen resolution and it doesn’t play DivX or XviD files natively. However, this is the case with most other video-enabled flash players.


I liked the interface too. The touchscreen doesn’t work quite as well as the Touch’s – it just doesn’t seem quite as accurate or as responsive – but it offers access to similarly funky menu features. A flick of a finger up or down the screen in track or albums lists activates an impressive ‘realistic’ scrolling animation that sees the lists move quickly at first, then slow down gradually and stop. In the music view, sliding a digit up or down the right side of the screen controls the volume, and in the main menu a swipe activates the attractive-looking 3D icons, making them fade into and out of view as if you were flying through them.

If that wasn’t enough, you can also choose between different menu styles. In addition to the 3D menu, which isn’t the quickest way to get around the device, you can instead have an image of your choosing in the background with the icons running along the bottom of the screen, or plump for a simple matrix-style menu with all the icons arranged in a plain old grid. Other nice touches include the ability to create playlists on the device and browse by folder as well as ID tag – useful if you’re into your classical music and own lots of obscure Naxos recordings. These are rarely tagged consistently on the various CD information databases.


Not even the price should put you off. Again, it’s not exactly bargain basement but around £99 for the 2GB model, £109 for the 4GB and £150 for the 8GB puts it firmly in iPod nano territory, and apart from its slightly larger size this is in every respect the better player. Compared to the Touch, which is around £200 for the 8GB model, it’s looks positively cheap.

Of course there are some negative points. The YP-P2 doesn’t have the world’s greatest file format support. All you get for music is MP3 and WMA (both protected and unprotected), and SVI (an MPEG4 format) and WMV for movies. Another annoyance is that the player uses a proprietary connector for connecting to your PC. And despite the fact that you can drag and drop to it, it’s only an MTP device. So it’ll work with Windows Media Player in Windows and not much else; Linux and Mac OS users will miss out.


I’m willing to overlook the niggles because I like the YP-P2 a lot. Not only is it an extremely attractive and well-built device, it’s also easy to use, is stuffed with features – including that Bluetooth functionality – and has superb sound quality and a wonderful screen.


In its 8GB guise it is a little more expensive than the nano, but if you’ve fallen in love with the touchscreen way of doing things and just can’t bring yourself to pay £200 for the 8GB iPod Touch, why not go for a YP-P2? It doesn’t have Wi-Fi, but it is a cheaper, slimmer and more compact alternative.