MP3 players are fast becoming commodity items. With its recent price drops, even Apple’s players don’t command a significant premium over the competition – a fact that makes life very hard for non-Apple branded products. Rightly or wrongly, given the choice, most consumers will go for an iPod if it’s not going to cost them any more than a similar device from another manufacturer.


Samsung is well aware of this situation and has decided to compete with the dominance of Apple by innovating. The YP-K5 is the result of many design concepts and focus groups, with the goal being a truly innovative digital music player that could not only compete with the iPod but better it. 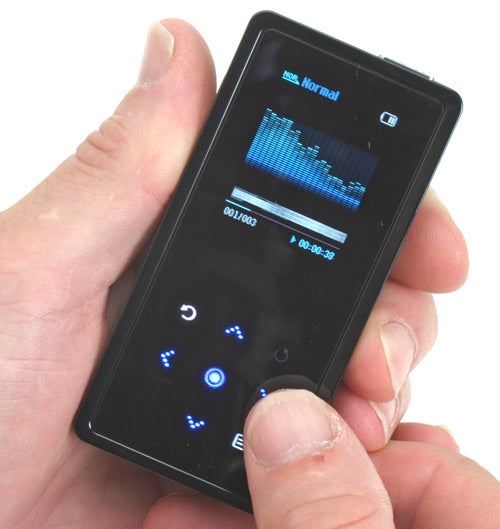 The K5 looks pretty sleek, with what appears to be an all black fascia when it’s not turned on. Once you feed it some juice though a bright OLED screen bursts into life and you notice a full array of touch sensitive buttons. Control is handled by four arrow buttons, with an OK type button at the centre – pretty standard fare. You also get a menu button and two back buttons – more on that later. I’m not the biggest fan of touch sensitive buttons, but I can’t complain too much about the controls on the K5. You definitely need to flick the “hold” switch when you put the device in your pocket though, unless you want the volume randomly increasing or the track jumping.


On the top edge of the K5 is a sliding power switch that toggles the device on and off. Push this the other way and it acts as the hold switch. At the other end you’ll find a standard 3.5mm mini-jack and the charging/synching connector. It’s a shame that Samsung hasn’t gone for a standard mini-USB connector, but then neither does Apple. There’s no mains charger in the box, but the K5 will obviously charge over USB while it’s connected to your computer. 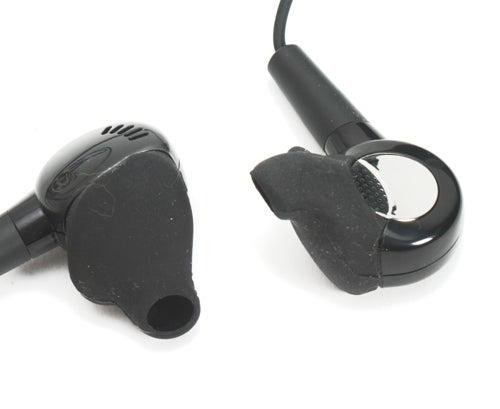 The headphones that Samsung bundles with the K5 are definitely a cut above the norm. They’re described as bass boosting headphones, and they go some way to living up to that moniker. Rather than standard ear buds, these headphones do insert slightly into your ear canal, but not completely like the Ultimate Ears or Shure headphones that I’ve reviewed lately. Unfortunately the Samsung headphones are not the most comfortable I’ve ever used, and even though they’re better than most bundled items, I’d still recommend spending some cash on a decent set.

Assuming that you do invest in a decent set of headphones, you’ll be treated to some pretty good sound quality from the K5. I tested it using a set of Ultimate Ears super.fi Pro dual-driver headphones and the K5 gave a decent account of itself. I kicked off with Glory Box by Portishead, with its combination of haunting vocals and heavy beats – the result was a clean sound where the subtle tones were not overpowered by the heavy bass. Changing tack completely I fired up Cochise by Audioslave and despite the overdriven guitars I could clearly pick out every syllable of Chris Cornell’s vocals. The K5 definitely sounds slightly better than my 4th generation iPod, although still not quite up to the standard of a Sony player such as the NW-A1000. 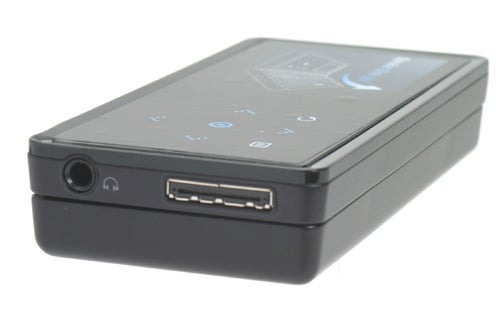 The K5 supports MP3 and WMA codecs up to a maximum bit rate of 320Kbit/sec and 192Kbit/sec respectively. Unfortunately the K5 doesn’t support OGG Vorbis, which produces better sound quality than both MP3 and WMA, even though previous Samsung players that we’ve looked at did support OGG. Samsung informed me that OGG support may be included in a firmware update, but if that’s true, I don’t see why it’s not there now.


The K5 also has a built-in FM tuner, which works surprisingly well, even in the poor reception area of the TrustedReviews office. You can also view photos in JPEG format – they look surprisingly good on the OLED display too. Conspicuous by its absence is any form of movie playback, but to be honest I wouldn’t ever want to watch video on a screen this small.


Talking of the screen, when you’re indoors it’s incredibly easy to see, but if you’re out in bright sunlight, it can be almost impossible to make anything out. Obviously LCD screens can also suffer in bright sunlight, but not to the level of this OLED example. 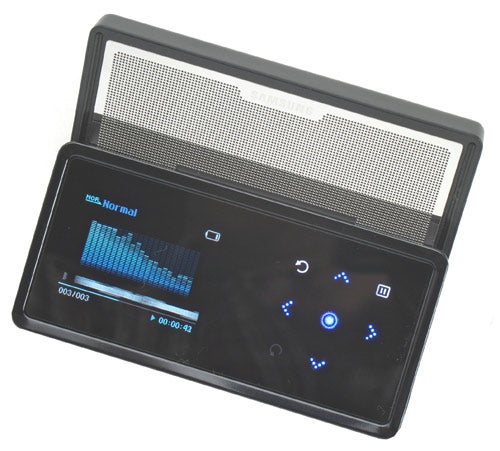 But as I said at the beginning of this review, the K5 is all about innovation and that comes to light when you slide the front fascia of the device sideways and reveal an integrated stereo speaker. The sliding mechanism feels very similar to the system employed by the Samsung mobile phones – it slides smoothly and then tilts upwards, allowing the K5 to balance in a landscape orientation. Once you’ve opened the K5 up the screen also switches orientation, while the controls also switch – this is also where the second back button comes into play, although I’m still not convinced that it would have been hard to use just the one.

When it comes to sound quality, a tiny speaker like this is never going to fill a room up, or even give you full, thumping bass response. But what you do get is a very clear sound, that can be pumped up to pretty high volumes without too much distortion. I took the K5 with me to San Francisco recently so that I could listen to music while I was working and getting ready in the morning, and in that hotel room environment it performed very well. I was also able to test out arguably, the K5’s best feature – the alarm clock. Many MP3 players have an alarm feature, but I don’t want to go to sleep with headphones in my ears; the K5 on the other hand makes a viable alarm clock, waking you up with your own music played through its integrated speaker. 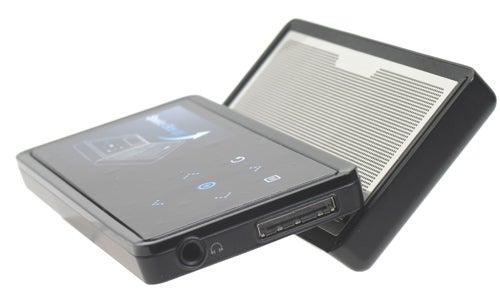 
So, the speaker gives a pretty good account of itself, but would that be a feature that you’d be willing to pay more for? Or more importantly, would you be willing to put up with a larger and heavier device for the odd occasion when you’d want to share your music with friends? You see the K5 is pretty large and heavy compared to its competition – looking at the image below you can see that the K5 looks massive compared to an iPod nano, while it still manages to dwarf the SanDisk Sansa. 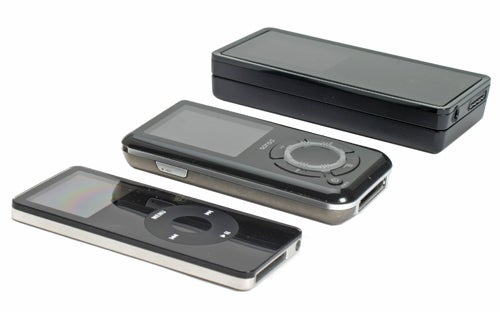 To be fair, without the speaker the K5 would be roughly the same size as the Sansa, but of course the speaker is the whole USP. And it’s not just size of course – while the nano is a featherweight 44g and the Sansa a quite negligible 74g, the K5 weighs in at a hefty 104g – although that’s a couple of grams lighter than Samsung states in its spec sheet. Actual dimensions are 98 x 48 x 18mm (LxWxD), which isn’t huge, but you’ll definitely feel it in your pocket, unlike a nano.

On the plus side, the battery life is considerably better than the original nano at 30 hours, although the new nano isn’t too far behind at 24 hours. That said, the 30 hours quote is based on listening to MP3s encoded at 128Kbit/sec, and anyone who encodes their music at anything less than 192Kbit/sec really should be ashamed of themselves. And if you want to listen through the speaker, you’re going to get about six hours play time. 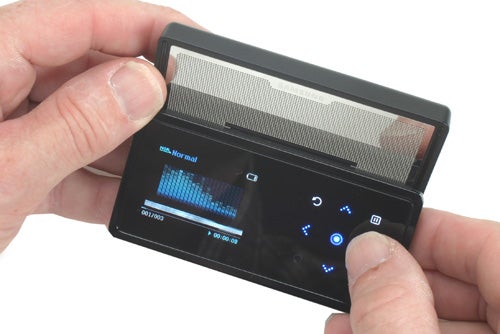 When it comes to price, the 1GB version that I’ve got here will set you back a substantial £92.83, especially when you consider that the 2GB iPod nano will cost you £99, with the 2GB Sansa costing around the same. Better value is the 4GB K5, which will set you back £150.96, although for an extra £20 you can pick up the 8GB nano, while an extra £9 will get you a 6GB Sansa. Obviously neither the Apple or SanDisk products have the built in speaker, but with these prices, you’ve really got to want that speaker.


And that’s the whole point with the K5, you’re really going to have to want an integrated speaker to be tempted. It’s not the price that puts me off, it’s the size and weight – to be honest, if I wanted an integrated speaker enough to consider the K5, I’m not sure I’d want to carry it around with me every day as my regular player. Ultimately, I can slip my nano into my pocket and not even feel that it’s there, and even my Sansa doesn’t make a big dent in my pocket, but with the K5, you know it’s there every minute that it’s in your pocket.

The K5 also lacks the slick navigation system of Apple’s baby, while the similarly equipped Sansa is also a breeze to use. Scrolling through a long list of artists or songs on the K5 is an arduous task, while on an iPod it’s simple and very, very quick. In fact the whole usability side of the K5 is a bit clumsy by comparison.


But if there’s one thing I’ve learned about Samsung over the past few years, it’s that this is a company that will work at something until it gets it right and starts producing superb, desirable products. So I’m in no doubt that Samsung will be a force to be reckoned with in the digital music arena. I have no doubt that one day Samsung will produce a player that is worthy of accolades and will challenge Apple at its own game. But I also have no doubt that the K5 isn’t that player. 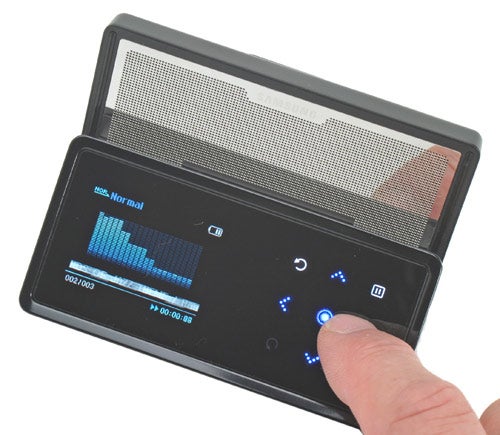 
Samsung has created a very innovative product with the YP-K5. I can’t deny that the design is clever and the integrated speaker produces sound of a higher quality than I expected. With the K5 Samsung has produced a player that has a feature that no other device on the market has. But ultimately you have to ask yourself whether you’re willing to accept a larger, heavier and more expensive MP3 player, just so you can listen to it through a speaker once in a while – for me, I’m afraid the answer is no.