After last week’s Asus UL50Vg, there’s now another option if you’re after a relatively thin and light laptop with a large screen and, potentially, excellent battery life. Indeed, Samsung’s 15.6in X520 has more or less the same specifications as the Asus, including Intel’s Consumer Ultra Low Voltage (CULV) processor. The main differences are that it doesn’t sport hybrid graphics or an overclocked CPU, and comes with Windows 7 Home Premium instead of Professional. Since it has a similar price point of around £600 and is also up against the Acer Aspire Timeline 5810T, now available for under £500, let’s see how it compares. 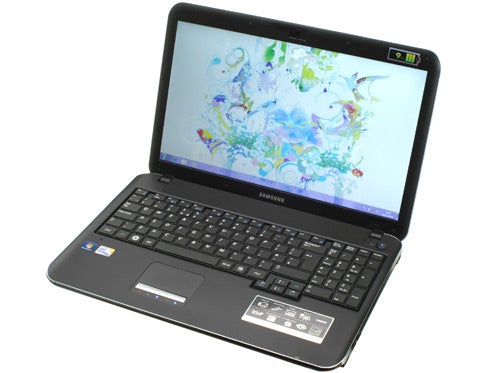 As the X520 is essentially a larger sibling of the (article:12209 Samsung X120), in terms of looks it’s an attractive machine. Unfortunately, the lid is as glossy as ever but its pearlescent silver sheen makes a nice change from the usual variations on piano black and doesn’t show off fingerprints to the same extent.


Lifting up X520’s display reveals a matt black interior – bravo Samsung as we’re not fans of glossy ones! The screen’s surround is slightly convex, fitting snugly into the partially concave base, the sides of which are accented by a faux-chrome strip. Build quality is generally good though the chassis does suffer from flex here and there. 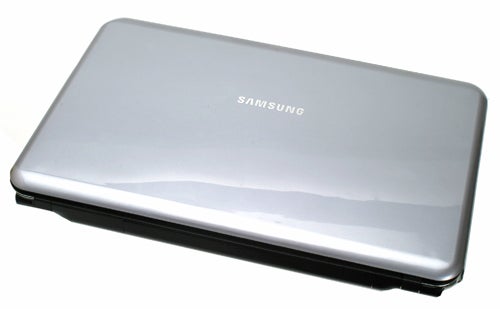 Samsung’s latest presents an extremely simple and minimal design overall, with a power button sporting a tiny blue LED – the only control aside from the keyboard and touchpad. All the other shortcuts and controls usually found on a separate strip are incorporated into the keyboard as secondary functions and are clearly laid out. We also appreciate the dual Fn keys, one of which handily resides just above the cursor keys that host brightness and volume controls. 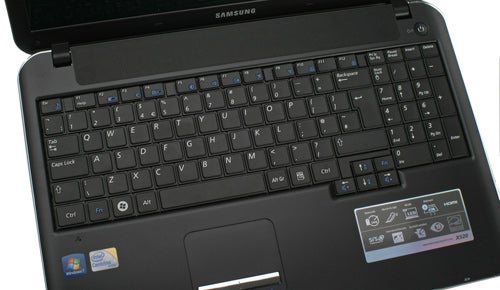 Unfortunately, the tile-style keyboard, which includes a full number pad, leaves us with mixed feelings. Layout is faultless, and the keys’ broad, smooth surface is pleasant to touch. However, while travel is good and keys give off an audible click when pressed, they also feel a tad loose. Combined with some flex and a noticeable rattle towards the keyboard’s edges, we’ve definitely come across better efforts.


Thankfully, the touchpad is just right. It’s set into the chassis so its edges are tangibly delineated, it’s sensitive, neither too small nor too large and offers the same smooth surface as its surroundings. As with most laptops that come with Windows 7 it offers multi-touch and it works flawlessly (unlike some). 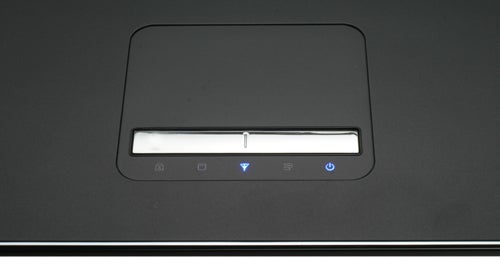 Despite displaying the usual fondness for fingerprints, the touchpad buttons (integrated into a single chromed rocker switch) do give excellent feedback. Below these are the laptop’s status indicators, which are backlit in blue or green. These will of course be hidden when the laptop is closed, so there’ll be no visual cues to remind that it’s still switched on as you pack it into your bag.

Connections on the X520 include an Ethernet port of the non-Gigabit variety, VGA and HDMI video outputs plus headphone and microphone jacks, all along the left edge. Unusually, all of its three USB ports are located on the right edge, next to the optical drive. At the front, is an SDHC and MMC memory card reader.

Beating at the heart of the X520 is an Intel CULV CPU, specifically the SU7300 running at 1.3GHz. Don’t let the low clock speed fool you; this processor is significantly faster than any of the Atom CPUs you’ll find in most netbooks and will let you run efficiently-encoded Full HD video without problems (as long as nothing is running in the background).


This is backed up by 4GB of DDR3 RAM, which is pretty much standard for higher-end laptops these days and more than the installed 32-bit Windows 7 knows what to do with. With most systems these days coming with 64-bit versions Samsung’s choice here may seem a little odd, but in terms of application compatibility a 32-bit OS does still offer a few advantages. 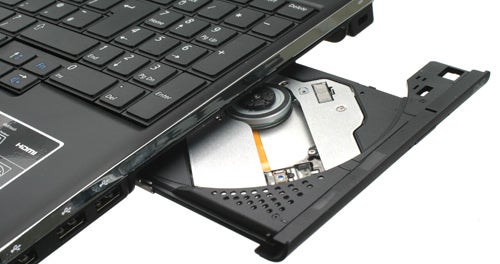 For storage, the 5,400rpm hard drive is very generous at 500GB, which is pretty much the most you can expect on a single-drive laptop these days. To round things off the X520 is equipped with Wi-Fi (IEEE 802.11n), the fastest wireless standard available, and Bluetooth 2.1 plus EDR.


Inevitably, graphics consist of Intel’s integrated GMA4500M HD solution, meaning great battery life but rubbish gaming and 3D performance. As an example, this chip gets you an unplayable average of 13.8fps in TrackMania Nations Forever at medium detail and the screen’s native 1,366 x 768 resolution. 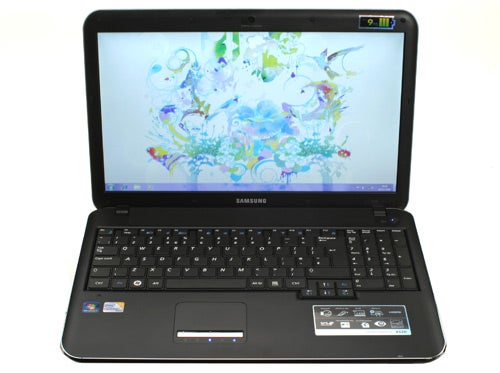 Speaking of the screen, despite the reflective coating we all love to hate, the X520’s 15.6in example is decent. As usual with anything but professional-grade laptop screens (like that found on the RGB-LED-backlit Dell Studio XPS), viewing angles suffer from severe contrast shift and greyscales lose distinction at both ends of the scale, meaning you may miss subtle dark and light detailing in photos, films and games.


However, aside from this there’s little reason for complaint. Banding is so minimal as to be unnoticeable and backlight bleed is absent altogether. Colours are reasonable and thanks to decent sharpness, even small fonts are readable without strain.


The X520’s 1.5W SRS-speakers, on the other hand, are only mediocre. Even at their relatively low maximum volume, distortion creeps in quickly, marring reproduction that’s already somewhat lacking in clarity. It must be said that turning on the SRS processing does improve things somewhat, especially where perceived bass and depth are concerned. Nonetheless, their performance is average at best, leaving us with yet another laptop where external speakers or headphones are recommended.

In terms of software, Samsung provides a few home-grown utilities, some of which (like Samsung Update Plus which automatically keeps your drivers up to date) are genuinely useful. You also get a nice-looking custom wallpaper.


Aside from its relatively light 2kg weight, what really distinguishes the X520 from ‘ordinary’ 15.6in laptops is its claim of a nine-hour battery life. Unfortunately, as is so often the case these claims are optimistic at best. That’s not to say that this laptop’s battery life is poor by any means, as six and a half hours in MobileMark’s semi-intensive Productivity test is an achievement that most large laptops can’t hope to better. However, it is in line with other CULV efforts and in fact matches the score returned by Asus’ UL50Vg to the minute. 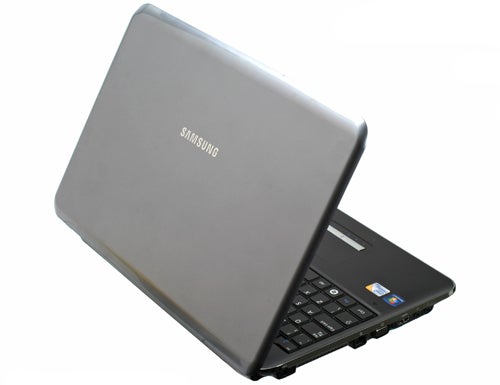 At full screen brightness, battery life is a little more disappointing, as in the DVD test the X520 managed ‘only’ three and a half hours. Still, as the screen is perfectly usable (indoors in a lit environment) at anything but its lowest brightness setting, you’re sure to get more out of it.


Samsung is known for generally producing good value products and the X520 is no exception, as £610 is fairly affordable for a dual-core CULV product with relatively high-end specifications. However, the competition in this sector of the mobile market is heating up and Acer’s Aspire Timeline 5810T is a strong contender. It offers a better keyboard, a metal lid instead of glossy plastic one, a slightly thinner chassis and superior sound processing. There’s also a larger choice of configurations and for just £50 more you can get the Aspire with discrete Mobility Radeon HD 4330 graphics as well. 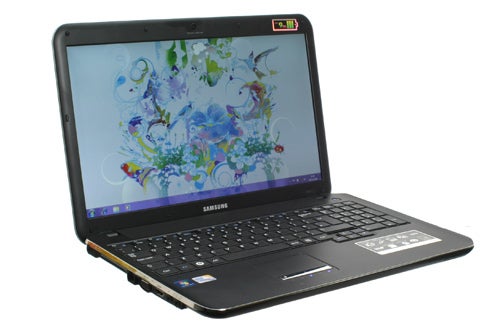 It’s also worth considering that for many, the combination of CULV with a large laptop like this isn’t the ideal partnership. If you’re after portability, a smaller 11 or 13in model (such as the award-winning Acer Aspire 1810TZ) will not only be easier to carry but will usually offer far longer battery life too. Whereas if you’re just after a decent medium-sized laptop, a machine sporting a more power hungry Core 2 processor will not only be cheaper, it may allow for extras like a Blu-ray drive for the same kind of money.


With the X520, Samsung has created a competent but never outstanding laptop and while it’s not a bad buy, at this size there are better options available.