It’s been several months since I last reviewed a Samsung camera, and in the intervening time the Korean electronics giant has completely revamped its entire range. I’m hoping to get quite a few of the new models in over the next few weeks, but for today I’ve got one of the most interesting of them, the WB500. Although it’s only the base model of the creative WB series, it has an impressive specification, featuring a 10.2MP sensor, a 2.7-inch LCD monitor, 720p HD video recording, limited manual exposure control and an industry first, a 10x zoom lens with a 24mm-equivalent wide-angle. 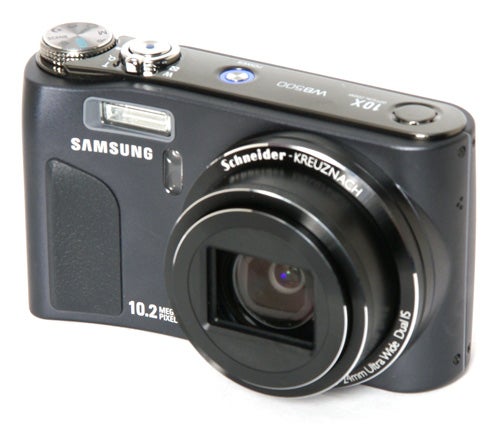 As I’ve remarked before, the long-zoom compact market is extremely competitive, and the WB500 will be going up against some very strong recent rivals, including the Canon SX200 IS, the Ricoh CX2, the Olympus mju 9000, and of course the benchmark for this class, the Panasonic TZ7. The WB500 offers a specification which bears comparison to any of these, but it only costs £170. That’s the advantage of being the world’s largest conglomerate company; when you make all of the components yourself, you can knock out some very advanced technology at ridiculously low prices. 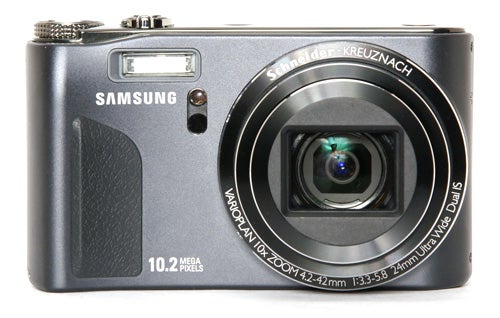 The WB500 makes a good impression straight out of the box. The body has a nice clean shape with an elegantly sculpted handgrip and rear thumbgrip, and feels substantial and solid in the hand. It’s quite chunky as compact cameras go, measuring 105 x 61.4 x 36.5mm, making it slightly larger than the TZ7 or the CX2 and a lot bigger than the mju 9000, although it is a little skinnier than the SX200. It has a strong all-aluminium body with superb build quality, although its solid construction, added to the weight of that big f/3.3-5.8 4.2-42mm Schneider-Kreuznach lens dominating the front do make the WB500 quite heavy. At approximately 240g including battery it’s the joint heaviest in its class, matching the Canon SX200.

The WB500 has a 2.7-inch monitor with a resolution of 230,000 dots. It has a nice fast refresh rate and is certainly sharp enough, and also has automatic brightness control. The screen cover, which appears to be scratch-resistant, cuts down on reflected glare and the picture is clearly visible even in bright sunlight. The monitor does have one niggling fault however; it has a nice wide angle of view in every direction except downwards, so if you hold the camera over your head, say to shoot over a crowd, you can’t see what you’re pointing it at. 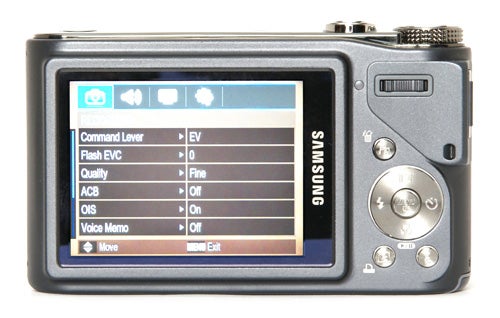 In common with Samsung’s other recent cameras, the WB500 features USB charging, with the battery charged inside the camera. This is very convenient if you travel with a laptop, since you only need to take one battery charger and the camera’s special USB cable. The camera does come with a mains charger, but it charges quite quickly while connected to a suitable USB socket.


The control layout is typical for this type of camera, with a fairly chunky mode dial on top, along with a rotary zoom control around the shutter button and the illuminated power button. The controls on the back are more unusual. On the thumb grip is a small and rather fiddly rocker switch which is used to adjust either exposure compensation in automatic mode, or the shutter speed and aperture in manual mode. The WB500 is one of the few cameras in this class to feature manual exposure, although in truth it is quite limited, with only a choice of minimum or maximum aperture and shutter speeds from 16 seconds to 1/1500th of a second, but any manual control is better than none at all. 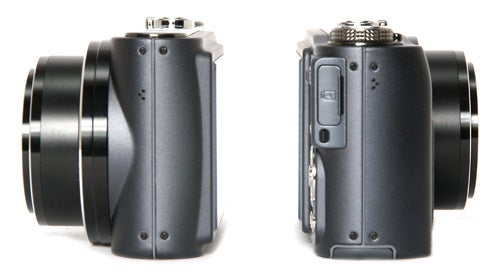 The other controls consist of three small buttons and a standard circular D-pad, all labelled in a nearly invisible metal-on-metal embossed style. The main menu is really only for basic settings, most of the shooting functions, such as metering and AF modes, ISO settings, white balance and drive mode, are controlled via a function menu activated by the “Fn” button, while the “E” button brings up another menu with a very wide range of picture controls, including contrast, saturation and sharpness, full three-channel manual colour control, and a useful range of pre-set photo effects. There aren’t many compact cameras that offer this degree of creative control. It’s just a pity that the actual physical controls are so poorly designed.

In terms of overall performance the WB500 acquits itself well. It starts up in approximately two and a half seconds, and in single shot mode it can take a picture every 1.9 seconds, which is pretty quick. There are two full resolution continuous shooting options, offering either 0.8fps or 1.7fps, which is also quite impressive. Samsung’s new DRIM image processing engine seems to have some serious grunt, which bodes well for the other models in the range. 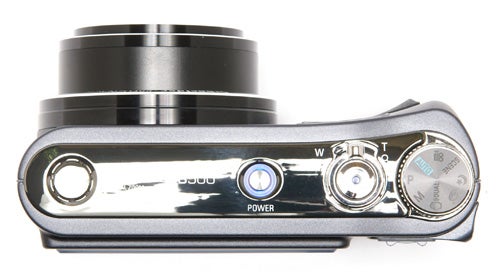 The WB500 has a very good video mode, shooting in 1280 x 720 resolution at 30fps, recording in the popular MPEG4 H.264 format. The zoom lens can be used while recording, but it does produce a loud whir which is audible on the mono soundtrack. Picture quality is good though, even when shooting in low light.


The autofocus system is particularly good, and especially its low light performance. The AF assist lamp isn’t that bright, but nonetheless the cameras will reliably focus in total darkness at a range of around four meters. The flash range lives up to its claimed 4.7m maximum range, and recharges fairly quickly in about six seconds from a full-power flash. However thanks to the position of the flashgun relative to the handgrip and shutter button it is all too easy to get your fingers in front of the flash, resulting in some odd shadows. 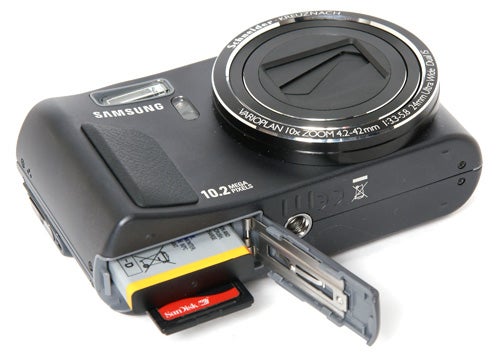 The make-or-break of a camera is of course image quality, something which has proven to be a weak spot for some previous Samsung cameras. There’s certainly nothing wrong with the lens, which produces virtually no wide-angle distortion and excellent edge-to-edge sharpness, although it does suffer from a little chromatic aberration in the corners of the frame. The new processing engine seems to have taken care of most other possible problems, and the overall image quality is very good. Dynamic range is somewhat limited, as is usually the case with small-sensor 10MP cameras. The Auto Contrast Balance does help to preserve shadow detail, although there is a tendency to burn out highlights and some very bright saturated colours lack detail. Noise control is very good, with little visible noise at 400 ISO and decent image quality even at 800, although at 1600 and 3200 ISO there is a lot of noise.

The new Samsung WB500 is an extremely impressive camera for the price. It looks good, has superb build quality, a huge list of features, and its performance measures up to cameras costing £100 more. It does have one or two foibles, but when it comes down to value for money it’s hard to beat.

”Over the next few pages we show a range of test shots. On this page the full size image at the minimum and maximum ISO settings have been reduced to let you see the full image, and a series of full resolution crops have taken from original images at a range of ISO settings to show the overall image quality. These pictures were taken indoors in a shaded area. ” 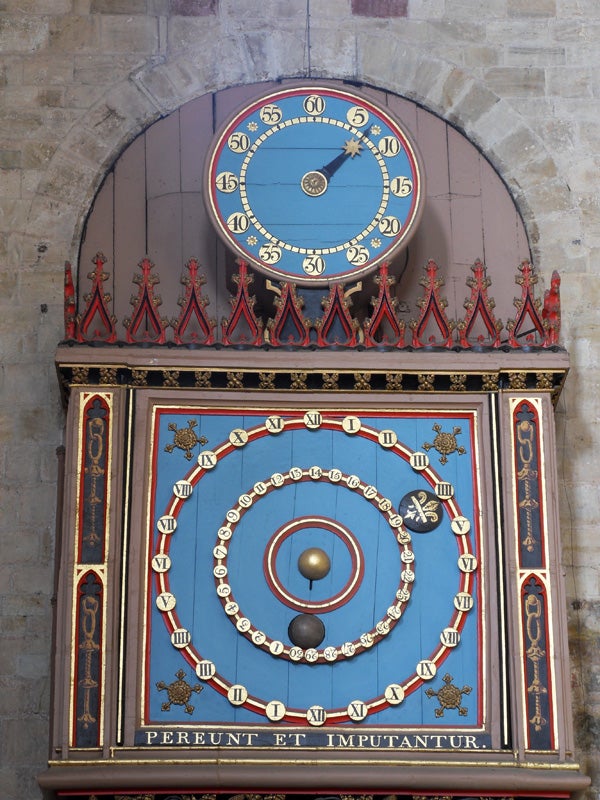 This is the full frame at 80 ISO. It’s the 15th century astronomical clock in Exeter Cathedral. 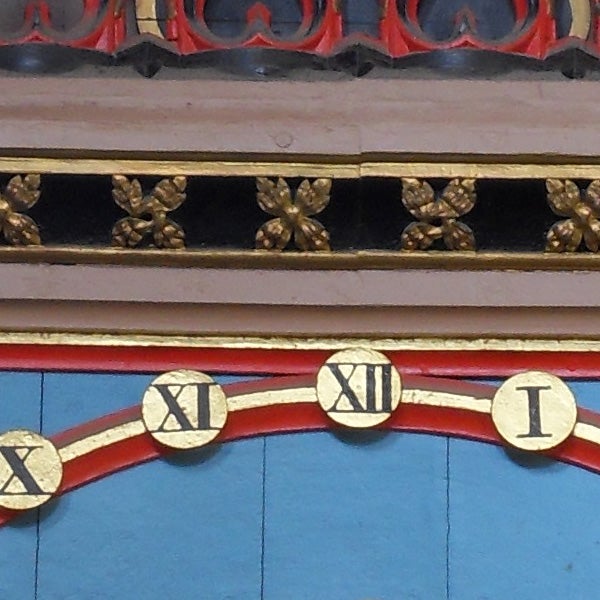 No noise and pin-sharp detail at 80 ISO. 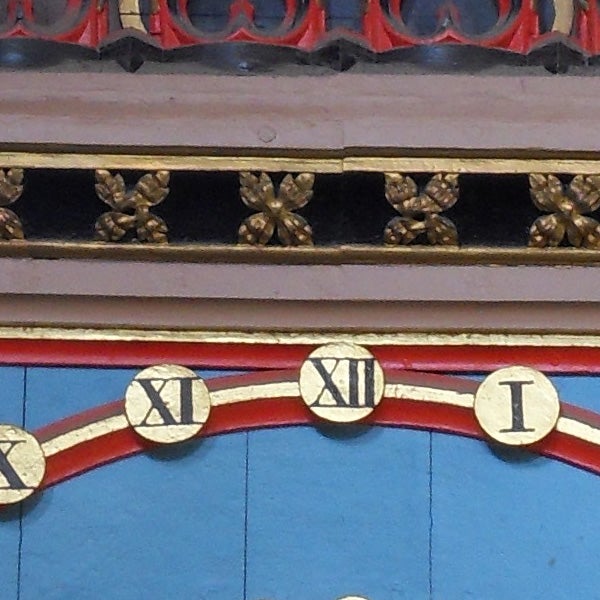 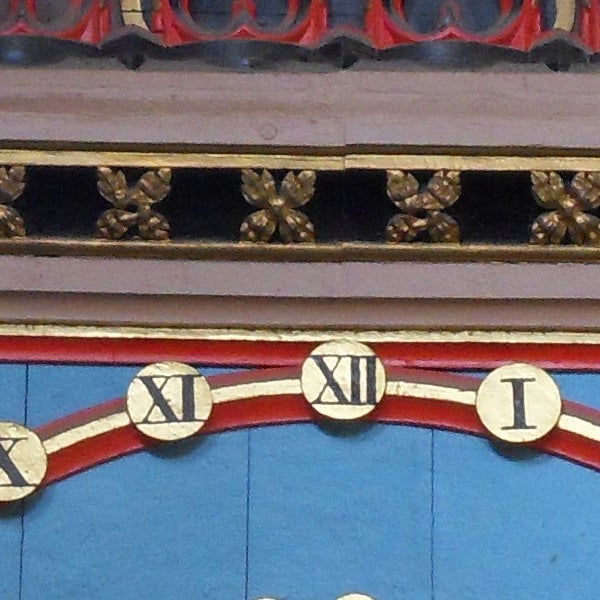 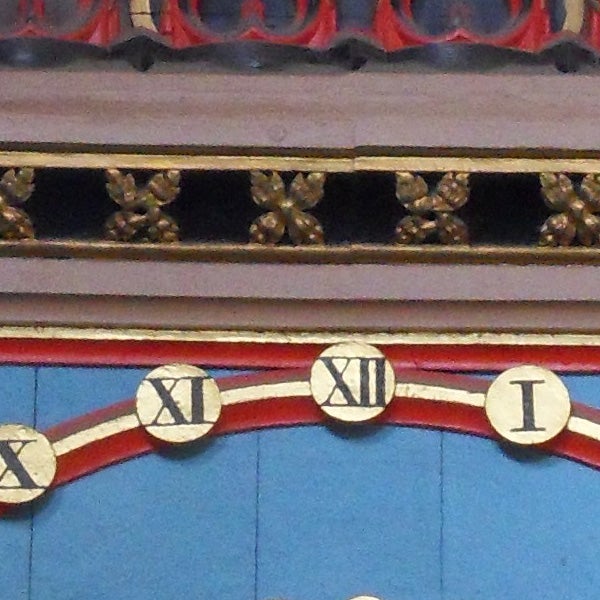 There is a hint of noise at 400 ISO, but overall quality is still very good. 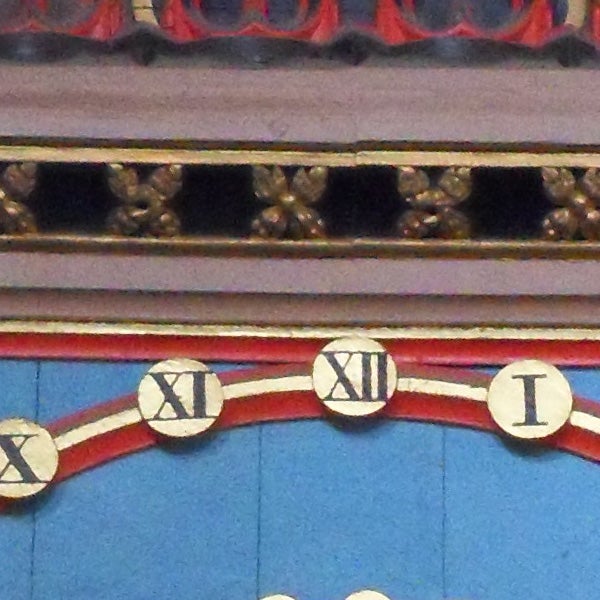 More noise at 800 ISO, but colour and contrast remain good, and the picture is quite printable. 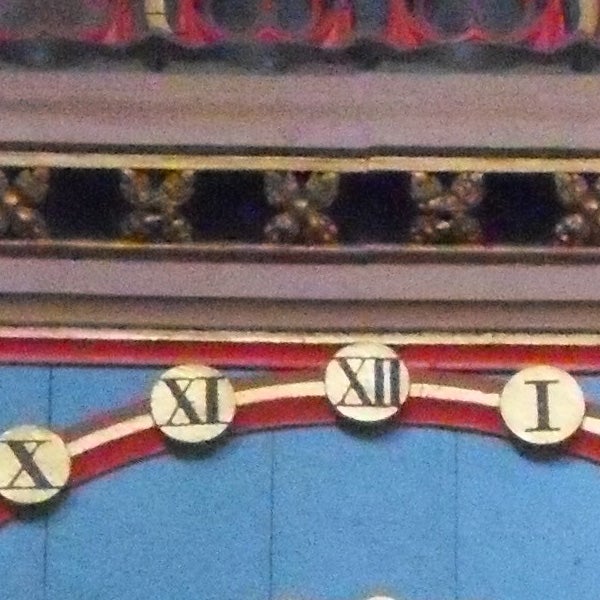 Much more noise at 1600 ISO, with loss of detail and faded contrast. 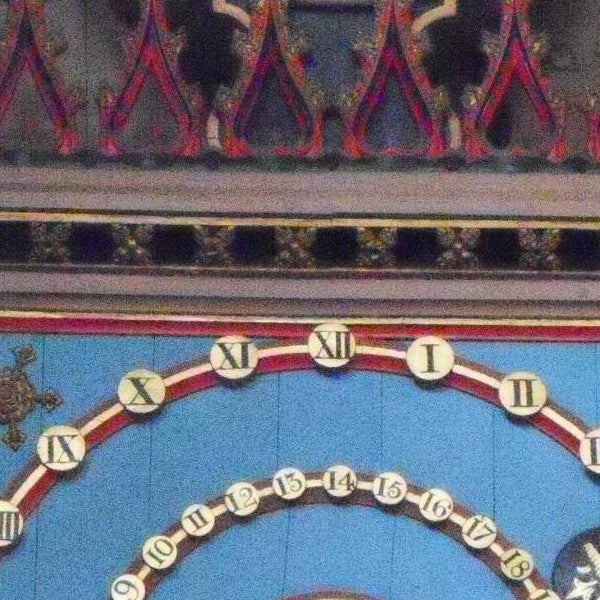 3200 ISO is available at 3MP, but the quality is not brilliant. 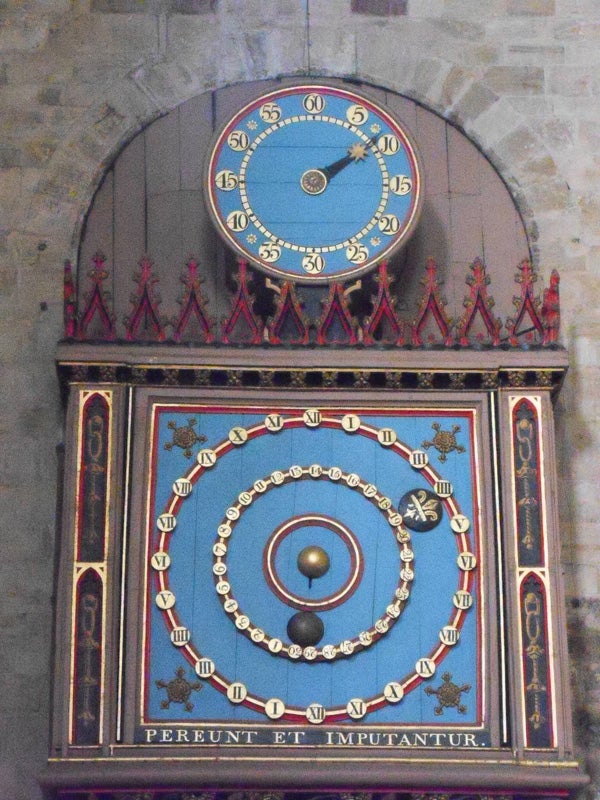 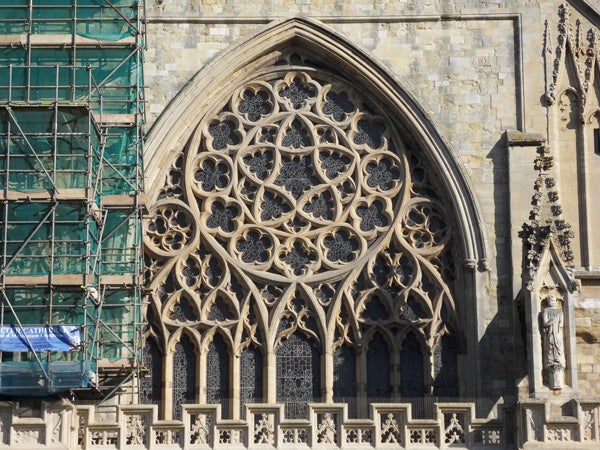 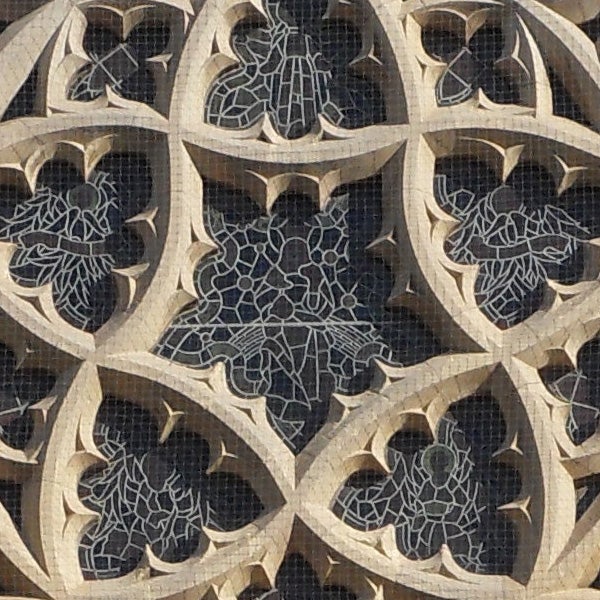 The 10MP sensor and high quality lens produce a lot of fine detail. Please note this was shot on Fine quality, not Super Fine, although to be honest there’s not a lot of difference. 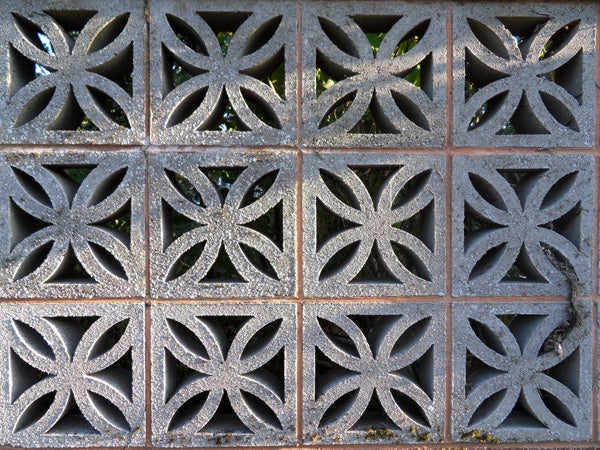 Despite its 24mm wide angle the Schneider-Kreuznach lens produces virtually no distortion. 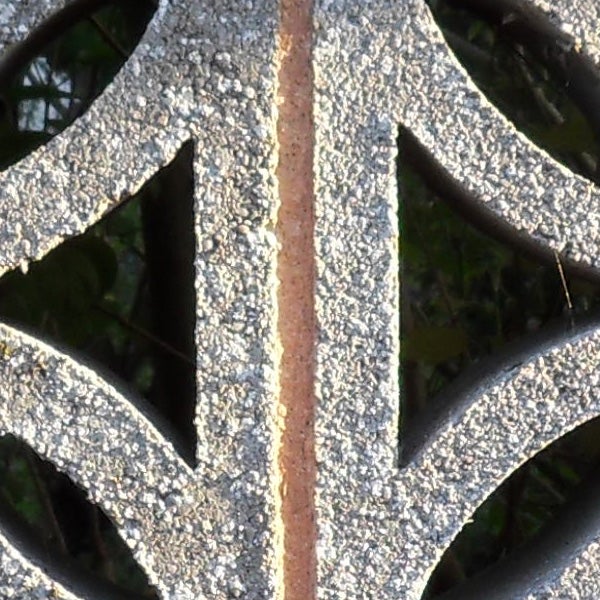 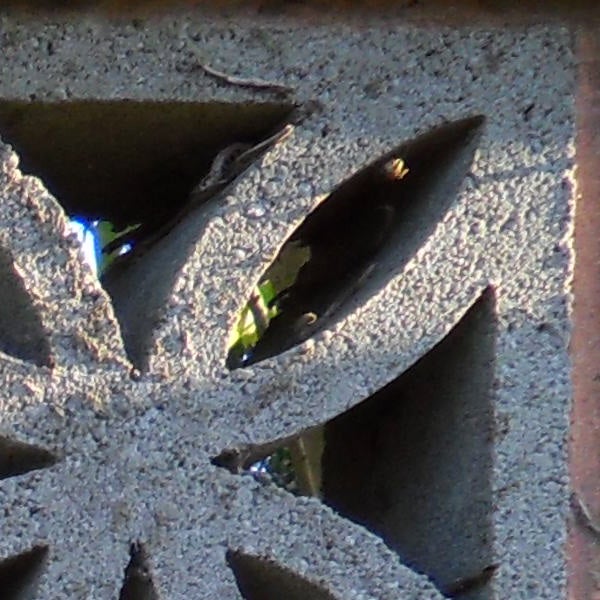 Edge sharpness is also very good, with only a bare hint of chromatic aberration. 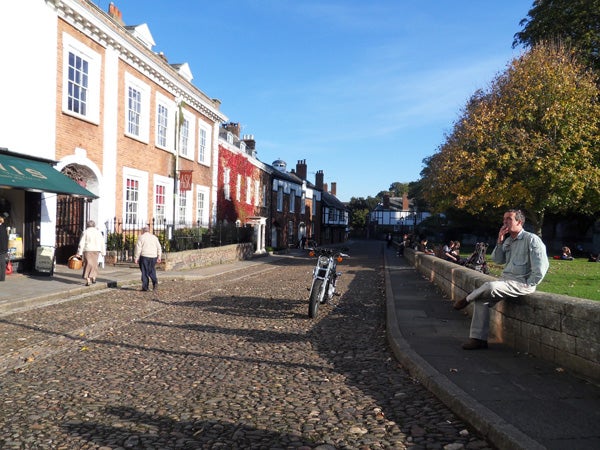 The 24mm wide angle really swallows the scene whole. This is shot from exactly the same viewpoint as most of my wide-angle shots, for easy comparison. 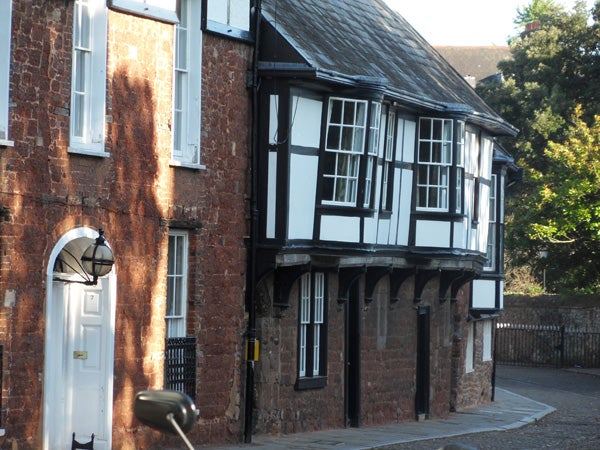 The 240mm telephoto end is good for pulling in distant detail. 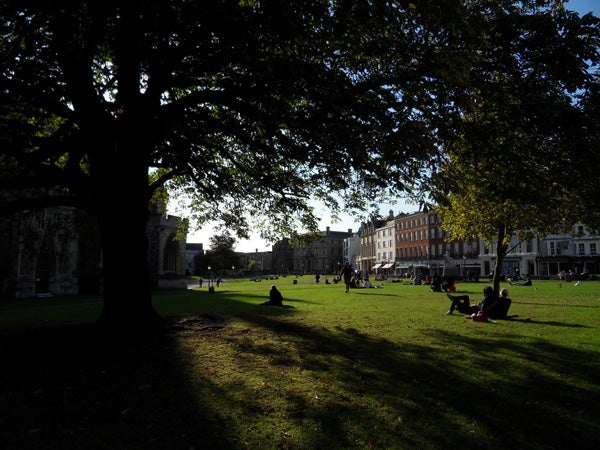 Without the ACB feature dynamic range is rather limited. 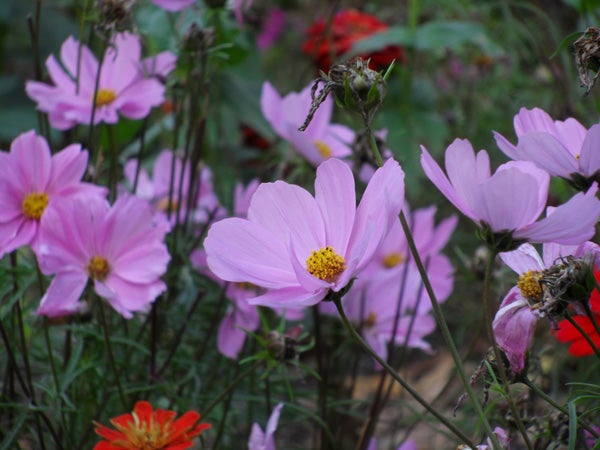 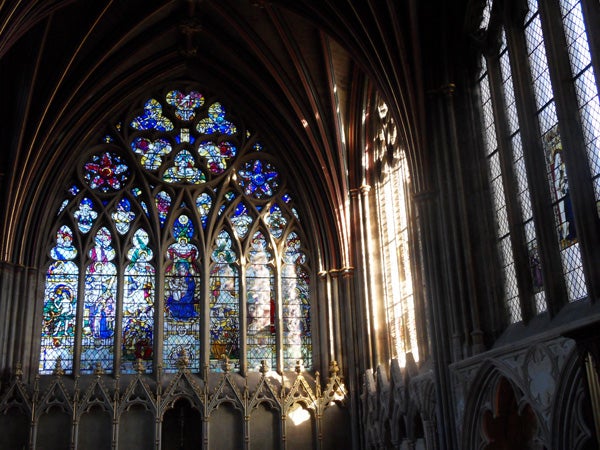