Samsung’s best-known smartphones are Android devices like the Samsung Galaxy S, but in the background it has quietly been working away on its own Bada-powered phones. Bada is an OS made by Samsung, for Samsung phones, and the Wave 723 is just the third device using the OS to hit the market. Is Sammy simply too proud to admit defeat or is the Samsung Wave 723 worthy to stand up against rival budget smartphones? 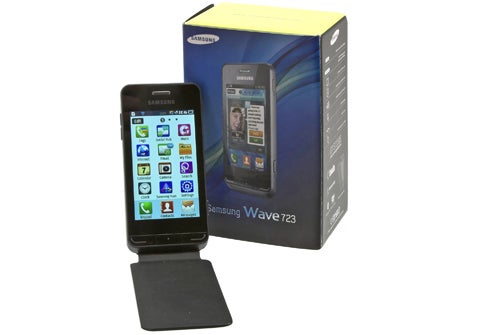 The original Samsung Wave represented a striking start for the Bada platform. Metal-bodied, Super AMOLED-screened and powered by the same Hummingbird processor as the Samsung Galaxy S, it wasn’t the ultra-accessible budget device some expected to launch alongside Samsung’s own smartphone OS. The Samsung Wave 723 is what results when all the fineries of this first Bada phone are stripped away.


Gone is the ultra-bright WVGA display, replaced by a non-AMOLED 240 x 400 pixel model, the camera retains the 5-megapixel sensor but can’t match the Wave S8500’s image quality, and the metallic finish has been scaled down to a mere metal backplate atop a plastic body. Family resemblance aside, these phones are intended for different buyers – the Samsung Wave 723 has its eye on the budget contract or pre-pay customer.


To mask these cut-price origins Samsung has tried to class-up the phone with an unusual bundled accessory, the leather flip case. An optional addition, this case covers the Samsung Wave 723’s screen with a leather-clad flexible plate that’s fastened into an alternate cover for the bottom of the phone’s back. An odd USP, but a USP nevertheless.

Although it gives the Wave 723’s display the added protection we used to see in not-much-missed flip phones, it mostly fails to reproduce that cigars-and-mahogany sensibility of class it seems to point towards – the styling of the rest of the body isn’t up to the task. And what’s wrong with a simple screen protector anyway?


The phone’s body misguidedly uses four different hues of black and grey. Samsung’s staple shiny black for the front, silver for the phone’s sides, a darker silver for the bottom part of the backplate and a still-darker brushed metal for the metal battery cover. This patchwork of shades leaves the poor Samsung Wave 723 looking as if much less care and attention was put into its design than some of Samsung’s other phones, often highly regarded for their looks. 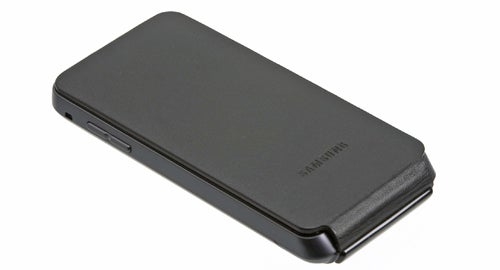 The metal backplate doesn’t entirely remove the slightly cheap feel of the plastic-bodied phone, either, which is far removed from the dense and compact body of the original Samsung Wave. Before you accuse us of harking back to unfair comparisons, consider that now, almost a year on from the Wave S8500’s release, both phones are available for free on the same low-end contracts from some carriers.

As few are familiar with Bada’s small family line, we’re going to dwell a little on what the OS has to offer. Bada has its own app store, comes with a GPS navigation app and gives multiple home screens to customise with widgets. As the Samsung Wave 723 offers Wi-Fi and 3G, it’s an always-connected device that fulfils all of the usual smartphone prerequisites. 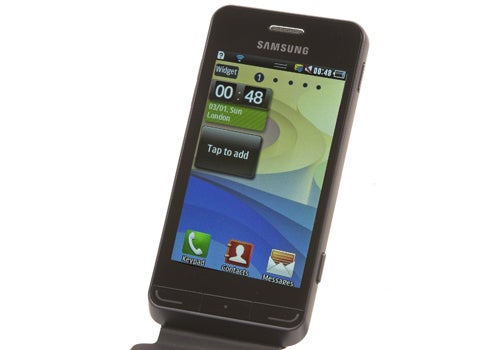 A sense that the Bada Wave 723 still has one toe resting in feature phone territory remains though. Bada is designed with accessibility in mind, and customising your home screens is quick and easy. Just tap the “Widget” button at the top-left of a home screen and drag the widget you want from the toy chest that pops up at the bottom. However, it’s as limited as it is simple.


The selection of built-in widgets is fairly small, and although you can download more from within the Samsung Wave 723’s Settings menu, there’s not a great deal extra on offer. With our test device, we had access to a whole 16 options including such riveting additions as a static shortcut to the Samsung Apps store. 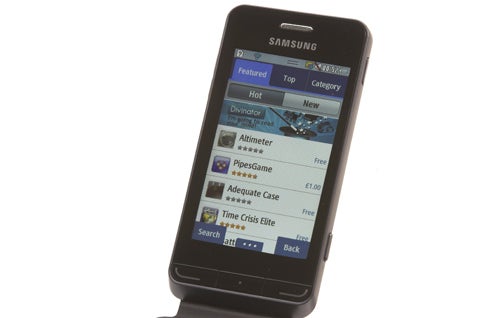 The Samsung Apps portal is similarly understocked, with fewer than 2,000 apps available at the time of writing. Many of these are low-quality java ports rather than the iPhone ports we’re used to in other smartphones ─ the navigation of it even smacks of an old Java games portal rather than a smartphone store like the Android Market or BlackBerry App World.


Experienced smartphone users might start to feel as though they’re playing in a quasi-smart sandpit, treated to an impression of the full smartphone experience rather than the real deal. The navigation of Bada comes across like an impersonation of Android in particular, but crucially it’s not a bad one. If you think you’ll find the boundless scope for customisation of Android daunting or of no interest, Bada’s not a bad alternative.


Bada’s issue is that it apes this most tweakable of smartphone giants, rather than adopting a slicker constrained style, as used in Apple’s iOS and Microsoft’s Windows Phone 7, and the inevitable comparison highlight’s Bada’s key weaknesses. Surprisingly, Bada offers full multitasking control though. Hold down the main menu key and a pop-up showing all running applications appears, each represented by an icon sporting a little minus sign that lets you close it down. 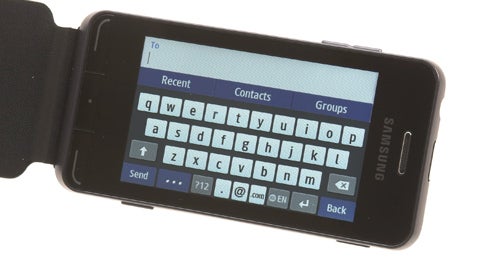 Multitasking can have an effect on battery life if you don’t keep an eye on your running apps. The Wave 723 will last for a couple of days with careful use, but we saw the battery level drop more rapidly when we left our multitasking ways unchecked.

The Samsung Wave 723 uses a 240 x 400 pixel, 3.2in display. Viewing angles are excellent, with no contrast shift, but the pixel count leaves text and icons looking blocky. Next to the 320 x 480 pixel display of the HTC Legend, which also uses a 3.2in unit, the Wave 723’s screen looks unrefined and dated in an age where the iPhone 4 packs in more than six times the number of pixels in an only slightly larger display.


It’s getting a little late to keep claiming that these cut-price features are entirely necessary at the price point too, when the Orange San Francisco retails for around the same price but uses a higher-fidelity 480 x 800 pixel display. 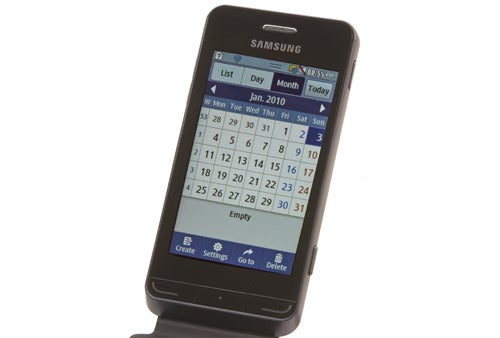 Thankfully Samsung hasn’t let the touchscreen of the Wave 723 date in the same way. It uses a finger-friendly capacitive layer rather than the resistive kind, still used in some budget smartphones.


The screen is responsive, but is let down a little by the phone’s software. The built-in keyboard doesn’t make best use of the limited screen space on offer in the Wave 723, which becomes an issue when typing in portrait mode. Although we’re used to typing away on sub-3.5in touchscreens, we were left trotting-out more typos than normal owing to the un-optimised layout of this most crucial of touchscreen elements. Switch to landscape mode and these problems melt away, though. 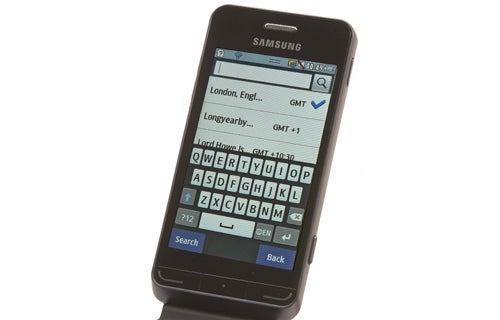 The touchscreen is multitouch capable, and the built-in browser uses the intuitive pinch-to-zoom method for zooming in and out of pages. Text rescales very quickly when flicking around web pages, and tabbed browsing plus a full bookmarking system are included. The UI of the bundled browser isn’t all that attractive but the Wave 723’s web-browsing skills aren’t far off those of the top smartphone platforms.

One of the original Samsung Wave’s top features was its ability to play almost any kind of video file you could throw its way. The Wave 723 doesn’t offer these same abilities. DivX and Xvid are out, leaving you with just the basic MP4, H.263 and H.264 spread of video types. The phone failed most of our media tests, with video files failing to show up at all in the built-in video player app.

Music codec support is also basic, but this should be less of a problem unless you’re a fan of lossless tracks or are still holding onto your old OGG collection like a misty-eyed vinyl fanatic. The built-in media player is neat and simple, and playback can be controlled using the home screen pull-down notification bar when you’re not in the music app proper.


The lacking media support is one area where the Samsung Apps store’s limited app selection comes into play. Using another smartphone platform, you’d be able to download an app to add further codec support, or at least try a different player, but there are no alternatives currently available on Samsung Apps.


The camera app powering the Wave 723’s 5-megapixel snapper is equipped with 13 scene modes, a continuous shooting mode, panorama, macro and exposure compensation. It’ll focus on subjects around 10cm away or further, and there’s an increasingly-rare physical shutter button on the phone’s side. 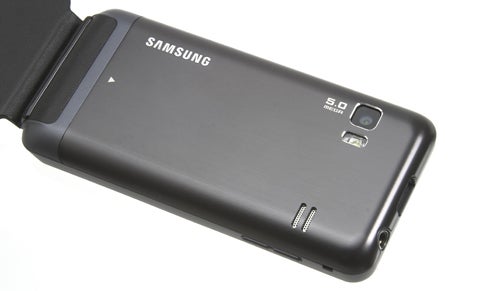 Although the camera’s pleasant to use, the resulting photos are unspectacular. In anything less than perfect lighting, images are grainy and there’s plenty of purple fringing on-show. Performance is better than most Android phones available for around the same price though, and the autofocus is relatively quick and easy to use.


A bare-bones smartphone, the Samsung Wave 723’s biggest problem is a question of timing. It’s available for free on cheap contracts, but so are plenty of arguably more attractive budget Androids like the HTC Wildfire and Orange San Francisco, while the original and far superior Samsung Wave isn’t lagging far behind price-wise either. 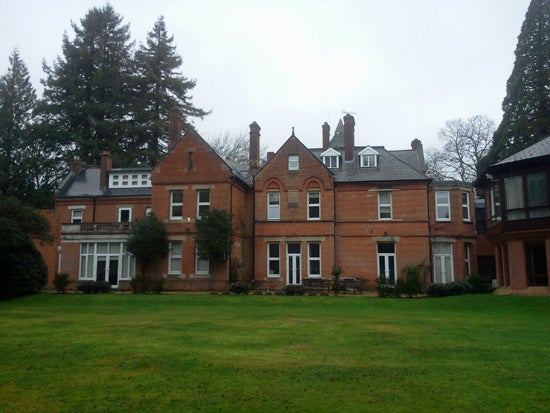 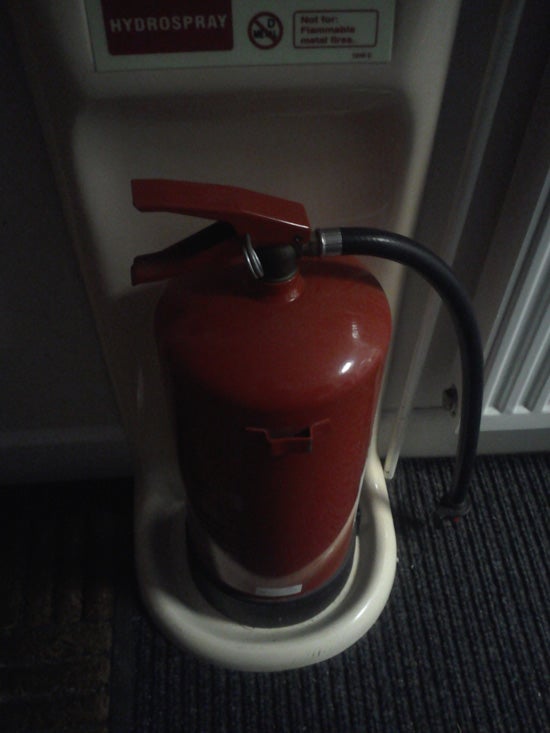 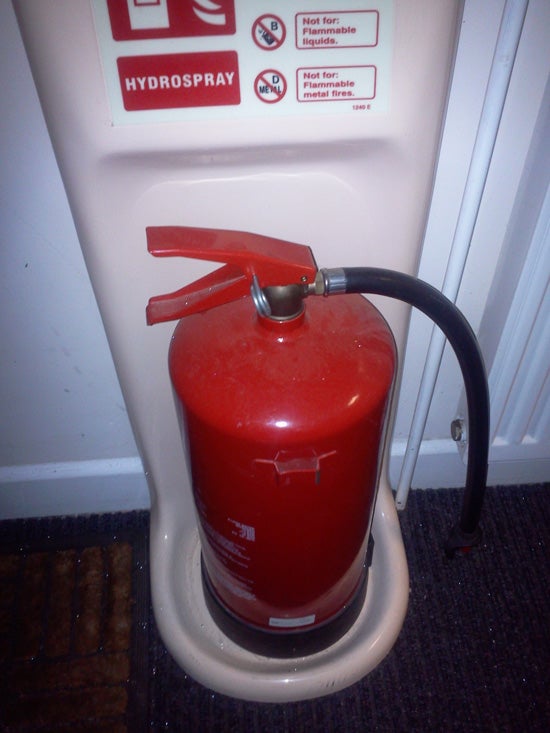 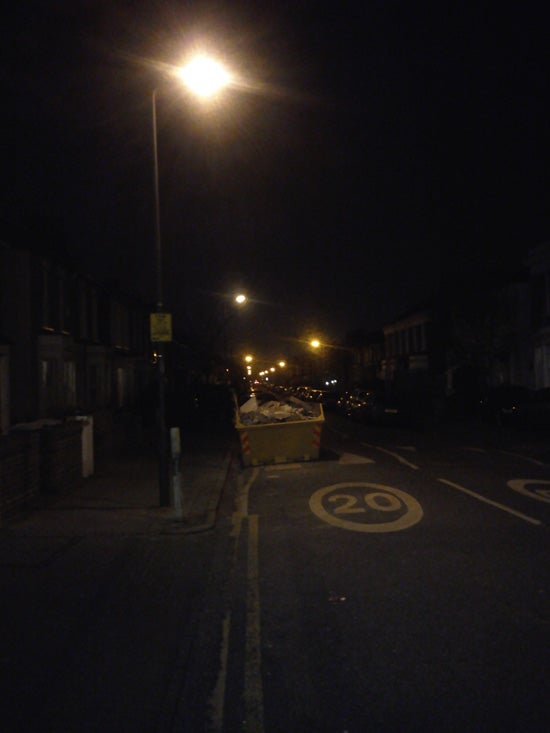