Going up against an established streamer like the Sonos Play:3 is no mean feat, but to its credit Samsung has matched it on the features front, and bettered it in places.

Multiroom streaming is obviously the star attraction, allowing you to pipe songs to multiple M7s around the home. You can send different songs or sources to individual speakers, or send the same song to them all (up to 16 speakers are supported if your router can handle it, claims Samsung).

With five M7s you can even create a multichannel home cinema setup and beam sound to them from a Samsung TV with SoundConnect. At £329 per speaker, it’s not the most cost-effective route into home cinema, but a possibility nonetheless. You can also use two speakers as a stereo pair, assigning the left and right channels within the app. 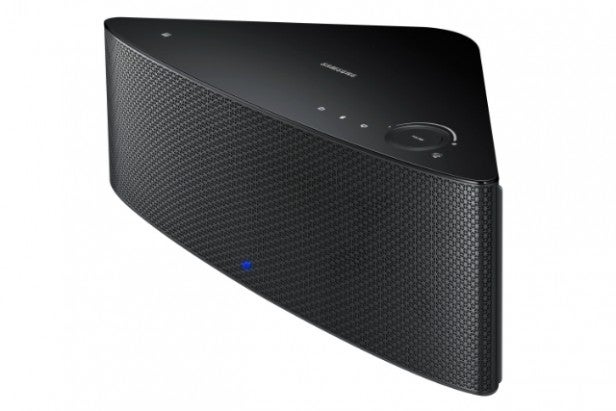 Music can be streamed from PCs, NAS drives, phones and other devices on your home network. Format support is excellent over a network, playing WAV, MP3, WMA, AAC, OGG, ALAC, AIFF and FLAC. It even plays hi-res FLAC files up to 96kHz/24-bit in full resolution.

You can also access music from a range of streaming services, which at the time of writing includes TuneIn radio, Amazon Cloud Player, Napster, Deezer and Spotify. That pales in comparison to the 17 services currently available through Sonos, but Samsung will add new services over time.

So far, so Sonos. But Samsung goes one better by adding Bluetooth with NFC for mobile devices without network capability. That’s useful when mates pop round and want to subject you to a new track they think you’ll love. Sadly you can’t pass Bluetooth audio to other rooms due to the different protocols involved.

As for the speakers, the M7 uses two 56mm midrange drivers, two 19mm tweeters and a 4-inch woofer.

We were impressed by how easy the M7 is to install. After connecting the Hub to the mains and router (via LAN cable) the speakers locked on quickly without any prompting or button pushing. If it doesn’t, use the Speaker Add button on the unit. A solid blue light on the front of each speaker confirms the connection. Direct hook-up to a router is cumbersome, particularly if it doesn’t support WPS, so we recommend investing in the Hub.

The system is controlled using the attractive, intuitive Samsung Multiroom App, a free download for Android or iOS devices. We used a Samsung Galaxy Note II and it worked beautifully.

The My Music menu (below) makes it easy to find songs – across the top is a row of buttons, including My Phone, TuneIn, Services, Music and Devices. Select My Phone and it displays all the music stored on the phone itself, listed alphabetically by song, album or folder. You can search for songs too. 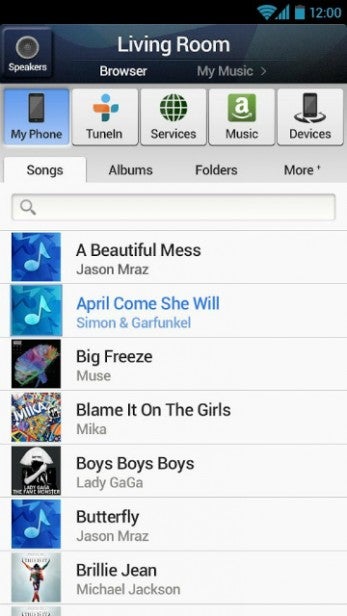 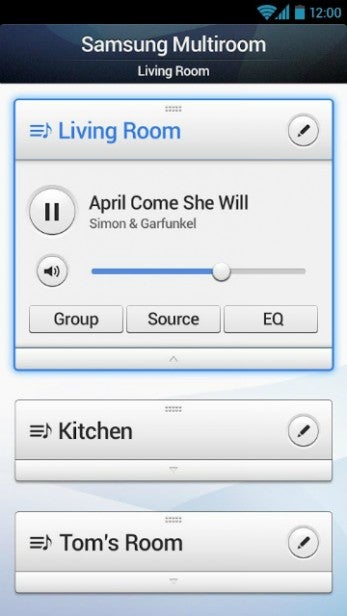 The Devices menu is where you can browse other phones, laptops and NAS drives on the network, while Services is your gateway to Spotify, Deezer and the like. None of the streaming services had been activated at the time of writing but we’re hoping they use a consistent menu design, rather than whisking you to a different-looking screen each time.

Amazon Cloud Player gets its own ‘Music’ tab, while the TuneIn section lets you stream internet radio. Your favourite presets can be toggled using the button on the unit.

To access multiroom features, hit the Speakers button at the top of the screen. Each connected speaker is displayed in its own box containing the name of the song currently playing, the volume level and three buttons – Group, Source, and EQ (see above).
If you want the same music to be sent to multiple speakers, hit Group and tick the boxes next to the relevant speakers (or ‘Select All’). The Source button brings up a list of places to stream from – Wi-Fi, Bluetooth or TV Sound – while EQ lets you adjust the bass, treble and balance.

You can easily rename each speaker (Bedroom, Living Room etc) and you can drag the boxes up and down to change the order. 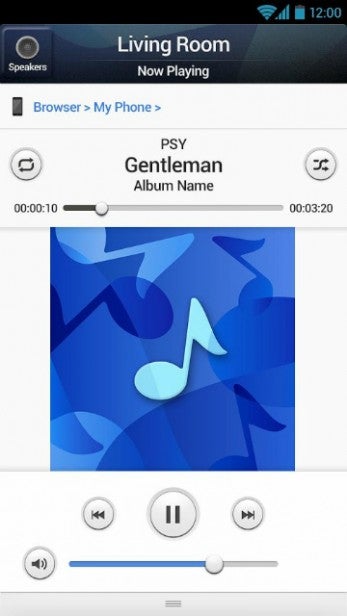 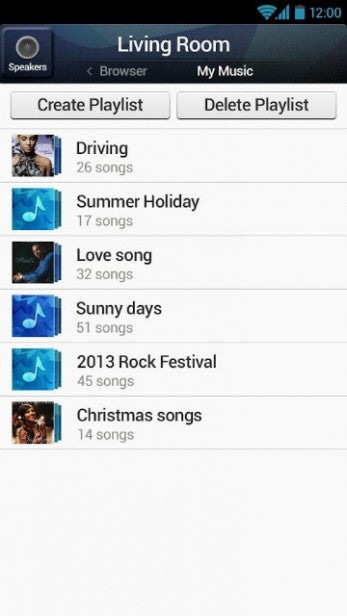 When two speakers are grouped, a stereo option appears. Select it and you can use the L/R switches to choose which one plays the left channel and which one the right (Sonos’ system requires a trip to the settings menu to do this).

Elsewhere the app boasts some lovely user-friendly touches, such as the ability to drag and drop tunes onto a particular speaker or into a playlist. Hold your finger down on a song and speaker/playlist menus slide in from both sides of the screen.

Just one quirk to report – you can’t reorganise songs within the multiroom app. An album we’d copied onto the Samsung phone was listed in the wrong order, possibly due to dodgy metadata, but it would only play them in that order. The only way to rearrange them was to create a playlist.