Samsung has changed the image of its camcorder range considerably over the last year, culminating in the excellent VP-HMX20. Stylistically, the VP-MX20 has a lot in common with its bigger brother. But where the HMX20 is a heavy-hitting HD model, the MX20 is a much more budget-oriented affair. Sporting the now almost obligatory YouTube sticker on its side and a sub-£200 price, this is a camcorder for the masses, rather than a premium shooter for the discerning video maker. 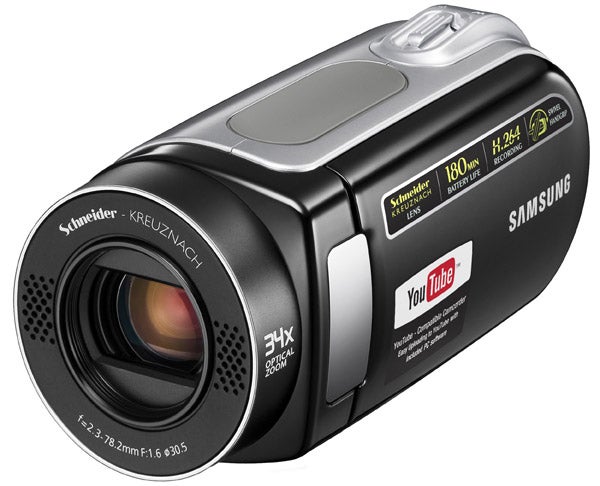 After the HMX20, the MX20’s specification seems pedestrian. Instead of a large, high resolution CMOS sensor, a small 1/6in CCD one with 800,000 pixels plays the central role. The tiny sensor means the MX20 can offer a massive 34x optical zoom, but it doesn’t bode well for image quality. On the plus side, Samsung is boasting optics from Schneider Kreuznach, a company with nearly a century of experience in the lens business. The lens is protected by a shutter mechanism, but it doesn’t open automatically. Instead, a slider on the side of the lens operates this manually.

Most standard definition camcorders from mainstream names use the MPEG-2 format for recording, but the MX20 instead relies on MPEG-4 H.264 AVC, packaged as MP4 files, the same as the HMX20. Four quality modes are available. TV Super Fine, TV Fine and TV Normal use a 720 x 576 resolution, whilst Web & Mobile operates at 640 x 480, which will be more directly compatible with YouTube. Data rates vary from over 7Mbits/sec in the top TV mode, to around 4.5Mbits/sec for the lowest. The Web & Mobile mode operates at 3.5Mbits/sec. All four options run at 25 frames per second, with 50 interlaced fields. The MX20 records to SD or SDHC, so a 4GB card is enough for 1.5 hours of footage in TV Super Fine mode, and nearly 4 hours in Web & Mobile.

The MX20 is primarily controlled by a jog dial and selection button on the edge of the LCD, with a menu button providing access to more settings. The only discrete buttons are for toggling Easy Q mode and cycling through the C.Nite low light modes. The jog dial is a little fiddly, but it gives rapid access to some useful functions by pressing the central button. Manual exposure is available, with 30 steps. The shutter can be adjusted from 1/50th to 1/10,000th, independently of exposure. The dial is also used for manual focusing, and curiously you can turn off sound recording. Without pressing the central button, the dial offers another method for controlling the zoom.

Pressing the menu button calls up more manual options, alongside further ways to access the settings already mentioned. Aside from manual or automatic focusing, the MX20 also has Samsung’s version of Face Detection in this section, although it’s not entirely clear what this is doing when enabled, if anything. White balance presets include Daylight and Cloudy for natural light, or Fluorescent and Tungsten for artificial illumination. The Back light compensation mode can be found buried here, which renders it a little too inaccessible. The menu is also the home of the iSCENE preset modes, which include Sports, Portrait, Spotlight, Beach, and Snow, plus a couple of more quirky options, including High Speed, Food, and Waterfall.

A potentially fun option is Interval recording, which creates time-lapse effects by capturing a single frame after a fixed period. You can set how frequently each frame is captured, and how long you want recording to be performed. The intervals can be from 1 to 30 seconds, and recording duration from 24 to 72 hours, or ‘infinite’, which effectively means until the memory card is full. So if you fancy recording clouds move or grass grow, this could be the camcorder to do it. Although the MX20 has a three-hour quoted battery life, you will be better off enabling the time lapse function with the AC adapter plugged in. There is a readout in minutes of how long the battery has left, which is very useful. 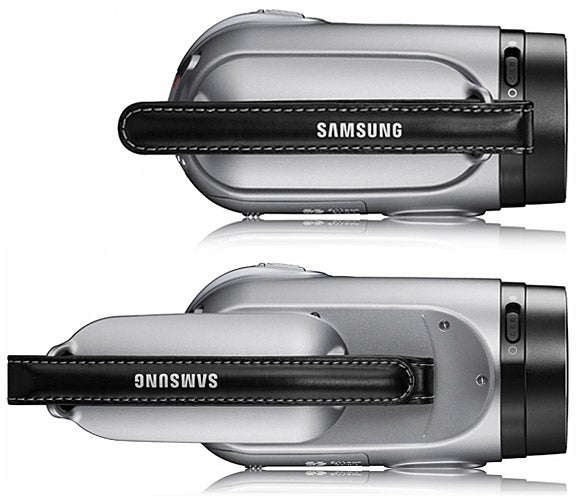 This is a comfortable camcorder to use, too. Although the form factor is essentially the same as the HMX20, the MX20 is lighter and the handgrip swivels, so it’s easy to operate with one or two hands. However, despite the presence of manual controls, there are few other concessions to the serious video maker. No accessory shoe is incorporated for attaching third-party peripherals, no microphone input, and no headphone jack for monitoring audio levels.

With its pedestrian 1/6in sensor, the MX20 was never going to offer quality even vaguely close to the HMX20. It lived up to our lack of expectations, producing performance more reminiscent of Samsung camcorders of yore. On the plus side, the footage is sharper than similarly specified models from competitors, such as JVC’s Everio GZ-MG330. But compression artefacts are also more noticeable, and colours darker. The results will be more than good enough for YouTube, though.


In moderate artificial illumination, quality is merely average for a camcorder in this class. Footage is fairly dark, filled with coarse grain and compression artefacts. This worsens as the light diminishes. But the MX20 does get the white balancing mostly correct, which is a refreshing change from most budget camcorders. The C.Nite low light modes also boost brightness, but at the expense of grain. The most aggressive of the two produces seething swathes of noise, and both introduce an unsightly posterising effect. The auto focus is also very unsure of itself in poor lighting. Audio isn’t brilliant either. This is recorded at 24kHz, rather than the 32kHz or 48kHz used by most camcorders. 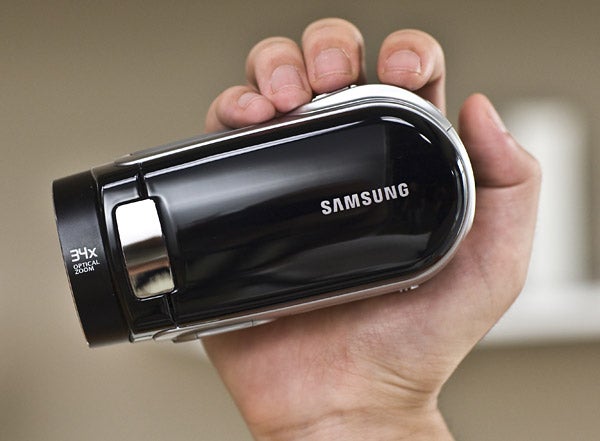 CyberLink MediaShow is bundled on CD for uploading your videos to YouTube, which worked well. But we also tried the MP4 files in Adobe Premiere Elements 7, Corel VideoStudio Pro X2, Pinnacle Studio 12 Plus and CyberLink PowerDirector 7. None of them had any trouble importing or editing the files. If you just want to watch footage on a TV, an AV minijack is incorporated with a breakout cable for composite video and stereo RCA audio.


The Samsung VP-MX20 is not a huge revelation like the VP-HMX20. Targeting the video-sharing mainstream, its specification raises fewer eyebrows, and its video performance is towards the lower end of the market. Note also that the MX20 has no still photo mode at all, so can’t stand in for a digital camera. But then there’s the price. With most competitors costing over £200, this camcorder represents great value, even if it doesn’t have the image quality or features required for the video-making enthusiast.