Samsung camcorders used to be somewhat ‘cheap and cheerful’. But in the last couple of years a transformation has occurred. In fact, simply picking up the VP-HMX20 reveals how far the company has come. The build is solid, the design bold and purposeful. It’s clear that Samsung means to make up for lost time, and the HMX20 has plenty of surprises in store.


The first bombshell is just how big the sensor is. It’s a 1/1.8in CMOS – the largest in any consumer camcorder currently available. This sports a similarly chart-topping 6.4-megapixels, which may not benefit video but will pay dividends for digital photography. Still images can be shot at up to 3,264 x 2,448 pixels, with a built-in flash that pops up when needed. We found it very effective in everyday domestic settings. If you fancy shooting some photos of your family alongside the video, the HMX20 will be more than up to the job.


Discrete buttons have been kept to the bare minimum, with virtually all controls operating via the touchscreen TFT. This is highly reminiscent of Sony’s camcorder touchscreen system, which is not a bad thing as that’s very capable. All manual settings are configured through this TFT, and Samsung has made the key options readily accessible. Hit the Quick Menu button on the TFT, and six icons appear providing immediate access to Storage (for choosing between the 8GB internal memory or additional SDHC card), Resolution, White Balance, Focus, Exposure and Shutter. 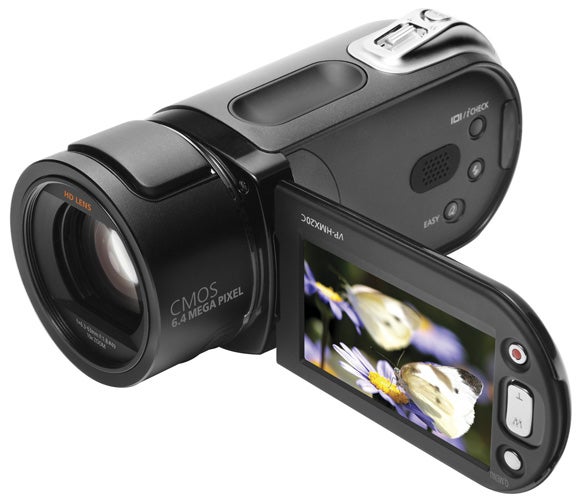 There are five resolutions on offer. The HMX20 can shoot 1,920 x 1,080 Full HD with 25 progressive frames or 50 interlaced fields per second. You can also choose 576/50p and Slow Motion. The latter records 10 seconds of footage using a curious 448 x 336 resolution, but at 250 frames per second. The output is then played back at 50 frames per second for extremely smooth slo-mo.


There are also three quality modes to choose from – Super Fine, Fine and Normal – which operate independently of the resolution options. Super Fine equates to about 15Mbits/sec with HD, and 9Mbits/sec with 576/50p. The 8GB internal memory is therefore enough for 71 minutes of footage in one of the HD modes at Super Fine quality mode, or four hours of standard definition at the Normal quality mode.

The manual exposure setting offers plenty of fine control with 30 increments available. However, there is no direct iris configuration option. Although you can also set the shutter manually to values ranging from 1/25th to 1/10,000th, you can’t use this at the same time as Exposure. Manually setting the latter greys out the Shutter option.


Manual focusing owes more than a passing resemblance to Sony’s camcorders, with a choice between touching the point in the frame you want in focus, or changing the focal distance up or down. The Samsung will focus as close as 20cm, too, which is handy if you like nature videography. White balance presets include Daylight, Cloudy, Fluorescent and Tungsten, or you can use fully automatic or manual modes.

Delving further into the menu reveals yet more options. There are five Scene Modes – Night, Sports, Portrait, Spotlight and Beach/Snow. The Super C.Nite mode has Normal and Super settings, which reduce the shutter speed by varying amounts at the expense of jerky motion.


However, although the range of settings available is competitive, the physical features are more limited. No accessory shoe is integrated, although there is a microphone minijack on the rear, and you can’t monitor sound levels, as no connection is provided for headphones. On the plus side, the battery readout also estimates time remaining in minutes, so you know exactly how long you’ve got left.


Overall, the build is reassuringly solid, the buttons in the right place for immediate finger action, and the touchscreen a doddle to use. But we didn’t find the HMX20 comfortable to operate single-handed. It’s easier to use with your second hand on the edge of the LCD – which has become the standard shooting posture anyway.

With its massive CMOS sensor, we had high hopes for the VP-HMX20’s video performance, and it didn’t disappoint. In optimal lighting, visual quality is nothing short of stunning. Colours are accurate, rather than the usual over-saturation found in most consumer camcorders, although this is a matter of preference. Detail levels are very high, too. There is still more grain than the best HD camcorders currently available, but it’s not oppressive and overall Samsung has stepped up its game by a quantum leap.


The results are similarly impressive in low light. Under everyday artificial illumination, image quality is still very good, retaining plenty of colour. Thanks to the huge, high-resolution CMOS, detail levels remain high despite increased noise. Since the camcorder can shoot 25p progressive video, you can use the shutter control to drop down to 1/25th without ill effects. This has a significant benefit for image quality, bringing colours back close to their appearance in the best conditions and reducing grain considerably.

The benefits of a 1/25th shutter speed are even more pronounced in the worst lighting. Although the Samsung still manages fair colour differentiation in 50i mode, the image is dark and very grainy. But switching to 25p and a 1/25th shutter makes a marked improvement to both factors, allowing the HMX20 to shoot usable video. On a more disappointing note, we found the progressive mode produced more jerky motion than with other manufacturers’ camcorders, particularly Canon’s. So whilst it really pays dividends in low light, we would recommend sticking with 50i in better illumination.


Lurking under a sliding flap beneath the LCD is a USB port and a proprietary port for AV or component analogue video output, depending on which of the supplied cables you plug in. One slight disappointment is that the HMX20 doesn’t record AVCHD, even if its H.264-based MP4 compression is virtually the same. So its footage will not be so widely compatible with software. However, we tried sample files shot using each of its formats in Adobe Premiere Elements 7, Corel VideoStudio Pro X2, Pinnacle Studio Plus 12 and CyberLink PowerDirector 7. None of them had any problems importing or editing the footage. Samsung also supplies a suite of CyberLink apps in the box, although this only includes version 6 of PowerDirector.


The VP-HMX20 marks a sea change for Samsung. Whereas the majority of its previous models were firmly aimed at buyers on a budget, this one has image quality and features to vie with the best from the big household names in the camcorder business. Yet it’s still very reasonably priced. In fact, at under £500 the VP-HMX20 is one of the cheapest models in its class. So it’s a real contender on every level.