There’s no doubt that one of the biggest ‘buzzes’ at this year’s CES was Ultra HD: the name now being given to screens that carry ‘4k’ resolutions (3,840 x 2,160 pixels), delivering four times as many pixels as current full HD models. And, not surprisingly, Samsung had one of the most striking Ultra HD propositions at the show: the 85in UE85S9000.

Although you might think the UE85S9000 big enough to make the Ultra HD point, remarkably it was actually joined on Samsung’s CES stand by a gargantuan 110in ultra-HD model, but as this will likely require the budget of a small country to afford, we’re focussing on the 85in here.

The first thing you notice about the UE85S9000 – apart from its sheer screen size – is its genuinely remarkable ‘Timeless Gallery’ Design. This really is unlike any TV design we’ve seen before, and finds the huge screen suspended within an extremely robust looking external frame that forms part of an easel-like arrangement whereby two deck-chair style legs at the bottom allow the screen to stand on your floor.

Given the huge pressures placed on such large screens by typical mounting designs, this side-mounted suspension idea from Samsung is potentially as clever as it is striking. Though you can wall mount the TV within its frame too, if you prefer (as shown in one of our accompanying images). 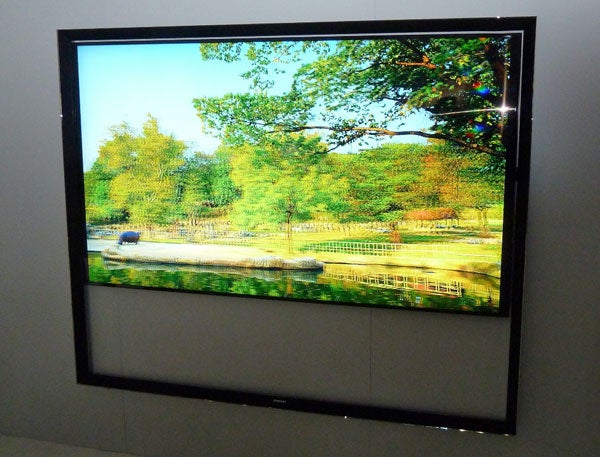 The stand isn’t just there to hold the TV up and look cool, either. Its top edge contains a camera for use with Skype, while its sides contain a remarkably powerful 120W speaker system, complete with two woofers firing down from the bottom. From the time we spent with the UE85S9000 at the show, we’d say that this system is good enough to deliver a soundstage able to do the scale of the TV’s pictures justice.

It’s worth stressing here that the UE85S9000 is very much a TV, not a mere display. Which means it’s got a tuner, and all of Samsung’s latest Smart TV functionality.

To demo the UE85S9000, Samsung was running a combination of native 4k in 2D based around the usual specially shot pretty locations, as well as some 3D content. We didn’t spot any demo screens running upscaled HD images, but Samsung assures us that it’s developed its own specialised upscaling algorithms for its new Ultra HD TVs. 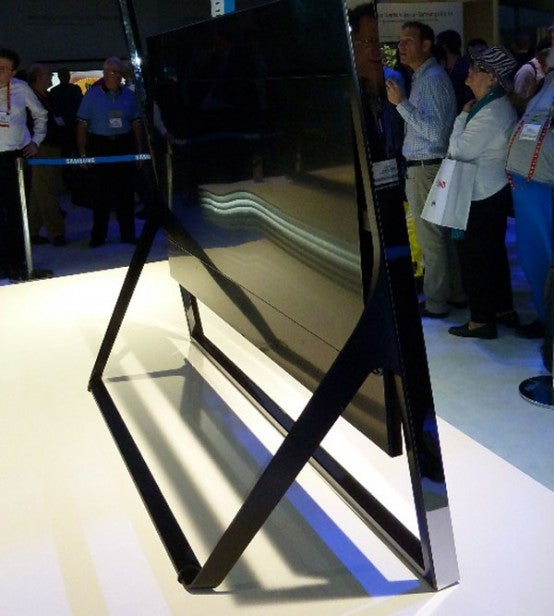 Both the 3D and 2D content shown looked totally spectacular on this massive S9000 LED TV. The clarity with which the 4k details in the image are rendered is enough to make your head spin, immediately letting you realise that you’re looking at a blissful example of the future of TV. The way you can’t see any sign of individual pixel structure in the image – even on a screen as big as 85in – is pretty incredible, making it much easier to feel immersed in the 4k images.

Colours are rendered with immaculate blends too thanks to the density of the pixels, and images also seem to have a much greater sense of depth than you get with any standard full HD screen, thanks to the way the UE85S9000 can deliver more detailing right off into the horizon.

Colours on this Samsung S9 UHD TV are also extremely punchy – maybe even a touch too much so in whatever presets Samsung was using. However, we expect that the UE85S9000 will carry some pretty sophisticated colour management tools with which to sort this issue out.

The Samsung S9 also delivered a hugely satisfying combination of contrast and brightness, with what appeared to be a fairly even backlight (bearing in mind that we’re trying to judge this based on predominantly bright content under the far-from-ideal lighting conditions of a show floor), the only issue we could find with either the 2D or 3D pictures was that a little of the exceptional 4k clarity is lost when there’s fast motion in the frame.

Alas, Samsung wouldn’t be drawn on a price for the UE85S9000, despite the fact that it’s due to launch in America within the next six months. But with its combination of a bold and unique design, huge screen, and truly next-generation pictures, we’re willing to bet it will attract plenty of fans no matter how much it costs.