You might be surprised to know that we don’t automatically think bigger is better in the TV world. It often is, especially if you’re a home cinema fan, but if a TV doesn’t have the picture performance to go with its prodigious dimensions then all those dimensions do is draw extra attention to the picture’s weaknesses.

Fortunately, the UE85HU7500’s epic dimensions expose precious few weaknesses in its pictures. On the contrary, in most ways its enormity provides the strongest testament yet to Samsung’s UHD abilities.

Unable to resist the urge to see how native UHD content looks at 85 inches across, we immediately fed it our usual supply of native UHD demo sequences, movie trailers and, thanks to its integrated HEVC decoders, Netflix UHD streams. And once we’d got the TV set up as described earlier, we couldn’t get enough of what we were seeing. 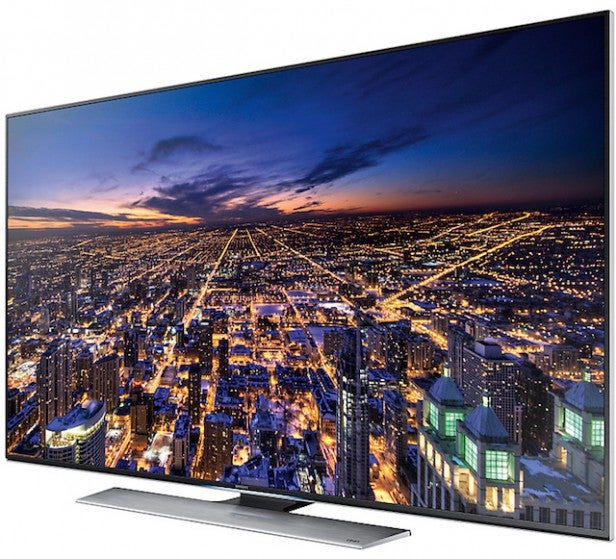 For starters, while we don’t abide by the school of thought that believes UHD is only worthwhile on vast screens like this, UHD delivers more impact the larger your screen gets. And when that size is joined by images as strong as those of the UE85HU7500 the results are truly mouthwatering.

Samsung’s new UHD monster does a particularly phenomenal job of bringing out the extra detail and clarity you’d expect from a picture format that contains four times as many pixels of image data as HD. Also gorgeous to behold on such a large screen is the way the density of the UE85HU7500’s pixels lets you forget you’re watching a TV picture, as there’s no trace of the jagged edges or visible line/pixel structure that you’d see at this sort of screen size with a normal full HD resolution.

We’ve said before how UHD makes you feel like you’re looking through a window rather than watching a TV, and this impression is beautifully underlined by the pristine enormity of the UE85HU7500’s pictures. Except that here the reality you feel you’re watching is actually larger than life, giving you a truly cinematic experience.

Other key picture benefits associated with native UHD playback are also enhanced by the UE85HU7500’s vastness. For instance, shots with a lot of depth to them enjoy an even greater sense of scale than usual as the finer 4K/UHD detail enables the screen’s effective draw distance to go that much further into the distance before pictures soften out into flatness.

Also, colours look mesmerisingly refined and natural as the density and smallness of the pixels in the image enables the reproduction of colour tones of almost infinite blend subtlety. This is especially noticeable with notoriously tricky to handle colour areas like skin tones and subtle shading in dark areas.

Making sure the UE85HU7500’s UHD clarity remains largely intact during action scenes, meanwhile, is some crisp, judder-free motion handling so long as you follow the suggestions in the set up section. This is a particularly important achievement when you’re dealing with a source as pristine as UHD, where anything that reduces the sense of detail and sharpness would stand out like a sore thumb.

Also providing outstanding support to the UHD resolution is the UE85HU7500’s contrast. Unfortunately 2014 will be remembered as a disappointing year for TVs generally because of the amount of low-contrast IPS-style panels in the market place. But the UE85HU7500 employs one of Samsung’s much more contrast-rich VA panels with mostly lovely results – at least, again, if you follow the guidance we gave in the set up section. (If you don’t you may feel black levels are a little grey, and that there’s some backlight clouding in the image’s corners during dark scenes.)

Calibrated well, the UE85HU7500’s images deliver exceptional contrast levels by LCD standards, as rich, deep blacks share the frame with surprisingly vibrant colours and punchy whites – especially if you employ the dynamic contrast system on its medium setting. Something you can do, happily, without making the image look unstable and flickery.

In other words, even though you have to reduce the image’s brightness a little more than you might ideally like to combat the out-of-the-box backlight clouding, the UE85HU7500’s native contrast performance is so good that images still enjoy impressive punch and natural blacks.

The UE85HU7500’s UHD images can look a little noisy in their out of the box state thanks to Samsung’s tendency to leave things a little artificially sharpened, but this is easily fixed via the sharpness setting.

While the UE85HU7500 is overall a stellar demo machine for the boundless joys of native UHD content, its story is more complex when it comes to watching upscaled content. For just as its enormity emphasises the quality of UHD, it also emphasises the gap between UHD and HD.

Feeding in our regular test HD Blu-rays there’s a grainier, ‘fizzier’ look to images than you feel aware of on smaller UHD screens, as well as markedly less detail and more motion blur, especially over areas of finely detailed motion like the blowing weeds in the sand dunes at the start of the final Harry Potter film.

Colours look noticeably less nuanced too, leading us to tone their saturations down a little versus the bolder look we preferred with native UHD.

None of these issues, it must be said, is down to Samsung’s actually very impressive UHD upscaling somehow getting worse since we tested it on the brand’s smaller UHD screens. While there is evidence to suggest that the UE85HU7500 isn’t using precisely the same panel technology as other HU7500 TVs, the issues are predominantly just a result of the UE85HU7500’s gargantuan screen ruthlessly revealing precisely how hard it is to pick just the right colour and luminance for all those millions of extra pixels UHD upscaling has to deliver – especially given the difficulties in discerning between real picture information and unwanted noise in a source. But it’s still an issue we need to make you aware of given the current shortage of native UHD sources.

Not surprisingly the UE85HU7500 struggles even more with upscaling standard definition pictures, resulting in pictures that look painfully soft versus native UHD. To be fair, colours look less compromised than they usually do with standard definition upscaled to UHD, but we’d politely suggest that if you’re thinking of spending £8000 on an 85-inch TV then you should do everything you can to keep standard definition viewing to an absolute minimum.

Used as the main TV for the review period
Tested for more than a week
Tested using industry calibrated tools, discs and with real world use
Tested with broadcast content (HD/SD), video streams and demo discs
Previous
Samsung UE85HU7500 Review Next
3D, Sound and Verdict Review