While the unfeasibly large Samsung S9 TVs with their spectacular designs and ultra HD resolutions may have stolen the headlines at the CES, it’s Samsung’s F8000 series that are far more likely to find their way into our living rooms. For despite only representing the flagship level of Samsung’s new Full HD LCD TV range, they’re still going to be miles more affordable than the Ultra HD (UHD or 4K) ones.

To get an idea about what we can expect from this new more mainstream range, we settled ourselves down in front of the 60in UE60F8000 (we were tempted by the 75in F8000, but ultimately decided to stick with something more affordable!). And while it might not be as ‘out there’ aesthetically as Samsung’s ultra HD model, it’s still a seriously striking bit of kit.

For starters, its bezel is just a quarter of an inch wide. It’s also exceptionally thin round the back, even by today’s routinely super-slim standards, and is supported on a seriously sleek half-moon shaped ‘arc’ stand. A pop-up camera to aid is remarkably small and cute, too. Basically, it looks every inch the flagship.

In spec terms, the UE60F8000 is a standard Full HD resolution – we have to point that out these days! – illuminated by edge LED lighting. It also supports a much more developed system for controlling and sharing content via secondary Android and iOS devices. Then there’s Samsung’s latest Smart TV system, complete with a seriously gorgeous redesigned interface and what Samsung likes to call ‘the most personalised TV viewing experience ever created’: the S-Recommendation system.

In some ways this is similar to the my Home Screen system introduced in our first look at the Pansonic P60ZT60. After all, it lets different users set up their own menu pages for streamlined access to the sort of content they prefer. But as you might imply from the S-Recommendation name, it goes further, analysing your viewing history in conjunction with the popularity and release dates of TV programmes to create your own individual shortcut portal to exactly the sort of on-air, on-demand and app content you prefer. Like some kind of turbocharged TiVo system. 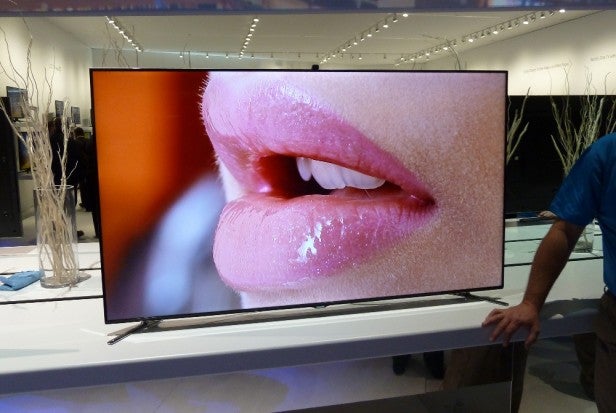 Of course, we’ll need to use this system over a prolonged amount of time to really appreciate its virtues (or otherwise), but in principal it’s one of the better ideas we’ve come across for making the vast quanitities of content now available on Smart TVs potentially more accessible.

Undeterred by fairly widespread skepticism about the voice control interface of its 2012 TVs, Samsung has persevered with voice recognition system for all of its new Smart TVs. And based on numerous demos we saw of this system running on the F8000 series, Samsung’s efforts might actually have paid off. For starters, you can talk much more naturally to the TV than you could before, making the process feel immediately more intuitive right from the first moments you start using the TV.

Also, the voice recognition system now seems to have a much more obvious and practical use than before, in that it’s able to join forces with Samsung’s new content-searching engine to offer a genuine content-finding shortcut. For instance, we saw demos where just saying stuff like show me shows I might like and find football on TV tonight were enough to get the F8000 TVs to show lists of relevant content across all sorts of source options (tuner, online etc). In short, Samsung’s advances here could be enough to finally overcome our innate resistance to talking to our TV. Which is saying something.

Studying the UE60F8000’s pictures, the positive impressions continue for the most part. Colours are every bit as bold as we’re used to seeing from high-end Samsung LCDs, and they’re explosively bright too, battling through the bright show lighting more strongly than most.

Samsung traditionally has a few problems with backlight uniformity on its slim LCD TVs unless you reduce their backlight outputs considerably. But we’re pleased to report that during a behind the scenes demo of the F8000s in action, Samsung showed us a new Cinema Black feature that can subtly adjust the backlight in the top and bottom sections of the picture so that backlight clouding in the corners of the image is hugely reduced without the rest of the image losing its intensity. This feature is especially effective when watching wide aspect ratio films, which require black bars to appear above and below the image – the sort of content that’s particularly damaged usually by corner-based backlight clouding flaws.

It seemed to us that the picture’s generally high sharpness standards fell slightly when handling fast motion, but we don’t know what level and type of motion processing the demo sets were using, so we’ll reserve judgment on this until we get proper review samples, maybe as early as March.

Otherwise, though, with its much more logical and thoughtful ‘Smart’ features, sensational design and potentially very strong pictures, the UE60F8000 looks like continuing the Samsung TV success story.