QLED might be getting all the headlines, but it’s with lower-priced models such as the Samsung UE55NU8000 that the company really ships units, earning its position as the number one TV manufacturer in the world.

The Samsung UE55NU8000 borrows its look from the company’s more expensive QLED TVs, although given the much lower price point, Samsung has cut some corners in terms of material and build quality.

Nevertheless, it remains an attractive TV; it has a modern, slimline appearance. There’s a thin black bezel around the top and sides, and a dark silver strip along the bottom. The rear is black plastic, with a ridged effect to give it some texture. 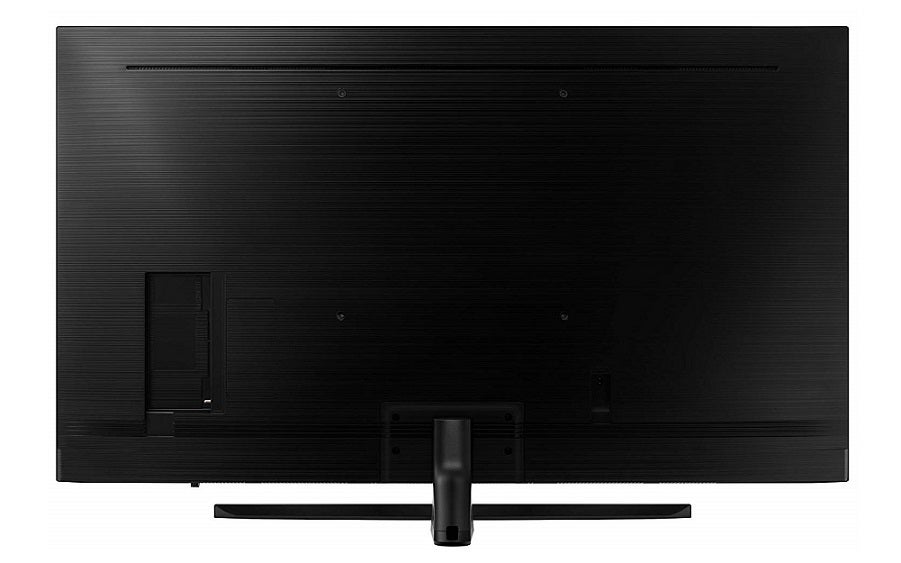 The panel sits on a centrally mounted T-shaped stand, styled in dark silver to match the strip along the bottom of the screen. The support column at the rear has a V-shape that gives the impression the screen is floating in mid-air.

The Samsung UE55NU8000 doesn’t use the separate One Connect box; instead, all the connections are at the rear of the panel. Here you’ll find four HDMI inputs that support 4K/60p, high dynamic range (HDR10, HDR10+ and Hybrid Log-Gamma), wide colour gamut, and HDCP 2.2. One of the inputs also supports ARC (audio return channel).

You also get two USB ports, twin terrestrial and satellite tuners, an optical digital output, a CI (Common Interface) slot, and a LAN port, along with built-in Wi-Fi.

The UE55NU8000 comes with Samsung’s One Remote, a small universal zapper that’s designed for day-to-day use. It’s comfortable to hold, intuitive to use, and even includes a built-in mic for voice control. A more traditionally styled controller is included, too, for those who prefer going old school.

The Samsung UE55NU8000 might lack quantum dot, but it does include Dynamic Crystal Colour, which is designed to deliver a wider colour gamut. It’s also marketed as HDR 1000, which would suggest it can hit a peak brightness of 1000 nits. 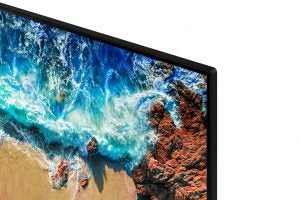 The UE55NU8000 supports 4K (3840 x 2160) and uses an an 8-bit + 2 dither 120Hz VA LCD panel with an Ultra Slim Array. The latter is essentially edge LED backlighting, but there’s also what Samsung calls UHD Dimming – although this is a dimming algorithm rather than actual dimmable zones.

There’s support for High Dynamic Range, specifically HDR10, Hybrid Log-Gamma (HLG), and HDR10+. Samsung is a big proponent of HDR10+, but it doesn’t support Dolby Vision, which is the other HDR format with dynamic metadata.

The Samsung UE55NU8000 includes the company’s full Smart TV system, which uses the latest version of the Tizen operating system and is integrated with SmartThings. This allows you to monitor and control any smart devices in your home via an on-screen hub.

You can setup your UE55NU8000 using your smartphone, with the SmartThings app (iOS or Android) seamlessly handling the entire process for you. It will establish an internet connection, add any relevant passwords, and set up the TV’s built-in tuners. 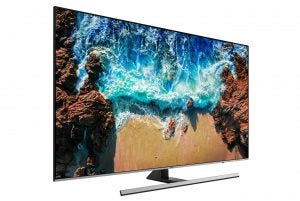 The smart platform is built around a launcher bar for quick and easy access to content. The TV Plus feature puts all TV content in a single location, alongside plenty of recommendations – which, thankfully, are now easier to find.

There’s a ton of apps, with just about every video streaming service including all the UK catch-up services, Netflix, Amazon, Now TV and YouTube. There’s support for 4K and HLG on the BBC iPlayer, along with 4K and HDR on Netflix, Amazon and YouTube, while Amazon also supports HDR10+.

The Samsung UE55NU8000 is very impressive in most aspects of its performance, although there are a couple of areas that disappoint.

First the good stuff. When it comes to standard dynamic range (SDR), this TV is capable of delivering a very punchy image. Colours are suitably natural and, as a result, images look pleasingly realistic. There’s also plenty of brightness, and a solid contrast performance. 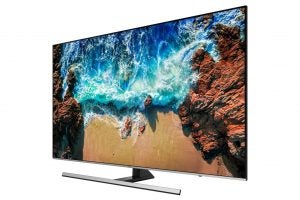 The level of detail is excellent, thanks to some highly effective image processing. Samsung has always produced sophisticated upscaling, and the UE55NU8000 is able to render every last pixel of detail as it scales lower-resolution content to match the UHD panel.

Speaking of the panel, it’s a VA (vertical alignment) type – which means superb black levels for an LCD TV. The backlight is composed of a strip of LEDs along the bottom of the screen – this approach isn’t as effective as a direct LED backlight, but it does result in TVs that are thinner and cheaper.

In addition, the UE55NU8000’s panel is 120Hz, which means it has better motion handling than the 60Hz UE49NU8000. The TV can take advantage of the panel having double the frame rate of standard broadcasting to generate a smoother image. This is called frame interpolation, and it can be highly beneficial when it comes to sport.

We wouldn’t recommend using it with films and TV dramas, however, unless you want them to look like soap operas. There’s also a 60Hz black frame insertion feature that can improve motion in films without making them look like cheap video. The downside is that you might see flicker.

The input lag is an incredibly low 18ms, which should please even the most demanding of gamers. Since this is an LCD TV, there’s also no danger of image retention or screen burn, which means that marathon gaming sessions aren’t only responsive but also worry-free. Other useful gaming features include support for VRR (variable refresh rate), and an Auto Game mode that switches the TV into Game mode when a console is detected via HDMI. 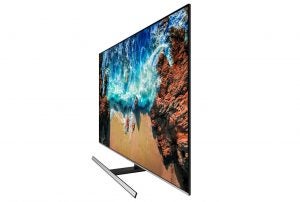 What’s not so good? The VA panel might result in deep blacks, but it also means the TV has fairly narrow viewing angles. This is just a side-effect of the technology, but it’s something to bear in mind.

The fact the LEDs are along the bottom means that the backlight can suffer from clouding. As a result, with darker scenes some parts of the screen will be lighter than others. It can vary from TV to TV, and the amount of ambient light in the room will also make a difference. The NU8000 generally delivered a decent SDR image, but black bars on films could suffer sometimes. The backlight uniformity was more of an issue at night, although a bit of bias lighting behind the TV could help in this regard.

Where this backlight uniformity became more of an issue was with HDR. The black bars in films would become grey rather than black, and you’d get columns of light when there was a light object against a dark background. The local dimming tried its best, but there was often haloing as well, with a glow around bright objects.

It wasn’t just backlight uniformity that affected this set’s HDR performance. Despite Samsung describing the NU8000 as HDR 1000, we actually measured the peak brightness at 875 nits. In reality, that should be bright enough for an effective HDR performance, but this was compounded by the backlight issues. The HDR colour accuracy could also have been better, with over-saturated reds and a blue-push to flesh tones.

The Samsung UE55NU8000 actually sounds quite good, which is surprising when you consider that it’s fairly slim and that the speakers aren’t only built into the bottom, but also fire downwards. These speakers form a 2.1-channel system consisting of two drivers and a woofer, all powered by 40W of amplification. 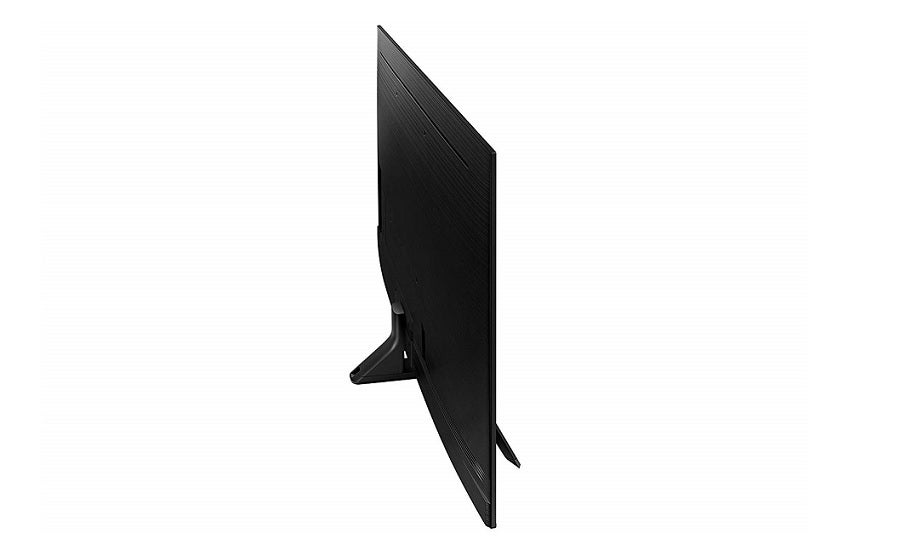 The TV can go reasonably loud, although if you push it too hard, the sound can become distorted and the woofer can actually shake the screen. The amplification might be a little too powerful for a TV this thin, so it’s best to keep the volume at a sensible level. Overall, the UE55NU8000 displays good stereo separation, and dialogue is intelligible, while effects and bass have some impact.

The Samsung UE55NU8000 is a very capable mid-range TV, with a decent set of features offered at a very competitive price. It’s attractively designed, boasts a state-of-the-art smart platform, and has an incredibly low input lag of just 18ms. It even sounds good, which is surprising in a TV this thin.

The SDR picture quality is very good, with impressive scaling, accurate colours and a solid contrast performance. However, when it came to HDR, the NU8000 was found wanting; inaccurate colours and backlighting issues caused by the LEDs could be seen at the edge of the screen.

Depending on your budget, there are alternatives. If you’re looking for a real bargain, then check out the Hisense 55U7AUK at £649. Build quality is excellent, and the SDR performance is comparable to the UE55NU8000. However, the U7A does struggle when it comes to HDR, with the Hisense unable to even reach 300 nits of peak brightness.

If you can stretch your budget to £1199, then take a look at the Sony KD-55XF9005. It sports a direct LED backlight with local dimming, which means it can deliver an impressive performance with both SDR and HDR. It’s more expensive, but the XF90 is currently the best mid-range TV.

This well-designed and competitively priced TV boasts a state-of-the-art smart system, excellent processing and a very low input lag, but it’s let down by a mediocre HDR performance.