The UE55JS9000 is a 55in TV from Samsung’s new “SUHD” range. The JS9000 series sits just one step down from the flagship JS9500 range, and benefits from such key SUHD features as a native 4K UHD resolution, High Dynamic Range (HDR) playback, an ultra-bright panel, and Nano Crystal colour technology.

The most distinctive – and potentially divisive – feature of the UE55JS9000’s appearance is its curved screen. It’s a far more prominent curve too, when compared to the relative shallow “bends” of some other brands of curved TVs. It gives the TV a very attractive look, especially when you add in the eye-catching “boomerang”-style stand and the bezel’s polished metallic-silver sheen. 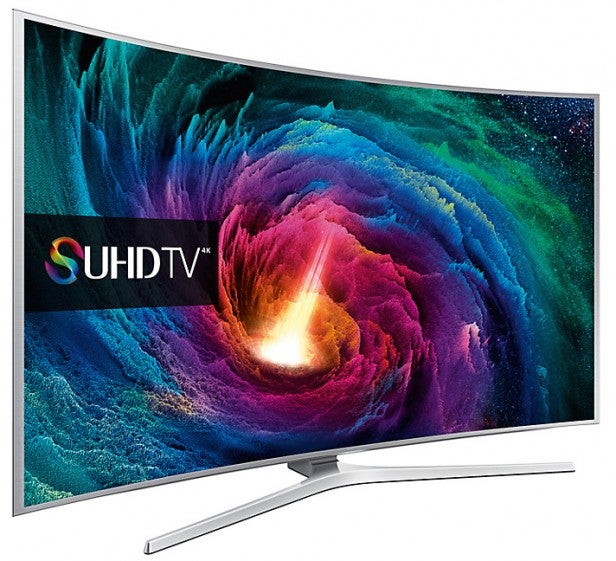 The only issue is that the supposed advantages of curved screens are diminished somewhat at a 55in screen size, which is you’ll have to factor into your buying decision. We’ll cover this in more detail in the Picture Quality section of this review – or, for a more in-depth exploration of the pros and cons of curved screens, check out our dedicated feature.

As with Samsung’s flagship JS9500 TVs, the UE55JS9000 comes with an external “One Connect” connections box. This carries four HDMIs, three USBs, the set’s network port (and integrated Wi-Fi), as well as the tuner inputs for both terrestrial and satellite feeds, with Freesat and Freeview HD tuners built in.

The One Connect box doesn’t only carry the TV’s connections; it also squeezes in the majority of the TV’s brainpower. Alongside reducing the cable spaghetti going into the UE55JS9000’s screen, the One Connect gives you the potential to upgrade the TV with future Samsung features and chipsets – and, potentially, new types of connection – simply by replacing your original One Connect box with a new one. This is superb future-proofing. 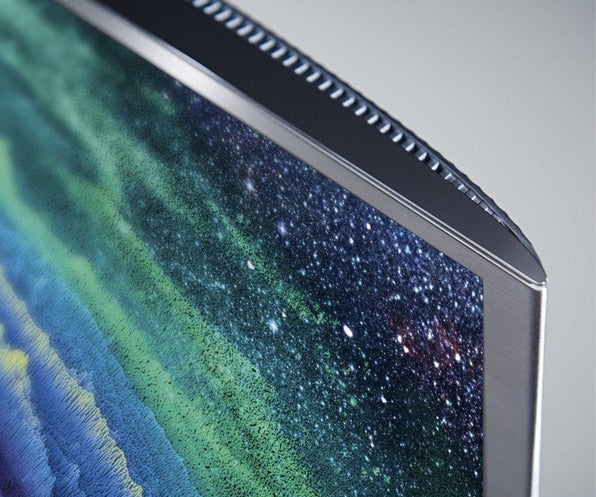 Not that the UE55JS9000 isn’t already more forward-thinking than most TVs. For starters, with its SUHD brethren, these TVs are already capable of playing the new HDR technology.

HDR images contain a much wider luminance and colour range than those of old video standards. And as described in our reviews of other Samsung SUHD TVs – the  Samsung UE65JS9500, for example – it’s a technology capable of offering arguably more immediate impact than a native 4K UHD resolution. Especially on relatively small TVs, where adding more resolution delivers less tangible benefits unless you’re sat close to the screen.

Other brands will be introducing HDR to a handful of their screens via firmware updates later this year. But none of those sets rival the brightness output of Samsung’s SUHD series, which is key for HDR tech. The JS9500 models claim a maximum brightness of 1,000cd/m2, while the JS9000 on test here claims 600cd/m2. 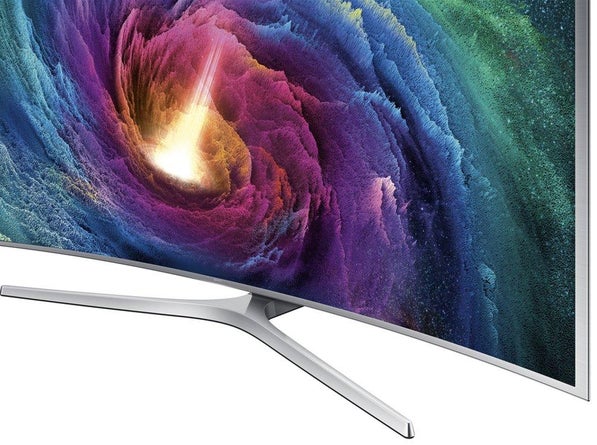 The Nano Crystal technology inside the JS9000 is also crucial for HDR playback, since it claims to produce a much wider colour range than typical LCD TVs. This amounts to 93% of the Digital Cinema Initiatives’ colour spectrum, which is far more than the range of the Rec 709 standard focused on by most TVs. Crucially, the UE55JS9000 employs 10-bit panel driving rather than the usual 8-bit, meaning it can resolve more colour gradations.

In addition, Samsung has introduced a new video-processing system to try to optimise all of its new core panel technologies. This includes processing for converting/upscaling non-UHD and non-HDR sources to the screen’s “next-gen” capabilities.

The UE55JS9000 is lit by an edge LED system rather than the direct LED one of the JS9500 models. This is the chief reason for its maximum brightness falling significantly below that of its more expensive siblings.

However, it still benefits from a local dimming engine, complete with Samsung’s excellent Cinema Black feature. This essentially deactivates the light that feeds the areas of the screen filled with black bars in films with a wider aspect ratio than the screen’s 16:9 one. This means you’re not distracted by light inconsistencies and fluctuations seen in normal edge-lit LCD TVs, which can stand out in such dark areas.

Wrapping up the UE55JS9000’s hugely impressive feature list is its new Tizen smart system and 3D playback. Sadly, this isn’t supported by any free 3D glasses – but as we’ll see, it’s actually worth buying a few pairs if you have even a passing interest in 3D.

Setting up the UE55JS9000 is a mixed bag. On the upside, it features a huge wealth of setup options that give you control over almost every part of its video-processing engine and colour/contrast/sharpness features. It also makes more of an attempt to automatically adjust its pictures in response to different types of incoming content. This is welcome, given how many different content types (standard definition, HD, Ultra HD/4K, HDR, non-HDR, and so on) the video market now contains.

However, the UE55JS9000 is rather low on picture preset options and, at the time of writing, its automatic picture-adjustment system is flawed/bugged.

The shortage of picture presets makes it much more likely that a high-end user will need to recalibrate a few of the four main presets provided, rather than finding one out of the box that’s already pretty close to their preferences.

Also rather confusing is this sets move to automatically switch to a default Movie preset when it detects HDR content, but then have a different version of the Movie preset available for watching non-HDR content. Surely it would have been simpler and more helpful for users to have an HDR setting that’s simply called HDR? 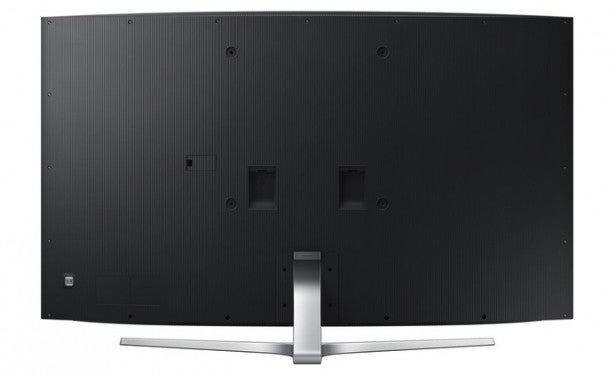 Samsung’s current firmware underlines this problem by keeping the Movie mode active when you switch back from HDR content to normal video – even if you had previously been using a different preset for that normal video source. This is particularly unfortunate, as the Movie preset the TV uses for non-HDR content isn’t particularly effective.

The good news for those not keen to manually set up a mode for HDR playback is that the default HDR version of the Movie preset is pretty good in most ways. It would be better if it turned off all the TV’s noise-reduction routines when it detects a UHD HDR source, and it seems a bit odd too that it doesn’t put the Cinema Black feature on as standard. However, it still does a good job overall of “selling” HDR without overcooking it.

It’s also worth pointing out that Samsung has a good track record of fixing the type of operating problems we’ve been talking about via firmware updates once it’s aware of them. Which it now is.

Other, more general, setup advice we’d offer would be to use the Smart LED local dimming feature on its Medium setting to get the best balance between black levels and backlight uniformity. You should also reduce contrast to around 82 from its maximum default; leave the Dynamic Contrast feature off since it can cause luminance instability and isn’t really needed; and that you don’t run the backlight higher than around its 13-14 setting to improve backlight uniformity.

Use the Cinema Black option to reduce backlight inconsistencies when watching ultra-wide film formats and turn off noise reduction for UHD and good-quality HD sources. It’s also worth experimenting with the mid-strength level of the motion processing, since it does a surprisingly good job of removing the sort of motion blur and judder that can stand out so much in a UHD image.