The UE55JS8500’s pictures make it a clean sweep of excellence for Samsung’s UHD range. In fact, by the time you’ve taken its price into account the UE55JS8500 makes a strong claim for being an even more attractive all-round proposition than the JS9000 models.

For starters, it needs to be reiterated again just what a difference HDR makes to TV picture quality. The HDR clips we were supplied with exhibited hugely more colour potency, contrast range and dynamism than the same sequences played off ordinary Blu-ray discs. This is especially true if you’re comparing the HDR sequences against a non-HDR TV. But there’s also a clear HDR advantage to be seen between native HDR on the UE55JS8500 and non-HDR on the same TV, despite the set actually being very astute with the way it applies its Nano Crystal and high brightness technologies to non-HDR footage. 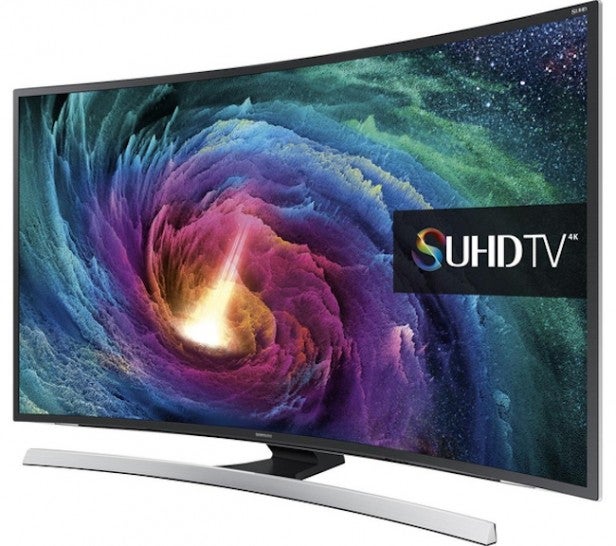 The only exception to this would be Sony’s spectacular 75X9405C model, with its phenomenal Triluminos colour palette. Though of course, this TV will set you back a ‘tad’ more than the UE55JS8500 at £7200 (and it’s actually going to be getting HDR via a firmware update later in the year, so perhaps it’s a bit optimistic to consider it a ‘regular’ TV!).

The UE55JS8500 also continues Samsung’s outstanding run of form when it comes to black level response and contrast. The UE55JS8500 can deliver superbly deep black colours for an edge LED TV – and once you’ve reduced the backlight output as suggested in the Setup section it delivers its deep, rich blacks without infusing the picture with distracting patches of backlight clouding. No mean feat when you consider how aggressively the TV is running, especially when it’s dealing with native HDR content.

The set’s black levels look stable and consistent too, proving the intelligence of the local dimming element of Samsung’s edge LED engine (though the JS9000’s edge LED system does appear to be slightly cleverer still). The set’s native contrast performance is strong enough, too, to leave images still looking quite bright despite the amount of brightness you have to remove to counter the backlight clouding potential. 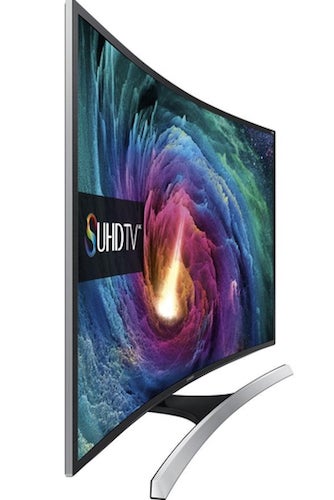 The UE55JS8500 also delivers handsomely on the detail and clarity attractions of its native UHD resolution. Native UHD footage looks so rich in detail and texture that it achieves that tell-tale ‘looking through a window’ feeling, as well as enjoying a greater sense of depth than you get with HD content.

Samsung’s upscaling processing is good enough, though, to ensure that HD content is remapped impressively well to the UE55JS8500’s vastly higher pixel count. The upscaling leaves images looking markedly more detailed and free of visible image structure while also doing a superb job of recognising and removing any noise an HD source may have contained. The upscaling on Sony’s 75X9405C delivers even sharper results, but at the expense of a little more noise – at least with grainy sources.

The stunning clarity of the UE55JS8500’s pictures is only very slightly reduced by motion blur during action scenes too – though if you try to completely remove the issue via the set’s motion processing you do end up with slightly less convincing results than you get with the more powerful processing brain of the JS9000 series.

Where the curved screen is concerned, 55 inches is just about big enough to sell the way a curved design can slightly enhance the sense of depth in images, as well as your sense of immersion if you’re sat close enough and central enough to feel a sense of the image’s edges curling in around you. The area where you can sit and really feel the benefits of the curve isn’t as large as it would be with a bigger screen though, and you also have to try and limit the impact of direct reflections, as the curve can cause these to distort across more of the screen area than would be the case with a flat TV. 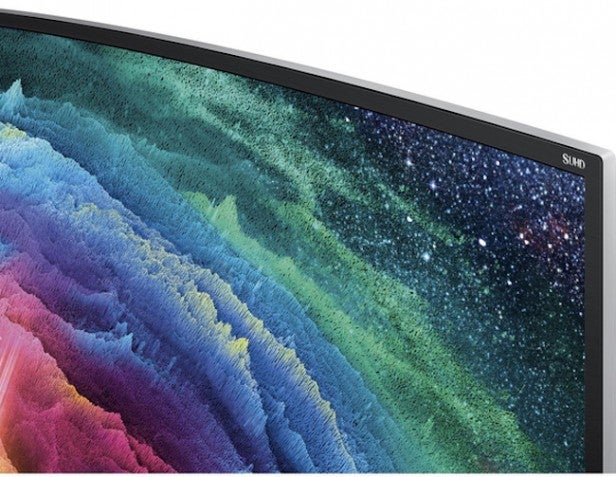 For the most part the UE55JS8500’s pictures are pretty sensational, delivering much more impact from the dual joys of 4K UHD and HDR than might have been expected so early in the two formats’ lives.

As with the JS9000 series, though, there are a couple of qualifications to discuss. First, the potential for backlight clouding from the edge LED lighting array (the UE55JS8500 seems slightly less precise with its backlight controls than the JS9000) means you’ll likely find, like us, that you need to reduce the backlight quite considerably to keep dark areas looking consistent. Which means you don’t get quite such a full HDR experience as you get with Samsung’s JS9500, which uses direct LED lighting and so can be left running much more brightly without suffering such obvious backlight inconsistencies.

To put some numbers on this, Samsung recommends leaving the backlight running at its 17 setting or higher for an optimum HDR experience, but we found we needed to reduce the UE55Js8500’s backlight to around 9 or 10, at least when watching films in a relatively dark environment.

One other side effect of this is that sometimes very dark areas can look a little hollow as small amounts of the shadow detail that’s actually one of HDR’s biggest attractions gets squeezed out.

Overall, though, despite its relative affordability the UE55JS8500 continues the SUHD theme of delivering pictures which are, in some ways, unlike anything we’ve seen before.

Used as the main TV for the review period
Tested for more than a week
Tested using industry calibrated tools, discs and with real world use
Tested with broadcast content (HD/SD), video streams and demo discs
Previous
Samsung UE55JS8500 Review Next
3D, Sound and Conclusions Review