The UE55HU8500 is Samsung’s flagship 55-inch TV for 2014. Which means it both enjoys a UHD/4K native resolution and a curved screen, as well as Samsung’s most powerful imaging system, complete with ‘PurColour’ technology. As usual this comes to a large chunk of money, but if you like the idea of a curved TV then this as good as any.

The UE55HU8500’s curved screen makes an instant aesthetic impact, raising a defiant and voluptuous two fingers to all those ‘boring’ pancake-flat TVs we’ve lived with for so many years now. Especially as Samsung uses a more severe curve than the ones seen recently on the upcoming Sony S90 TVs and LG’s inbound 4K OLED sets. 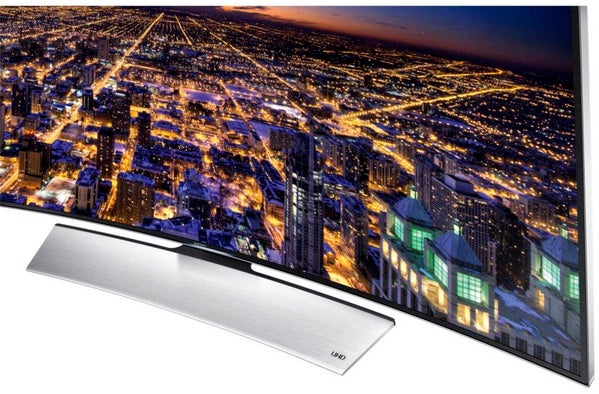 The curve is tastefully tracked by the beautifully built silver metallic desktop stand too, and it’s nice to see that Samsung has managed to deliver a super-slim bezel despite the potential structural issues associated with trying to bend an LCD TV. (LCD TVs are, after all, made up of many different layers, all of which have to be curved without losing alignment or causing light leakage.)

We’ll talk about the impact the curved design has on the viewing experience later.

Connectivity on the UE55HU8500 comes courtesy of an external ‘One Connect’ box that sports as its highlights four (v2.0 for 60p UHD playback) HDMIs, a LAN, integrated Wi-Fi, tuner inputs and a proprietary output connection for piping your various sources on to the TV.

Naturally this external connections box approach radically reduces the cable spaghetti going into the TV. Much more importantly, though, since the TV’s ‘brains’ are all in this external box you can swap it for future One Connects carrying Samsung’s next-generation features and technologies. In fact, using an external connections box means you could even upgrade the TV’s connections – something that’s very reassuring in these days of potentially ever-involving 4K-friendly HDMI and even DisplayPort connections.

The panel at the UE55HU8500’s heart is Samsung’s most advanced one to date, promising seriously impressive levels of contrast and colour quality. Especially as the high-grade, wide gamut panel is backed up by Samsung’s new PurColour technology, which delivers far more colour adjustment points than Samsung’s normal sets for a more refined, subtle and thus expressive colour palette.

The PurColour system is only possible because the UE55HU8500 employs a Quad Core Plus 1.8GHz processing engine that’s by far the most powerful processor Samsung has ever used. 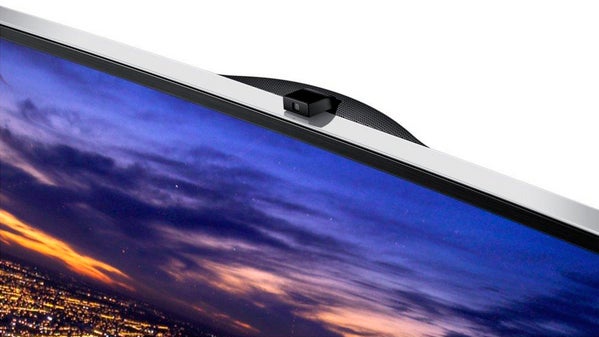 So powerful is this system, in fact, that it should also lead to refinements in the quality of Samsung’s upscaling to UHD from HD and standard definition sources, as well as the set’s 1200Hz-emulating motion processing. It additionally powers a local dimming system that enables independent control of different parts of the screen’s edge LED lighting array to boost contrast, and we’re hopeful too that it will pay dividends with the TV’s 3D playback given that the UE55HU8500’s active 3D system requires our HD 3D Blu-rays to be upscaled to UHD.

The processing power shouldn’t only help picture performance, either. We’d also expect it to play a useful role in keeping Samsung’s extensive, attractively designed and sophisticated smart features zipping along.

We won’t go into these Smart features in detail here as we’ve already covered them in a separate article. We’ll just sum things up by saying Samsung offers the widest selection of apps in the Smart TV world, dominated by an impressive suite of catch-up and on-demand video services that include all the key UK broadcast platforms, plus Netflix, and Amazon. In fact, you get the UHD version of Netflix, and will – initially exclusively – also get the 4K versions of Amazon when those services launch (supposedly later this month).

It’s worth adding on the 4K content front that Samsung is also just launching its UHD Movie Pack, a 500GB HDD containing eight films and a whole host of documentaries.

Overall, with its combination of an external, upgradable connections/processing unit, up to the minute connectivity options and uniquely expansive UHD content options, it’s fair to say this Samsung TV tries harder than any other TV in the UK right now to offer a full UHD/4K story.

We’ve long maintained that Samsung’s picture presets aren’t very useful, and this feeling continues even with this new flagship set. There aren’t as many presets as we’d like, and the ones you do get tend to push backlight, sharpness and contrast too high, resulting in issues like backlight clouding and excessive picture noise that are clearly visible during dark room viewing, at least.

Fortunately, though, the UE55HU8500 carries a huge array of picture adjustments. You can tweak pretty much every aspect of the 55HU8500’s pictures, from its noise reduction, motion, contrast and sharpness processing elements through to its colour, white balance and gamma subtleties.

It’s perhaps a shame you don’t get any specific tools for fine-tuning the way the UHD upscaling engine works like you do with the UHD TVs of Sony, Philips and Panasonic. In truth, though, the ordinary picture adjustments seem to work fairly effectively. The sharpness setting is particularly useful, we found, for nudging this down from its default levels greatly reduces the amount of noise visible in upscaled pictures.

Otherwise our main words of advice would be to: greatly reduce the backlight setting – to around its 8 or 9 setting – when watching in a dark room to minimise backlight clouding; turn off all noise reduction for native UHD viewing;  choose the Custom motion processing setting and set the judder and blur elements to their three level; and leave both the local dimming and dynamic contrast options to their Low (not off) settings.

One other thing we highly recommend is that you use the TV’s Cinema Black feature on its low or likely Mid setting. This does a great job of getting rid of any residual light ‘jets’ that might still be sneaking into the black bars you get above and below ultra-widescreen pictures.