The UE55HU8200 is a 55-inch curved UHD TV – which automatically makes it one of 2014’s most cutting-edge TVs. It’s not quite a flagship model – that honour belongs to the Samsung HU8500 series. But it’s only one step down from the top of Samsung’s range, so it still comes packing some serious feature and picture specification.

The UE55HU8200 truly is a sight for sore eyes. While the curved picture experience may not be to everyone’s tastes as we’ll discuss later, there’s absolutely no doubt that curved TVs look impressive. And actually the UE55HU8200 is even more attractive than most thanks to the way it almost seems to float above its boomerang-shaped, brushed aluminium stand.

It’s heavy by today’s TV standards, meaning you’ll need a pretty robust wall if you want to hang it up. But then we personally feel curved TVs look better on their stands than on the wall anyway. Plus the TV’s heftiness speaks volumes about its excellent build quality.

The only slightly disappointing thing about the UE55HU8200’s exterior is that it doesn’t contain a built-in camera like the HU8500s do – a miserly omission at this price.

The UE55HU8200 also differs from the flagship HU8500s in that its connections are all built-in, rather than existing on an external ‘One Connect’ box. However, this doesn’t mean you’re denied the opportunity to upgrade your TV like you can with the HU8500s, since there’s a socket near the HDMIs where a future One Connect box – with new processing, chipsets and even potentially connection types – could be attached. 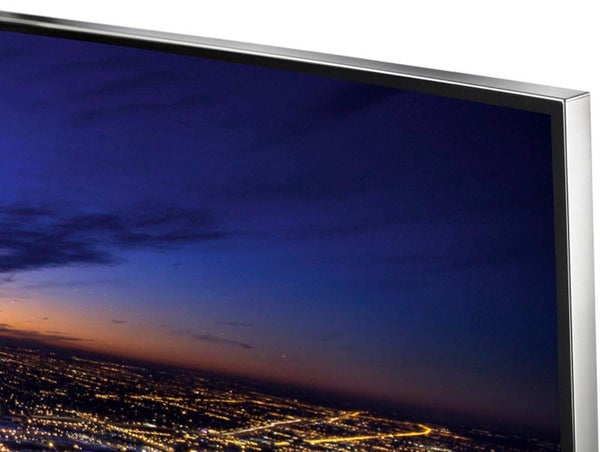 Highlights of the provided connections include four HDMIs (built to the latest UHD-friendly 2.0 standard, and supporting the new HDCP 2.2 copy protection format); hard and wireless network connections; and three USBs for both playing back files stored on USB drives or recording TV shows to connected USB HDDs.

The range of multimedia file types supported by the UE55HU8200 for playback from USB or DLNA networked devices is extensive, and the network connections also inevitably deliver a portal to Samsung’s online Smart TV service.

We’ve covered this service in-depth in our Samsung Smart TV 2014 review, so we’ll just sum it up here by saying that it’s got an attractive if slightly cumbersome interface and it carries more content apps than any other smart TV service. These include a huge selection of video streaming apps. In fact, it’s the only smart TV platform beside Panasonic’s that supports all the UK’s main terrestrial TV channel catch-up services – as well as the key Netflix (including 4K!) and Amazon Instant subscription platforms. 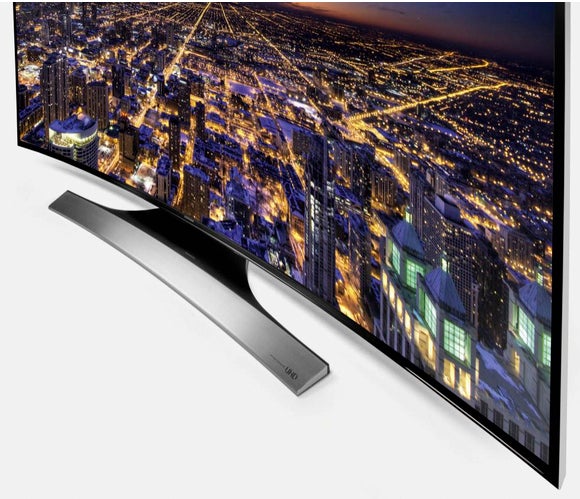 One other point to add is that the UE55HU8200’s Smart features and picture processing engine are built on a Quad Core engine rather than the Quad Core Plus system found in Samsung’s HU8500 flagship curved UHD TV series.

Also very likely to make a difference to picture quality, especially where contrast is concerned, is the fact that the UE55HU8200 uses a high-spec version of Samsung’s Micro Dimming technology, which breaks the picture down into thousands of small blocks for more accurate analysis, while the HU8500 sets use local dimming to deliver different lighting levels from different sections of their LED lights.

The UE55HU8200 inevitably supports 3D playback, and just as inevitably given this is a Samsung TV, this 3D playback uses the active system. So it upscales 3D Blu-rays to deliver 3D at UHD resolution. Two pairs of glasses are included free.

The initial set up routines Samsung provides for the UE55HU8200 are pretty decent now, guiding you through all the key options straightforwardly.

If you want to get more deeply involved in picture calibration thereafter, the set provides a huge collection of calibration controls. Highlights for serious enthusiasts include fulsome white balance and colour management tools, while more basic features everyone is recommended to familiarise themselves with include various noise reduction, edge enhancement, sharpness and contrast-boosting processing tools, and a backlight adjustment. 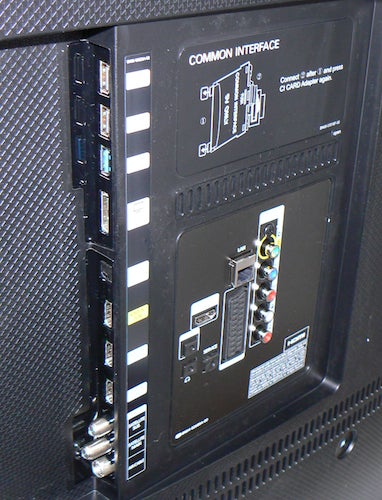 Most of the provided picture processing tools should be treated with suspicion. Certainly noise reduction should be turned off completely for UHD playback as it unnecessarily softens things up, and actually we’d leave it off for HD too.

We’d personally also leave off anything designed to boost sharpness, as the set tends to border on being actually over-sharp in its out of the box state. So much so, in fact, that we’d suggest turning sharpness down to around 40 from the default 50 setting used with most of the TV’s presets.

We also recommend that you reduce the set’s backlight to as low as its 8 or even 7 level when watching films in a dark room, as this delivers the optimum combination of black level depth and shadow detail while also getting rid of the backlight clouding that can be – quite aggressively – apparent using higher backlight settings.

Stick with the dynamic contrast system set on its Low level to preserve image stability, shift the colour temperature from Standard to Warm 1 or Warm 2 for watching films and finally, if you’re wanting to use a PC or games console on the UE55HU8200, don’t forget to activate the Game mode strangely tucked away in the General sub-menu of the System menu.