The UE55HU7500’s pictures are outstanding regardless of whether you’re feeding it a native 4K/UHD source or an HD one.

One of the biggest reasons for this is the screen’s superb black level response. Indeed, the UE55HU7500’s ability to produce a black colour that looks deep, rich and believable with no more effort required on your part than reducing the backlight to its 7-8 level feels like coming home after the greyness and messy backlight uniformity experienced with a few other manufacturers’ TVs recently.

What’s more, the native contrast range of the UE55HU7500’s panel is such that it can deliver its pleasingly deep black colours while also presenting strong amounts of shadow detail information, avoiding that hollow, flat look witnessed with some LCD TVs.

Good black levels tend to be accompanied by good colour, and this remains true with the UE55HU7500. Tones look vivid but natural, and there’s lots of subtlety to be seen in the set’s blends, regardless of whether you’re watching HD or UHD. The fact that the colour blending looks great with HD sources is an excellent indicator, too, of the quality of Samsung’s upscaling processing – something we’ll return to later.

The UE55HU7500 doesn’t exhibit as much exuberance or dynamic range with its colours as the UE55HU8500 thanks to the latter’s PurColour panel technology. This is especially noticeable during dark scenes, and also results in native UHD content not looking quite as pristine and detailed as it did on the HU8500. But compared with other UHD TVs in its price bracket the UE55HU7500’s colour handling is still excellent. 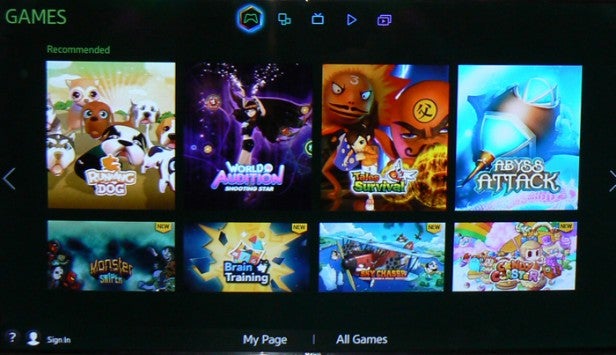 Its sharpness remains excellent, too. Native UHD feeds from both Netflix and an HDMI-connected UHD content server are gorgeously handled, with the screen delivering all the format’s spectacular extra detailing and subtleties without tipping over into noise if you don’t push the sharpness setting too high. The panel’s motion handling is excellent too, so that precious little of this gorgeous detail goes AWOL when there’s lots of motion in the UHD frame.

The UE55HU7500’s 55-inch screen proves amply big enough to highlight the advantages of UHD’s extra resolution – including, we’re pleased to say, the advantages a native UHD screen can bring to non-UHD source content. Samsung’s UHD upscaling engine is a brilliant effort, especially if you’ve taken care with the TV’s sharpness setting as described in the setup section. There’s palpably more detail and, especially, pixel density in upscaled HD images than you could hope to see on a mere HD screen, and it’s all added to images with stellar accuracy and naturalism thanks to the quality and power of Samsung’s processing engine.

Even standard definition images are delivered on the UE55HU7500’s screen without making them look soft, noisy or off-colour – a processing feat that’s borderline miraculous. Though ironically we wouldn’t expect many households buying a native UHD TV to be feeding their new beast much standard def content these days. 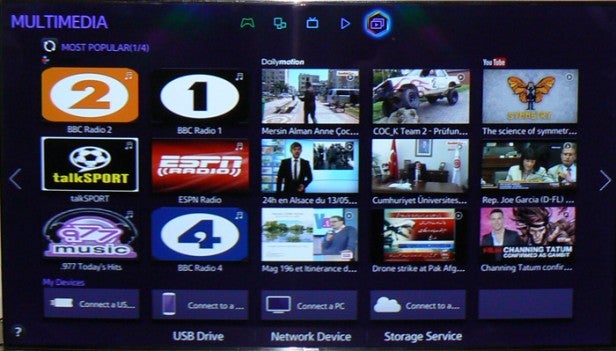 Trying to find fault with the UE55HU7500’s pictures is a tough business. It’s far easier to just be sucked into the visual feast and forget that you’re trying to be critical. The only things we managed to come up with are: the way the panel turns its LEDs off completely during fades to black or intensely dark shots, meaning you’re a bit distracted when they fire back up again; the way the screen is a little more reflective than we’d like; and the way both colour range and black level depths fall short of those of the HU8500 models. But then the HU7500 models do cost around £400 less than their HU8500 counterparts.

Used as the main TV for the review period
Tested for more than a week
Tested using industry calibrated tools, discs and with real world use
Tested with broadcast content (HD/SD), video streams and demo discs
Previous
Samsung UE55HU7500 Review Next
3D, Sound and Conclusions Review