The UE55HU7500 is the second UHD TV we’ve seen from Samsung’s 2014 TV range, differing from the first one, the Samsung UE65HU8500,
in one glaringly obvious way: it’s not curved. So if curves don’t do it
for you, the HU7500 range is Samsung’s highest-specced ‘mainstream’ UHD
TV option for 2014. 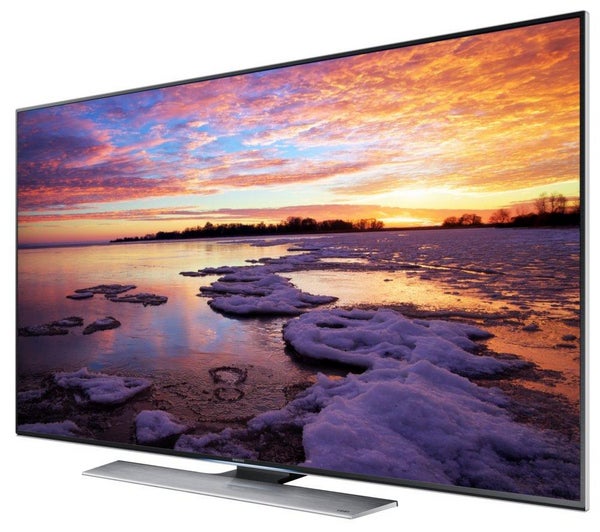 While
the UE55HU7500’s flat screen lacks the drama, flare and eye-catching
originality of the curved HU8500 models, it’s still a very attractive
hunk of cutting-edge AV. Actually, calling it a ‘hunk’ is unfair, for
the most striking thing about its design is its slimness. This applies
to both its bezel (which is under 8mm wide around three of its edges)
and its rear, which is one of the trimmest we’ve seen in a long while.

What
there is of the bezel is attractively finished too, and the set’s
all-round build quality is robust. We’re also fans of the heavy duty
‘wing’-style desktop stand, which resembles the one tucked under the
HU8500 except that it runs straight, in line with its flat screen,
rather than bending to follow the curve of the flagship model’s screen.

There’s
a big difference between the UE55HU7500 and the HU8500 series on the
connectivity front. Namely that the HU7500’s connections are built into
the TV rather than an external connections unit. However, this does not
mean the UE55HU7500 denies you the full hardware upgrade route of the
HU8500 series. It’s ‘One Connect Ready’, which means it carries the
necessary port to add future external Samsung connections boxes should
UHD/4K’s evolution ultimately lead to the introduction of a new
connection standard above HDMI 2.0.

For now the UE55HU7500
carries four of the new HDMI 2.0 ports, making it compatible with native
UHD material streamed in at frame rates of 50/60Hz with 12-bit colour
rather than the 8-bit colour limit you get with HDMI 1.4 ports. In fact
there’s even a new HDMI UHD Colour menu option that optimises the
screen’s performance for 50/60Hz signals with 4:4:4 and 4:2:2 chroma
subsampling.

Looking at slightly more mundane connectivity
options, you get three USBs, both LAN and Wi-Fi network connections, and
satellite and RF tuner connections to support the fact that the
UE55HU7500 carries both Freesat and Freeview tuners. 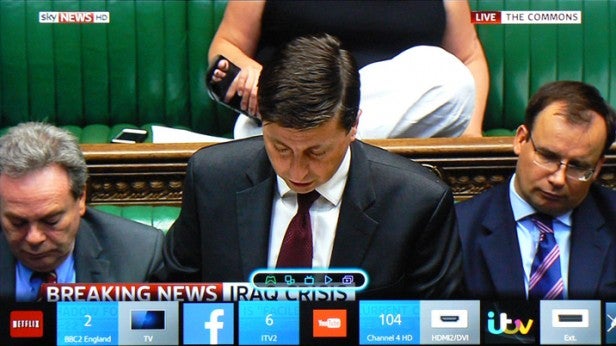 The
network connections enable DLNA streaming from compatible network
devices, as well, of course, as letting you get online with Samsung’s
latest Smart TV system. We’ve covered this system in our Samsung Smart TV 2014 review,
so there’s no need for us to enter into much detail here. Suffice it to
say that it’s outstanding on the content and feature fronts –
especially with its carriage of all the UK’s main broadcast catch-up
channels and sophisticated recommendations engine – but isn’t as easy to
learn your way round as it should be.

The smart system is driven
by a ‘mere’ Quad Core processing engine rather than the Quad Core
Plus system sported by the HU8500, meaning it’s got a fair chunk less
processing power to work with. But it still runs pretty quickly
considering how much it’s got going on.

One other smart feature
difference between the HU8500 and HU7500 aside from the reduced
processing power is that the HU7500 doesn’t have a built-in camera, so
is only Skype ready (with the addition of an optional extra USB camera)
rather than ready to establish visual contact with friends and family
right out of the box. The lack of in-built camera also means there’s no
support out of the box for Samsung’s face recognition or motion control
technologies.

The UE55HU7500 isn’t simply a flat version of the
HU8500 where its picture specifications are concerned either. It cuts
back on the spec in a few places – perhaps as part of Samsung’s strategy
to lure you towards its curved sets. Though also the UE55HU7500 does
only cost £2300 versus the the £2700 you’ll need for the 55-inch HU8500.

For
starters the UE55HU7500 doesn’t boast the PurColour technology of the
HU8500s, meaning its panel can’t deliver such a wide colour gamut. This
will, we’ll find, lead to the most significant reduction in the HU7500’s
performance versus its curved sibling. 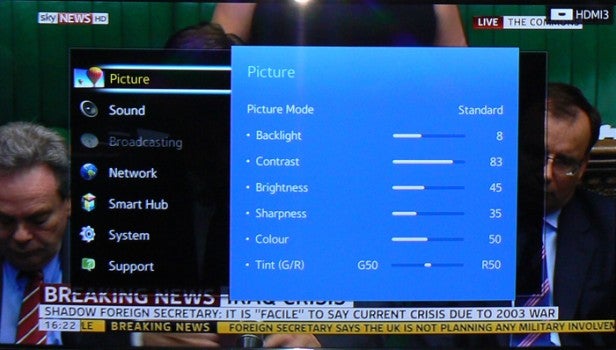 Its
motion processing is also a little less powerful, delivering 1000CMR
(Clear Motion Rate – Samsung’s name for its Hz-simulating combination of
a native 200Hz panel, scanning backlight, and frame interpolation
technology) versus 1200CMR on the HU8500. The HU7500 joins the HU8500 in
offering local dimming, but over fewer zones than the flagship model
and it’s not ‘hardware driven’.

The Quad Core (rather than Quad
Core ) processing engine will likely also slightly impact picture
quality since it means the HU7500 doesn’t have as much horsepower at its
disposal with which to calculate image improvements ‘on the fly’. So
those adjustments may not be quite as accurate or free of processing
side effects.

Then, of course, there are the differences in your
viewing experience caused by shifting from a curved to flat screen.
Given these differences are more extensive and complex than you might
think, we refer you to our Curved TV: Pros and Cons feature on the subject rather than getting bogged down in it again here.

The
UE55HU7500 ticks a couple of other key UHD boxes by supporting both
HDCP 2.2 copy projection and, crucially, built-in HEVC decoding so that
you can watch streamed 4K sources. Sources which, for now at least,
basically comprise just Netflix. House of Cards and Breaking Bad are now
available for 4K streaming on Netflix for people with broadband speeds
in excess of 15Mbps.

One last key feature to cover here is the
TV’s support of the active 3D system. This is backed up by the provision
of two pairs of free shuttering-type 3D glasses, and since it uses the
active system you’ll get a ‘full resolution’ 3D image rather than the
reduced resolution image associated with the rival passive 3D option.

Despite
not feeling inclined to follow Korean rival LG and sign up with the
Imaging Science Foundation (ISF), Samsung has equipped the UE55HU7500
with more than enough picture adjustments to do a high-level calibration
if that’s your wish. Colour management, gamma controls, white balance
fine tuning, multiple levels for all the many processing, lighting and
motion control options – they’re all present and correct. And actually,
we do strongly recommend you take the time to familiarise yourself with
them, given that none of Samsung’s four picture presets are especially
helpful. 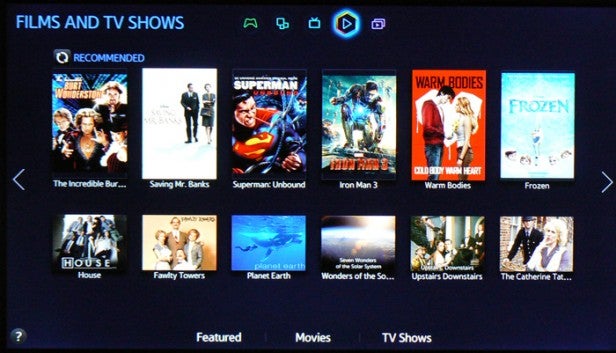 The
main problem with the presets is that they push the backlight setting
too hard, reducing black level response and causing some colours to look
over-bright. Sharpness levels are also too aggressive with some presets
too. Certainly if you’re watching in a fairly dark room environment you
should look to reduce the backlight setting to around its 7 or 8 level.
This does take quite a bit of brightness out of the image, but the
benefits make the brightness sacrifice worthwhile. And actually, the
HU7500 series’ use of local dimming makes it easier for images to still
look punchy even with the brightness set quite low.

We’d
recommend using the Smart LED local dimming system on its low setting,
but you’ll get the cleanest pictures if you turn off all noise reduction
when watching native UHD and even native HD material. When it comes to
the dynamic contrast system, either leave it turned off (the native
panel contrast is strong enough to support this) or else if you like the
bit of extra contrast punch it delivers, only leave it on its Low
level, for anything higher leads to some distracting brightness ‘leaps’
as the system keeps correcting itself to compensate for changes in the
source material.

We’d also recommend making sure the sharpness
setting when watching HD or UHD is set at its 35-40 level, as going
higher than that can make images look noisy.

One final
recommendation we’d make is that you choose ‘Custom’ for the motion
processing system, and set the judder and blur components both to 3.
This reduces judder without leaving the image looking overly processed.

Achieving
these recommended settings is reasonably straightforward via Samsung’s
picture menus, though it might be nice if one day Samsung tried to
introduce some sort of picture set up ‘wizard’.