We seem to have rather
stumbled into discussing the Samsung’s 4K upscaling, so even though
you’re probably salivating to hear about its native Ultra HD playback
capabilities, we might as well go on now to take a look at how the
upscaling performs.

The short answer is that it’s absolutely
outstanding, opting for a somewhat different approach to that of Sony’s
65X9005A, but delivering it so brilliantly that deciding which one is
best is futile. It’s just a matter of taste.

The first thing that hits you about HD pictures upscaled to Ultra HD (4K) by the Sansung UE55F9000 is their truly stunning level of detail and sharpness. Running the Samsung UE55F9000 right alongside a Sony 65X9005A, it’s very clear that Samsung’s upscaling approach delivers a more detailed finish.

With the set’s Natural and especially Dynamic picture presets this extreme detail embellishment is unfortunately accompanied by some pretty overt and thus distracting noise, such as excessive grain and stressy object edges.

But with the provided Movie and even, critically (since it’s the UE55F9000’s default setting), Standard presets, the sensational amount of detail Samsung’s processing adds to the picture is delivered with practically no nasty side effects at all. In short, you’re left staring agog at HD sources that have suddenly become 4K. Which is a pretty incredible achievement when you stop to think about just how many pixels the upscaling processing is having to calculate. 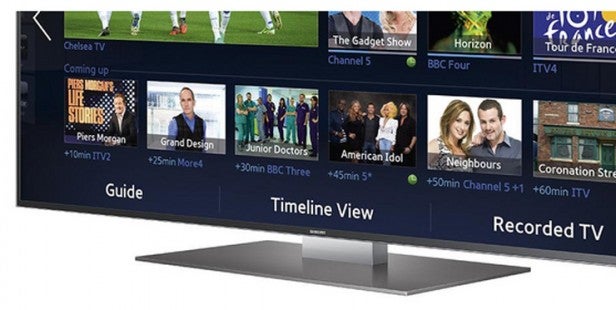 So why might anyone prefer the Sony’s upscaling? Because some may feel its less spectacular, gentler approach (it seems to focus on adding more pixel density rather than trying to greatly ramp up picture detail) is easier to become lost in, and the Sony model also has Triluminos technology on hand to help it deliver a visibly more richly saturated and finely nuanced colour palette.

So as we said, when it comes to upscaling, picking between the Sony and Samsung UHD/4K magicians is a matter of choice between incredible extra definition from the Samsung, and richer colours and a less showy, denser look from the Sony.

All that really matters, though, is that in their different ways, both upscaling approaches are far better than we could have imagined possible from the first generation of UHD/4K TVs.

As a side point here, we should also mention that we managed to get a startling and unexpected boost from the UE55F9000’s upscaling picture quality when we fed it Blu-rays from the  Samsung BD-F7500 ‘UHD/4K’ Blu-ray player. Although we have to confess that we don’t fully understand how it happens, apparently the TV and the Blu-ray player join forces in upscaling terms when they recognise each other’s presence. And the results are remarkable, as pictures look cleaner, more precise, more richly coloured and most surprisingly of all, possessed of better black level response and contrast.

While upscaled HD footage will make up the vast majority of content you watch on the Samsung UE55F9000 as we sit patiently waiting for true UHD/4K sources to arrive, what you doubtless really want to know is how it handles proper 4K/Ultra HD content.

Feeding the set a Samsung native Ultra HD showreel of pretty locations and odd but surprisingly effective close-ups of beautifully prepared food immediately delivered that same instant thrill we’ve experienced to some extent with every Ultra HD/4K experience we’ve had to date.

The amount of detail on show is mesmerising, giving pictures a level of precision and depth miles beyond anything possible with a normal HD image. Colours also look more natural in tone and blend, and the way the extra pixels make it possible for the screen to resolve colour blends with greater precision also helps the picture achieve a greater sense of depth and solidity.

Helicopter shots of city skylines provide a potent reminder, too, of the ability of Ultra HD-resolution footage to resolve a much deeper ‘horizon’ before the onset of softness and loss of pixel definition causes the image to flatten out. In fact, it’s when studying these sort of ultra-large scale shots that it becomes most apparent that, as with its upscaled HD pictures, the Samsung UE55F9000’s native Ultra HD pictures actually look slightly more rich in detail and sharpness than those of the Sony 65X9005A. The sense of extreme depth is just that little bit more profound on the Samsung set.

The fact that you can clearly appreciate both the sharpness and depth of the Samsung’s 4K TV images is made all the more impressive by the fact that it’s only a 55-inch screen. A size at which, some would have you believe, you shouldn’t be able to really see any benefit from Ultra HD playback over HD at all. And no, we weren’t watching the set from a stupidly short viewing distance during our tests. 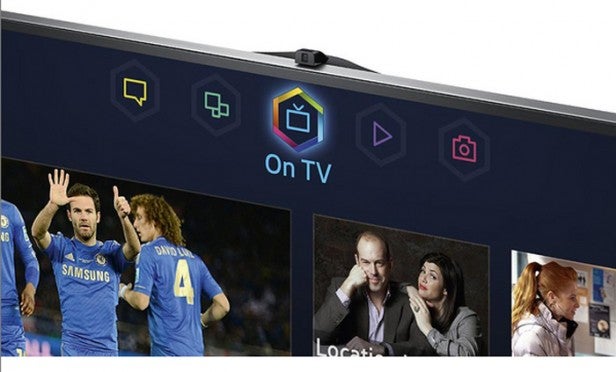 Watching native Ultra HD on the Samsung UE55F9000 also brings to our
attention a strength of its pictures we hadn’t really thought about
while testing its upscaled shots: some excellent motion handling.

It also became clearer to us while watching 4K sources that Samsung’s set is more comfortable when it comes to handling dark scenes than the Sony 65X9005A. It’s able to reach deeper native black levels, and dark scenes tend to look slightly more stable too. The set achieves this, moreover, while suffering only very rarely with any of the light blocking we were worried about earlier in the review.

The only slight disappointment with the Samsung UE55F9000’s contrast performance is that the set’s local dimming system isn’t able to emulate the Cinema Black feature sported by Samsung’s F8000 and F7000 models.

This means the brightness of black bars on ultra-wide aspect ratio films will vary a little as the set goes about its dynamic contrast/local dimming business in a bid to keep the contrast at its optimum, which may prove distracting. It’s a small price to pay for the outstanding picture quality, however.

While the Samsung UE55F9000‘s Ultra HD pictures are slightly sharper and higher contrast than those of the Sony 65X9005A, though, head-to-head tests reveal that the Sony has a UHD/4K ace of its own: colour intensity.

Compared to the Sony, the Samsung UE55F9000’s colours look a little washed out, and while edges tend to look slightly crisper and more defined on the Samsung, the Sony 65X9005 delivers more colour resolution, presumably thanks to the set’s Triluminos edge lighting technology. This can actually make some types of content – especially stuff with almost infinitely subtle colour mixes, like grass and sandy beaches – look slightly more ‘Ultra’ HD on the Sony.

Overall, though, as with the upscaled pictures, it’s more a matter of taste when judging the Sony and Samsung native Ultra HD images, rather than one approach being clearly better than the other.  In fact, both screens make Ultra HD/4K look so good it’s hard to go back to watching anything else.

Used as the main TV for the review period
Tested for more than a week
Tested using industry calibrated tools, discs and with real world use
Tested with broadcast content (HD/SD), video streams and demo discs
Previous
Samsung UE55F9000 Review Next
3D, Sound and Verdict Review