The UE48JU7500 is a 48-inch LCD TV with a native 4K UHD resolution and curved screen. It also has a pretty affordable price tag when considered against the eye-watering costs attached to Samsung’s flagship SUHD JS9000 and JS9500 series.

The UE48JU7500 is a striking TV. Its dark grey frame is reasonably trim and distinguished by the way it angles sharply back from its edges towards the screen, while the desktop stand’s design cunningly makes the screen look as if it’s somehow hovering magically above and behind a forward-jutting curved silver bar with a raised front edge. 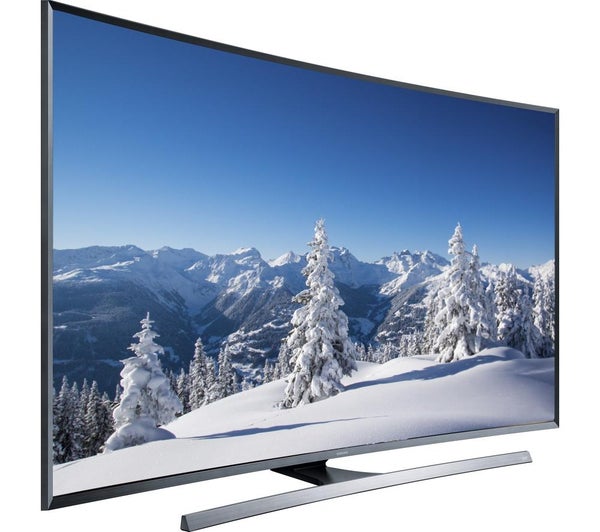 The chassis is a bit too chunky around the back and plasticky in its finish for the AV catwalk, perhaps, but overall the UE48JU7500 is more than attractive enough for a £1650 4K TV with a high level of picture specification.

We’ll get into the key elements of the picture specs in a moment, but first we need to cover the fact that this isn’t one of Samsung’s SUHD models. So it doesn’t feature the SUHD ultra-bright panel designs, nanocrystal colour technology and high dynamic range (HDR) playback capabilities.

It does, though, still benefit from a direct LED lighting system, meaning its pictures are illuminated by clusters of LEDs positioned directly behind the screen, rather than around its edges. This is generally a good thing, as it gives TVs more lighting control to boost contrast – especially when, as with the UE48JU7500, different sectors of the LED clusters can have their light outputs adjusted individually via a process known as local dimming.

The UE48JU7500 also employs a potent quad-core processing engine to drive the TV’s picture processing. This includes upscaling HD and standard-definition content to the screen’s 3840×2160 resolution, a potential 1400Hz-emulating motion system (delivered through a combination of backlight scanning and frame interpolation) and the always-on depth-enhancement features Samsung deploys with its curved TVs.

Talking of the curve, Samsung would argue that bending the picture delivers palpable picture benefits, such as enhanced immersion in what you’re watching, a greater sense of depth, and potentially more sharpness at the TV’s left/right extremities. However, while there’s an element of truth to these claims on large-screen TVs, the advantages are certainly diminished if not nullified at the 48-inch screen size.

Sadly the key curved TV disadvantages aren’t diminished. The curved TV issues of distorted geometry when watching from a viewing angle of more than 35 degrees, and exaggerated onscreen reflections, are if anything made worse when they appear on a smaller screen.

We’re not saying you shouldn’y buy the UE48JU7500 because it’s curved. You just need to be aware that the draw of the curve is arguably mostly aesthetic at this screen size.

As with the previously tested non-curved UE48JU7000, most of the UE48JU7500’s connections – including its HDMIs and USBs – are housed on an external box called a One Connect Mini. Unlike the larger One Connect box found with Samsung’s SUHD TVs, though, the Mini Connect doesn’t carry the TV’s brains, and so can’t be swapped out in future years for an updated model. In fact, the Mini Connect is only really there to reduce the number of cables you’ve got going into the back of your TV. And even in this respect it’s compromised, since the tuner inputs are still on the main TV chassis.

The other big new feature of the UE48JU7500 is its Tizen-powered Smart TV system. This ditches Samsung’s previous, rather over-powering and inefficient full-screen smart TV interface in favour of a much more friendly and focussed system built around neat, colourful icons laid over the TV picture. It’s very reminiscent, truth be told, of LG’s webOS system – but there’s nothing wrong with that – and does a decent job of focussing on content you’re most likely to want to by populating the home screen with direct links to the sources you’ve watched most recently.

The system does feel almost too stripped down at the moment – maybe this will change when Samsung adds a recommendations system later in the year – but it’s still a big step in the right direction for the Korean brand. For an in-depth look at Tizen for TV, see our dedicated review.

At the time of writing, how you set the UE48JU7500 up is absolutely critical. For during our tests we found that the only way we could stop the picture falling prey to severe amounts of motion blur and lag was to switch to the Movie preset and turn off all of the noise reduction settings. With the other picture presets, no matter what tweaks we made to their settings, the excessive blurring was ever-present. 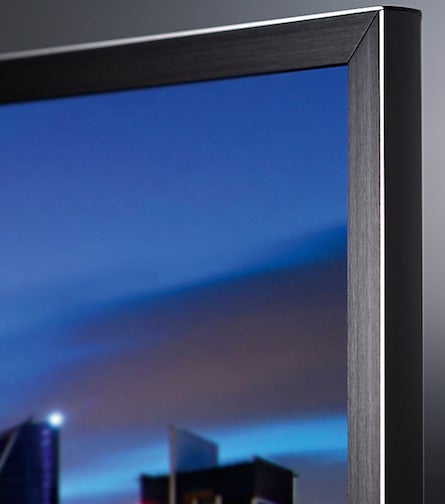 Bizarrely the blurring even remained if we copied every single picture setting we were using successfully in the Movie mode to the Standard preset, suggesting that all the picture settings bar the Movie one are using some sort of video processing that can’t be turned off.

Even weirder, the blurring issue only seems to happen conclusively in our test labs; it doesn’t appear to happen when the same TV is used down at Samsung HQ! But we’ve now experienced it on two related Samsung TVs, so clearly something weird is going on. If Samsung comes up with a firmware fix for the motion issues we’ve seen with all non-Movie presets we’ll update this section of the review.

The good news is that while you have to start all your picture setup efforts with the Movie preset, which suffers with backlight clouding and muted (albeit accurate to the Rec 709 standard) colours in its out-of-the-box state, you can access all areas of Samsung’s calibration toolset and so make the Movie preset look pretty much exactly how you want it to look.

Key moves we’d recommend – on top of turning off noise reduction – would be to turn on the Smart LED feature to its Low or, at a push, Medium setting to boost contrast and get rid of the clouding problem; to set the dynamic contrast feature to Low; and to set the Motion control system to its Clear level or, even better, a Custom mode with judder and blur set to around 3. We’d also suggest that you play with the different settings of the UHD colour mode.

One last thing to remember is to hunt out the Game option – hidden away in the General sub-folder of the System Menu – for gaming, as this reduces input lag. Though remember to turn it off if you’re using your games console for video streaming.