The UE48HU7500 is both the smallest (48-inches) and cheapest (£1,500) UHD TV we’ve tested to date. Which raises interesting questions about whether UHD/4K really has anything to offer once you get below 55-inch screen sizes, and whether it’s worth still thinking about a premium HD TV when UHD is now so affordable.

The UE48HU7500 is slightly hit and miss from a design perspective. The heavy-duty ‘wing’ metal stand is very appealing, and the bezel is fashionably slim. But despite the HU7500 resting towards the top of Samsung’s 2014 range the main chassis is a little flimsily built versus the current high-end offerings from some rival brands – notably Philips and Panasonic. 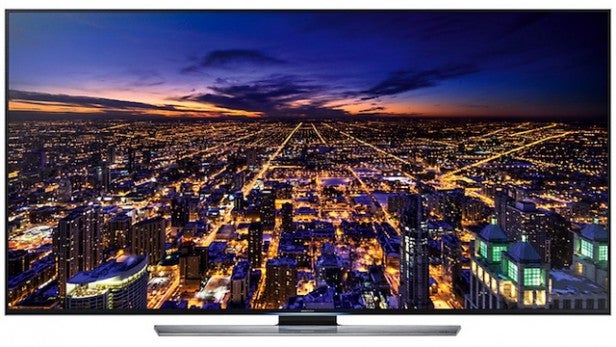 Connections are plentiful. Highlights comprise four HDMIs; three USBs for both multimedia playback and recording to USB HDD from the built-in Freeview HD and Freesat HD tuners; and built in LAN/Wi-Fi network options. These connections are all built directly into the TV, rather than being found on an external (swappable in the future) connections box like they are on Samsung’s HU8500 series.

The HDMIs are, significantly, built to the 2.0 spec level, meaning they can handle UHD at 50/60Hz without compromising colour fidelity as much as they did last year. As for the network options, these inevitably include multimedia streaming from networked DLNA-enabled devices, a decent degree of file and second-screen viewing functionality with Samsung’s latest (and much improved) Smartphone/tablet TV companion app, and of course access to Samsung’s latest Smart TV platform.

It’s important to stress after failures in both areas by some other brands that the UE48HU7500 supports Netflix 4K streaming through its integrated HEVC decoder, as well as the new HDCP 2.2 anti-piracy protocols.

Samsung’s 2014 smart platform has been covered in depth in our Samsung Smart TV 2014 review, so there’s no point wasting words on it again here. Very quickly, though, it impresses greatly with its presentation and content – especially its provision of apps for all the key UK catch-up and on-demand streaming services – while also offering one of the most effective programme recommendation engines on a Smart TV to date. But its interface feels a bit clunky and impenetrable at times, and is also too ambitious with its attempts to integrate voice and gesture controls.

The 48HU7500’s star picture attraction is, of course, its native 3840×2160 UHD resolution – a resolution that should lead to images looking even more free of pixellation than they do on larger UHD screens, given that all these pixels have been crammed into a smaller area.

Samsung backs up its UHD picture headliner with a high-powered version of its Micro Dimming technology, which breaks the picture up into thousands of small ‘blocks’ for more accurate processing when deciding how best to treat each frame of an incoming image. There’s also a 1000Hz-like motion engine, created through a combination of backlight scanning, a native 200Hz panel and optional frame interpolation processing. 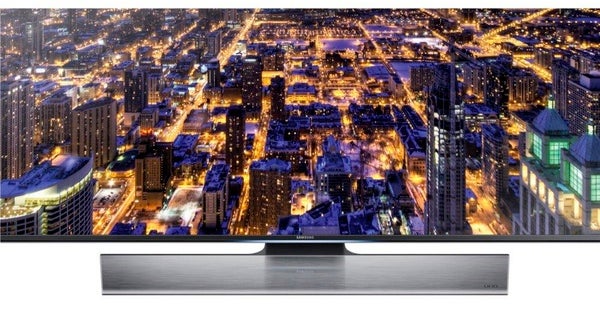 The 48HU7500’s menus are packed with processing tools too, including edge enhancement, sharpness enhancement, noise reduction, colour boosting and contrast enhancement options. And the whole processing kit and caboodle is driven by a powerful Quad Core engine that should reduce picture processing artefacts as well as keeping the smart menus zipping along.

One last key feature of the UE48HU7500 is its 3D playback. This is of the active type always used by Samsung, and is available right out of the box thanks to two pairs of 3D glasses being included for free.

Samsung’s HU8500 range-topping new 4K models use Quad Core Plus processing, even more finely tuned micro dimming, and impressive PurColour technology to deliver a noticeably wider, richer colour palette. Oh, and they’ve got curved screens too! But while all of these things with the possible exception of the curve are significant reasons to try and step up to the HU8500 series, the UE48HU7500 is still a very well specified set for £1500.

While Samsung is slowly improving some aspects of its TV presets, we still think there should be more of them, and have issues with the four you do get. Most notably they all leave their backlight and contrast settings too high, leading to so-so black levels (including some backlight clouding issues) and excessive noise. 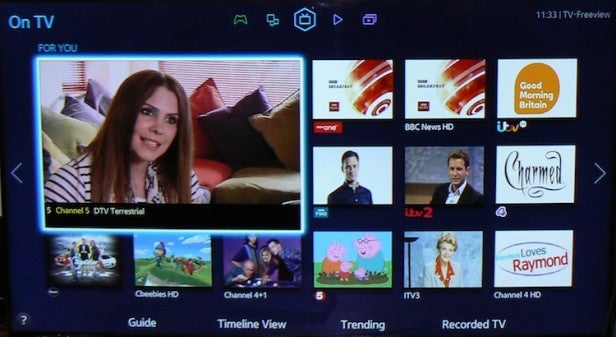 To be fair we guess the Standard preset works decently enough in a bright room with normal TV footage, but if you’re watching something with a wider contrast range and lots of dark scenes – like a typical film – in a darkened room you should drop the backlight to as low as its 8 setting and contrast to around 82-83.

Also best switched off with HD sources are the noise reduction and edge enhancement processing. Regarding motion this set enjoys the best balance between dodging judder/blur and not causing too many distracting processing artefacts if you use either the Clear setting or a custom setting with the judder and blur components both set to around three.

We sometimes also felt the need to nudge down the UE48HU7500’s sharpness a bit, to stop pictures looking a touch noisy or stressy around the edges of objects. But the crucial thing to finish on is that while a little set-up work is required, the results make your efforts more than worthwhile.