While the UE48H6700’s pictures aren’t flawless, they’re easily accomplished enough in key image areas to make the set great value for such a feature-rich TV. Especially in the context of a year where we’ve seen a higher than usual number of TV disappointments.

The star attraction of the Samsung UE48H6700’s pictures is their black-level response. The VA panel is able to produce a much deeper, more natural black colour than you see with rival IPS panels of the type found in a a number of TVs from a variety of manufacturers this year. And since the UE48H6700 doesn’t have to work as hard as IPS panels to produce a convincing black colour, you can enjoy a more dynamic, natural-looking picture free from the excessive brightness jumps and distracting light ‘blocks’ associated seen on most IPS TVs.

It’s great to see, too, that the UE48H6700’s deep black levels aren’t blighted by any serious backlight clouding, where patches of the screen are unevenly lit. There’s the faintest trace of light seepage in the bottom right corner, but it’s never really distracting. 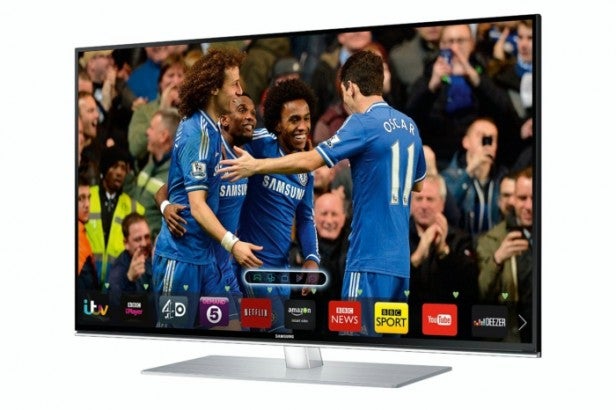 Since the UE48H6700 doesn’t have to rip too much light out of images to deliver a credible black-level response, it also does well for such an affordable TV when it comes to reproducing shadow detail in dark areas – especially if you’ve turned off the Black Level booster. Being able to see plenty of shadow details helps dark scenes enjoy a richer sense of depth and space that makes them feel like a more natural fit with the brighter sequences that accompany them.

Strong black levels commonly lead to strong colour response, and the Samsung UE48H6700 follows this trend perfectly. Movies and HD TV shows alike enjoy a pleasingly dynamic but more importantly very natural palette that’s as at home with tricky low-lit skin tones as it is with the richness of an animated movie. Particularly impressive versus the competition is how credible and nuanced colours look in dark parts of the picture.

Samsung can usually be relied on to deliver bags of detail with its HD and 4K TVs, and the UE48H6700 is a chip off the old block in this respect. Indeed, pictures can look a bit too sharp in their out-of-the-box condition. But it only takes a few seconds to calm them down to more natural – but still ultra-detailed – levels via the simple sharpness tool.

Motion handling is the weakest part of the UE48H6700’s picture performance, with a slight reduction in clarity and some minor judder over moving objects if you don’t use the set’s motion processing system. But there are some pretty distracting processing side effects at times – especially during camera pans – if you do use the motion processing, especially on any setting higher than its Clear mode.

The set’s upscaling of standard-definition broadcasts isn’t quite as good at subduing source noise as we would have liked it to be, either. But ultimately neither of these flaws prevents Samsung’s now strikingly affordable feature-rich HD TV from outgunning the vast majority of its rivals.