We came across a couple of other little distractions with the Samsung UE46F7000’s pictures, too. First, whenever there’s a fade to black the TV tends to turn its illumination off entirely, delivering a slightly ugly sudden shift in black level tone as the image suddenly shifts to almost total blackness before then ‘sparking up’ again when some brighter picture elements reappear. There’s also a slight delay in the lights coming back on.

Another small issue is a very slight glowing effect over areas of picture containing lots of fine striped detail – such as in Ollivander’s (John Hurt’s) shirt as he is questioned by Harry Potter near the start of Harry Potter and The Deathly Hallows Pt 2. 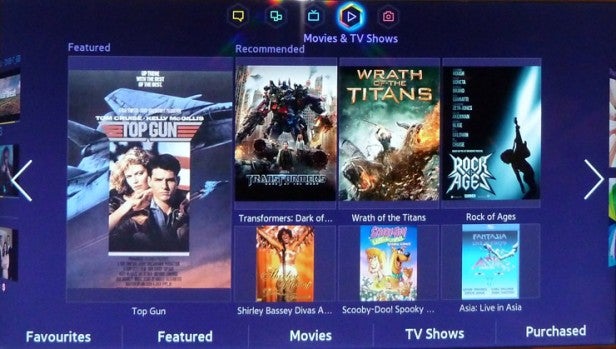 Turning to the Samsung UE46F7000’s audio, it falls significantly short of the Samsung UE55F8000. The F8000 series enjoy a total of 40W of audio power, delivered by two 10W mid-range drivers and two 10W woofers. But the UE46F7000 dispenses with the woofers, immediately taking away a large chunk of bass from the audio mix, as well as increasing substantially the burdens on the mid-range speakers.

This latter fact causes the mid-range to sound cramped and the treble range to sound a touch harsh when the speakers are pushed at all hard. Worse, the TV routinely suffers buzzing, phutting distortions as its speakers struggle to handle bass – even if you’re only using a fairly moderate volume level. 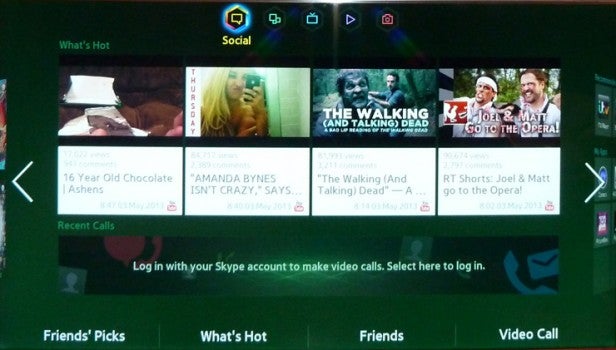 Having ditched our usual review structure in order to launch
straight into the UE46F7000’s performance, we need to backtrack before
we’re done to take in the set’s design and features.

Design-wise, it’s another extremely slim-framed design from Samsung, though it uses a silvery finish rather than the black of the 8000 series. It also sits on a more straightforward rectangular plinth stand rather than the startling full-width arc design of the F8000 stand.

While its stand might not be as eye-catching as that of the F8000s, though, it will for some people be more practical, as it doesn’t require you to place the TV on a stand that’s at least as wide as the screen to stop the screen toppling forward!

The Samsung UE46F7000’s connectivity and smart features are essentially the same as those of its flagship brethren. There are Freesat and Freeview HD tuners, which leaves you with plenty of flexibility.

There are four HDMIs and three USBs – the USBs are handy for recording TV from the tuners and playing media files – and wi-fi is built-in. This means you can stream media from DLNA compatible devices on your home network, and enjoy Samsung’s excellent smart TV features. It has the most complete content library of any smart TV system and a sleek, if occasionally fussy, interface and recommendation system. 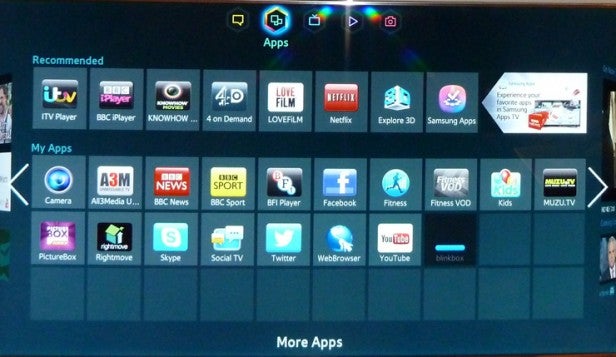 Like the F8000, the F7000 TVs ship with two remotes (one containing a touch-pad control and a built-in mic for use with the TV’s voice recognition feature). It also supports Samsung’s Evolution Kit feature, which means you can upgrade the chipset in your TV as new features and operating systems are developed in future.

After a little calibration work the UE46F7000 ultimately turns in a very strong picture performance. We recommended saving up for Samsung’s superior F8000 series if you can, but if you really can’t stretch your budget that far, the Samsung UE46F7000 still lets you get your hands on a healthy chunk of Samsung’s current design, picture quality and smart TV prowess for a more palatable price.