Samsung’s TV range this year is so extensive that we wouldn’t be surprised if the brand’s own product managers struggled to remember exactly which features define each model. This is especially true of the mid-range six series, where there are 6900 models, 6800 models, 6710 models, and the 6300 models under scrutiny today in the shape of the 46in Samsung UE46ES6300.

With so much potential for confusion, our first job should probably be to pick out which key features establish the Samsung UE46ES6300’s position by comparing its spec list against the other 6-series LCD set we’ve seen recently, the Samsung UE46ES6800. 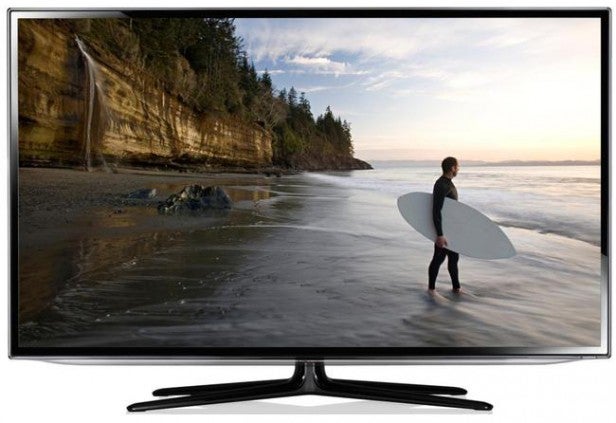 Micro dimming is a proprietary Samsung system that breaks the picture down into small segments for analysis so that the TV’s automatic backlight, contrast and brightness controls can do a more effective job of continually optimising the picture’s settings. So not having it on the Samsung UE46ES6300 will likely reduce its contrast performance. How much remains to be seen.

The shift down to 200CMR, meanwhile, will likely damage the UE46ES6300’s motion clarity versus its more expensive sibling.

Aesthetically the Samsung UE46ES6300 is surprisingly attractive for a 46-inch TV available for under £700. Its bezel isn’t as super-slim as the ones wrapped around Samsung’s flashiest TVs, but it’s still less than 2cm across. Most of the bezel is black, but a little cuteness is added by a see-through plastic outer cowl.

Connections are solid. There’s a disappointment in that you only get three HDMIs rather than the now-common four. But a surprising plus is that the expected Freeview HD tuner is joined by a Freesat HD one for folk still not able to receive Freeview HD broadcasts or who prefer the Freesat HD proposition.

The Samsung UE46ES6300 also has three USBs for playing back photo, video and music files from USB storage devices, or you can stream the same sort of files from a DLNA networked PC via either a LAN port or the UE46ES6300’s built-in Wi-Fi. 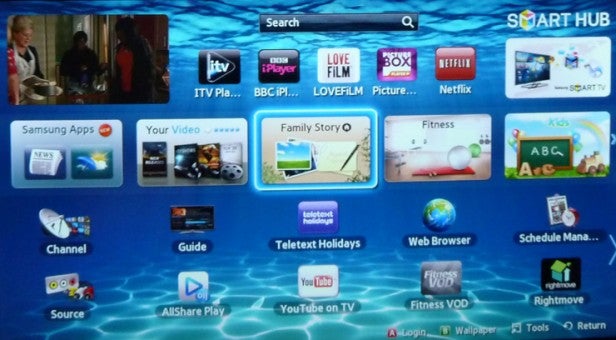 These network connections further permit you to go online with Samsung’s latest Smart TV system. This is a good find at the Samsung UE46ES6300’s price level, especially given that the online TV services are the most content-rich and beautifully presented such services currently available. Stand outs on the platform include the BBC iPlayer, the ITV Player, YouTube, Netflix, LoveFilm, KnowHow TV, Curzon on Demand, Acetrax and PictureBox.

The last major feature on the Samsung UE46ES6300’s spec sheet is active 3D playback supported by two pairs of free active shutter glasses. This makes the decision by Sony and Panasonic not to include free glasses with the majority of its 3D TVs (or any, actually, in Sony’s case) look very stingy.

Having just mentioned 3D, we might as well kick off the testing phase of the review by looking at the Samsung UE46ES6300’s handling of the 3D Blu-rays of Prometheus and Tangled. And the news is predominantly good.

Particularly impressive is how dynamic and colourful images look, as donning Samsung’s exceptionally lightweight active shutter glasses results in a much smaller drop off in image brightness than we would have expected.

Next, although the Samsung UE46ES6300 3D images don’t look quite as ‘full HD’ as they do on sets higher up Samsung’s range, they’re still pleasingly sharp for most of the time. Not least because the set avoids the heavy-duty motion judder that’s oddly common with active 3D TVs, and also because the set doesn’t suffer badly at all with crosstalk ghosting noise. There’s a little bleeding where light objects sit alongside dark objects in the far distance, but this isn’t common or severe enough to be a deal breaker by any means.

The only rider to this is that you need to let the Samsung UE46ES6300 warm up for at least 45 minutes before watching any 3D sources, for until then crosstalk levels are much more aggressive. 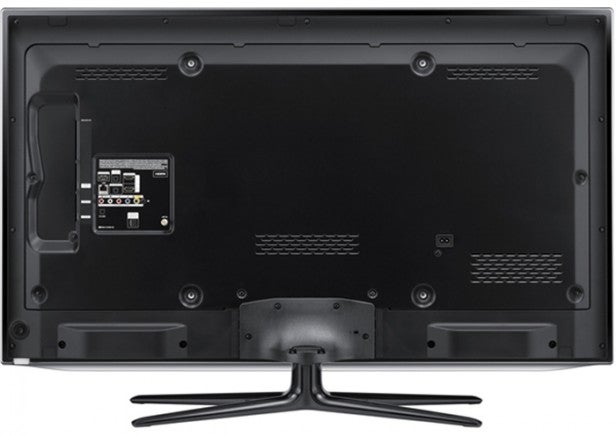 The sense of depth in 3D pictures is strong and natural too, partly because of the reasonably limited crosstalk interference and partly because pictures enjoy a pretty decent contrast performance in 3D mode. In fact, thanks to the natural dimming action of the glasses, its 3D playback looks largely free of the contrast flaws we’re going to be faced with in a moment when we turn to 2D viewing.

Aside from the minor crosstalk noise already noted, the only other issue we’ve got with the Samsung UE46ES6300’s 3D pictures is that colours aren’t as subtly defined as they are on Samsung’s top-end 3D TVs, with more evidence of banding/striping over colour blends.

As ever with Samsung’s 2012 TVs, before getting serious about testing its 2D picture performance we need to calibrate images away from Samsung’s unhelpful presets, which push the backlight and contrast settings much too aggressively, so that colours look a bit cartoonish, noise levels look exaggerated, black levels look washed out and the backlighting look inconsistent during dark scenes. 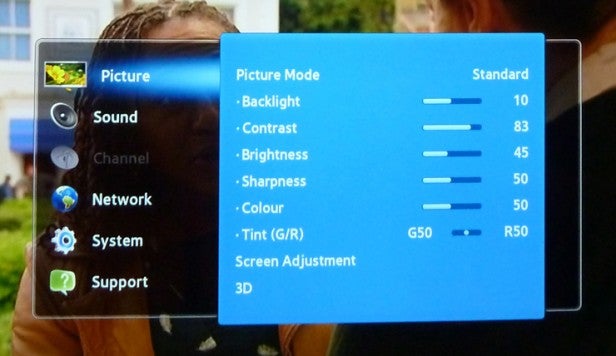 However, while these settings improve things, they certainly don’t result in dark scene perfection. For instance, even with the backlight set as low as six – at which point, let’s not forget, we really have taken a lot of brightness out of the picture –  there remain visible backlight uniformity flaws, where some parts of the picture look cloudier than others. These flaws can be especially distracting if you’re watching a letterboxed film.

There’s also more general greyness handing over very dark scenes than there tends to be with Samsung’s higher-level sets, which immediately makes such scenes look less convincing. It also causes a slightly cool tone to be injected into colours in the darkest parts of the picture.

The UE46ES6300 suffers worse from these problems than the UE46ES6800 or, especially, Samsung’s premium ES7000 and ES8000 models – a result, we suspect, of the cheaper model’s lack of micro dimming technology.

We were also disappointed to find the Samsung UE46ES6300 suffering from a common Samsung issue where if there’s a fade to black in a film, the TV actually turns off all its lighting momentarily. This sounds a good idea on paper, perhaps, but in reality switching the lights off and back on again in this way can be a very distracting experience.

While we’re in a negative frame of mind, the Samsung UE46ES6300 also falls short of Samsung’s step-up TVs with its motion processing, as fast-moving objects and camera pans clearly lose a little clarity versus static images. This makes action-packed HD pictures look softer than they do on the step-up UE46ES6800.

However, to put this in perspective, the degree of resolution lost over moving objects isn’t actually at all dramatic by the standards of the set’s price point, and can be improved a little by the ‘Clear’ option of Samsung’s motion processing system (the higher settings for it tend to look too unnaturally fluid for our tastes). 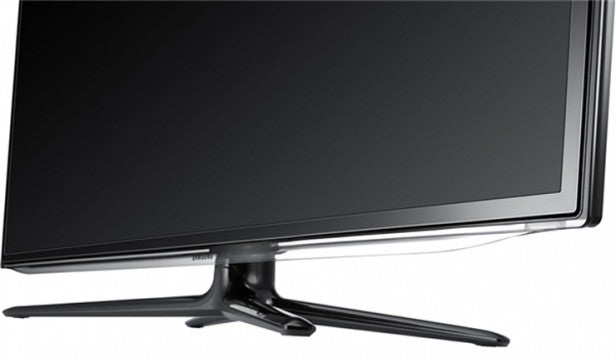 The Samsung UE46ES6300’s relatively budget nature is apparent, too, in its handling of standard definition. For images look softer, slightly less naturally coloured and more prone to motion blur than they tend to on more expensive Samsung sets.

Again, though, some context is required here, since for its money the UE46ES6300’s standard def pictures are by no means below par. Especially as they aren’t as blighted as those of many budget TVs by heavy-duty MPEG compression or mosquito noise.

A final predictable niggle is that the picture’s colour and contrast take a hit if you have to watch from an angle of more than around 30-35 degrees off axis. But this is hardly a rarity in the TV world.

Despite its numerous flaws, the Samsung UE46ES6300 isn’t really a bad performer overall. For instance, joining its successful 3D images are some strong HD colours that look bold but also natural in the set’s post-calibration state. Skin tones generally hold up well, except for where they’re affected by the slightly cool tone noted during dark scenes.

HD pictures look extremely textured and crisp except for when there’s a lot of motion too, and while black level flaws become apparent during dark scenes, where pictures combine both bright and dark material the set’s contrast range actually looks rather good.

It also struck us how well the Samsung UE46ES6300’s screen absorbs reflections from the room, minimising the potential for distractions from such potential viewing aggravations as wall lights and sunlight. 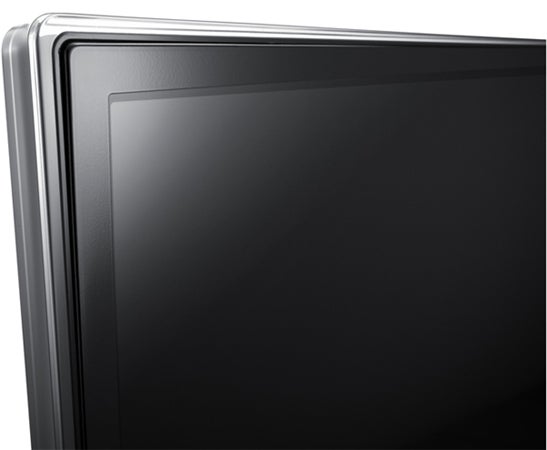 Another bit of mostly good news concerns the Samsung UE46ES6300’s input lag. For while the screen’s issues with dark scenes and slight motion blurring don’t make it a perfect gaming monitor, we measured an average input lag figure of slightly under 40ms, which can be considered low enough to leave your skills intact. Oddly we did record a couple of rogue input lag measurements of around 66ms, but these were certainly the exception rather than the norm.

The Samsung UE46ES6300’s sound is decent enough for the set’s price. The mid-range sounds a bit cramped thanks to a lack of deep bass and a shortage of treble detail, but there’s enough power and openness to deliver a vague sense of soundstage expansion when required by an action scene; voices sound reasonably clear; the soundstage appears engagingly wide; and only very occasionally do the speakers distort or cause the TV’s cabinet to ‘phut’.

The Samsung UE46ES6300 holds its own respectably well against most similarly affordable 46in TVs. Its online and multimedia features are particularly strong for its money, and its pictures have their moments. However, the lack of Samsung’s micro dimming technology does knock picture quality during dark scenes, meaning we’d advise that anyone attracted by Samsung’s Smart technology try and save a couple of hundred pounds more to step up to the micro dimming-equipped UE46ES6800.