Introduction
Hot on the heels of one Samsung TV bargain – the recently reviewed Samsung UE32EH5000 – here’s another. At the time of writing we’ve found the 46-inch Samsung UE46ES5500 on sale for as little as £689. This would be an eye-catching price for a bog-standard, no-frills 46-inch TV, but the Samsung UE46ES5500 boasts a trendily thin design and Samsung’s latest Smart TV online platform.

The question has to be whether Samsung has been able to deliver any serious picture quality to accompany the UE46ES5500’s price and feature attractions.

Looking at the Samsung UE46ES5500 design and it is fair to say that it’s nicer in the ‘flesh’ than it looks in photos. The transparent outer trim contrasts nicely with the glossy black of the main bezel, and the way the trim wraps around the set’s edges is also an unusual but appealing touch. The set’s edges angle slightly back too, increasing the elegant impression. 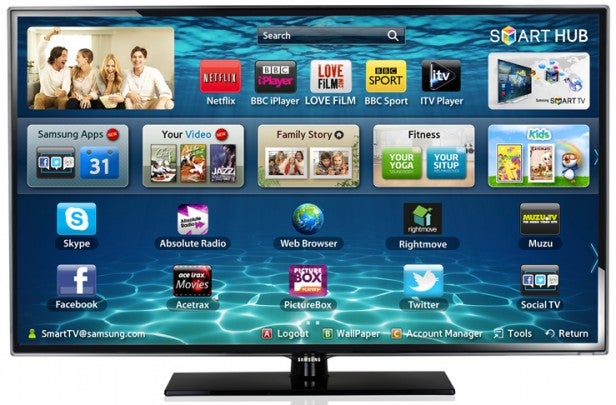 Rather less elegantly designed are the Samsung UE46ES5500’s connections. Surprisingly, many of them stick straight out of the TV’s rear rather than being accessed from the side, making the set a potentially tricky wall-mounting option.

The connections are reasonably plentiful though, delivering highlights of three HDMIs, two USBs, a D-Sub PC input and a LAN port. The set is also Wi-Fi capable, though only if you add an optional USB dongle.

Investigating some of these connections in more detail, it transpires that the HDMIs do not support 3D inputs. For the simple reason that the TV does not support 3D playback. This is the most significant compromise Samsung has made in order to make the UE46ES5500 so affordable.

The USBs, meanwhile, support playback of a mix of photo, video and music files, and can be used for time shifting from the built-in Freeview HD tuner. The LAN is probably the most interesting connection, though, for as well as enabling you to stream multimedia files from a connected DLNA PC, as noted earlier it lets you access the wealth of content contained on Samsung’s latest Smart TV service.

This service has been covered extensively in previous reviews of Samsung’s 2012 TVs, so we hadn’t intended to devote much time to it again here other than stressing just what an attractive and logical HD interface the system uses, and pointing out how content-rich it is. However, as we checked through the service during our tests, we spotted a surprisingly long list of new additions that seemed worthy of coverage.

Curzon on Demand turns out to be a terrific addition to Samsung’s offering. It focuses on arthouse films such as Aki Kourismaki’s Le Havre, Lars Von Trier’s excellent Melancholia, and Holy Motors, with prices starting from £2 and going up to £10 for the latest releases.

Knowhow Movies, meanwhile, claims to deliver the latest films as soon as they come out on DVD, as well as some TV episodes, and carries thousands of titles in HD (accompanied by 5.1 surround on some platforms). Stuff on there when we looked included Wrath of the Titans, Dark Shadows, Snow White and The Huntsman, The Cabin in the Woods, Avengers Assemble, and The Hunger Games, with prices ranging from £3.99 to rent and £12.99 to buy. The interface for this new service is excellent, too.

Moving on to Digital Theatre, this is again an excellent addition to Samsung’s video service offering. It allows you to pay to view filmed performances of a strong range of past theatre productions, such as Simon Stephens’ adaptation of A Doll’s House; the David Tenant Much Ado About Nothing production, and 2009’s critically acclaimed Parlour Song. 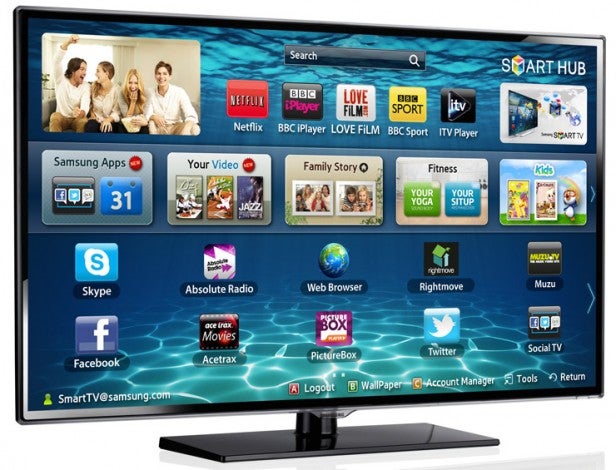 As for the BFI Player, this is a work in progress right now, in that it only currently shows interviews and backgrounders from the recent London Film Festival. But the service is apparently going to provide access to the BFI’s film archive, film lists, recommendations and wider interviews in the months to come.

The Samsung UE46ES5500’s picture features are solid for its money. It uses a full HD edge LED panel, and sports 100Hz processing for sharper, smoother motion reproduction. There’s a reasonable collection of picture adjustments for the set’s price too, including white balance fine tuning, gamma presets, a skin tone adjustment, a multi-level dynamic contrast system, and various noise filters. So far the Samsung UE46ES5500 is looking like a bargain of titanic proportions. And in some ways, at least, its pictures continue this impression.

Samsung has long understood what it takes to make pictures eye-catching, even on its more affordable TVs. So the Samsung UE46ES5500 immediately impresses with the boldness of its colours, its extremely punchy brightness levels, and an apparently strong contrast performance.

HD pictures look reasonably detailed and sharp too – not spectacularly so, perhaps, but enough to make sure you’re always fully aware that you’re watching HD.

After the initial attraction, though, you do start to spot a few cracks. For starters, it becomes apparent that as usual with Samsung, all of the provided picture presets make images too aggressive, with OTT brightness and contrast levels tending to push source noise to the fore as well as reducing colour subtlety and ‘whiting out’ the brightest parts of the picture so that you lose some greyscale information.

Reducing the Samsung UE46ES5500’s backlight to 11 or less and the contrast setting to around its 75-80 level quickly improves things dramatically, though – especially where noise levels and white ‘bleaching’ is concerned.

There are other problems with the Samsung UE46ES5500 that we had less success getting round, though. First and worst, motion looks a little blurry and low on resolution, despite the 100Hz system. This is – as usual with LCD TVs – at its worst whenever you fire the TV up from cold, but even when the screen was warmed up, no amount of playing with any of the provided processing tools got motion looking quite as crisp as we’d like.

This resolution loss with moving objects is the most likely reason why HD sharpness levels are only fair to middling rather than as outstanding as they tend to be with higher-specced Samsung TVs.

Another issue is a lack of subtlety in the Samsung UE46ES5500’s portrayal of skin tones. This leaves faces looking a bit too smooth, so that people can appear slightly robot-like during closeups. We also noticed during dark scenes that skin tones didn’t seem entirely natural. For instance, during dark scenes in the admittedly tricky Prometheus Blu-ray, skin tones tend to look a little orangey or over-pink, despite our best efforts with the provided colour adjustments. 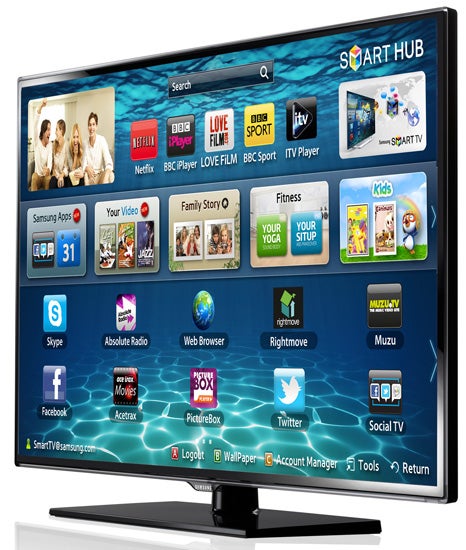 Or actually, the issue might be that dark areas of the picture tend to look slightly cool, even if you use the provided Warm colour presets, so that skin tones seem to exist in a separate colour space.

The final area where the Samsung UE46ES5500 didn’t totally impress was with standard definition sources. It holds up well enough with high quality DVDs and broadcasts, but with rougher broadcasts of the sort all too common with Freeview, pictures tend to look rather soft and noisy, as well as exhibiting a ‘compressed’ colour range.

At this point it occurs to us that we’re sounding pretty down on the Samsung UE46ES5500. Which is actually not fair. So let’s move on to an important redeeming plus point: contrast. We felt consistently impressed by both the depth of black level the Samsung UE46ES5500 can achieve and the uniformity of its lighting. In this latter respect, in particular, this relatively budget model is arguably more successful than Samsung’s (otherwise impressive) flagship TVs.

We noted earlier that there’s a slightly cool, blue undertone to the Samsung UE46ES5500’s presentation of black colours, and the set also has a habit of distractingly turning off the screen’s lighting during fades to black if you’re using the dynamic contrast system. But still, overall the Samsung UE46ES5500’s contrast performance is impressive – a fact which helps it deliver much more all-important shadow detail than we’d generally expect to see on such a cheap TV. 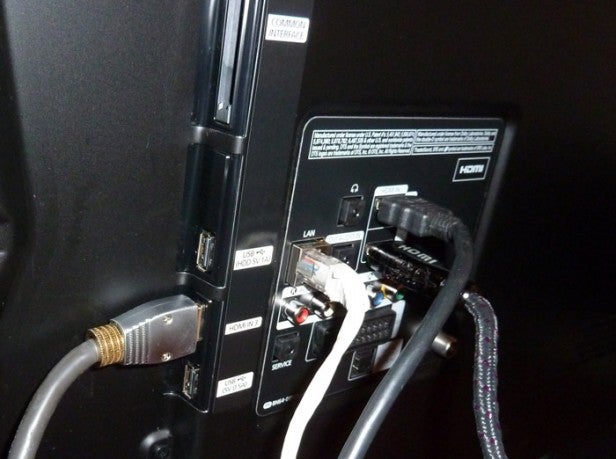 There’s one more bit of positive picture-related news to report as well. For our measurements recorded an image input lag figure of under 35ms when using the Samsung UE46ES5500’s Game picture preset with all noise reduction elements deactivated. This is a strong result that means gamers can’t blame the TV if they’re performing badly.

The Samsung UE46ES5500‘s sound is better than expected too. It’s capable of quite high volume levels without becoming excessively distorted or uncontrolled. There’s also a solid amount of bass; trebles are a little harsh but not excessively so; and voices remain clear even during action scenes. The mid-range sounds a bit overloaded in loud sequences, causing detail and clarity to take a hit, and bass sometimes appears slightly forced. But it’s a fair effort overall.

When push comes to shove there are just enough issues with the Samsung UE46ES5500’s pictures to stop us giving it a Trusted Recommends badge. But it’s still a cracking option for anyone with a maximum budget of £700 who didn’t expect they’d be able to combine very respectable 46-inch pictures with an advanced Smart TV service for so little money.