Our first reaction on taking the Samsung UE46EH5300 out of its box was that we must have got the wrong TV. The thing is, Samsung TVs are traditionally glamorous, right? Slim, trim, beautifully finished trendsetters? Yet the UE46EH5300 is about as far from all those things as it’s possible to get.

The depth of its rear end is particularly startling, sticking out a cool 94.3mm without the stand. This makes it the deepest TV we can remember seeing since the old – and extremely cheap – Cello C42T71DVB back in September 2011.

Plastic not so fantastic
Its bezel is reasonably normal in its width too – certainly it’s much wider than the ‘barely there’ frames wrapped impossibly around Samsung’s ES7000 and ES8000 TVs. And finally its finish is, not to put too fine a point on it, pretty darned cheap. The set is far lighter than such a large telly ought to be, and so feels like there’s absolutely nothing in its construction that isn’t fairly low-grade plastic. 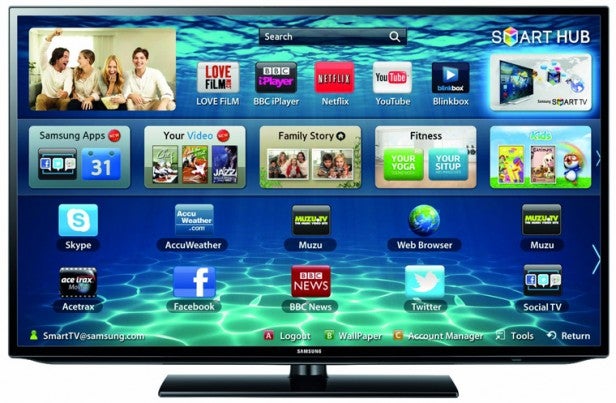 Not surprisingly such a chunky TV is not something you would sensibly consider hanging on the wall. As if to underline this, Samsung has positioned most of the set’s connections so that they face directly out of the TV’s rear rather than being accessible from the edge.

Connections
The connections are at least passably plentiful, including as they do three HDMIs, two USBs, a LAN port and Wi-Fi via an optional extra USB dongle. The LAN/Wi-Fi and USBs are also more flexible than might have been expected given that the Samsung UE46EH5300 appears up to this point to designed with price rather than features in mind. The USBs play photo, music and video files from USB storage devices, while the LAN/Wi-Fi options can handle files streamed from DLNA computers or even let you go online with Samsung’s latest Smart TV platform.

This turns out to be a full version of Smart TV, complete with the same extremely pretty onscreen menus, a web browser, and the same huge raft of content apps ranging from video streaming services  to games, infotainment and social networking (including Skype if you get an optional extra camera). 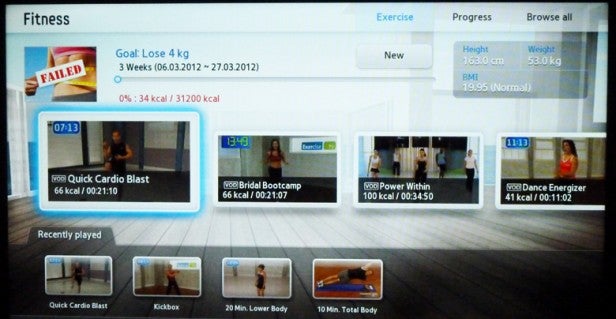 We’ve covered Samsung’s 2012 Smart TV service in some depth in previous reviews, so here we’ll just list the highlights. Which are: a new Family Zone that lets you set up a private network with friends and family for sharing messages and photos; a Fitness Zone featuring lots of fitness videos and a profile for charting your progress; LoveFilm; Acetrax; Netflix; the BBC iPlayer; and BBC Sport.

No innovative controls here
Please note that the UE46EH5300’s Smart TV service does not benefit from any of the interface innovations found on Samsung’s top-end sets. There’s no gesture control, voice control, or touchpad remote handset. But the ordinary remote isn’t a bad design anyway, and we suspect some people won’t feel bothered at all by not having the option to talk or wave at their TV…

The Samsung UE46EH5300 screen is, as we’d expect of any 46in TV these days, a full HD affair. More surprising is the display’s use of edge LED lighting rather than the standard CCFL lighting we’d frankly been expecting to find from the moment we clocked the set’s chunky rear end. The picture engine, meanwhile, is relatively low level by Samsung’s standards, offering a fairly straightforward 100Hz system together with Samsung’s Wide Colour Enhancer Plus system and digital noise reduction.

No 3D
Not surprisingly given that it sits in the lower half of Samsung’s current range, the UE46EH5300 does not support 3D playback. 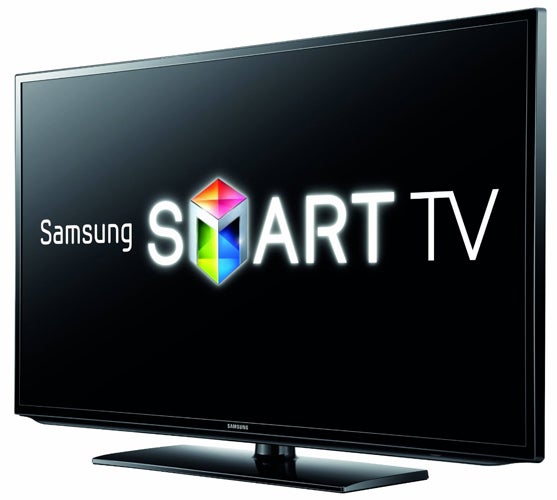 Unleashed on a few of our favourite Blu-rays, the Samsung UE46H5300 gives an overall good but certainly not perfect account of itself. Starting with the good news, it looks great with bright scenes. Brightness levels from the screen are high, yet they’re also controlled, avoiding the tendency for the brightest areas to ‘flare out’ like they can on some budget TVs.

Colour
Also good is the general colour response. Skin tones look impressive straight out of the box (even without touching a provided skin tone adjustment), despite richer content such as onscreen graphics or animated films also looking vibrant and bold. The underlying colour temperature is well suited to video content too, avoiding the PC flavour that infiltrates video viewing on many relatively affordable flat TVs.

It was interesting to see, too, that the chunky Samsung UE46EH5300 displays a more neutral tone with black colours than you tend to get with Samsung’s ultra-thin TVs. By which we mean that you don’t get the slight infusion of blue that sneaks into the ultra-thin models unless you reduce their backlight output to as low as 4-6 (out of 20). 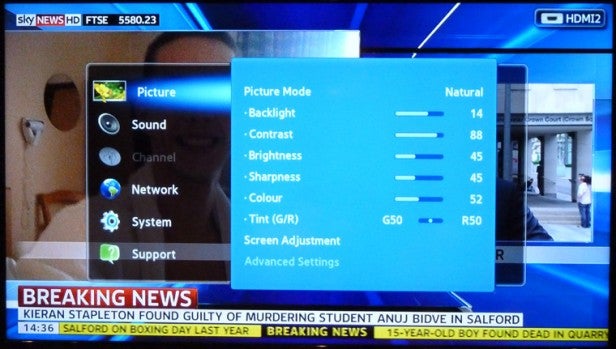 Similarly the extra rear and edge size of the UE46EH5300 helps it avoid almost completely the backlight consistency issues during dark scenes that plague the ES7000 and ES8000 models (unless, again, you ramp the backlight settings on these high-end TVs way down from any of their preset levels). What this means is that even with the backlight set quite high, to around its 14 level, the UE46EH5300’s images appear to be very evenly illuminated, with no patches of extra clouding to distract you.

The Samsung UE46EH5300’s HD detail levels are fairly strong for a 46in TV available for as little as £629.03 too, leaving you in no doubt at all that you’re watching a Blu-ray rather than a standard definition DVD.

There is, it must be said, a noticeable reduction in sharpness levels where there’s motion in the picture, proving the worth of the higher-level motion processing found on Samsung’s higher-spec TVs. But at the same time the ‘blurring’ is not nearly as bad as it often can be on other sets at the UE46EH5300’s relatively affordable price level.

Black levels
Turning to the areas where the Samsung UE46EH5300 struggles a bit, while its backlight is pleasingly even, it isn’t capable of producing particularly fulfilling black level depths. Depending on how you set the backlight and contrast levels, you either get a noticeable grey pall hanging over very dark sequences, or else you have a rather muted picture that’s very low on shadow detail. 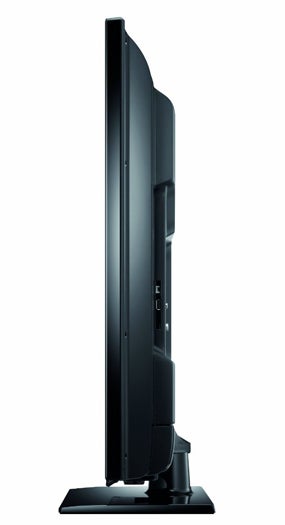 Your best bet is to try and strike some sort of compromise between blacks that look reasonably black and dark corners that contain at least a bit of detailing. Despite our best efforts, though, we never managed to hit on a completely satisfying balance.

Standard definition
The UE46EH5300 also proves a slightly average standard definition performer. Upscaled images look a touch soft, and colour tones slide a little with low-quality sources too, with greens in particular starting to look strained and over-dominant. That said, there’s nothing going on that actually makes standard def images in any way unacceptable.

One final picture flaw that might affect some living room set ups is the UE46EH5300’s limited viewing angle, which finds colour and, especially, contrast reducing considerably if you have to watch from anything more than around 30 degrees off axis. 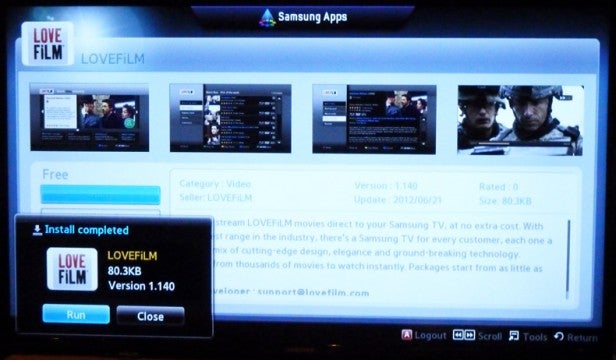 If you’re a gamer, the Samsung UE46EH5300 is a potentially decent option, thanks to a very respectable input lag figure of just 35ms. Just make sure in order to get this result that you track down the set’s Game preset and make sure all noise reduction circuitry is turned off.

Sonically the UE46EH5300 is a bit disappointing. We’d hoped that the set’s bulk might have been used to integrate some meaty, full-range speakers, but there’s no great amount of power to be heard, and action scenes struggle to spring into life. On the upside, though, the sound isn’t as harsh as it often is on slimmer models, and there’s seldom much in the way of distortion.

Verdict
While its shortcomings with dark scenes might stop the Samsung UE46EH5300 from being a particularly great option for serious movie fans, it certainly ticks plenty of boxes if you’re looking for a highly affordable 46in TV for relatively casual viewing that also delivers an extensive suite of Smart TV functionality.