If we were in the business of dishing out awards purely for looks,
Samsung’s D8000 range of LCD TVs would have a whole series of glittering
trophies in its cabinet. Or sat next to its toilet, depending on the
how important it might deem such awards to be.

The UE46D8000 sat
on our test benches today is for our money the single most attractive
46in TV we’ve seen. There are more ‘out there’ designs from the likes of
Loewe and Bang & Olufsen, but the way the UE46D8000 manages to
deliver its considerable screen acreage from a bezel so narrow that it’s
barely there is guaranteed to inspire telly envy in all who behold it.

After
all, as well as allowing the UE46D8000 to fit in a smaller space and
making it a less daunting a presence than your average 46in TV, the
minuscule metallic bezel also practically screams ‘cutting edge tech’ at
you. Which means that it achieves the extraordinary feat of being
irresistible to tech haters and gadget lovers alike. 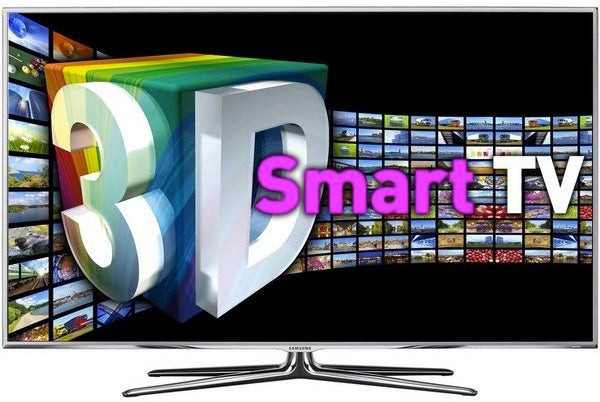 It’s
not just its design that makes the UE46D8000 Samsung’s flagship 46in
LCD TV, though. It’s also managed to squeeze more features into its
impossibly tiny frame than you would have thought possible.

Its
connections, for instance, include four 3D-friendly v1.4 HDMIs, a LAN
port, built-in Wi-Fi, and no less than three USBs. What’s more, since
wi-fi is built in, you don’t need to ‘waste’ one of the USB ports with
an external USB wi-fi dongle.

What you probably will want to use
the USB ports for is both playing back multimedia files – including a
variety of video formats – from USB drives, and recording from the
built-in Freeview HD and Freesat HD tuners to USB HDDs. 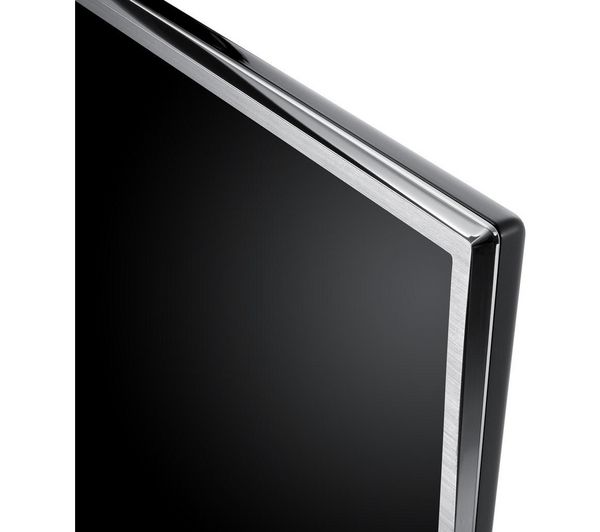 We’ve covered this service extensively in other recent Samsung reviews,
so there doesn’t seem much point doing it again here. All that’s worth
reiterating is that the platform currently leads the way in terms of
both its interface and the sheer wealth of content available. Video
services include – among many other things – LoveFilm, the BBC iPlayer,
and Samsung’s own ‘vault’ of downstream-able 3D sources, plus you get
Skype, Facebook and Twitter for social networking.

Our only
complaint would be that Samsung seems to be adopting a quantity over
quality approach to its lower-level apps, presenting you with such a
bewildering swathe of largely rubbish games and infotainment fluff that
many people probably won’t have the time or inclination to sort the
wheat from the chaff.

As with many Samsung TVs that have come our way this year, the UE46D8000’s out of the box picture settings are pretty ‘out there’; far too bright, contrast-rich and colour-heavy. This makes them eye-catching, certainly, but it also exaggerates source noise, makes colours look unbalanced, and worst of all causes some pretty obvious backlight consistency problems during dark scenes.

Thankfully, although it’s not endorsed by the Imaging Science Foundation (ISF), the UE46D8000 is packed with enough picture calibration tools to put things right. At the very least you should make sure you set the backlight down to its 12-13 (out of 20) setting, and get the contrast down to around its ’80’ (out of 100) setting. But we’d also recommend that you tinker with the set’s white balance and especially colour management tools if you really want to start to see the sort of subtlety the UE46D8000 is capable of as well as its more obvious dynamism. 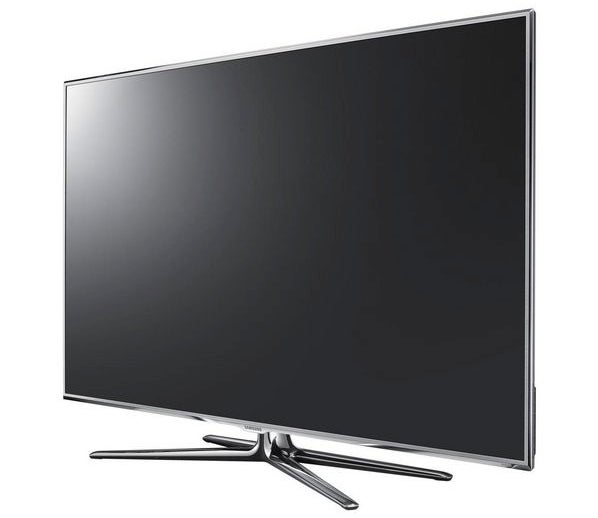 The UE46D8000’s high position in Samsung’s range means, of course, that it’s equipped with 3D. And this being Samsung rather than its Korean rival LG, this 3D is of the full HD active variety, with a single pair of active shutter glasses included in the box. You also get what is currently for our money the mainstream TV world’s best 2D to 3D conversion processing.

The UE46D8000’s 3D pictures additionally stand out from most other active 3D sets with their brightness and colour richness. Not because Samsung’s Bluetooth-fed 3D glasses knock less brightness out of the picture than most, but because the edge LED lighting system that drives the set is capable of pumping out pretty extraordinary levels of vibrancy considering how little physical bodywork there is to play with.

The catch with the UE46D8000’s 3D performance shows up during dark scenes. For it’s here that crosstalk ghosting noise appears fairly routinely. And as ever, when it does appear it distracts you from what you’re watching and gives the impression that the picture is slightly out of focus. 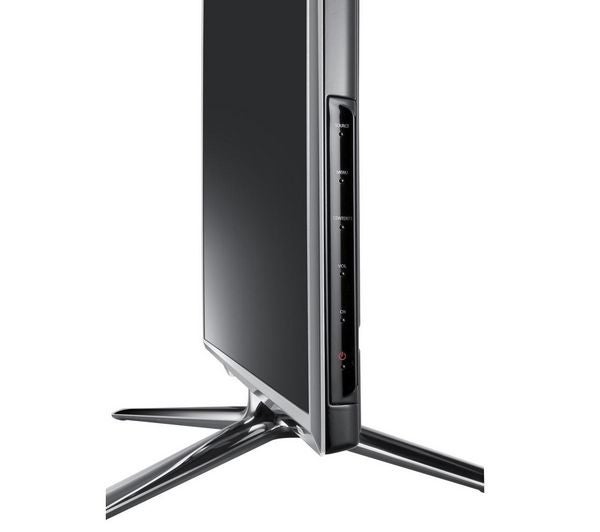 This is all the more unfortunate because actually, when crosstalk isn’t around (which is the case, thankfully, during almost all bright and colourful scenes, and even during dark scenes if they don’t contain any small, bright elements) the UE46D8000’s HD 3D pictures look unusually crisp and detailed.

With 2D, provided you follow the simple setup advice mentioned earlier, there are really no major negatives to report. In fact, its 2D pictures are consistently brilliant.

The extreme brightness and colour response noted during 3D viewing is even more startling with 2D. In fact, the aggression of the UE46D8000’s pictures is actually too intense if you don’t tame the picture presets.

But the fact is that the UE46D8000 is amply capable of producing realistic and subtle colours, as well as very well considered levels of brightness if you don’t mind putting a little work in to get things to where they need to be. And actually, we’d much rather be in a position of calibrating ‘down’ from extreme brightness and colour saturation levels than trying to force colour and brightness into a picture that doesn’t innately have them.

All this talk of brightness and rich colours would be horribly undermined, of course, if pictures didn’t also enjoy a decent contrast performance. But actually the UE46D8000’s contrast performance is far more than decent; it’s outstanding by edge LED standards. With the backlight level set to a sensible level, black picture elements are barely affected at all by the sort of grey ‘wash’ still common to some extent on flat TVs. Even better, although there is inevitably some backlight clouding, in our opinion it’s low level, and so counts as a small price to pay for the strengths so abundantly evident elsewhere. 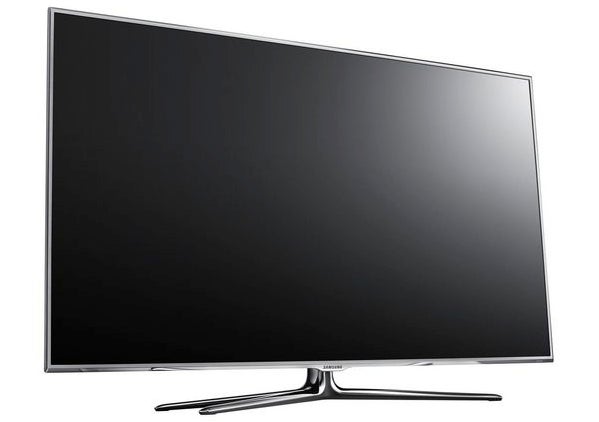 HD pictures on the UE46D8000 are boosted further by the set’s intense sharpness, which delineates the advantages of HD over standard definition with a relish seldom seen before. What’s more, this sharpness remains more or less intact when images contain lots of motion, even if you don’t use Samsung’s provided motion processing tools. In fact, we personally wouldn’t recommend that you do use the motion processing unless, perhaps, you go for its lowest-power ‘Clear’ mode.

Don’t think from our mention of how strongly the UE46D8000 renders the HD advantage that the set isn’t accomplished with standard definition. On the contrary, its upscaling engine is possibly the best in the mainstream TV world right now, thanks to the way it manages to add sharpness and detail to standard definition images while simultaneously reducing source noise.

If you’re a gamer, meanwhile, you’ll be interested to hear that we measured input lag on the UE46D8000 to be a shade under 35ms using the set’s Game mode – a respectable if not outstanding result that shouldn’t cause typical gamers any consistent problems.

Joining the UE46D8000’s often sensational pictures is a passable audio performance. There’s a reasonably open mid-range, and good levels of treble clarity. But bass is negligible, and during loud action scenes the soundstage quickly starts to sound compressed. But really it’s hard to see how Samsung could have done much more with so little physical bodywork to work with.

Verdict
While the UE46D8000 isn’t without its problems – its 3D crosstalk, its average sonics, its minor backlight inconsistencies, its over-aggressive presets and the fact that it costs £100 than the identically specified but slightly less glamorous looking UE46D7000 – it’s still a genuine design classic and, more importantly, it’s a joy to watch for the vast majority of your viewing time.