While we wait impatiently for Samsung’s second generation of 3D TVs, let’s tide ourselves over with what’s unquestionably one of the most glamorous and iconic TVs of this AV generation: Samsung’s UE46C9000. The fact that we organised Samsung’s flagship 46in LED TV to arrive just before Christmas, so that it was there to make any visitors who popped round come over all unnecessary and jealous, was just a happy bonus, obviously. 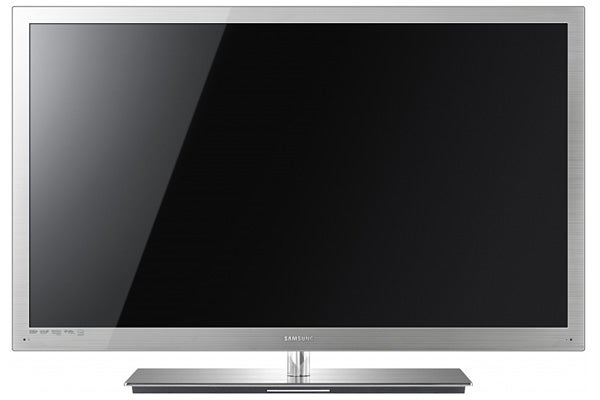 Funnily enough, though, this pathetically shallow attempt to make friends and influence people simply by having a fancy TV around slightly backfired – at least as far as Samsung was concerned. For while we’d expected the UE46C9000 to deliver the same sort of futuristic allure as the 55in version of the set that we tested a few months back, actually, it fell just a touch flat.


Initially it’s hard to figure out why this might be so. After all, the UE46C9000 is still just as impossibly thin as its bigger brother, achieving a depth over most of its rear of a smidge under 8mm. And yes, that really is mm, not cm.


The UE46C9000 also shares the same gorgeous metallic bezel as the UE55C9000, and still has its screen beautifully attached to a stunningly well-built brushed aluminium desktop stand.


What’s more, only having a 46in screen doesn’t make the UE46C9000 seem as completely out of most people’s reach and experience as the 55in model. So when all’s said and done, while the UE46C9000 is undoubtedly gorgeous, it seems neither quite as mind-boggling in technical terms or as fiendishly aspirational as the bigger version. 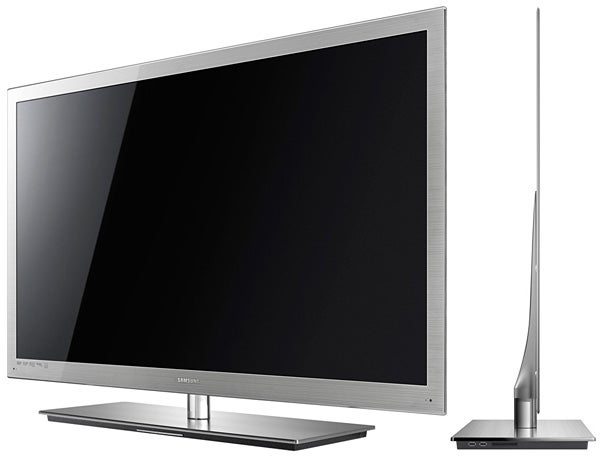 Why does this matter so much? Because the UE46C9000 costs £3,200. This is a truly princely sum for a 46in TV, even one with 3D playback and extensive multimedia talents (which we’ll get into later). So the moment it fails to dazzle and stand out from the crowd quite as much as the UE55C9000, it fails to justify its extravagant cost as successfully. As a result, unlike the (seemingly controversial!) 9 out of 10 we awarded the UE55C9000 partly on account of its iconic design achievements, the UE46C9000 only bags an 8.

This does not mean, however, that the UE46C9000 isn’t in many ways a very good TV. For instance, its gorgeously chiselled stand still cleverly delivers a strikingly good roster of connections the impossibly thin screen simply doesn’t have enough room to carry itself. These include four v1.4 HDMIs (able to carry the alternate-frame/active 3D format), a LAN socket, a pair of USBs, and a D-Sub PC port. 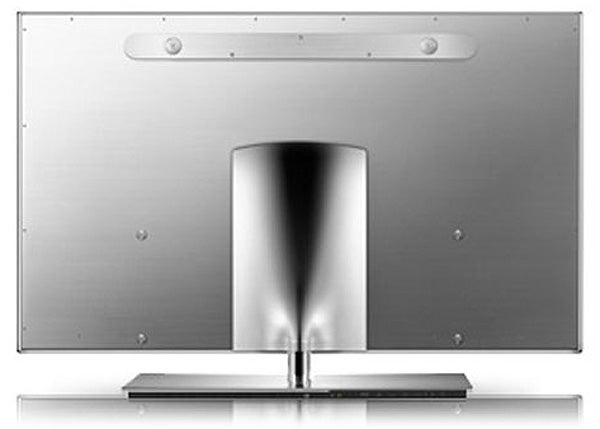 The quantity of multimedia functionality delivered by these connections is terrific. The majority of current photo, music and video file formats are playable via the USBs or from DLNA PCs via the LAN socket or Wi-Fi if you make use of the supplied USB Wi-Fi dongle. You can also record programmes from the TV’s integrated Freeview HD tuner to suitably large USB drives, and perhaps most notably of all, access Samsung’s Internet@TV online service.


This ring-fenced affair is a little hamstrung by its slightly cumbersome interface, but it’s very strong on the content front. Highlights include LoveFilm, the BBC iPlayer, Twitter, Facebook, YouTube and Picasa. Its distinctly ‘app’-like approach to online content is interesting too, though a little more quality control needs to be applied to the sort of apps the system plays host to.


Samsung continues to miss a trick even on a TV as premium as the UE46C9000 by not pursuing any endorsement from the likes of THX or the Imaging Science Foundation (ISF). But aside from not having as much colour management as it ideally should, it does have a pretty extensive suite of picture adjustments, including gamma control and the much-appreciated facility to adjust both the potency and emphasis of the set’s Motion Plus video processing.


The UE46C9000 additionally has a stab at delivering a next-gen remote control. But unfortunately, while this touch-screen, full-colour remote looks like a vision of the future, it’s actually extremely unintuitive to use, and ends up feeling like a real barrier to day to day use of the TV. Just as well Samsung has chucked in a much simpler, ultra-minimal ‘pebble’ style remote as well! 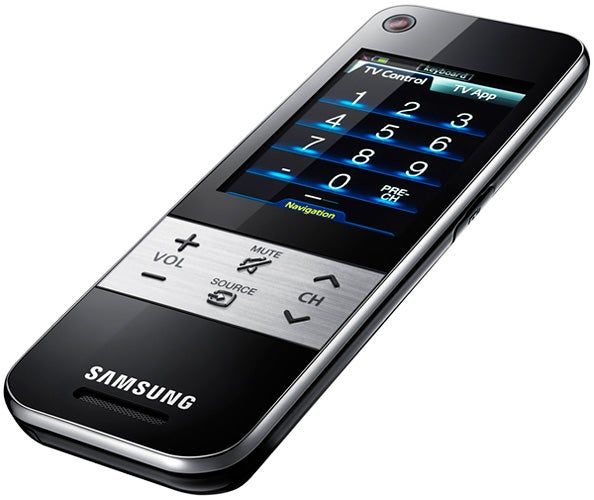 At first glance, the UE46C9000’s pictures look spectacularly good – almost impossibly good given the ridiculously slender chassis that’s producing them. They’re extremely bright, really vibrantly coloured, and extremely sharp and detailed. In other words, they couldn’t really try any harder to deliver the sort of aggression that will help them stand out in a store environment, and help grab and hold your attention once you get one home.

It doesn’t do any harm whatsoever to the UE46C9000’s instant picture appeal, either, that it upscales standard definition pictures unusually well (adding detail without emphasising noise) and handles motion excellently, reducing judder and blurring without leaving the picture looking unduly processed. 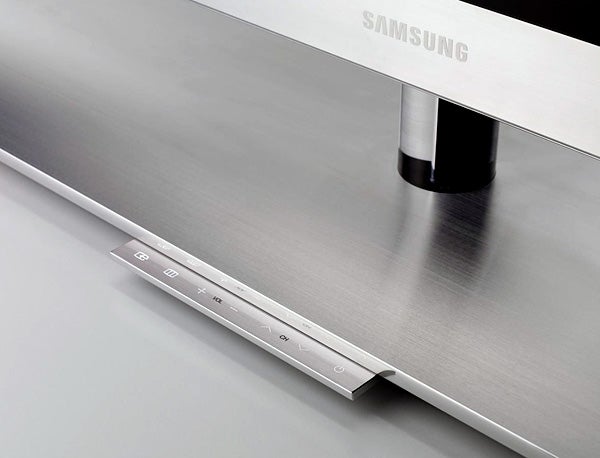 Also striking is how rich and bright the UE46C9000’s 3D pictures look, especially when considered against the relatively drab 3D pictures of the Panasonic plasmas we usually champion on this site.


However, the reason we still pick the Panasonic 3D plasmas over the UE46C9000 as 3D displays is that the Samsung model suffers really quite obviously with crosstalk noise: that endlessly distracting flaw whereby you see obvious ghosting around some objects in 3D pictures – especially those in the mid or far distance. If anything, the aggression of the UE46C9000’s picture merely exaggerates the crosstalk, making us recall fondly how enjoyable it is to see so little crosstalk on the 3D plasma TVs we’ve tested.


It’s worth adding while talking about 3D, too, that the UE46C9000’s smallness compared with its 55in brother also reduces the impact of your 3D viewing.


The UE46C9000’s bold presentation hides another aggravating picture weakness. For while dark scenes look pretty good with your 3D glasses on, with 2D footage it’s noticeable that the screen’s black levels really aren’t all that impressive. There’s a distinctly milky look to parts of the picture that should look black. Furthermore, in keeping with alarmingly many edge LED TVs we’ve seen of late, you can see during dark scenes subtle but still easily identifiable areas of backlight inconsistency, where some parts of the picture are brighter than others. This problem only appears during very dark scenes, but that still makes it a reasonably regular distraction.


Thankfully the UE46C9000 is rather more successful sonically. For rather than the thin, feeble, bass-free sound you might have expected from a phenomenally slender TV, you get a surprisingly loud, dynamic, wide-ranging audio performance that really proves the worth of building the speakers into the stand rather than attempting to accommodate them in the screen.

While the UE46C9000 is unfeasibly glamorous, generously featured and capable of producing occasionally spectacular pictures, its 3D and black level shortcomings are impossible to ignore on a 46in TV costing north of three grand. Especially when the sheer spectacle of the TV falls short of the showboating grandeur of its larger sibling.