The UE42F5000 is a 42-inch LCD TV from the relatively low reaches of Samsung’s current TV range (only the 4 series sit below it). It still manages a 100Hz edge LED picture system for its staggeringly cheap £399 price tag, but you don’t get 3D or access to Samsung’s online Smart TV experience. But if you’re not too fussed about either then this could be the bargain TV you’ve been looking for. 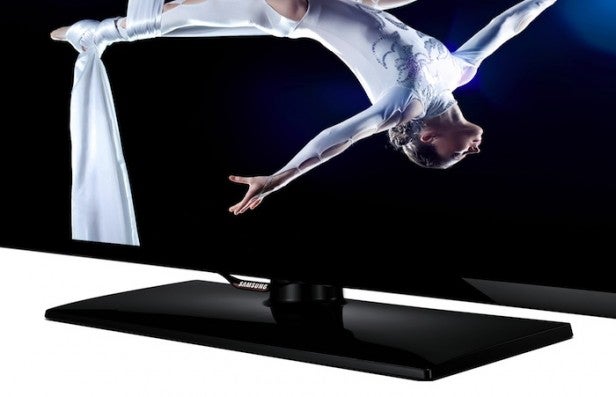 The first thing we noticed about the Samsung UE42F5000 is how incredibly light it is. Its measly 8.7kg weight makes many portable screens feel lardy, in fact – though this also raises concerns about its build quality, both outside and in.

Where the exterior is concerned, though, while you wouldn’t exactly want to run over your UE42F5000 in a tank it doesn’t feel too creaky or snappable, and the extreme glossiness of the black finish applied to its bezel does an effective if hardly original job of disguising the chassis’ inherent plastickiness.

The bezel is a bit wider than many of Samsung’s more expensive TVs, but having said that it’s also trimmer than the chunky frames slapped around the majority of rival ultra-cheap TVs.

It’s worth reflecting briefly, too, that the Samsung UE42F5000 is the first ever 42-inch LCD screen we’ve seen from Samsung, shifting up a couple of inches from the 40-inch screens Samsung’s gone for before.

Connectivity (unsurprisingly) falls some way short of the numbers found higher up Samsung’s range. There are two HDMIs rather than the four you’d get if you spent more, there’s only one USB input rather than two or three, and most importantly of all there’s no built-in Wi-Fi and the provided LAN port is there only to support the built-in Freeview HD tuner and playback of photo, video or music files stored on a networked device. The LAN port does not, in other words, take you online with Samsung’s impressive Smart TV engine.

Not surprisingly in light of this discovery, the Samsung UE42F5000 also doesn’t sport Samsung’s multi-screen Smart Hub interface. Hit the Smart Hub button on the UE42F5000’s remote and you just get a screen asking you if you want to look for photos, music or video files on your networked DLNA-capable computers.

While it’s lacking in smarts, though, the Samsung UE42F5000 isn’t the totally stripped-down affair you might expect for just £400. Its edge-LED pictures muster a 100Hz playback system to reduce judder when showing 50Hz images, while the picture setting options available to you include a flesh tone adjustment, multiple settings for a dynamic contrast system, white balance adjustments, noise reduction tools, and an LED Clear Motion tool that adjusts the backlight to make motion-packed images look clearer.

There’s no proper colour management, though, and nor is there any 3D support. Even though our review sample, curiously, came with two pairs of 3D glasses! 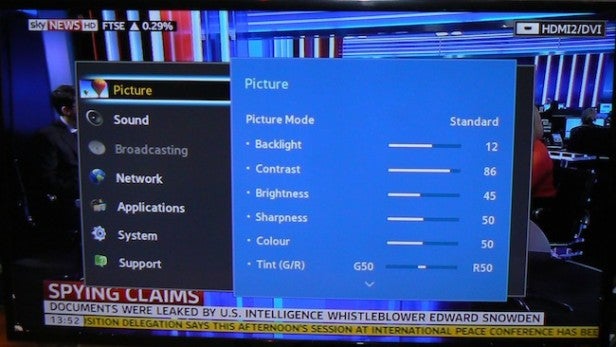 There are a few simple rules worth following if you want to get the best from this TV. First, counterintuitively given our usual preoccupations, we’d say avoid the Movie picture preset. It over-softens pictures and mutes their colour palette to quite an uncomfortable degree so far as we’re concerned.

At the other end of the spectrum we’d say you should avoid the Dynamic and Natural picture presets too, as these stretch the colour palette too far and tend to exaggerate source noise due to their extreme brightness.

Your best preset starting point so far as we’re concerned is the Standard mode – though actually, we’d suggest you calibrate two of the four presets, using one for ‘normal’ daytime TV viewing and one for serious ‘lights down’ movie viewing.

For normal daytime viewing we found we got the most natural results by setting the backlight to between 12 and 14, the dynamic contrast feature to medium, the two noise reduction systems to low, and the contrast to around 85.

For serious HD movie viewing you need to slash the backlight down to as low as 7 or 8 to get the best balance between black level depth and shadow detail; nudge the contrast down to around 82; and turn off all the noise reduction systems to make sure you get the maximum benefit from your HD source. We also found we had to play a little with the red and green colour settings in the White Balance fine-tuning area to minimise a slight yellow bias in the default settings.