Properly set up, the UE40H5500 delivers pictures that are stupidly good for such a cheap TV.

The most startling thing about them is their contrast. Using the out-of-the-box settings, dark areas can look a bit grey – though nowhere near as bad as the greyness you get with TVs that use IPS-type panels, rather than the VA one inside the UE40H5500. But after just a little tweaking the set produces black colours so deep and convincing they wouldn’t disgrace a TV costing at least twice as much.

By the time you’ve adjusted to the backlight level that delivers the best balance between deep blacks and decent shadow detailing, the screen is also almost completely free of backlight clouding and inconsistencies of the sort that are common among budget TVs. 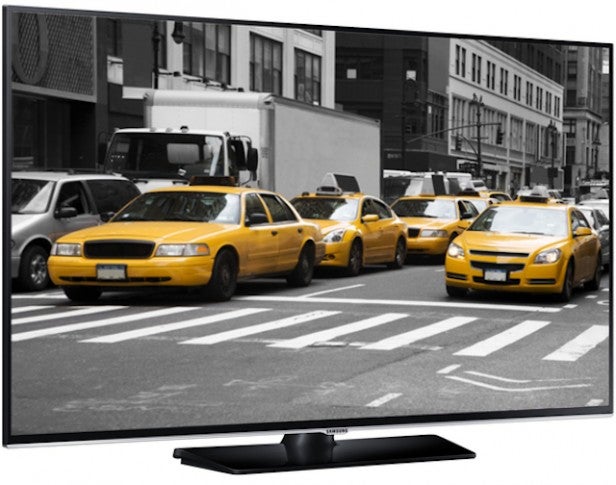 There really is no overstating how important to a TV’s picture quality it is being able to reproduce a believable blacks. So it’s a huge relief to find a TV so affordable able to handle dark scenes so credibly – especially in a year where poor contrast has been a troublingly common phenomenon with affordable (and a few not so affordable!) TVs.

It must be said that you do have to take quite a lot of brightness out of pictures to get the sort of black levels that suit a typical high-contrast film. But this isn’t a serious issue in a fairly dark room, and if you’ve got a lot of ambient light to contend with, just reintroduce more backlight, as the chances are that the brightness of your surroundings will mean you won’t be able to see any backlight clouding that may start to sneak through.

The key point about the UE40H5500, in other words, is that it’s flexible enough to cope with both bright and dark/casual and serious viewing conditions – a multi-tasking talent seldom seen at the sub-£400 price level.

TVs with strong black-level performances usually also enjoy natural, rich colours, and so it proves with the UE40H5500. Its palette is reasonably dynamic and expressive, and best of all colour tones nearly always manage to look balanced and natural, even during dark scenes. This is another key way in which the UE40H5500 humbles most budget competition.

Its pictures are sharper than those of most budget TVs, too. HD pictures look extremely detailed and crisp, and the set is an above-average upscaler of standard definition. Actually, as noted earlier, you have to calm the set’s sharpness down a bit from its preset values to stop images looking so sharp that they tip over into noise.

Inevitably the UE40H5500 can’t totally dodge its budget nature. As well as the shortage of shadow detail you sometimes see when the black levels are calibrated, you can also clearly see a reduction in the picture’s sharpness when showing motion. It’s not as bad as it often is on budget TVs, though. Plus, in a common Samsung failing, areas of very fine detail can shimmer and glimmer slightly, especially if they’re moving.

Finally, the UE40H5500’s VA panel delivers a slightly more limited viewing angle than rival IPS-type panels. But the difference is much smaller than it used to be, and so feels like a small price to pay for VA’s far better contrast.

Used as the main TV for the review period
Tested for more than a week
Tested using industry calibrated tools, discs and with real world use
Tested with broadcast content (HD/SD), video streams and demo discs
Previous
Samsung UE40H5500 Review Next
Sound Quality and Verdict Review