Although we’ve looked at other sizes in Samsung’s ES7000 TV range already, the arrival of the 40in UE40ES7000 this late in the year has really piqued our interest. For it gives us the opportunity to look at this high-end set in the context of a season’s worth of TVs from all the rival AV brands – a process that’s usually quite difficult to do with Samsung TVs as they tend to be the first out of the traps every year.

Aesthetically the UE40ES7000 still looks lovely, despite the appearance of strong aesthetic challengers from LG and Panasonic. Admittedly its dark frame isn’t as stand-out cool as the metallic bezel on Samsung’s flagship ES8000 models, but it still makes an impact on account of its slimness, its glass-like finish and its semi-translucent border. The only aesthetic bumnote is that the illuminated Samsung logo under the screen can look distractingly bright when you’re watching dark scenes.

The most interesting feature of the UE40ES8000’s design is its built in camera, which juts out of the TV’s top edge. When we first saw this it felt like a natural extension of a TV’s functionality given the increasing use of Skype in people’s living rooms. Plus, of course, it’s essential to the use of Samsung’s new gesture control system.

However, over time it’s become clear that people aren’t comfortable with the idea of a webcam constantly looking into their room, so this once-cool feature is perhaps looking in retrospect like an innovation too far. 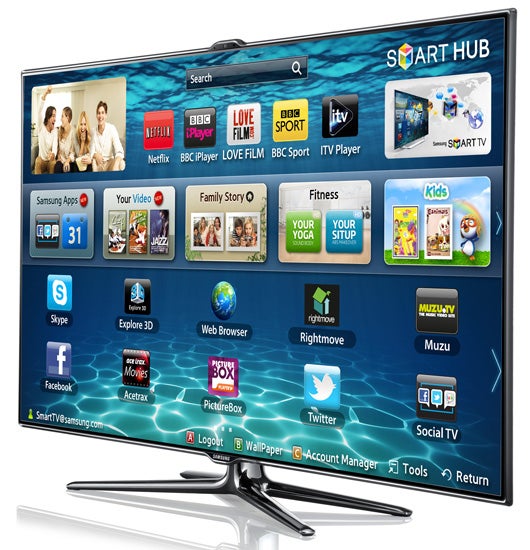 The UE40ES7000’s connectivity, meanwhile, is also looking a little outgunned now. All is well so far as multimedia uses are concerned, thanks to its three USBs (which can be used for recording from the built-in Freeview and Freesat HD tuners), built-in Wi-Fi and LAN networking port. But providing only three HDMIs feels a bit stingy on such a high-end set. Especially when you consider that some recent Philips TVs provide five.

The UE40ES7000’s multimedia file compatibility is still up there with the best, though, and its Smart TV online platform remains arguably the best in the business. Nobody has yet attempted to deliver anything to rival Samsung’s family network and fitness zones, and only LG has an interface as attractive and useful as Samsung’s Smart Hub.

Samsung’s Smart TV platform is also the most fulsomely populated, with literally hundreds of apps to explore. What’s more, while it’s still true that an unhealthy percentage of the available apps are so trivial and/or niche that they’re more or less pointless, Samsung has certainly been busy recently adding to its video streaming proposition – the sort of smart TV resources we actually find ourselves using.

We mentioned the set’s gesture control technology earlier, and it’s fair
to say the passage of time hasn’t made this feature any more appealing
than it was initially. The system still feels frustratingly imprecise,
and it now seems clearer than ever to us that we just don’t feel
comfortable with waving our hands and arms at a TV.


The set’s voice control system is more useful, up to a point. Again,
perhaps because of our good old British reserve, we don’t really feel
comfortable barking orders at our TV. But we have found the set’s voice
recognition tools useful for inputting text into Internet search fields,
where typing words in via the remote control would have been a
nightmare. 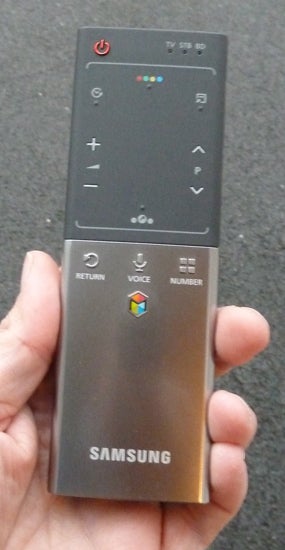 The touchpad remote control Samsung ships with the UE40ES7000 alongside a
‘normal’ handset is probably the best of the touchpad remotes we’ve
seen this year. At least its pad is large and reasonably sensitive.
Having to press the pad in to select an option still aggravates given
the potential for accidentally moving the cursor as you press, but
otherwise it’s a pretty reasonable stab at improving the experience of
browsing the Web on your TV. Assuming you actually want to browse the
web on your TV, which frankly we don’t.


Being able to control TVs via second devices like phones and tablets has
become a big deal in 2012, and to some extent the UE40ES7000 scores
well here, with control apps available for both Android and iOS devices.
However, you can only share what your TV screen is showing with Android
devices, not iOS ones. This is obviously a decision inspired by
Samsung’s own Android self-interest, but it’s hard to stomach when other
TV brands like Panasonic are largely platform neutral with their app
development. 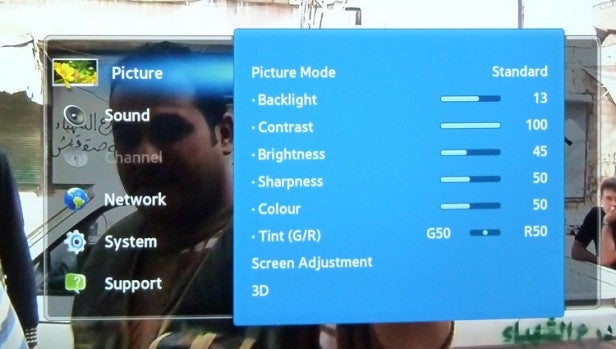 Settling down to watch the UE40ES7000 provides a swift reminder of
Samsung’s biggest mistake this year: poor picture presets. All of the
provided options leave the backlight and contrast settings too high,
resulting in over-ripe colours, exaggerated noise and some overt
backlight inconsistencies, where the screen’s edge LED lighting system
fails to illuminate the whole screen evenly.


Thankfully you can largely eradicate this problem – which is only
evident during very dark scenes – by reducing the backlight setting to
around level 8 on Samsung’s (rather limited) scale. You can even go
lower if you’re in a dark room. We’d strongly recommend, too, nudging
the contrast down to around 80 from its 100 starting point.


Also worth dealing with is the TV’s irritating – though hardly unique –
tendency to leave its noise reduction systems switched on even when
you’re feeding in an HD source, and the way the set defaults to a 16:9
setting with overscanning rather than defaulting to the pixel-for-pixel
Screen Fit option.

Having sorted out all these initial set up problems as best you can, though, the UE40ES7000’s pictures become very impressive. Black levels now look really pretty impressive; consistent across the screen, and relatively undamaged by the sort of grey or blue undertone in evidence if the backlight is too high.

It’s also nice not to see the sort of light ‘squares’ you get with some edge LED TVs – most notably those LG’s LM660T series and above, plus Panasonic’s WT50 series – that use local dimming.
The UE40ES7000 impresses, too, with its colours. They’re exceptionally punchy and dynamic, still look natural for the vast majority of the time, and also enjoy that subtlety of tone and blend that we always look for on premium sets. Some tones look a touch cool during dark scenes, perhaps, but this issue doesn’t crop up often, at least once you’ve reduced the backlight to a sensible level.

Also excellent is the sharpness of the UE40ES7000’s pictures. The set resolves all the fine details of good HD sources with aplomb so long as you haven’t got any noise reduction active, yet it also doesn’t leave sharp pictures looking too gritty or grainy (so long as you don’t use any of the set’s sharpness-boosting processing).

Playing a part in the image’s sharpness, too, is the screen’s impressive motion handling. The 200Hz screen’s native response time seems fast enough in itself to keep LCD’s common resolution loss issues to a minimum, while the Motion Plus processing system Samsung provides can help keep judder down too – though we wouldn’t generally recommend using this on anything higher than its relatively tame Clear level.

There is, though, one notable problem with the UE40ES7000’s mostly impressive post-calibration 2D pictures, namely a slight lack of brightness – especially when considered against the locally dimmed punchiness of Sony’s similarly priced 40HX853. Samsung currently only uses local dimming on its hugely expensive new 9000 series (look for a review soon), sticking with macro dimming on the UE40ES7000. Though to be clear, actually Samsung’s macro dimming system is arguably the best of its sort, aside perhaps from the version used on the recent Philips 46PFL8007.

Although we try to live mostly HD lives these days, it’s still difficult to totally avoid standard def. So it’s nice to find that the UE40ES7000 is very handy with SD material, adding sharpness and detail as it converts such sources to its full HD native resolution while simultaneously picking out and removing source noise. Colours survive the upscaling process reasonably intact, too.

Donning one of the two pairs of 3D glasses you get free with the UE40ES7000 quickly reminds us of just how far Samsung has come with its 3D experience. The set’s 3D images are consistently distinguished from those of many other 3D TVs by their sharpness, HD detail levels, bold yet also natural colours, motion handling, brightness and contrast. Many of these strengths, moreover, help the UE40ES7000 produce an excellent sense of depth and 3D space, even during dark scenes.

There are a couple of niggles, though. First, while the set generally suppresses crosstalk well, you can see whitish ‘shadows’ around some objects in the mid and far distance. This is much less distracting than the darker, more colour-imbued ghosting that normally constitutes crosstalk on 3D TVs, though.

The other issue is that since the TV needs to work harder in 3D mode to counter the dimming effect of the glasses, during very dark sequences you can see subtle jets of light shooting into the screen from its corners. You can remove these by reducing the set’s brightness, but you’ll probably be reluctant to do this given that you’ve already lost brightness via the glasses.

For the vast majority of the time, though, the UE40ES7000 produces a 3D picture that still looks excellent even in the context of all the other 3D TVs we’ve seen over the year.

The UE40ES7000 also works superbly as a gaming screen, since so long as you activate its Game picture preset (oddly buried away in the TV’s General system menu) it turns in a pleasingly low input lag figure of around 33ms.

Sonically the UE40ES7000 is too slim to produce a truly meaty, grunty audio performance of the sort demanded by a good action movie sequence. But it sounds pretty clear and detailed within the confines of its rather limited dynamic range, so while action scenes sound a bit thin, most other ‘day to day’ content sounds perfectly adequate.

The latest TVs from Sony and to a lesser extent Philips may have given Samsung a few things to think about for 2013. But even coming to the UE40ES7000 after seeing these new kids on the block, after a little calibration work it holds up very well in both feature and picture quality terms.