While it’s easy to get carried away by the 46in, 50in and even bigger 3D TVs that come our way in the course of our reviewing duties, it’s a simple fact that for most UK households, the 40-42in screen size is the biggest size they’ll contemplate. Which is why we anticipate that more than a few people will be interested in whether Samsung’s 40in feature-laden UE40D7000 delivers the goods…

Aesthetically it gets off to a near-perfect start, taking the idea that ‘less is more’ to a whole new level. For the UE40D7000 is pretty much just a screen, with practically no bezel. Barely a cm of frame sits round the screen – and even this puny bezel is transparent over much of its width, making it look even less obtrusive. Every year Samsung somehow comes up with a genuinely innovative design, it seems, but with this bezel-free effort it’s truly outdone itself. In fact, the design almost defies belief considering that the TV is driven by edge LED lighting. After all, for edge LED lighting to work, you need an edge, right?! 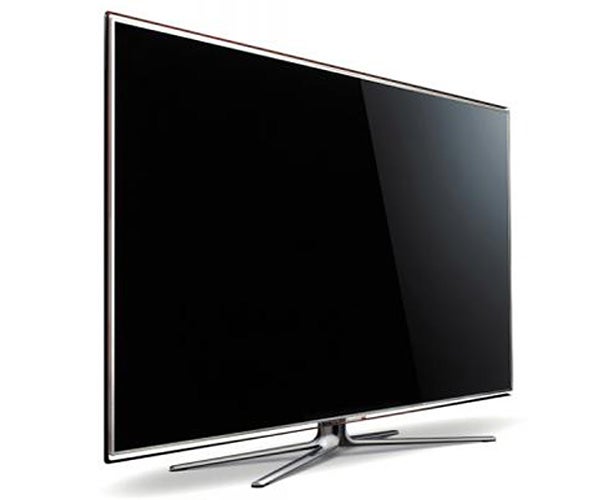 As with all edge-LED LCD TVs, the UE40D7000’s profile is impressively slender. Not quite as slender as last year’s Samsung models, perhaps, but this seems a more than fair trade for this year’s reduction in bezel width. After all, we don’t know about you, but we tend to watch our TVs from the front, not the back…

When it comes to connections, the UE40D7000 is every inch a premium model. Highlights include four HDMIs, three USBs, a D-Sub PC port, and a LAN port – though the set also carries built-in Wi-Fi if you’re geared up to use it.

As you can tell from this extensive suite of jacks, the UE40D7000 isn’t about to skimp on the sort of multimedia functionality that’s become such a big deal this year. The USBs, for instance, are able to play the vast majority of photo, music and video file formats, or else they can be used for adding a USB HDD ready for recording programmes from the built-in Freeview HD and Freesat HD tuners.

As for the LAN/Wi-Fi capabilities, they’re for either streaming stuff from a networked PC or accessing Samsung’s new Smart TV service. We’ve covered this online engine in depth a couple of times now – see, for instance, our review of the UE55D8000. So it doesn’t seem worth going into it in full again here. We will, however, cover the essential bits briefly for people who can’t be bothered to click to the other review.

First to grab your attention is a new, beautifully presented central hub menu screen, from where you can access all the TV’s AV inputs, multimedia file types, electronic programme guides, USB recordings, apps, video streaming services, an open Internet browser… pretty much everything, really. There’s even a universal search option on this hub that lets you look for content across every source on your TV – including the Internet at large, if you want.

Highlights of the new Smart service include LoveFilm, Yahoo, Skype, Acetrax, Twitter, Facebook, and GoogleMaps. There are also around 40 more niche gaming/information/news apps available as optional downloads. Currently these are all free, though you can bet that some you have to pay for will appear as the platform develops.

The UE40D7000’s specifications are impressive. In fact, unlike last year’s C7000 models, which represented a quite significant drop down in spec and performance from the C8000 series, the D7000 is actually identical in spec to the D8000 series. Its just that its design is a touch less opulent-looking, as it lacks the metallic flourishes of its slightly more expensive siblings. 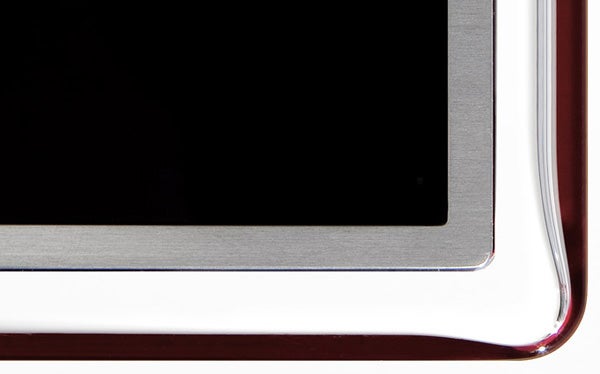 Among the feature highlights are Samsung’s ‘800CMR’ (Clear Motion Rate) system for enhanced motion fluidity and sharpness, local dimming of the edge LED lighting, and a very long list of picture tweaks. These include gamma controls, white balance adjustment, and a full colour management toolset. You can even manually set the amount of processing effort the set’s motion processing system applies to judder and blur reduction – a great touch given how tolerances to different levels of processing differ from person to person.

In action the 40D7000 is a mostly outstanding performer – the best 40in edge LED TV we’ve seen so far, in fact. The main reason we say this is that its black level response is so good, combining deep, genuinely dark black colours (with much less of the bluish tinge seen before from Samsung) with an impressively even brightness level right across the screen. There’s a tiny bit of extra glow in the set’s corners, but it really is only noticeable when there’s a very bright object in the centre of an almost totally dark backdrop – a scenario that only rarely crops up in normal viewing conditions.

What’s even better about the 40D7000’s deep black levels is that they’re achieved without compromising brightness anywhere near as much as you might expect. This means that images with a mixture of dark and light content look exceptionally dynamic and punchy for an LCD TV, as the set doesn’t seem to make as many compromises to brightness and black depth as most LCD TVs would with such tricky material.

Colours are outstanding too. There’s a touch too much blue around for our tastes using the set’s out of the box presets, perhaps, but this is easily rectified via the set’s excellent calibration tools. And after this small tweak, we were free to revel in a terrific combination of extremely punchy saturation levels, natural hues, and almost infinitely subtle blends and tonal shifts. It’s this latter touch of finesse, in particular, that tends to separate excellent TVs form merely good ones.

Yet more good news concerns the TV’s motion handling. For while the set needs to warm up for a few minutes before it’s at its best (a trait shared by many LCD TVs), once it’s firing on all cylinders it keeps a lid on blur without making film sources like Blu-rays look too much like video, and without introducing many distracting processing artefacts. 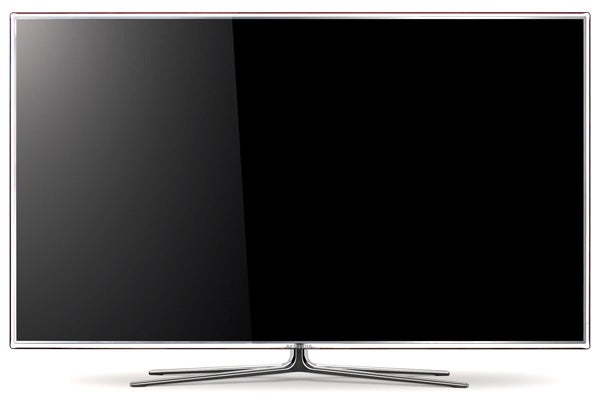 The only catch is that you can see some momentary ‘trailing’ while panning around when playing video games unless you set the motion processing on its highest level. But with the processing set this high, the gaming experience feels rather sluggish and unnatural. The best news in gaming terms is that we measured input lag at a respectable 40ms – though please note that you must have the screen in its game mode with as much other video processing turned off as possible to get these measurements. Using other presets pushes the input lag up over the 100ms level.

Where input lag isn’t such an issue as it is when playing games, setting the MotionPlus system to Clear and to better appreciate the 40D7000’s extremely impressive sharpness with high definition sources, plus, arguably even more impressively, its superb delivery of standard definition images. These look crisp and naturally coloured without tipping over into noise as less able upscaling engines can when trying to make standard def look as sharp as the 40D7000 does.

It probably hasn’t escaped your attention that we haven’t mentioned 3D yet. But don’t worry, that’s not because the 40D7000 has many problems in that area. As with the larger new Samsung screens we’ve tested, it’s immediately striking just how effective the 40D7000 is at producing the detail and depth present in a good-quality 3D Blu-ray transfer, thanks to a combination of the screen’s good 3D motion handling, big reduction in crosstalk noise compared with last year’s screens, and unusually high brightness level for an active 3D set. This helps colours look nearly as punchy as they do in 2D mode, while also bringing out exceptional amounts of shadow detail in dark areas. In this respect the 40D7000 outguns even Panasonic’s recently reviewed P50GT30.

However, while crosstalk is certainly much less of a problem for Samsung than it was last year, it still appears quite a bit more regularly than it does on Panasonic’s P50GT30 – and Panasonic’s L32DT30 LED 3D model, come to that.

One other philosophical point is that 3D inevitably doesn’t enjoy as much impact on a 40in screen as it does on bigger screens. But that’s not exactly the UE40D7000’s fault, really.

Finishing up with the UE40D7000’s audio, it’s not bad considering how slim the screen is. There’s certainly more power and clarity than we’ve heard from the past couple of Samsung flat panel generations, and even a touch of bass. There’s still a way to go, though, before we’ll be truly satisfied.

While Panasonic’s L32DT30 has proved that LCD can do active 3D without suffering as much crosstalk as you get with the 40D7000, overall Samsung’s latest 40 incher is still a superb LCD all-rounder that also just so happens to have excellent multimedia capabilities and one of the coolest designs ever.