While it isn’t a perfect performer, the UE32J6300 does a decent job in almost every picture area – even those perennially tricky (for budget LCD TVs) areas of black level response and motion clarity. This means it ends up producing a picture that’s exceptionally easy on the eye for the vast majority of the time, and which comfortably outperforms pretty much all of its 32-inch peers.

Once you’ve shifted the backlight setting down as described earlier, dark scenes enjoy black colours that at least approximate to black, with impressively little of the grey mist effect associated with screens that are struggling for contrast. 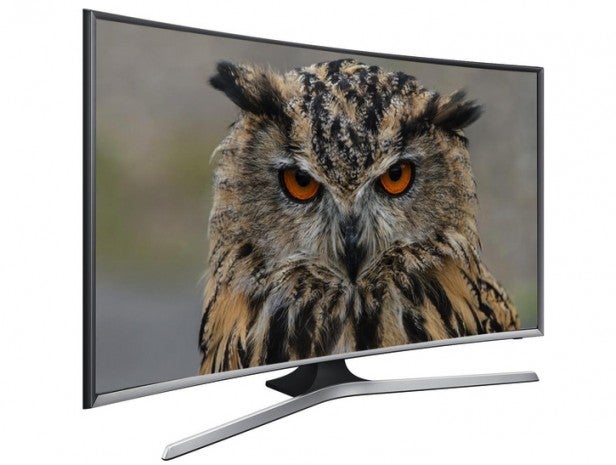 A passable amount of shadow detail is retained in dark areas too. This means that dark picture areas suffer less from the aggravating hollow look you often see in screens that don’t have the native contrast abilities present inside such VA-type panels as the UE32J6300.

With the backlight reduced to the recommended level, dark scenes are also impressively free of clouding inconsistencies.

Credible black colours are usually a prerequisite to believable TV colour performance, so it’s no great surprise to find that the UE32J6300 outperforms most of its peers in this area too. There’s an impressive combination of natural but also dynamic tones, and there’s more than enough subtlety in how the Samsung’s screen handles fine blends and tonal shifts to ensure that striping or blocking aren’t an issue either.

Skin tones look believable, rather than over-smooth and mannequin-like, while the subtlety of the colour rendering helps HD sources look detailed and textured beyond the levels typically seen on affordable HDTVs. At the same time, pictures don’t look over-sharpened to the point where edges start to look stressed or grain sets in. 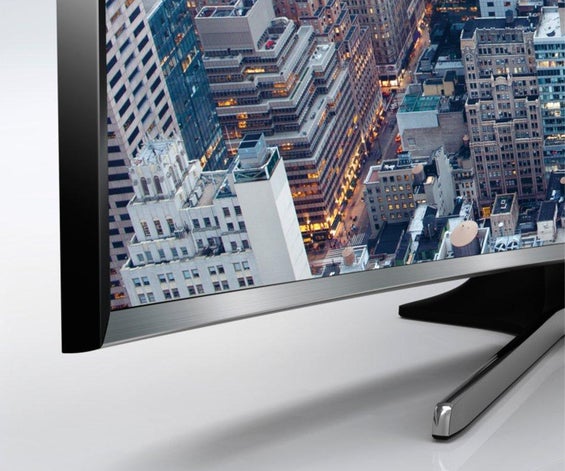 The clarity displayed by the UE32J6300 largely holds up when there’s motion in the frame too, without a trace of moire noise over the finest detailing.

Pictures look reasonably bright and dynamic for a small TV, making the set one of the better options out there for use in a bright room – so long as you can try to limit direct light sources bouncing off that curved screen, that is.

While this all sounds extremely positive, there are some relatively minor flaws to report. First, the backlight turns off completely when the image becomes extremely dark – a fade to black, for example. This naturally helps the screen to deliver a much deeper black colour, since there’s actually no light passing through the screen!

However, the moment where the backlight deactivates is obvious and, as a result, distracting. The same is true in the instance it flicks back on again, when enough light content is detected in the source image.

I was also sometimes aware of a slight dimness in each of the image’s corners. This was noticeable only in very bright shots – and, in fact, not even all such pictures. However, a test signal wasn’t needed to see it; the issue was visible during normal viewing conditions too. Shots containing almost pure white content also revealed a slight shadow down the full height of each side. 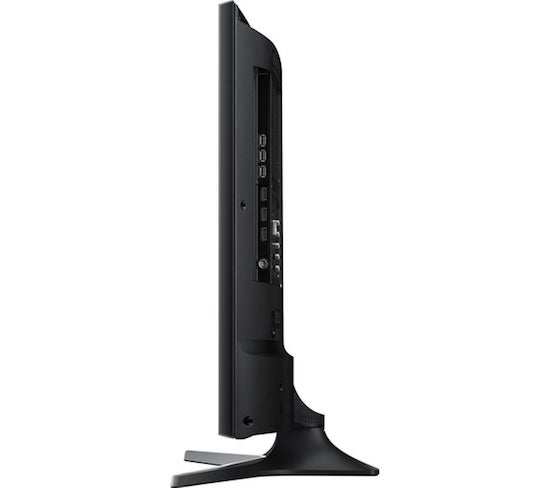 In addition, the UE32J6300’s viewing angle is very limited. This is in part because VA panels lose contrast and colour saturation when you get beyond a viewing angle of around 25 degrees, and also a result of the screen’s curve, which can start to affect image geometry quite significantly when you’re watching from beyond that 25-degree point.

This is a reminder to the fact that in order to gain any significant benefit from a curved screen, you really need to be sat in a quite specific sweet spot. When you’re talking about a screen as small as 32 inches, that sweet spot is really pretty slim.

Finally, if you’re likely to be placing the UE32J6300 more than a few inches away from a wall, note that its rear emits an unusual amount of stray light that can hit your wall quite distractingly during dark-room viewing. Although, I don’t imagine that this will be an issue that will affect many people.

Used as the main TV for the review period
Tested for more than a week
Tested using industry calibrated tools, discs and with real world use
Tested with broadcast content (HD/SD), video streams and demo discs
Previous
Samsung UE32J6300 Review Next
Sound and Conclusions Review